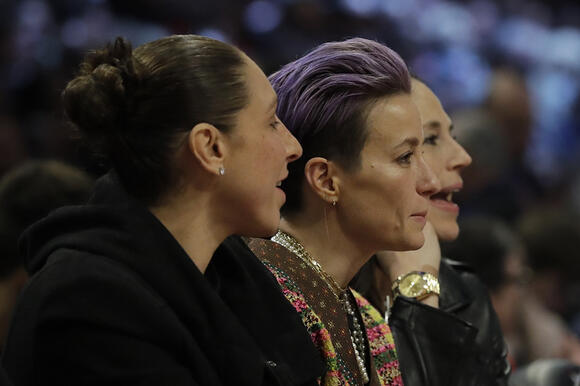 U.S. soccer star Megan Rapinoe was one of more than 500 female athletes who came together to stand up for women and abortion rights. On Monday, the group filed a briefing with the U.S. Supreme Court fighting against a Mississippi law that would ban all abortions after 15 weeks, except in cases of medical emergencies or a “severe fetal abnormality.”

The state had specifically asked the court to overrule its landmark decisions in Roe v. Wade, which granted women’s rights to access abortion with limited government interference.

“Women’s increased participation and success in sports has been propelled to remarkable heights by women’s exercise of, and reliance on, constitutional guarantees of liberty and gender equality, including the right to reproductive autonomy,” the women’s filing stated. “Continued access to, and reliance on, those rights will empower the next generation of girls and women to continue to excel in athletics and beyond, strengthening their communities and this nation… If women were to be deprived of these constitutional guarantees, the consequences for women’s athletics — and for society as whole — would be devastating.”

In addition to Rapinoe — who has been vocal on a myriad of inequalities in the United States — WNBA stars Diana Taurasi and Sue Bird signed the formal appeal as part of the Dobbs v. Jackson’s Women’s Health case. It was also signed by 26 Olympians, 73 professional athletes and 276 intercollegiate athletes.

The court announced on Monday that it would hear arguments concerning Mississippi’s 15-week abortion ban on Dec. 1.

The case is receiving national attention following Texas’ new abortion law — which bans abortions at about six weeks from the patient’s last menstrual period — went into effect earlier this month. In a vote of 5 to 4, the Supreme Court refused to block the law. Since then, 52 companies such as Yelp, Lyft, Ben & Jerry’s, Patagonia, Madewell, Bumble, Benefit Cosmetics, Stitch Fix and Everlane, signed an open letter through organization Don’t Ban Equality, stating: “… policies that restrict reproductive health care go against our values and are bad for business. It impairs our abilit y to build diverse and inclusive workforce pipelines, recruit top talent across states and protect the well-being of all the people who keep our businesses thriving day in and out.”

The Salvatore Ferragamo Group is bulking up its management team. Daniella Vitale will join the company as chief executive officer North America effective Oct. 18, while Vincenzo Equestre took on the position of CEO Europe, Middle East and Africa on Oct. 7. This marks a return to Ferragamo for Vitale,...
BUSINESS・5 DAYS AGO
Insider

A new statement signed by WNBA players is part of increasing efforts by athletes in women's sports to stand up for reproductive and healthcare rights.
TEXAS STATE・12 HOURS AGO

(The Center Square) – The U.S. Supreme Court began its fall term this week and faces a series of high-profile cases that could have impacts nationwide. The justices, who are returning to in-person meetings this term, will consider several major cases, including those touching on 2nd Amendment rights, abortion, and taxpayer funding for religious schools.
CONGRESS & COURTS・12 DAYS AGO
arizonadailyindependent.com

WASHINGTON – An abortion rights case that is a top issue in the U.S. Supreme Court term that began Monday has already drawn scores of legal filings – including from dozens of Arizona lawmakers, activists and advocates on both sides of the issue. The case at issue, Dobbs v. Jackson...
ARIZONA STATE・12 DAYS AGO
Los Angeles Times

The Supreme Court could reveal this year how far right it has moved.
LOS ANGELES, CA・13 DAYS AGO
NBC News

The U.S. Supreme Court begins a new term, one that will be dominated by issues such as abortion, gun rights and religion. NBC News’ Pete Williams breaks down what’s on the docket and how the rulings could impact the country. Oct. 4, 2021.
CONGRESS & COURTS・13 DAYS AGO

NEW YORK — The highest court in the United States returned to session Monday, and several controversial topics — religion, guns and abortion, among them — top the Supreme Court’s docket. When it comes to women’s reproductive rights, a case from Mississippi presents a direct challenge to the court’s major...
NEW YORK CITY, NY・13 DAYS AGO
Business Insider

The Supreme Court term started on Monday. The biggest case on the docket concerns abortion. The dispute involves a Mississippi law that bans nearly all abortions after 15 weeks of pregnancy. The court will hear arguments on the case on December 1. The Supreme Court kicked off its new term...
CONGRESS & COURTS・13 DAYS AGO
CBS Pittsburgh

PITTSBURGH (KDKA) — The first Monday in October is the traditional opening of the U.S. Supreme Court, and this session of the court could be one of the most controversial in years. The Supreme Court is the last word on judicial cases, which is why between 8,000 and 10,000 cases get appealed to the high court every year. But in recent years, the Supreme Court has cut back the number of cases it actually considers to about 60 to 70 cases, most of which are controversial and significant This is the first full term where six of the nine justices are appointed...
PITTSBURGH, PA・13 DAYS AGO
WRIC - ABC 8News

Several states are asking the justices to reconsider Roe v. Wade – the landmark 1973 ruling that established the constitutional right for a woman to terminate a pregnancy, regardless of the moral beliefs of other citizens.
CONGRESS & COURTS・14 DAYS AGO

The Supreme Court is slated to decide on cases related to several hot-button issues during the term that begins Monday, including abortion, gun rights, and school vouchers. On Dec. 1, justices will hear arguments in Dobbs v. Jackson Women’s Health Organization, which challenges a Mississippi law that bans most abortions when "the probable gestational age of the unborn human" is more than 15 weeks. Detractors claim a ruling in favor of the law could undermine or even lead to the overturning of Roe v. Wade.
CONGRESS & COURTS・14 DAYS AGO
Business Insider

Democrats should be able to appoint a judge to replace the 82-year-old Breyer or the conservative supermajority will get even stronger.
CONGRESS & COURTS・7 DAYS AGO
arcamax.com

A woman seeking to end a pregnancy in Kentucky after 14 weeks has one choice: She enters a brick building on the edge of downtown Louisville after running a gantlet of abortion opponents determined to change her mind. Patients coming to the EMW Women’s Surgical Center on a recent Tuesday...
LOUISVILLE, KY・7 DAYS AGO
Newsweek

The commission said the proposal of imposing term limits on Supreme Court justices had "the most widespread and bipartisan support."
CONGRESS & COURTS・2 DAYS AGO

In a recent speech, Justice Clarence Thomas criticized the media and interest groups for suggesting judges play politics with their cases. “So if they think you are anti-abortion or something personally, they think that’s the way you always will come out,” the 73-year-old Supreme Court justice said. “They think you become like a politician. That’s a problem. You’re going to jeopardize any faith in the legal institutions.”
CONGRESS & COURTS・13 DAYS AGO
WJCL

A Legal Expert on the Supreme Court’s Upcoming Abortion Case

The Supreme Court has upheld Roe v. Wade and a women’s right to an abortion for decades. However, the conservative majority court appears to now be reexamining that right. Amy Howe is a legal expert who covers the Supreme Court and is the co-founder of SCOTUSblog. She walks us through what justices will need to consider.
CONGRESS & COURTS・14 DAYS AGO
Business Insider

The Biden administration announced on Friday it would ask the Supreme Court to throw out a Texas law that bans almost all abortions after a federal appeals panel allowed the restrictions to stay in place. Texas clinics are running out of options as they try to beat a ban on...
CONGRESS & COURTS・2 DAYS AGO