By Emily Brooks
WashingtonExaminer
26 days ago 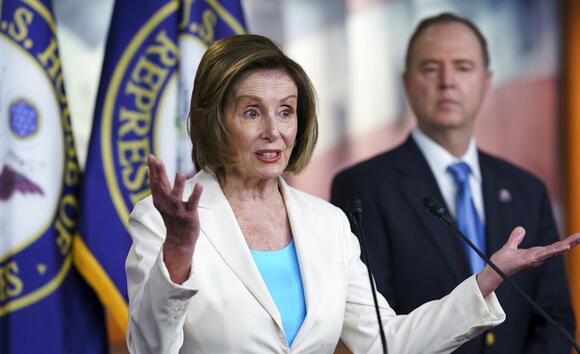 H ouse Democrats introduced legislation on Tuesday that aims to curb presidential powers by addressing a laundry list of issues and complaints that came up during former President Donald Trump’s norm-shattering presidency.

“Donald Trump made this legislation a necessity, but this is bigger than about any one particular president,” said California Rep. Adam Schiff, the lead sponsor of the Protecting Our Democracy Act. “The former president trampled many of our sacred norms and institutions, violating laws and breaking long-standing precedent with shocking ease.”

Sweeping reforms in the bill adjust requirements and restrictions regarding compliance with congressional subpoenas and pardons, the independence of inspectors general, and transitions in presidential administrations, among other measures.

In one sense, the bill marks an acknowledgment by the House that presidential power has expanded too much over the last several decades.

TOP DEMOCRATS: ‘THE VOTES WILL BE THERE’ FOR BIDEN’S EMBATTLED SPENDING PACKAGE

“There's been a slow movement, but it picked up steam” under Trump, said House Speaker Nancy Pelosi. “Our founders in their wisdom to have checks and balances and separation of power, and they had guardrails for the president. And one of them was the Congress of the United States.”

Almost all of the bill’s many provisions have some connection to a scandal or frustration that surfaced during Trump’s presidency.

The bill would make the president and vice president eligible to be criminally charged, taking aim at long-standing Department of Justice policy stating that the president cannot be indicted while in office. That made impeachment the only remedy to punish Trump after he was accused of obstructing special counsel Robert Mueller’s inquiry into Russian meddling in the 2016 election.

Presidential and vice presidential candidates would be required to release 10 years of personal tax returns under the bill, something Trump never did.

It would also prohibit presidential “self-pardons” — a topic that Trump reportedly explored. And in aiming to curb pardons being used as a form of bribery, it would define a pardon as a “thing of value.” The Department of Justice would also be required to provide Congress with materials relating to presidential pardons of relatives or face charges of contempt of Congress or obstruction of Congress.

And in response to the Trump administration stonewalling President Joe Biden’s transition team as the former president fought to overturn the election, the bill would require the administrator of General Services to treat each eligible presidential candidate as a winner, if no winner can be ascertained five days after the general election, until an ascertainment is made or a winner is certified by Congress.

Congressional Democrats communicated with the White House while crafting this session’s version of the legislation and made some changes accordingly.

“We made changes, for example, to some of the provisions that individually penalize people for refusing to comply with congressional subpoenas,” Schiff said. “President Biden has acknowledged the central importance of these kinds of reforms both in his campaign and during his presidency.”

Schiff said he expects a vote on the bill sometime this fall but demurred when asked about his communications with Republicans and the bill’s chances of getting support from 10 Senate Republicans in order to overcome a filibuster in the upper chamber.

“One step at a time,” Schiff said.

the one law that needs to be passed is one limiting terms for members of congress and the senate. People have no business being lifetime congressmen!

Her attitude needs a definite adjustment. She wants to put a stop to everything that would take away what a President with a "set" could do to set this Country back on the right track without her permission.

great so they are going after Biden also as he has broke more laws than Trump could even think of. The Democratic Party is a machine and does not have any concerns for we the people. They just want power and they don't want a outsider in that knows about their schemes.

"Not only the deposition of the president himself, but records related to him. Whether those be cellphone, Twitter accounts, communications with individuals," said Democratic Rep. Stacey Plaskett.
POTUS・22 HOURS AGO
Newsweek

"That's not necessarily something we want to do up front…but if he has pieces of information we need, we certainly will," said the Illinois lawmaker.
CONGRESS & COURTS・2 HOURS AGO
Newsweek

The former president has now lost the popular vote in two consecutive elections and could struggle to win in 2024.
PRESIDENTIAL ELECTION・1 DAY AGO
Business Insider

Democrats mock Donald Trump over Virginia governor race, flying a plane with a banner near Mar-a-Lago

“I like kids better than people,” President Biden said Friday after getting a hug from a toddler in Connecticut while nearby protesters bellowed, “F–k Joe Biden.”. “When I talked to all your folks out on the playground, I joked that everybody knows I like kids better than people. Fortunately they like me. That’s why maybe I like them,” Biden said during a speech in Hartford.
PRESIDENTIAL ELECTION・1 DAY AGO
Washington Examiner

More evidence emerges that Attorney General Merrick Garland has allowed the Department of Justice to become outrageously politicized on behalf of liberal interests. Indeed, the nation’s chief law enforcement officer is breaking the law. Nine months into the Biden presidency, Garland has yet to comply with a perfectly legitimate order...
U.S. POLITICS・4 HOURS AGO
MSNBC

In House subpoena fight, Steve Bannon may best Democrats without a winning argument

Now for another episode of the show I like to call “Steve Bannon Vs. the Law.” Like previous episodes, Bannon may have a weak legal argument but still come out triumphant — as in season one, when he was pardoned by then-President Donald Trump, for allegedly defrauding Trump’s own supporters.
CONGRESS & COURTS・1 DAY AGO

(Washington) — If the Republicans take the House back in the 2022 midterm elections, they get to pick a speaker, and there’s no requirement that the speaker has to be an elected representative. “Can you just imagine Nancy Pelosi having to hand that gavel to Donald J. Trump?” mused Rep....
U.S. POLITICS・1 DAY AGO
The Associated Press

Trump’s not going away — and neither is investigator Schiff

WASHINGTON (AP) — Nearly a year out of the White House, Donald Trump continues to circle the Republican Party, commanding attention and influence as he ponders another run for the presidency. And still circling Trump is Rep. Adam Schiff. Schiff, the Intelligence Committee chairman who rose to national prominence probing...
POTUS・1 DAY AGO
POLITICO

“I don’t know if autocracy is purely the domain of Donald Trump,” he said.
PRESIDENTIAL ELECTION・2 HOURS AGO
The Guardian

Jeffrey Clark, a former top environmental lawyer at the Trump justice department accused of plotting with Trump to undermine the 2020 election results in Georgia and other states, is facing ethics investigations in Washington that could lead to possible disbarment, as well as a watchdog inquiry that might result in a criminal referral.
PRESIDENTIAL ELECTION・12 HOURS AGO

The longtime nemesis of the former president made the claims while speaking to the "Sway" podcast.
NEW YORK CITY, NY・2 DAYS AGO
Business Insider

The Renew America Movement is urging moderate Republicans to support Democrats as part of a bid to defeat the pro-Trump GOP.
U.S. POLITICS・2 DAYS AGO
WashingtonExaminer

Republicans for Voting Rights, an organization operating under the Defending Democracy Together, has launched a quarter-million-dollar campaign to erect dozens of these billboards in major markets across the country.
PRESIDENTIAL ELECTION・2 DAYS AGO

WASHINGTON, Oct 15 (Reuters) - U.S. President Joe Biden said on Friday the U.S. Justice Department should prosecute people who defy subpoenas to testify before a congressional select committee probing the deadly Jan. 6 assault on the Capitol. "I hope that the committee goes after them and holds them accountable,"...
CONGRESS & COURTS・1 DAY AGO
New York Post

The week in whoppers: Nancy’s attack on the media, the NYT’s hit on Kyrsten Sinema and more

We say: That Washington Post headline Thursday paints Republicans as the bad guys in the supply-chain crisis, which has scores of ships — carrying 250,000 containers of merchandise — lined up waiting to be unloaded outside US ports, slowing deliveries and fueling inflation. As if President Biden bears no responsibility. Yet it was Biden and fellow Democrats who juiced up demand for new goods by injecting trillions into the economy. And at the same time they paid workers bonuses for not working. Nor did they act as the crisis built all year. And now they want to spend trillions more (much of it in borrowed money), further heating up demand. But, hey: The GOP has no right to “pounce.”
POLITICS・2 DAYS AGO
The Independent

Donald Trump has become the favourite to win the election in 2024, as Joe Biden falls behind the former US president and faces challenges with his domestic agenda. Mr Trump, according to betting odds, had been ahead in the race for the Republican nomination in 2024 but had not been on odds for a win in the election.However, recent odds byBetfair Exchange found Mr Trump is now 4.8 to win in 2024. Mr Biden, meanwhile, was at 5.1 after falling behind his own vice president, Kamala Harris, in the presidential tie-up. Although neither Mr Trump nor Mr Biden have...
PRESIDENTIAL ELECTION・2 DAYS AGO
WashingtonExaminer

Federal Communications Commission acting Chairwoman Jessica Rosenworcel is not expected to be nominated by President Joe Biden to serve in the role on a permanent basis, people familiar with the matter said, because she is not liberal enough for the administration.
PRESIDENTIAL ELECTION・7 HOURS AGO