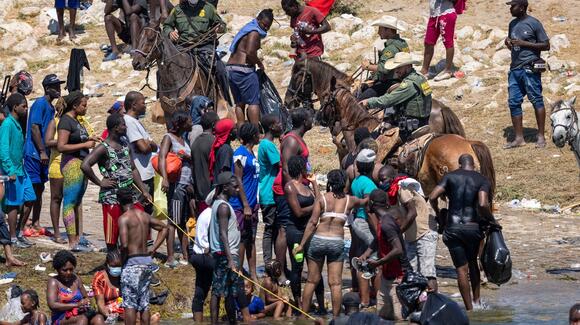 DEL RIO (CBSDFW.COM) — The office of Governor Greg Abbott said the Governor will hold a press conference to provide a border security update at the international bridge in Del Rio on Tuesday, September 21. CBSN DFW will carry that press conference live when it begins on this page.

Ones For Texas: Say Thanks To Non-Profit Organizations During 'North Texas Giving Day'

Earlier this week, Texas Governor Greg Abbott sent a letter to President Joe Biden requesting an emergency declaration for the state as a result of the escalating crisis at the Texas-Mexico border.

The letter specifically noted the situation in the Val Verde County city of Del Rio, which they called ‘dire’. Thousands of migrants — mostly from Haiti — have converged on the city about 145 miles west of San Antonio.

According to the latest Customs and Border Protection figures, more than 29,000 Haitians have arrived over the past 11 months. Some 12,000 of those are in South Texas, living in a makeshift camp near and under the Del Rio International Bridge.

Mass deportations for those migrants are underway, with more than 300 Haitians already flown back to their home country on Sunday.

Abbott says the surge in asylum seeks in Del Rio is posing, “… life-threatening risks to residents of Val Verde County and is quickly overrunning law enforcement and health care and humanitarian resources.”

Trump had this problem so fixed and then the vegetable was elected and ruined it!

AUSTIN (CBSDFW.COM/AP) — In a late night session, Texas Republicans approved redrawn voting maps that favor incumbents and decrease political representation for growing minority communities. The maps were approved following outcry from Democrats over what they claimed was a rushed redistricting process crammed into a 30-day session, and one which...
TEXAS STATE・2 DAYS AGO
CBS DFW

AUSTIN, Texas (CBSDFW.COM) – Amid a bitter fight over redistricting, the third special session of the Texas Legislature ended early Tuesday morning, Oct. 19 after lawmakers approved a variety of bills with bipartisan support. Lawmakers voted to increase the homestead exemption on school property taxes from $25,000 to $40,000. That would save an average homeowner about $175. State Representative Chris Turner, D-Grand Prairie, who serves as the Chair of the House Democratic Caucus praised the bill, SB 1. “I was glad to see that and this is a priority that Democrats have championed for years, every session, Democratic members of the State House have...
AUSTIN, TX・1 DAY AGO