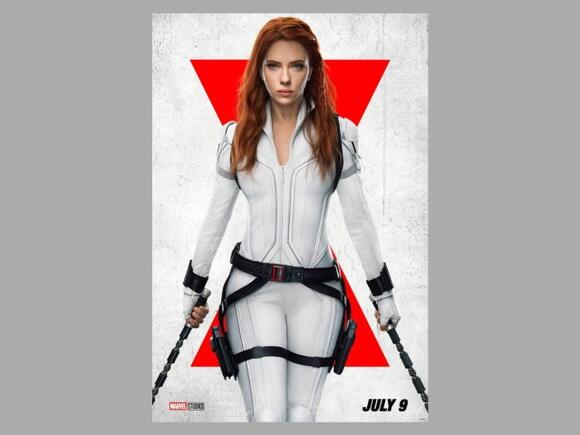 Here are this week's hottest home video releases. Find them on disc, or streaming services such as iTunes, Vudu, Amazon and Google Play.

The long-delayed spotlight on Scarlett Johansson's femme fatale assassin character finally gets its due. Unfortunately, the film wasn't quite worth the wait. Decent action scenes and a sparkplug performance from Johansson go largely to waste in the slow-moving, mirthless drama. For my full review, click here. Extras include deleted scenes, bloopers and a slew of making-of featurettes.

An over-the-top Emma Stone sinks herself into the role of Cruella De Vil, villain in the "101 Dalmations" series. Cheeky humor and lavish costuming bolster the film, but the overly complicated story is wince-inducing at times. Superfans of the character and series will get the most out of this one. Bloopers, deleted scenes and scene and set breakdowns highlight the slate of extras.

The ninth entry in the "Fast and the Furious" series delivers the usual high-octane fireworks, even as the action scenes continue to ratchet up beyond the previous ludicrous level. Vin Diesel, John Cena, Michelle Rodriguez, Tyrese Gibson, Charlize Theron and Jordana Brewster lead the cast. Extras include making-of featurettes, filmmaker commentary and a gag reel.

See What Elvira, Mistress Of The Dark, Looks Like Now

You may remember watching Elvira, Mistress of the Dark, on Elvira’s Movie Macabre each week. Elvira was played by Cassandra Peterson and you won’t believe what she looks like in real life! Cassandra has admitted in the past that she always loved the horror movie genre. When she was a kid, she would much rather play with horror-themed toys instead of Barbies. Later, she worked as a go-go dancer before she started working as an actress.
MOVIES・27 DAYS AGO
Inside the Magic

It has been nearly 12 years since beloved actress Brittany Murphy died unexpectedly, and now a new documentary is detailing the chilling details of her final days. The film is titled What Happened, Brittany Murphy?, set to debut Oct. 14, on HBO Max. In the documentary, several people from Murphy's life are interviewed about the late star — PEOPLE reports — including Makeup artist Trista Jordan, who worked with her on 2009's Something Wicked, Murphy's final film. "Her eyes were so sunken, and she just seemed so sad," Jordan recalled. "She wasn't herself. She was in so much pain. She had Bambi legs and couldn't stand up."
MOVIES・11 DAYS AGO

“Black Panther” and “Mangrove” actress Letitia Wright ignited an anti-vax controversy last December after sharing a video that questioned Covid-19 vaccines. Wright was labeled anti-vax across social media after sharing on Twitter a 69-minute YouTube video featuring Light London Church leader Tomi Arayomi. The actress included the prayer hands emoji as a caption. The video found Arayomi questioning the legitimacy of the Covid-19 vaccine. Wright initially responded to the backlash by posting: “If you don’t conform to popular opinions. but ask questions and think for yourself….you get cancelled.” A new report on Hollywood’s response to the Coronavirus vaccine published by The...
MOVIES・12 DAYS AGO
digitalspy.com

M Night Shyamalan has announced the title and release date for his upcoming new horror movie. The Old direct took to Twitter on Thursday (October 14) to share an ominous video without any caption. In the short clip, which you can check out above, you can hear three knocks on...
MOVIES・3 DAYS AGO
MovieWeb

Today DC released a new tease for the upcoming Robert Pattinson movie The Batman ahead of the new trailer dropping at this weekend's DC FanDome event. The teaser lives up to that name as it is very short, but it does give an ominous sense of darkness that we have been promised from this latest iteration of the Dark Knight, and features a solitary Bat Signal being projected in deep red into the sky, while announcing the trailer's imminent arrival on October 16th and comes with the phrase, "It's not just a signal; it's a warning," which is said by Robert Pattinson in full Batman voice.
MOVIES・4 DAYS AGO
Cinema Blend

When the current golden age of comic book movies began, you’d think Angelina Jolie would be one of the first actresses Hollywood would have called. And yet, she is entering the MCU almost fifteen years after it began. Oh, and she’s not even playing the most iconic heroes like Wonder Woman or Black Widow. Jolie will play Thena in Eternals next month, and ahead of its release, she’s sharing why now was the right time to step into the genre.
MOVIES・13 DAYS AGO

Scarlett Johansson has "amicably" settled her lawsuit against Disney and announced a new movie with the company. The ‘Black Widow’ star filed papers to sue Disney in July for an alleged $50 million in lost earnings, as she claimed their decision to release the Marvel movie on Disney+ at the same time as its theatrical release violated the terms of their contract and impacted negatively on her salary.
CELEBRITIES・18 DAYS AGO
MovieWeb

The Batman Vs. Catwoman Fight Footage Revealed as New Trailer Is Confirmed for DC FanDome

You're not going to want to miss DC FanDome next weekend as it's been officially confirmed that the event will host the next full trailer for The Batman. Last year, the first-ever DC FanDome was launched, presenting sneak peeks at a variety of some of the most popular upcoming titles. Perhaps the biggest reveal of all was a new trailer for The Batman that was filled with all kinds of amazing footage. It was remarkable to see as at the time, the project was still pretty early into filming.
MOVIES・12 DAYS AGO
The Spokesman-Review

What’s new for home viewing on Video on Demand and Netflix, Amazon Prime, Hulu, Disney+, HBO Max and other streaming services. Scarlett Johansson reprises her role as Natasha Romanoff in “Black Widow” (2021, PG-13), a superhero adventure as a conspiracy thriller that sends Romanoff looking into her past. Previously a premium rental, it now streams for subscribers. (Disney+)
MOVIES・11 DAYS AGO
CNET

It's been 20 years since wrestler The Rock burst onto screens as the villainous Scorpion King, and now Dwayne Johnson is playing the bad guy again. In the first Black Adam footage, unveiled at DC Fandome on Saturday, Johnson takes on the power of Shazam as one of DC comics' baddest bad guys. "The truth is I was born to play Black Adam," Johnson said at the virtual fan event before the footage played, promising viewers huge action sequences and "breathtaking 'holy shit' scenes."
MOVIES・2 DAYS AGO

Netflix selectively reveals viewing information when the results are good. More and more stars are pressing the issue, like Kevin Hart did on Fatherhood and Ryan Murphy on Ratched. Such is the case this morning with Jake Gyllenhaal, divulging the stats on The Guilty, the movie he made in lockdown with his Southpaw director Antoine Fuqua. According to Gyllenhaal, the film — shot over 11 days, with Fuqua working from a trailer after someone in his circle tested positive for Covid — will be seen in 69 million households in its first four weeks, and has been the streamer’s top movie in 91 countries. Gyllenhaal plays a 911 dispatcher with a sketchy past who tries to help a woman kidnapped by her husband, leaving her children in danger. Pic opened limited in theaters September 24, and on Netflix beginning October 1. It’s a Nic Pizzolato-scripted remake of the Danish film Den Skyldige. View this post on Instagram A post shared by Jake Gyllenhaal (@jakegyllenhaal)
MOVIES・23 HOURS AGO
TVGuide.com

It's time to stop peering into other people's windows to see what they're watching on Netflix. If you want to know which movies are popular, just check out Netflix's Top 10 list of movies. The Netflix Top 10 Movies list for Tuesday, Oct. 12 adds a new film unsuitable for anyone except the most hardcore fans of LOL Dolls. LOL Surprise: The Movie debuts at No. 6, and we'll all be punished for it by whatever higher being is out there judging us. The Guilty, Jake Gyllenhaal's thriller about a 9-1-1 operator, stays at No. 1, followed by the interminable classic Titanic. Also new to the list is the 1995 film Jumanji, starring Robin Williams.
MOVIES・6 DAYS AGO
Rolling Stone

‘Black Widow’ Is Finally Available For Everyone On Disney+

Before she was ever fighting alongside the Avengers, Natasha Romanoff had a long uncovered history. Now, the Marvel superhero known as “Black Widow” gets to tell her story, with the release of Black Widow on Disney+. One of most-anticipated films of the year, Black Widow arrived nearly 11 months after it was originally scheduled for release. Postponed due to Covid, the Marvel blockbuster premiered on Disney+ with Premier Access, and in movie theaters across the country. Now,  Black Widow will be available to stream for all subscribers on Wednesday, October 6. The film didn’t come without its moment of controversy — Scarlett Johansson...
MOVIES・12 DAYS AGO
Rolling Stone

There Are Crazed, Manic Cult Movies — and Then There’s ‘Possession’

There is a pantheon for over-the-top screen performances, one that dates back to the silent era and has room for everyone from an unmasked Lon Chaney to a covered-in-bees Nicolas Cage. In the center of this Hall of Fame, however, sits a French actress, her pale blue eyes widened, her head tilted and her mouth opened as if she’s about to scream. The rest are in awe of her, and give her a wide berth; she appears to be a woman not on the verge of a nervous breakdown but deep into an-already-in-progress one. You could point to a number...
MOVIES・2 DAYS AGO
The Independent

Warner Bros. has unveiled its trailer for “The Batman,” which features Robert Pattinson’s first bone-crunching turn as a DC Comics superhero.The trailer unveiled Saturday at the DC Fandome event shows Pattinson’s Dark Knight methodically taking down bad guys despite being outnumbered and his Batsuit absorbing multiple bullets.The footage teases a dark, bleak and violent version of Batman, with Pattinson’s voice saying about the Bat-Signal: “Fear is a tool. When the light hits the sky, it’s not just a call. It’s a warning.”The trailer teases multiple iconic characters, including Zoe Kravitz’s Catwoman, Colin Farrell as The Penguin and Batman’s muscle car Batmobile tearing up the streets and emerging from explosions unscathed.The trailer opens with a scene of police arresting a man in a cafe. The milk in his coffee is swirled into a question mark, the calling card of Batman’s nemesis The Riddler.Later in the footage, Pattinson’s voice is heard describing the situation in Gotham City: "This is a powder keg. The Riddler’s the match.”"The Batman” will be released in theaters on March 4.
MOVIES・2 DAYS AGO
Variety

John Cena strips once again to his skivvies as a homicidally misguided costume vigilante in the first trailer for the HBO Max series “Peacemaker,” which debuted on Saturday as part of the virtual fan event DC Fandome. “Peacemaker,” the spin-off series from the August feature film “The Suicide Squad,” will premiere on the streaming service on Jan. 13. It was created and written by the film’s director, James Gunn. The show follows Cena’s Christopher Smith after the events of “The Suicide Squad,” in which Smith, aka Peacemaker, was nearly killed after betraying his team for what he believed to be the greater...
TV & VIDEOS・2 DAYS AGO
Variety

Marvel fans, prepare to wait a little bit longer to see Doctor Strange, Thor and Black Panther return to theaters. Disney has delayed release plans for several upcoming films, including “Doctor Strange in the Multiverse of Madness” from March 25 to May 6, “Thor: Love and Thunder” from May 6 to July 8 and “Black Panther: Wakanda Forever” from July 8 to Nov. 11. With the “Black Panther” sequel jumping to November, “The Marvels” has been postponed to early 2023 and “Ant-Man and the Wasp: Quantumania” was bumped from Feb. 17 to July 28, 2023. Along with the deluge of Marvel delays,...
MOVIES・23 HOURS AGO