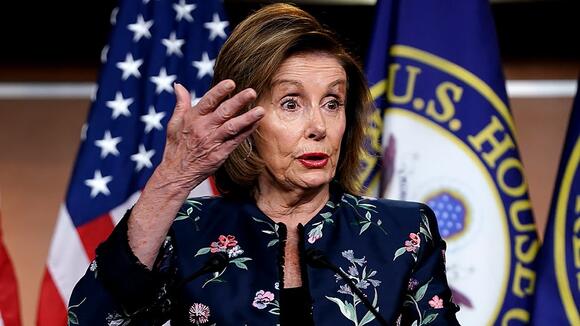 House Democrats unveiled legislation on Tuesday that would keep the federal government funded through Dec. 3 and suspend the debt limit into next year as the deadlines to avert both crises loom in a matter of days.

The bill is expected to hit the House floor for a vote later Tuesday.

Republicans have been adamant that they won’t back a debt limit suspension as a form of protest against Democrats’ $3.5 trillion bill to expand social safety net programs.

While the bill tying a suspension of the debt limit through December 2022 to avoiding a government shutdown is expected to easily pass the House, it appears to lack the votes in the Senate where at least 10 Republicans would have to join with all Democrats for it to pass.

The bill also includes $28.6 billion to address recent natural disasters, including for Hurricane Ida, which recently ravaged the South and the East Coast. That may draw the support of some Republicans who want to ensure that disaster aid arrives to their districts in a timely fashion, but likely won’t draw a majority of the GOP.

Another $6.3 billion in the bill would provide funding to temporarily provide shelter for Afghan refugees at U.S. facilities and in foreign countries, as well as for resettlement efforts.

The temporary stopgap bill to avoid a government shutdown on Oct. 1 would mean that lawmakers will be haggling over long-term spending close to the end of the year, using the December holidays as a way to pressure themselves to make a deal in a timely fashion.

“By extending funding through December 3, this legislation will allow Congress to negotiate full-year government funding bills that make historic and transformative investments to benefit working families. As we take that step today, providing help for people in desperate need is a moral imperative,” House Appropriations Committee Chairwoman Rosa DeLauro (D-Conn.) said in a statement.

Democrats in the state House of Representatives are calling for the release of more than $350 million in federal COVID-19 relief aid. That money is from a December 2020 stimulus package. Leadership is characterizing that money as being tied up in Washington D.C., waiting for the state to officially accept...
CONGRESS & COURTS・1 DAY AGO
WashingtonExaminer

Senate Republicans on Wednesday blocked the advancement of the Freedom to Vote Act, one of three major voting bills brought forward by Democrats in Congress this year.
PRESIDENTIAL ELECTION・3 DAYS AGO
FOXBusiness

Washington D.C. has been at the focus of many news stories the past weeks ranging from having funding to continue operating to lifting the debt ceiling. There are four legislative pieces moving at the same time. The first was authorizing the government to operate financial beginning Oct. 1, 2021, the start of the nation’s fiscal year. In theory, a budget for the year that began Oct. 1 should have been passed by now, but it seems that hasn’t happened. (It hasn’t happened for years no matter who was in the White House or Congress.) So Congress approves things called “continuing resolutions” that allow it to continue operations at previous levels.
CONGRESS & COURTS・5 DAYS AGO

The U.S. House of Representatives voted Tuesday along party lines 219-206 to temporarily extend the federal debt limit to early December. With the Democrat-controlled Congress now having reached a short-term agreement to increase the nation’s debt ceiling, the measure now heads to the desk of President Joe Biden for his signature.
CONGRESS & COURTS・10 DAYS AGO
bondbuyer.com

The House Tuesday approved a bill to raise the debt ceiling for two months, likely queuing up another political battle in December. The measure lifts the debt limit by $480 billion, to nearly $28.9 trillion, and ensures that the U.S. can continue to pay its bills through early December and maybe through early 2022. Economists had warned that failure to do so would lead to economic disaster, likely plunging the U.S. into a recession.
CONGRESS & COURTS・10 DAYS AGO

Last night the House of Representatives approved the extension of the nation’s debt limit through December. Last week the Senate passed the agreement to increase the ceiling by $480 billion which was how much the Treasury Department told Congress it would need to get to December 3rd after Senate Majority Leader Chuck Schumer announced that it reached a deal making it possible for lawmakers to vote on the deal.
CONGRESS & COURTS・10 DAYS AGO
USA TODAY

House votes to raise debt ceiling, sending bill to Biden and setting up another fight over borrowing limit

WASHINGTON – The House passed legislation Tuesday raising the nation's debt ceiling for several weeks, allowing the government to keep paying its bills into early December and avoiding the economic chaos that would come if the U.S. defaulted. By extending the nation's borrowing limit for a few weeks, lawmakers set...
PRESIDENTIAL ELECTION・11 DAYS AGO
wibqam.com

WASHINGTON (Reuters) – The Democratic-controlled U.S. House of Representatives is expected on Tuesday to give final approval to a Senate-passed bill temporarily raising the government’s borrowing limit to $28.9 trillion, putting off the risk of default until early December. Democrats, who control the House by a mere four-vote margin, were...
CONGRESS & COURTS・11 DAYS AGO
okcfox.com

OKLAHOMA CITY (KOKH) — The U.S. House on Tuesday is set to take up a Senate-passed bill that would extend the debt limit through early December. It will be the third time the House has voted on raising the debt ceiling, and each time, Oklahoma Congressman Tom Cole has voted against it. He, like other Republicans in Congress, say Democrats should go it alone if they plan to spend trillions of dollars.
CONGRESS & COURTS・11 DAYS AGO

Failure to raise the debt ceiling would likely lead to a recession, Treasury Secretary Janet Yellen warned Sunday, but she's confident that House Speaker Nancy Pelosi and Senate Majority Leader Chuck Schumer can avert that. "I have confidence that Speaker Pelosi and Leader Schumer will be able to manage this...
CONGRESS & COURTS・13 DAYS AGO
New York Post

President Biden’s top legislative priority is getting slimmer as Democratic infighting over his massive social spending bill continues. Biden’s original $3.5 trillion budget plan, packed with programs that have long been on the progressive wish list, is now expected to cost $2 trillion over the next 10 years, according to reports.
PRESIDENTIAL ELECTION・16 HOURS AGO
Fox News

A national park in House Speaker Nancy Pelosi's San Francisco district that is set to receive $200 million from taxpayers includes several Pelosi donors on its trust board, Fox News has learned. House Democrats' proposed $3.5 trillion spending bill includes $200 million earmarked for the Presidio national park, which has...
CONGRESS & COURTS・1 DAY AGO
The Guardian

Democratic lawmakers, with President Joe Biden ’s support, are drawing up details of a plan to tax billionaires and other ultra-high earners after Senator. ’s opposition to raising the rate on corporations sank a key funding component for a multitrillion-dollar social-spending package. Senate Finance Committee Chair. Ron Wyden. , an...
CONGRESS & COURTS・1 DAY AGO
Los Angeles Times

Vice President Kamala Harris, at an event for the anniversary of Martin Luther King's monument in Washington, vows to keep fighting for voting access.
LOS ANGELES, CA・2 DAYS AGO