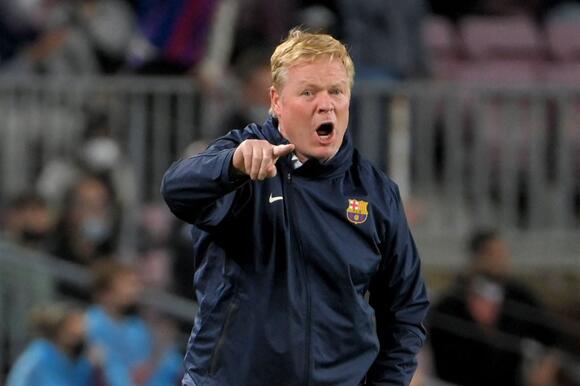 Barcelona lost further early ground in the long race to challenge for the title in LaLiga, with a 1-1 draw against Granada seeing the Camp Nou side play a far more direct style of play to usual - but head coach Ronald Koeman says it was a necessity.

While famed for a possession-based approach with creative, fast-playing individuals in the final third, the reality for Barcelona appears somewhat different in 2021/22 after the sale of Lionel Messi and absences to those who remain.

Ousmane Dembele, Ansu Fati, Martin Braithwaite and Sergio Aguero are all sidelined in attack, the latter still being yet to play since signing from Manchester City this summer. La Masia graduate Alex Collado was also omitted from the registered squad by Koeman, leaving him few options in the final third.

As a result, Barcelona resorted to constant crosses and set-plays as they sought to come from behind against Granada, who scored just two minutes in on Monday night.

Centre-back Ronald Araujo eventually forced a last-minute equaliser to keep Barcelona unbeaten in the league, but they sit seventh in the early table. Koeman ended up throwing two defenders - Gerard Pique the other, off the bench for forward Yusuf Demir - into attack as well as the aerially proficient Luuk de Jong, launching crosses into the Granada box.

“We changed our style a little bit,” Koeman said after the match.

“If you see the list of players, what do you do? Play tiki-taka? Tiki-taka when there are no spaces?

“We did what we had to do. We tried to win another way. We don’t have players one-on-one or with speed. We’re talking... I’m not going to say more because it seems I have to argue about everything.

“It depends on what we have available,” Koeman added. “How are we going to play tiki taki [sic] if there is no space? Look at the squad. We did what we have to do. With a bit more time, we would have won.

“Today’s Barcelona is not the Barca of eight years ago. We play the Barca way, but we don’t have players to play one-on-one or with pace. You can’t be unhappy with the team’s attitude.

“We played 4-3-3, but we didn’t have pace out wide. Neither [Philippe] Coutinho nor Demir are that player. They’re not Ansu or Dembele, so we have to look for another way.”

The draw comes after the humbling by Bayern Munich in the Champions League last week , meaning just one win in four across all competitions of late. Barcelona face Cadiz and Levante this week, before heading to Benfica in their second group stage match in Europe - and then a trip to reigning champions Atletico Madrid before the international break.

Everton forward Anthony Gordon is “ready for the challenge” of gatecrashing the England squad for the World Cup in Qatar.The 21-year-old, who is yet to feature in Gareth Southgate’s senior set-up, helped England Under-21s to a 3-1 friendly win over Germany at Bramall Lane on Tuesday.The showpiece in Qatar gets under way in November, and Gordon said: “If I didn’t have the ambition to play for England in the World Cup then I would be a bit stupid.“But I understand the squad is so good at the minute that it’s going to be really tough to get in.“I’m 100 per...
SOCCER・1 HOUR AGO
The Independent

Stephen Kenny will not abandon his attacking philosophy as he attempts to guide the Republic of Ireland to the Euro 2024 finals.Kenny signalled his intention to play a more enterprising brand of football when he replaced Mick McCarthy as Ireland manager in April 2020 and, for better or for worse, has stuck to his guns ever since.On Tuesday evening, he saw his side squander a 2-0 Nations League lead over Armenia inside two second-half minutes before Robbie Brady rescued victory with a late penalty, but he was unapologetic when asked about his approach.Kenny said: “We were just a bit too...
SPORTS・2 HOURS AGO