By Via AP news wire
The Independent
28 days ago 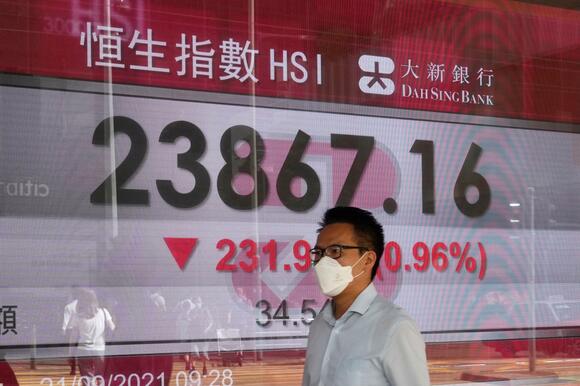 On Monday, U.S. stocks logged their biggest drop since May, with the tech-heavy Nasdaq composite sinking 2.2%.

Markets were closed Tuesday in Taiwan Shanghai and South Korea

Analysts said fears the damage from a property bust in China could ripple worldwide were drawing on memories of past financial crises such as the bursting of the Japanese “bubble” economy or the 2008 sub-prime mortgage crisis.

In Japan, that catastrophe is called the Lehman crisis for the 2008 collapse of the Lehman Brothers which aggravated the situation.

“The whisper is that this could be China’s ‘Lehman moment.’ Even with Chinese markets closed until Wednesday, we are seeing knock-on sell-offs around the world,” said RaboResearch.

Airlines were among the few bright spots. American Airlines rose 3% to lead all the gainers in the S&P 500. Delta Air Lines rose 1.7% and United Airlines added 1.6%.

The worries over Chinese property developers and debt have recently centered on Evergrande, one of China’s biggest real estate developers, which looks like it may be unable to repay its debts.

Those property companies have been big drivers of the Chinese economy, which is the world’s second-largest.

If they fail to make good on their debts, the heavy losses taken by investors who hold their bonds would raise worries about their financial strength. Those bondholders could also be forced to sell other, unrelated investments to raise cash, which could hurt prices in seemingly unrelated markets.

It’s a product of how tightly connected global markets have become, and it’s a concept the financial world calls “contagion.”

Many analysts say they expect China’s government to prevent such a scenario, and that this does not look like a Lehman-type moment. Nevertheless, any hint of uncertainty may be enough to upset Wall Street after the S&P 500 has glided higher in almost uninterrupted fashion since October, leaving stocks looking expensive and with less room for error.

On top of those worries, investors are watching to see if the Federal Reserve might ease off the accelerator on its support for the economy. And heavy government spending to counter the impact of the pandemic has raised the likelihood that Congress may opt for a destructive game of chicken before allowing the U.S. Treasury to borrow more money.

The Fed is due to deliver its latest economic and interest rate policy update on Wednesday.

Subscribe to Eastworld for insight on what’s dominating business in Asia, delivered free to your inbox. Since the Trump administration plunged the U.S. and China into a still-unresolved trade war in 2018, political pundits have argued that the two superpowers are entering a great “decoupling,” in which leading industries in each nation grow increasingly isolated from their counterparts in the other.
ECONOMY・14 HOURS AGO
investing.com

US tech rebound leads global stocks higher as earnings season about to heat up. Dollar plunges as mood improves and Fed seen falling behind in the tightening race. Riskier currencies power ahead as US yields fall back. Focus on earnings as jitters subside. Worries about soaring inflation, supply-chain chaos and...
STOCKS・11 HOURS AGO
theedgemarkets.com

HONG KONG (Oct 19): Asian shares advanced on Tuesday, supported by a tech-driven Wall Street rally, and a rebound in Chinese markets a day after weak data heightened investor concerns about the world's second-largest economy. The dollar was under pressure as weak U.S. factory data tempered expectations about any near-term...
STOCKS・18 HOURS AGO
IBTimes

Asian markets rose Tuesday, extending a Wall Street rally as optimism over corporate earnings provided some respite from long-running worries about inflation, central bank tightening and signs of a slowing economic recovery. A string of forecast-beating profit reports from businesses over the past week has provided a much-needed boost to...
NEW YORK CITY, NY・12 HOURS AGO

Can Wall Street Trust the People's Bank of China?

Scott Kennedy, trustee chair in Chinese business and economics at CSIS, said that trust hinges on the bank's intentions.
BUSINESS・21 HOURS AGO
investing.com

Investing.com – ADRs of Ericsson (NASDAQ:ERIC) traded 2.3% lower in Tuesday’s premarket as the telecom equipment maker’s market share in China eroded and sales fell. Some impact was seen from disturbances in the supply chain as well and Ericsson warned “such issues will continue to pose a risk.”. China is...
MARKETS・7 HOURS AGO
Markets Insider

Investors' allocations to US stocks eclipsed the level seen in the dot-com bubble and hit a record high of 52% in 2021, Goldman Sachs said.
STOCKS・1 DAY AGO
MarketWatch

What happens in China is unlikely to stay in China.
ECONOMY・1 DAY AGO

NEW YORK, Oct 18 (Reuters) - Oil prices pulled back after touching multi-year highs on Monday, trading mixed as U.S. industrial output for September fell, tempering early enthusiasm about demand. Production at U.S. factories fell by the most in seven months in September as an ongoing global shortage of semiconductors...
TRAFFIC・1 DAY AGO
MarketWatch

Gold futures settle with a loss on Monday for a second straight session, pressured by a rise in bitcoin and some strength in U.S. Treasury yields, but with a retreat in most global stock markets helping to limit losses for the precious metal.
MARKETS・1 DAY AGO
MarketWatch

Gold futures end higher on Tuesday, bucking headwinds from a rise in global stocks, as a weaker U.S. dollar helps prices for the precious metal score their first gain in three sessions.
BUSINESS・2 HOURS AGO
The Independent

It is difficult to believe that something as large and ostentatious as a hypersonic missile could be the subject of possible misidentification, but so it would seem. News reports based on numerous western intelligence services suggested China had indeed tested out such a weapon. capable of carrying a nuclear warhead, during the summer. Apparently it flew, faster than the speed of sound, through low-orbit before landing close to its target – broadly speaking a success, given the technological challenges involved.
POLITICS・1 DAY AGO
FOX40

BEIJING (AP) — China’s economic growth sank in the latest quarter as a construction slowdown and official curbs on energy use by factories weighed on the nation’s recovery from the coronavirus pandemic. The world’s second-largest economy grew 4.9% over a year ago in the three months ending in September, down from the previous quarter’s 7.9%, […]
ECONOMY・1 DAY AGO
Washington Post

It was the summer when the rains wouldn’t stop. The lights went out. And a housing boom came to a shuddering halt. China’s economy still grew 4.9 percent in the third quarter, matching its rate from a year earlier. But it lagged behind projections, reflecting that simply controlling the spread of the coronavirus isn’t enough to ensure smooth sailing.
ECONOMY・1 DAY AGO
MarketWatch

Our call of the day from Jim Bianco sees one big reason for bitcoin's recent climb, as investors wait for news of an ETF. And here's a bullish bitcoin chart.
MARKETS・1 DAY AGO
MarketWatch

Major U.S. stock indexes kicked off the week on a soft note Monday, under pressure after data showed slowing economic growth in China, and as investors awaited a heavy slate of corporate earnings. The Dow Jones Industrial Average fell 153 points, or 0.4%, to 35,143, while the S&P 500 was down 0.4% at 4,455 and the Nasdaq Composite gave up 0.3% to trade at 14,853. China reported 4.9% year-over-year growth in the third quarter, a big slowdown from the 7.9% recorded in the second quarter as construction output slowed.
STOCKS・1 DAY AGO
Markets Insider

US stocks turn mixed, closing near session highs, as the 10-year Treasury yield gave up most gains. Oil traded mixed, with Brent crude falling for the first time in three sessions, while gold dropped.
STOCKS・1 DAY AGO
Reuters

BEIJING, Oct 18 (Reuters) - China's economy hit its slowest pace of growth in a year in the third quarter, hurt by power shortages and wobbles in the property sector, highlighting the challenge facing policymakers as they seek to prop up a faltering recovery while reining in the real estate sector.
ECONOMY・1 DAY AGO
FOX 13 Memphis WHBQ

Asian shares were mostly lower on Monday after China reported its economy grew at a meager 4.9% annual pace in July-September. The Shanghai Composite index lost 0.4% to 3,559.96 while the Hang Seng in Hong Kong declined 0.4% to 25,246.38. Chinese growth is under pressure from government controls meant to...
RETAIL・1 DAY AGO