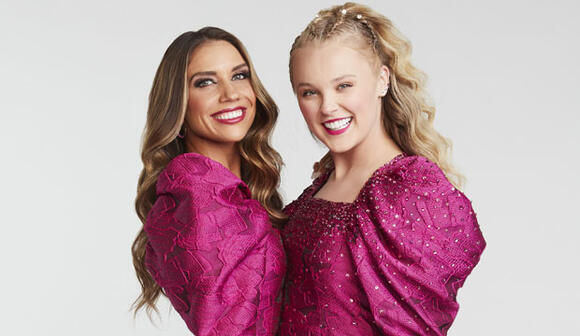 “ Dancing with the Stars ” saved the best for last during the season 30 premiere on Monday night, September 20. At least, the judges thought it was the best. JoJo Siwa topped the leaderboard on night one while making history in the process. Watch her quickstep above.

Siwa was one of the first two contestants announced for the season, and with that announcement came the news that she would be the first “DWTS” contestant ever to compete with a same-sex partner . It certainly took the show long enough to get there after same-sex performances had been featured on “So You Think You Can Dance” and “World of Dance” over the years. I mean, it took longer to get same-sex dancing on “DWTS” than it took to get same-sex marriage in America.

SEE ‘Dancing with the Stars’ season 30 premiere recap: Which celebrities stood out on first night of competition? [UPDATING LIVE BLOG]

But it’s still a big deal on this more conservative-leaning show, and it was surprisingly moving to watch Siwa and her pro partner Jenna Johnson perform at the end of the night. Siwa herself came out as queer in 2021 , which makes this even more meaningful since the 18-year-old YouTube star is bringing LGBTQIA+ representation to the dance floor as well. She and Johnson might have gotten a little too excited on the dance floor, however, as Johnson ended up losing her footing in the middle of their routine.

The judges still raved about their performance, though with Bruno Tonioli praising their “freedom of expression” and Derek Hough telling her, “You were born for ‘Dancing with the Stars.'” She received sevens from Tonioli, Hough, and Len Goodman , as well as an eight from Carrie Ann Inaba . That was the only eight given out in the season premiere, and if I’m being honest it’s a little sketchy to give the night’s highest score to the only routine with an actual fall, but I don’t think the overenthusiastic scoring should take away from what a gratifying performance it was otherwise. What did you think?

PREDICT ‘Dancing with the Stars’ now; change them until each Monday night’s show

Be sure to make your predictions so that the contestants can see how they’re faring in our racetrack odds. You can keep changing your predictions until just before the next episode airs every Monday on ABC. You’ll compete to win a spot on our leaderboard and eternal bragging rights. See our contest rules and sound off with other fans in our reality TV forum . Read more Gold Derby entertainment news .

This was not what Melanie C really, really wants. The Spice Girl and her partner Gleb Savchenko were voted off Monday’s “Dancing with the Stars” in another close vote and she is still processing it. “I’ve just been voted off.  You just never know what’s gonna happen. I just feel a little bit in shock really because you’ve always had to think about next week and picking yourself up and starting a new a dance,” Mel C said in an Instagram video posted shortly after the show. “My plan was to hopefully be here a little longer. It feels really, really...
THEATER & DANCE・4 DAYS AGO
GoldDerby

Yes, the ‘Dancing with the Stars’ cast was also confused about how the judges’ vote works

Don’t worry, you’re not the only one who’s been flummoxed by “Dancing with the Stars'” judges’ vote this season — the cast is too. As previously explained, because there are four judges this season, head judge Len Goodman‘s vote counts twice if Carrie Ann Inaba, Derek Hough and Bruno Tonioli are not in agreement on who to send home from the bottom two. However, the show has not done a great job explaining this to viewers — or apparently even to the cast — as many were left scratching their heads last week when Matt James and Lindsay Arnold, after leading...
TV & VIDEOS・3 DAYS AGO
GoldDerby

‘Dancing with the Stars’ performance: JoJo Siwa proved ‘girls can do anything guys can do’ as dashing Prince Charming [WATCH]

I’ll be honest, “Dancing with the Stars” took so long to introduce a same-sex couple that I was worried the producers would limit what they’d be able to express on the dance floor, but I’ve already been impressed with JoJo Siwa‘s journey on the show. We saw her and her pro partner Jenna Johnson in fast-paced dances, and then a mature Argentine tango, and on “Disney Heroes Night” she was dashing as “Cinderella’s” Prince Charming, shaking up the show’s usually rigid gender expression. Watch her Viennese waltz above and read what the judges had to say about it below. SEE‘Dancing with...
TV SHOWS・11 DAYS AGO
Hello Magazine

JoJo Siwa and her dance partner, Jenna Johnson, are making history as the first same-sex couple on the American version of DWTS, but how did they end up as a couple?. It's been quite the journey for the Nickelodeon star who only came out as gay earlier this year when she went public with her relationship with girlfriend, Kylie Prew.
THEATER & DANCE・10 DAYS AGO

Siwa and Johnson's routine got a score of 40 out of 40, with all four judges praising the pair for both their chemistry and technique.
TV SHOWS・4 DAYS AGO
Extra

JoJo Siwa and her “Dancing with the Stars” partner Jenna Johnson nabbed the first perfect score of the season on “Grease” night!. “Extra’s” Jenn Lahmers chatted with the team after the show as they celebrated the achievement, and JoJo also touched on something she’s going through privately right now.
TV SHOWS・3 DAYS AGO
Hello Magazine

JoJo Siwa and her professional DWTS partner are taking the dance show by storm and the 18-year-old contestant expressed her immense gratitude to Jenna Johnson with a heartfelt Instagram post. But JoJo's kind words also sparked a debate between her fans as they worried she's no longer with her off-screen...
THEATER & DANCE・11 DAYS AGO
Glamour

Dozens of publications, including this one, have reported it: JoJo Siwa is making history! The 18-year-old has paired with professional dancer Jenna Johnson to be first same-sex couple to compete on ABC's Dancing With the Stars. I was ready to let this piece of history go by with a feeble...
NEW YORK CITY, NY・7 DAYS AGO

JoJo Siwa discovered just how much ballroom dancing can hurt on Saturday when she updated fans with an injury which will make you wince. The 18-year-old DWTS contestant took to her Instagram Stories to display her legs - and the huge bruises all over them too. Speaking to the camera,...
CELEBRITIES・14 DAYS AGO
tvinsider.com

‘Dancing With the Stars’: A Tribute to ‘Grease’ Brings a Shocking Elimination (RECAP)

“Grease is The Word” on Episode 6 of Dancing With the Stars, as the show celebrated the halfway point of Season 30 with its first-ever Grease Night! The remaining 11 pairs threw on their leather jackets and poodle skirts for theatrical performances to the film’s iconic soundtrack. Olivia Newton-John and Didi Conn (aka Sandy and Frenchie) made special appearances to wish the competitors good luck, along with the Teen Angel himself, Frankie Avalon, dropping in to perform “Beauty School Dropout” live in the ballroom!
THEATER & DANCE・5 DAYS AGO
justjaredjr.com

JoJo Siwa snaps a cute photo with her two women at Disneyland!. The 18-year-old was joined by girlfriend Kylie Prew and her Dancing With The Stars dance partner Jenna Johnson for a segment ahead of this week’s episodes of the competition. This week, there are two full nights of Disney-themed...
TV & VIDEOS・11 DAYS AGO
Hello Magazine

JoJo Siwa is causing a stir on the dancefloor and off! The DWTS contestant sent her social media followers into a tailspin with several snapshots she shared alongside her dance partner Jenna Johnson on Friday. In the photos, JoJo, 18, had transformed herself into the pro-dancer, 27, complete with matching...
THEATER & DANCE・7 HOURS AGO

Going their separate ways. After less than one year of dating, JoJo Siwa and Kylie Prew have split, Us Weekly confirms. “JoJo and Kylie did break up,” a source exclusively tells Us. “Some [Dancing With the Stars] cast are aware about the breakup.”. The insider reveals that the teenagers’ split...
THEATER & DANCE・2 DAYS AGO
Insider

"You just showed the whole world that girls can do anything guys can do, and sometimes maybe even better," judge Carrie Ann Inaba said.
THEATER & DANCE・11 DAYS AGO
Hello Magazine

JoJo Siwa's best friend and girlfriend, Kylie Prew, has been her biggest cheerleader since she joined season 30 of Dancing with the Stars, but we are now just a few weeks into the competition and fans are wondering where she is. The 18-year-old has been open about how incredible she...
CELEBRITIES・9 DAYS AGO
ABC7

A shocker in the ballroom with the latest elimination on Dancing with the Stars: Former Spice Girl Melanie C and her professional partner Gleb Savchenko were eliminated at the end of the show's tribute to the movie "Grease."
TV SHOWS・4 DAYS AGO
PopSugar

JoJo Siwa continues to make history on Dancing With the Stars. Dressed as Prince Charming alongside partner Jenna Johnson's Cinderella, the former Dance Moms star danced a magical Viennese waltz to "A Dream Is a Wish Your Heart Makes" from the iconic movie for Disney Heroes night on Monday. The duo, who became the first same-sex dancing pair in the show's history this season, continues to impress judges and fans with their stunning moves and sparkling chemistry.
TV SHOWS・11 DAYS AGO
International Business Times

JoJo Siwa is single as she and her girlfriend Kylie Prew have reportedly called it quits. Siwa, 18, and Prew, 18, split after less than a year of dating, an unnamed source confirmed to Us Weekly. "JoJo and Kylie did break up," the insider said. "Some ['Dancing With the Stars']...
THEATER & DANCE・2 DAYS AGO
GoldDerby

You’re the ‘DWTS’ lineup that I want: See who’s performing what on ‘Grease’ Night

It’s no longer “Summer Nights,” but that’s not going to stop “Dancing with the Stars” from doing a “Grease” Night. The remaining 11 couples will perform to tunes from the iconic musical on Monday because the show is hopelessly devoted to theme nights. You’ve got all the usual suspects from “Grease” and will be treated to a double dose of one song: Melora Hardin and Artem Chigvintsev will perform their Viennese waltz to “Look at Me, I’m Sandra Dee” while JoJo Siwa and Jenna Johnson will foxtrot to the reprise. For the first time this season, the Charleston will be performed...
MUSIC・6 DAYS AGO
Us Weekly

Lose yourself to dance. JoJo Siwa called Dancing With the Stars an “escape” as she deal with an “extreme” experience in her personal life amid her Disney Week performances. “Everyone always says dance is an escape,” the 18-year-old YouTube star told Us Weekly and other reporters on Tuesday, October 12,...
TV SHOWS・10 DAYS AGO