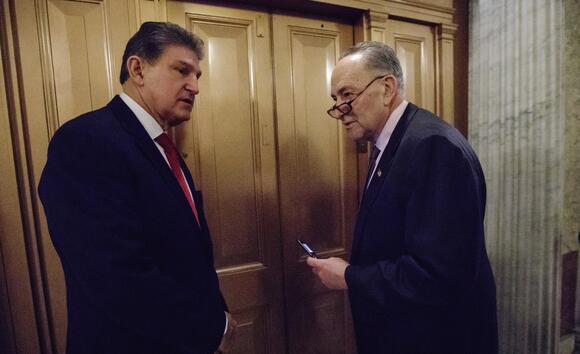 D emocrats planned to pass a massive social spending bill along with a major infrastructure package, government funding, and a debt ceiling increase — all by the end of September.

But the plan is crumbling due to internal differences over spending, taxes, and big policy changes lawmakers hoped to include in the legislation.

“Democrats continue to make good progress towards sending our Build Back Better agenda into law,” the New York Democrat said on the Senate floor.

But in reality, Democrats have no apparent path to pass both a $3.5 trillion social welfare spending bill and a $1.2 trillion hard infrastructure measure, despite a self-imposed Sept. 27 deadline.

In addition, the party triggered a fiscal standoff with Republicans on Monday by announcing a must-pass government spending bill will be linked to a debt ceiling increase despite a warning from the GOP they’ll block legislation that pairs the two measures.

Most of the Democratic Party’s problems stem from differences among party lawmakers regarding spending and taxes.

Manchin has repeatedly called for slowing down consideration of the $3.5 trillion package, which other party lawmakers fear will hurt the chances of ever passing it.

Manchin is also opposed to raising corporate tax rates above 25%, which is below the 26.5% rate his party proposed to offset the cost of the social welfare bill.

Sinema and several House centrist Democrats say they opposed a House provision in the $3.5 trillion package that would provide roughly $700 billion by allowing the government to negotiate prescription drug prices, which opponents say would hurt drug innovation. Sen. Jon Tester, a Montana Democrat, opposes a plan to increase capital gains taxes because he believes it would hurt family farmers. Meanwhile, Manchin disapproves of green energy initiatives aimed at ending the use of fossil fuels.

The opposition leaves Democrats with a difficult, if not impossible, path to passing the two bills.

House Democrats control the majority with just three seats, while the Senate is evenly split, meaning Democrats cannot lose a single party vote if they hope to pass the big spending bill.

Schumer was nonetheless upbeat on Monday.

“No one expected it would be easy to pass legislation to transform the American economy and pass the biggest tax cut for the middle class in a generation,” Schumer said. “But no one in this body was elected to do only the easy stuff. We have a lot of hard work to do. And we're going to keep adding until we get the job done.”

However, House Democrats face immediate opposition to their plan to pass the two-part package.

The head of the House liberal faction announced Democrats oppose a leadership plan to take up the $1.2 trillion infrastructure package on Sept. 27.

House Progressive Caucus Chairwoman Pramila Jayapal, a Washington Democrat, is among many Democrats who say they won’t vote for the infrastructure bill unless the House and Senate first pass the $3.5 trillion spending package.

The infrastructure package provides funding for roads, bridges, water projects, and expanded broadband and was negotiated between Senate lawmakers and Biden, who is eager to sign it into law.

Speaker Nancy Pelosi, a California Democrat, could bring up the infrastructure bill and attempt to pass it over the objections of many Democrats but with the help of dozens of Republicans who are poised to support it.

It would be considered a major betrayal to the Democratic Party base, but a top party lawmaker hinted it's a possible strategy.

On Sunday, House Budget Committee Chairman John Yarmuth told Fox News Sunday the House could pass the infrastructure bill next week. Still, Pelosi could delay sending it to the president to provide time for passing the social welfare spending package.

“She can hold on to that bill for a while,” Yarmuth said. “So, there's some flexibility in terms of how we mesh the two mandates.”

The internal strife slowing the Biden spending agenda will soon clash with the House and Senate’s primary responsibility to pass annual government funding.

The fiscal year ends on Sept. 30, and Congress must pass a temporary measure to provide the funding needed to keep the government fully operating.

Democrats Monday announced they plan to pair the government funding bill with a provision to suspend the debt ceiling until December 2022.

Democrats decided to link the two measures despite a warning from Senate Republicans that they would not provide the 10 GOP votes needed to pass the bill in the Senate.

Republican opposition means Democrats will likely have to come up with another way to pass the temporary government funding and the debt limit, likely by de-linking the two measures.

“Democrats decided to govern alone,” said Minority Leader Mitch McConnell, a Kentucky Republican, on Monday. “Their unified Democratic government must put basic governing duties ahead of partisan wish lists. If they don’t, the consequences for our country would be catastrophic.”

Although Joe Manchin has been holding up Joe Biden’s infrastructure plans for a while now over the price tag, the West Virginia senator has been somewhat cagey about his actual demands. Not as guarded, perhaps, as Kyrsten Sinema, his fellow Democratic holdout; where she has refused to state her terms to anyone outside the White House, Manchin at least engages with his colleagues and speaks publicly about his objections to the reconciliation bill. But he’s been difficult to pin down nonetheless, adding to the frustrations of Democrats as they seek to deliver on the centerpiece of Biden’s domestic agenda.
CONGRESS & COURTS・1 DAY AGO

Did Biden Exempt Congress From the COVID-19 Vaccine Mandate?

The COVID-19 virus is to blame for the deaths of 4,887,600 across the globe as of Oct. 18, 2021, reports the World Health Organization (WHO). With the global crisis far from over, the Biden administration has taken measures to curb the spread of the virus by issuing an executive order that calls for a COVID-19 vaccine mandate. Is Congress exempt from this vaccine mandate?
CONGRESS & COURTS・1 DAY AGO
POLITICO

Democrats had hoped it could be an alternative way of curbing emissions in their reconciliation bill. What they're saying: Key moderate senators are resisting efforts to impose a carbon tax as part of their climate action plan, sending progressives back to the drawing board. Sen. Joe Manchin plainly told reporters...
CONGRESS & COURTS・16 HOURS AGO
Business Insider

Manchin's $60,000 income threshold for Biden's expanded child tax credit could cause 37.4 million kids to lose out on federal aid

It amounts to 60% of eligible kids across the US facing sharp cuts, including many in West Virginia, according to a Niskanen Center analysis.
CONGRESS & COURTS・18 HOURS AGO
Washington Post

As Sen. Joe Manchin III seeks to shrink one of our most promising anti-poverty policies — the expanded child tax credit — it’s widely accepted that he just has to do these things to ensure his political survival. After all, in his deep red state of West Virginia, Democrats like him must achieve distance from Washington liberals in any way possible, right?
CONGRESS & COURTS・10 HOURS AGO

New York Times editorial board member Michelle Cottle last week called for Sen. Kyrsten Sinema, D-Ariz., to leave the Democratic Party and become an independent. In a Friday op-ed, Cottle cited the moderate Democrat's split with others in her party on major issues related to President Biden's Build Back Better agenda as a reason she should consider leaving and suggested her departure could wind up "being positive for all involved."
CONGRESS & COURTS・1 DAY AGO
Vox

Democrats are terrified of what the future holds for them in the United States Senate. The party currently controls half the seats in the chamber, giving them, with Vice President Harris’s tie-breaking vote, the narrowest possible majority. But some in the party — like pollster David Shor, recently profiled by Ezra Klein in the New York Times — believe demographic trends put Democrats at grave risk of falling into a deep hole over the next two election cycles.
CONGRESS & COURTS・1 DAY AGO
WashingtonExaminer

As the party tries to reach agreement, here are key proposed categories for the spending.
WASHINGTON, DC・18 HOURS AGO
The Independent

As the US Capitol was under siege on 6 January, about a dozen Republican senators hid in a storage closet – not from the intruders, a new report says, but from their Democratic colleagues.According to a Washington Post interview with Senator Tommy Tuberville, the GOP lawmakers were already in a secure room when they decided to huddle in the closet. What they were seeking was not safety, but privacy, so they could plot their next move in light of the insurrection.“You’ve got 25 seconds to call a play,” Mr Tuberville, a former football coach, recalled to the Post. “You...
CONGRESS & COURTS・10 HOURS AGO
Fox News

The Washington Post editorial board is lashing out at progressive lawmakers amid the Democratic infighting regarding the spending spree bills being stalled on Capitol Hill in a piece titled "Biden did not run to stage a revolution. Progressives should stop demanding one." "For a moment, progressives seemed to have a...
PRESIDENTIAL ELECTION・10 HOURS AGO
The Guardian

Joe Manchin is worried that American families will get spoiled if their government looks out for them too much. In negotiations over the Build Back Better Act (BBBA), the Biden administration’s sweeping social spending bill that is poised to be passed through budget reconciliation, the West Virginia senator has reportedly admonished the Biden administration and progressive Democrats that the bill is too big. The Build Back Better Act has already shrunk: the Biden administration initially proposed $3.5tn in social spending, which in negotiation has dwindled dramatically to $2.2tn. The cuts already mean that Biden will likely fail to meet some of his campaign promises, a prospect that spells bad news for the Democrats in next year’s midterm elections.
ELECTIONS・1 DAY AGO

Democratic infighting and gridlock in Congress over infrastructure and sweeping social programs could be partly to blame for the current state of Virginia's gubernatorial race, which is a toss-up despite President Joe Biden winning the state by 10 points in 2020.
VIRGINIA STATE・21 HOURS AGO
POLITICO

Saule Omarova's nomination has been the target of attacks over her views that the government should play a greater role in the financial system.
CONGRESS & COURTS・14 HOURS AGO
WashingtonExaminer

Biden easily outpaced by Obama and Trump in presidential interviews

President Joe Biden is outpaced by his two most recent predecessors in the White House when it comes to interviews with reporters.
PRESIDENTIAL ELECTION・6 HOURS AGO
Washington Examiner

Democrats have found their “anti-Rubio warrior” in Florida’s Senate race, according to Politico. But in Rep. Val Demings, what they have actually found is yet another money furnace that will deliver a disappointing loss when the votes are counted. Politico’s piece details that Demings, the Democratic challenger to Sen. Marco...
FLORIDA STATE・1 DAY AGO