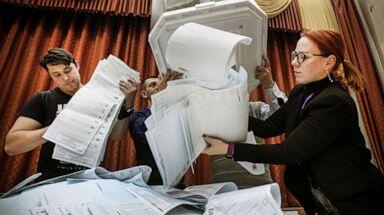 MOSCOW -- Russia’s ruling party, United Russia, which backs President Vladimir Putin, has kept its supermajority in the country’s parliament, sweeping elections that were marred with allegations of widespread ballot rigging and saw many of the Kremlin’s top opponents barred from running.

With virtually all ballots counted, Russia’s election’s commission said United Russia had taken nearly 50% of the vote and won nearly 90% of first-past-the-post districts, meaning the party will retain its two-thirds majority in the lower house of parliament, which allows it to change Russia’s constitution.

Russia’s elections are closely managed, and the pro-Kremlin party’s victory was seen as a foregone conclusion, but on Monday, opposition parties accused the Kremlin of using blatant fabrication to inflate the result and produce an overwhelming win even in Moscow, usually a center of dissent.

After polls closed Sunday night after three days of voting, early partial results showed several opposition parties and politicians making strong showings in the capital, with some seemingly in reach of victory with most votes counted.

But those results were all wiped out when, after many hours, authorities published results from online voting, which handed victories to pro-Kremlin candidates. Opposition parties, even those from the so-called "loyal opposition," cried foul, accusing the Kremlin of using the online votes to conceal vote manipulation and steal victory for its candidates.

The Communist Party, which largely acts as a tame opposition in the parliament, said it would not recognize the results in Moscow, where six of its candidates lost out once the online votes were added.

Critics started raising suspicions about Moscow’s online count after it took far longer for it to be completed than the paper ballot count for most of the rest of the country -- a sign, critics said, that officials were waiting to see how much they needed to alter the vote. The online voting was in effect a black box, with independent monitors unable to observe it or properly check how the results were signed off on by officials, independent monitors said. Workers at state companies and organizations have also reported being pressed by their managers to vote online en masse.

Several candidates called a protest at Moscow’s Pushkin Square on Monday. A few hundred people gathered under heavy rain to demonstrate, watched by a cordon of riot police.

"Such a giant difference between the results at the 'live' polling stations and the online vote can’t be true," Mikhail Lobanov, a Communist candidate with wide support among liberal voters, told the crowd, according to Radio Free Europe/Radio Liberty.

Lobanov said he had been on track to beat Yevgeny Popov, a pro-Kremlin TV personality, by a margin of 10,500 votes before the online votes suddenly gave Popov a lead of 20,000 votes at the last moment.

There were also allegations of widespread analogue ballot rigging around Russia. Throughout the weekend, there was a stream of videos seeming to show elections officials stuffing wads of ballots into voting urns or trying to block monitoring cameras while others did so.

Independent researchers also spotted that Russia's central elections committee now encrypts the results data published on its website, a step reportedly intended to prevent researchers from crunching the data themselves, which in the past has allowed them to identify signs of rigging.

"Online voting represents right now represents an absolute evil -- a black box that no one checks," Sergey Shpilkin, a data scientist who in the past has used statistical analysis to demonstrate likely falsification in Russian elections, told Russian news website Meduza.

The head of Russia’s elections commission Ella Pamfilova in a video meeting with Putin said the elections had seen far fewer violations than usual and claimed Russia’s system was "one of the most transparent" in the world.

The United States and some European countries criticized the elections as unfair amid the Kremlin's use of repressive laws to prevent opponents from participating. Ned Price, the U.S. State Department's spokesperson, in a statement said the Russian government had conducted "widespread efforts to marginalize independent political figures" and had "severely restricted political pluralism and prevented the Russian people from exercising their civil and political rights."

United Russia took nearly 50% of the vote despite polls suggesting its support was around 30%, as high food prices and unpopular pension reforms have eaten into its popularity. Ahead of the elections, the Kremlin launched a campaign of repression on a scale unprecedented under Putin’s 20 year-rule, barring dozens of opposition candidates from running, with many arrested and some forced abroad.

It dismantled the movement of its fiercest critic Alexey Navalny, who was jailed in January after surviving a nerve agent poisoning last year.

Navalny, from jail, had sought to exploit the Kremlin party’s unpopularity at the elections with a tactical voting campaign called "Smart Voting," advising people to vote for any candidate with the best chance of beating United Russia.

On Monday, he claimed the campaign had worked, arguing the campaign’s recommended candidates had won 12 out of Moscow’s 15 districts before the online votes were added.

The Communist Party notably improved their share of the vote across Russia, taking around 19%, up from 13% five years ago, in a sign of a growing protest vote among Russians weary with Putin’s two-decade rule, experts said.

Several opposition figures and election monitors alleged the fraud in these elections was worse than in 2012, when a rigged parliamentary election prompted mass street protests, the largest ever under Putin.

This year, there appeared no sign those protests would be repeated amid a far more repressive environment in Russia. And though Navalny's team said they would support any peaceful demonstrations called to protest the falsification, they did not call for any themselves.

Vladimir Putin has ordered all Russian workers to stay home for a week as he slammed the public - including his own relatives - for its vaccine hesitancy. The Kremlin reported a consecutive record daily Covid toll with 1,028 deaths on Wednesday, bringing its total fatalities to 226,353 - by far the highest in Europe.
PUBLIC HEALTH・2 HOURS AGO
Business Insider

Putin suggested that American Hadley Gamble was too "beautiful" to understand his explanation of Russia's standoff with Europe over gas supplies.
POLITICS・1 DAY AGO
KREX

Russia hosts Taliban for talks after warning against IS threat

Russia hosts the Taliban for talks in Moscow on Wednesday, seeking to assert its influence on Central Asia and push for action against Islamic State fighters which it says have massed in perennially volatile Afghanistan. The talks, which draw officials from 10 countries including China and Pakistan, are one of the Taliban's most significant international meetings since seizing power in mid-August. They come after Russian President Vladimir Putin warned last week that IS fighters were gathering in Afghanistan to spread discord in former Soviet republics flanking Russia. Russia's veteran foreign minister, Sergei Lavrov, is set to address the gathering.
POLITICS・11 HOURS AGO

Awarding Alexei Navalny the prestigious human rights prize marks a symbolic rebuke of Vladimir Putin, who has been at odds with the EU for years.
ADVOCACY・3 HOURS AGO
WashingtonExaminer

"Our main task now is to protect the lives of citizens and, as far as possible, minimize the spread of Covid-19 infections," Putin said.
PUBLIC HEALTH・28 MINUTES AGO
The Independent

Russia hosted talks on Afghanistan on Wednesday involving senior representatives of the Taliban and other factions, a round of diplomacy that underlines Moscow s clout.Opening the talks, Russian Foreign Minister Sergey Lavrov emphasized that “forming a really inclusive government fully reflecting the interests of not only all ethnic groups but all political forces of the country” is necessary to achieve a stable peace in Afghanistan.Russia had worked for years to establish contacts with the Taliban, even though it has designated the group a terrorist organization in 2003 and never took it of the list. Any contact with such groups...
POLITICS・7 HOURS AGO

Sweden s foreign minister visited Israel on Monday in an effort to mend ties after years in which the two countries have been at odds over the conflict with the Palestinians Sweden's Social Democratic-led government recognized Palestinian statehood in 2014, making it the first large European country to do so since the end of the Cold War. Its former foreign minister’s comments in support of the Palestinians drew angry responses from Israeli officials.Ann Linde tweeted that her visit — the first by a Swedish foreign minister in a decade — marks a “new beginning.”Linde began her trip with a...
POLITICS・2 DAYS AGO
Business Insider

Tensions between Russia and NATO have been escalating for years, particularly since Putin's unilateral annexation of Crimea.
MILITARY・2 DAYS AGO
kfgo.com

TOKYO (Reuters) – The heads of Japan’s major parties will hold a public debate on Monday likely to focus on who can best respond to an expected next wave of COVID-19 infections and fix the pandemic-hit economy, two weeks ahead of the national election. Prime Minister Fumio Kishida, who as...
ELECTIONS・2 DAYS AGO
Business Insider

Putin told the CNBC reporter Hadley Gamble that she didn't seem to understand him when she asked him about a Russia-Europe standoff over gas supply.
GAS PRICE・5 DAYS AGO

World economy depends on US; Russia interested in absence of leaps: Putin

Vladimir Putin is not against cryptocurrencies, but does add that they can't be used in oil trading just yet
MARKETS・6 DAYS AGO
Reuters

BERLIN, Oct 11 (Reuters) - German Chancellor Angela Merkel and French President Emmanuel Macron had phone calls on Monday with the presidents of Ukraine and Russia to discuss the conflict in Ukraine, and agreed their foreign ministers should meet, the German government said. The two West European leaders spoke first...
POLITICS・8 DAYS AGO
northwestgeorgianews.com

BAGHDAD — Polls closed on Sunday in Iraq after voting in a parliamentary election brought forward in response to monthslong street protests in favor of reform. The elections, held amid tight security, were the second since Iraq declared military victory over the Islamic State militant group almost four years ago.
ELECTIONS・9 DAYS AGO
BBC

Iraqis have voted in the first parliamentary election since mass protests over corruption, unemployment and poor services erupted in 2019. The poll had been due next year but was brought forward by six months in response to the unrest, during which hundreds of people were killed. The old electoral system...
PROTESTS・10 DAYS AGO
theedgemarkets.com

BAGHDAD (Oct 10): Iraqis were voting in small numbers on Sunday in a parliamentary election that many said they would boycott, having lost faith in the democratic system brought in by the US-led invasion of 2003. The established, Shi'ite Islamist-dominated ruling elite whose most powerful parties have armed wings is...
PRESIDENTIAL ELECTION・10 DAYS AGO
WTOP

Parliamentary election in the Czech Republic: Does Bobbis get the “cream of the cake”?

Two-day parliamentary elections have begun in the Czech Republic. Prime Minister Bobby’s ANO wants to continue to rule. But coalition partners can fail – and revelations about foreign deals give the opponent a tailspin. Peter Lange, ARD Studio Brock. Svetlana Widowska, moderator of the last debate on Czech television, seemed...
POLITICS・12 DAYS AGO