By Lesley Goldberg
The Hollywood Reporter
28 days ago 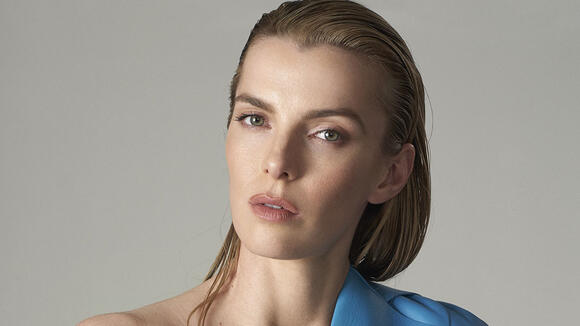 Showtime has found the second of its Three Women .

GLOW alum Betty Gilpin has boarded the straight-to-series drama based on Lisa Taddeo’s book of the same name, joining Shailene Woodley and Dewanda Wise in the cast.

Picked up straight to series in July after Showtime landed the rights to the novel in 2019 following a bidding war, Three Women explores American female desire and follows three women on a crash course to radically overturn their lives.

The drama revolves around three women: Lina (Gilpin), an Indiana woman in a passionless marriage who embarks on an all-consuming affair; Sloane (Wise), an entrepreneur from the Northeast who has a committed open marriage until two sexy strangers threaten her and her husband’s aspirational love story; and Maggie, a student in North Dakota who accuses her married English teacher of an inappropriate relationship.

Woodley will play Gia, a writer grieving the loss of her family who persuades each woman to tell her story, and whose relationships with the trio change her life. The role of Maggie is currently casting.

Author Taddeo exec produces the Showtime adaptation of Three Women alongside showrunner Laura Eason, Kathy Ciric and Shameless alum Emmy Rossum. Louise Friedberg will direct and exec produce the first two episodes. A premiere date has not yet been determined. Production begins in the fall.

It sounds like it's been a bumpy ride for this actor on a long-running Showtime series. In a new interview, Shameless star Emma Kenney talked about working with former co-star Emmy Rossum and their relationship, which was apparently full of highs and lows. Kenney and Rossum played sisters on the long-running series for eight years, until Rossum left the show in 2019 after the ninth season. The show then concluded earlier this year after its 11th season.
TV & VIDEOS・4 DAYS AGO
The Hollywood Reporter

I don’t remember George Franklin’s 1990 murder trial, one of the nation’s first to hinge almost exclusively on the phenomenon of repressed memory, but I absolutely remember when suddenly every broadcast procedural started having regular plotlines built around repressed memory. Or maybe I don’t? Maybe I watched a repeat of L.A. Law — probably “I’m Ready for My Closeup, Mr. Markowitz,” from 1992 — and conflated that into recollections of countless similar episodes? Maybe I only read an episode description from that L.A. Law and was able to imagine the rest of the episode? Memory is a tricky thing, much more so...
TV & VIDEOS・9 DAYS AGO
Insider

12 shows you should watch if you love Netflix's 'You'

From "Dexter" to "Breaking Bad," here are similar series that fans of the thriller hit starring Penn Badgley and where to stream them.
TV SERIES・1 DAY AGO

One fan favorite character from the hit Showtime series Billions has said goodbye to the show. Damian Lewis, who played multibillion dollar hedge fund CEO Bobby Axelrod, is leaving after five seaons of the cable drama. Executive Producer Brian Koppelman tweeted out following the show's season finale, "What an incredible joy to spend five years working so closely with the great @lewis_damian ! @DavidLevien and I are beyond grateful to you, Damian, for the work, of course, and the fellowship, and for all you sacrificed to come do this with us."
TV SERIES・14 DAYS AGO
Empire

Another day, another Stephen King film adaptation cranking into life. At this rate, there will be no more of his books left to turn into movies and producers will simply wait until he writes a letter to someone. Still, we do at least have short story Mr. Harrigan's Phone, which on the screen will star Donald Sutherland and It's Jaeden Martell.
MOVIES・14 DAYS AGO
tvseriesfinale.com

Billions ended its fifth season on Sunday night, and viewers won’t have long to wait for the return of the Showtime drama. Season six will arrive in January and a major change is ahead — Damien Lewis has departed the series after five seasons. He spoke about his exit on...
TV SERIES・13 DAYS AGO
ComicBook

It's looking likely Jake Gyllenhaal will be John Prophet. ComicBook.com can confirm the Spider-Man: Far From Home star is in final talks to star in the live-action adaptation of Rob Liefeld's classic Prophet independent comic. Furthermore, we can reveal Extraction helmer Sam Hargrave is also near finalizing a deal to board the project as director.
MOVIES・11 DAYS AGO

Amanda Salas caught up with two of the stars on Showtime's series "American Rust." Alex Neustaedter and Julia Mayorga share their process and reaction to being cast on the show, their favorite activities to do in Los Angeles, and Julia shares her heritage with us for Hispanic Heritage Month. The drama airs on Sundays and is based on the book of the same name. The series also stars Jeff Daniels, Maura Tierney, Mark Pellegrino, and David Alvarez.
LOS ANGELES, CA・10 DAYS AGO
Power 102.9 NoCo

There's a new series on Showtime with Jeff Daniels and Maura Tierney, 'American Rust.' The show recently had a wedding scene that used a Loveland woman's work. How neat to find out that someone I went to high school with had one of her pieces featured on TV. This is a good show, too; not some reality show about weddings, trust me.
LOVELAND, CO・10 DAYS AGO
GeekTyrant

Poldark star Aidan Turner has signed on to star in the drama series The Suspect for ITV. The adaptation is based on Michael Robotham’s novel of the same name. The series is being adapted by Gangs of London writer Peter Berry. The five-part series will also star Shaun Parkes (Small...
TV SERIES・12 DAYS AGO
The Hollywood Reporter

[This story contains a spoiler for The Many Saints of Newark.] Corey Stoll knows that fans of The Sopranos can be hardcore, so he was somewhat expecting those displeased over the twist in The Many Saints of Newark to approach him on the street with a bone to pick. But, so far, so good. The Hollywood Reporter recently caught up with the TV and film actor to discuss a variety of topics, including the reaction to the David Chase prequel film, in which he played Corrado “Junior” Soprano, what it is like to be on a Netflix show that’s all the rage...
MOVIES・2 DAYS AGO

Rachel Weisz To Star in Legendary’s Adaptation of ‘Seance on a Wet Afternoon’, Tomas Alfredson To Direct

EXCLUSIVE: Rachel Weisz is set star in and produce Legendary’s adaptation of acclaimed suspense novel Seance on a Wet Afternoon with Tinker, Tailor, Soldier, Spy helmer Tomas Alfredson to direct. Alfredson comes aboard the project replacing Harry Bradbeer, who will remain on as an executive producer as he recently returned to direct Legendary’s Enola Holmes sequel after the success of the first film. BAFTA and Tony-winner Jack Thorne wrote the draft, from a story by himself and Bradbeer. Based on Mark McShane’s acclaimed 1961 suspense novel of the same name, the story follows a self-proclaimed psychic medium who convinces her husband to kidnap a child...
MOVIES・4 DAYS AGO
The Hollywood Reporter

‘Y: The Last Man’ Canceled at FX on Hulu

Y: The Last Man‘s long path to the screen wound up being longer than its life on-screen. Showrunner Eliza Clark and star Amber Tamblyn took to Twitter on Sunday to announce that the adaptation of Brian K. Vaughan’s beloved comics will not return for a second season on FX on Hulu. The news, which FX has yet to confirm but sources told THR happened Friday, comes after a more than decade-long development process that saw the IP bounce around between studios and filmmakers before landing at FX for development back in 2015. Clark, who took over as showrunner from Michael Green and...
TV SERIES・1 DAY AGO
mediapost.com

If I take issue with anything concerning the new Showtime series "Wakefield," then it is the manner in which the show is positioned in Showtime’s publicity material. It is described there as a drama but with "comedic" elements. If the latter is true, then the funny parts eluded me when I watched the first episode of this show on Friday.
TV SERIES・8 HOURS AGO

Netflix selectively reveals viewing information when the results are good. More and more stars are pressing the issue, like Kevin Hart did on Fatherhood and Ryan Murphy on Ratched. Such is the case this morning with Jake Gyllenhaal, divulging the stats on The Guilty, the movie he made in lockdown with his Southpaw director Antoine Fuqua. According to Gyllenhaal, the film — shot over 11 days, with Fuqua working from a trailer after someone in his circle tested positive for Covid — will be seen in 69 million households in its first four weeks, and has been the streamer’s top movie in 91 countries. Gyllenhaal plays a 911 dispatcher with a sketchy past who tries to help a woman kidnapped by her husband, leaving her children in danger. Pic opened limited in theaters September 24, and on Netflix beginning October 1. It’s a Nic Pizzolato-scripted remake of the Danish film Den Skyldige. View this post on Instagram A post shared by Jake Gyllenhaal (@jakegyllenhaal)
MOVIES・6 HOURS AGO
Variety

Showtime announced that Blair Underwood and Lola Kirk have been cast in the upcoming drama series “Three Women” based on Lisa Taddeo’s book of the same name. As a series regular, Underwood will play Richard, a popular chef who is blindsided when his wife Sloane (DeWanda Wise) enters a sexual relationship with another man. Lola Kirke plays the recurring guest role of Jenny, a free spirit who may be the only woman Sloane has ever been close to. Along with Wise, previously announced stars include Shailene Woodley, Betty Gilpin and Ravi Patel. The series is a story of female desire, charting the...
TV SERIES・40 MINUTES AGO
Variety

Mel Gibson will star in the “John Wick” prequel series “The Continental” at Starz, Variety has confirmed. “The Continental” was originally ordered at Starz in 2018 and focuses on the inner workings of the titular hotel from the film franchise, which is a refuge for assassins. “The Continental” will explore the origin behind the hotel-for-assassins through the eyes and actions of a young Winston Scott, who is dragged into the Hell-scape of a 1975 New York City to face a past he thought he’d left behind. Winston charts a deadly course through the New York’s mysterious underworld in a harrowing attempt to seize...
MOVIES・2 HOURS AGO