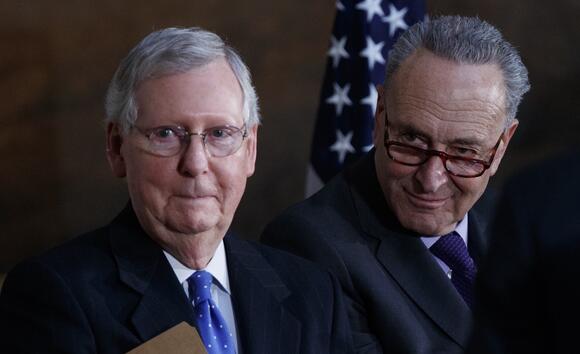 D emocratic leaders announced Monday that they will pair a critical government funding bill with a provision to raise the nation’s borrowing limit, triggering a fiscal showdown with Republicans.

“Addressing the debt limit is about meeting obligations the government has already made, like the bipartisan emergency COVID relief legislation from December, as well as vital payments to Social Security recipients and our veterans,” Pelosi and Schumer said in a joint statement.

Congress must pass a temporary government funding bill by Sept. 30, the end of the fiscal year.

Treasury Secretary Janet Yellen warned lawmakers separately that the debt limit must be increased by early October in order to ensure the government can continue to pay back money already spent.

Republicans are opposed to raising the borrowing limit because they believe Democrats are spending recklessly.

Democrats, who control the House and Senate, will attempt to pass a $3.5 trillion social welfare spending bill they want to pay for in part with major tax increases. Republicans unanimously oppose the big spending package.

Democrats hope they can lure in enough Republicans to pass the government funding and debt limit package or at least put political pressure on GOP lawmakers.

House Democrats can pass the measure with a simple majority, but the Senate needs 10 Republicans to advance the package.

To attract GOP votes, Democrats will add billions in funding for states hit hard by summer storms and wildfires, an effort likely to win over at least a few GOP senators.

The Biden administration has requested $24 billion in emergency aid for those disasters, as well as an additional $6.4 billion to help Afghan refugees resettle in the United States.

In the joint statement Monday, Pelosi and Schumer said Republicans must vote for the bill because they helped pass the legislation that contributed to the debt, including COVID relief legislation in 2020.

“We believe a suspension of the debt limit through December 2022 would provide an amount of time commensurate with the debt incurred as a result of passing last winter’s bipartisan $908 billion emergency COVID relief legislation, which was authored by Republican Senators Cassidy, Romney, Portman, Collins, and others and ultimately voted for by more than 40 Republicans, including Senator McConnell, and signed into law by the previous president,” Pelosi and Schumer said in a statement.

Schumer later said in a Senate floor speech that "both parties will have to come together" to pass the debt limit increase.

Schumer warned that if the GOP blocks the bill, threatening government funding and the Treasury's ability to pay the bills, the nation could "slip back into recession and undo everything we've done to help struggling Americans pick themselves up," Schumer said.

McConnell said Monday the GOP will only support a bill that temporarily funds the government, paired with disaster relief and aid for Afghan refugees.

“We will not support legislation that raises the debt limit.”

McConnell said Democrats can pass the debt limit increase by including it in the social welfare spending package, which Democrats will pass with a simple majority and no Republican votes using a tactic called budget reconciliation.

House Republicans, who unanimously oppose a plan by Democrats to jam through a massive social welfare package, will launch their own campaign next week condemning the legislation as “welfare expansion.”
CONGRESS & COURTS・21 HOURS AGO
WashingtonExaminer

President Joe Biden, eager to revive stalled negotiations on his economic agenda, will meet with warring House Democrats this week in a bid to reach a deal.
WASHINGTON, DC・12 HOURS AGO
WashingtonExaminer

Senate Democrats on Tuesday will unveil a scaled-back version of a Biden administration proposal to crack down on wealthy tax cheats after conservative groups and the bank industry raised major privacy concerns, three people with knowledge of the coming announcement said. Initially, the Department of Treasury and Senate Democrats had...
PRESIDENTIAL ELECTION・11 HOURS AGO

The Treasury Secretary said the government will use "extraordinary measures" to stay funded, and it's "imperative" to find a longer-term solution.
CONGRESS & COURTS・11 HOURS AGO
eenews.net

Senate Democrats released nine spending bills this afternoon as a way to get fiscal 2022 negotiations moving with the House, which has approved most of its own spending measures. Senate Democrats are proposing $44.63 billion for Interior and environment programs, billions of dollars more than in fiscal 2021. A House-passed...
CONGRESS & COURTS・10 HOURS AGO
POLITICO

Those bills are already toast in the upper chamber, where Republican lawmakers are once again demanding that Pentagon funding and non-defense cash be boosted by the same amount.
WASHINGTON, DC・12 HOURS AGO
The Guardian

‘This is our last chance’: Biden urged to act as climate agenda hangs by a thread

With furious environmental activists at the gates of the White House, and congressional Democrats fretting that a priceless opportunity to tackle catastrophic global heating may be slipping away, Joe Biden is facing mounting pressure over a climate agenda that appears to be hanging by a thread. Biden’s allies have warned...
PRESIDENTIAL ELECTION・22 HOURS AGO

A showdown over the infrastructure bill and multi-trillion-dollar Build Back Better Act awaits for Democrats returning to Capitol Hill today. Follow Newsweek's liveblog for all the latest.
NEW YORK CITY, NY・1 DAY AGO
Seattle Times

WASHINGTON — Some House and Senate Democrats, smarting from a move by Sen. Joe Manchin, D-W.Va., to kill a major element of President Joe Biden’s climate plan, are switching to Plan B: a tax on carbon dioxide pollution. A carbon tax, in which polluting industries would pay a fee for...
CONGRESS & COURTS・2 DAYS AGO
KREX

WASHINGTON (AP) — President Joe Biden on Thursday signed into law a bill raising the nation’s debt limit until early December, delaying the prospect of an unprecedented federal default that would cause economic disaster. The House passed the $480 billion increase in the country’s borrowing ceiling on Tuesday after the Senate approved it on a party-line vote […]
CONGRESS & COURTS・3 DAYS AGO

WASHINGTON — House Speaker Nancy Pelosi could have been speaking for the majority of Democrats in Washington when she said on Tuesday that she was “very disappointed” that President Biden’s domestic agenda will have to be pared down because of opposition from Democratic Sens. Joe Manchin of West Virginia and Kyrsten Sinema of Arizona.
CONGRESS & COURTS・6 DAYS AGO
WashingtonExaminer

The bill heads to the White House, buying the US a little more time before it runs up against the edge of default again.
CONGRESS & COURTS・6 DAYS AGO
Detroit Free Press

House votes to raise debt ceiling, sending bill to Biden and setting up another fight over borrowing limit

WASHINGTON – The House passed legislation Tuesday raising the nation's debt ceiling for several weeks, allowing the government to keep paying its bills into early December and avoiding the economic chaos that would come if the U.S. defaulted. By extending the nation's borrowing limit for a few weeks, lawmakers set...
PRESIDENTIAL ELECTION・6 DAYS AGO

The House cleared a temporary debt limit bill Tuesday that will buy lawmakers a little more time to negotiate a longer-term solution and potentially remove the threat of a self-inflicted economic calamity before the midterm elections next November. Lawmakers voted 219-206 to adopt a rule for floor debate on unrelated...
CONGRESS & COURTS・6 DAYS AGO
WEHT/WTVW

Democrats and Republicans reached a deal to extend the debt limit last week, and the House is expected back in Washington on Tuesday to vote on that bill.
CONGRESS & COURTS・6 DAYS AGO
Washington Times

The House of Representatives narrowly passed a debt-ceiling increase on Tuesday, averting a default on U.S. debts until at least December when lawmakers will once again face a showdown on the issue. In a 219-206 vote that strictly followed party lines, the House used a special parliamentary procedure to pass...
CONGRESS & COURTS・6 DAYS AGO