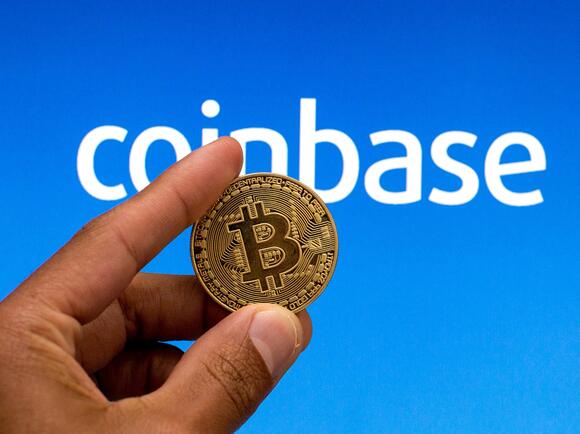 Coinbase fell as much as 5.7% on Monday amid a broader sell-off in the crypto and stock markets, intensified by news the crypto exchange would give up on a lending product after a tiff with the SEC .

The dip in Coinbase shares coincided with steep drops in the prices of nearly all major cryptocurrencies . Bitcoin and ether tumbled as much as 10.4% and 12.9%, respectively, as dogecoin, solana, and XRP plunged alongside the two biggest tokens.

Likewise, US stock markets declined sharply, with many analysts pinning the blame on the brewing liquidity crisis at Evergrande and the implications for China's economy.

But others pointed to US domestic policy as the proximate driver of Monday's dip.

"The Evergrande situation, although big and impactful, isn't the reason for this sell-off," said Jamie Cox of Harris Financial Group. "Rather, stalemates in Congress on the debt ceiling, worries on policy changes or mistakes in monetary policy, and a litany of proposed tax increases have dampened the mood for investors."

As Coinbase stock swooned, so did the company's bonds, which trade at junk levels. The bonds fell as low as 95.75 cents on the dollar as news emerged that the company was giving up on a lending product that the SEC had threatened to block by legal action .

The Coinbase bonds were already among the worst-performing newly issued debt, according to Bloomberg .

If China's economy keeps stumbling, it won't just take down Beijing - the whole world will collapse with it

Broad-market index ETFs can build great wealth over the long run. More focused ETFs may get you to a million dollars faster. You might invest in both kinds of ETFs. Retiring with a million dollars is a good goal. A larger or smaller sum might work well for you, but for many, if not most, of us, a million dollars will go far. If you apply the flawed-but-still-useful 4% rule to it, withdraw 4% of that million dollars in your first year of retirement, and adjust the withdrawal for inflation in each successive year, the money stands a good chance of supporting you for several decades. And that first 4% withdrawal will be... $40,000.
BUSINESS・1 DAY AGO
Markets Insider

6 reasons why the 'Great Resignation' is temporary and won't lead to inflation-induced weakness in stocks, according to Fundstrat

"Covid-19 itself is creating shortages in the labor market. If it recedes, this is merely a transitory shortage of labor," Fundstrat said.
PATCHOGUE, NY・10 HOURS AGO
Toni Koraza

The global economy is connected. Big events blow throughout the world like a monsoon, rising prices, and dropping local businesses like dominos. The economy is a reactionary phenomenon. One event leads to another. In 1929, the overleveraged stock market blew half the world economy to pieces. The world didn't recover for the next 15 years.
TEXAS STATE・2021-09-22

Worldcoin has scanned more than 100,000 people from different countries through a device called the Orb. The firm is currently valued at $1 billion.
MARKETS・1 DAY AGO
Markets Insider

"They're better just purchasing bitcoin than to play the futures game at this point," a private equity CEO said.
MARKETS・13 HOURS AGO
The Motley Fool

2 Unstoppable Stocks to Buy in the Next Market Crash

Historically, the market falls 10% about once every 20 months. Broad sell-offs often create buying opportunities for long-term investors. "Stock market crash" is a phrase no investor likes to hear, but it's a situation you will face sooner or later. Going back to 1928, the S&P 500 has fallen by 10% or more on 54 different occasions, approximately once every 1.7 years. At face value, that information may seem alarming, but consider the silver lining: Every past downturn has ended with the market hitting a new high.
STOCKS・12 HOURS AGO
Markets Insider

China's Evergrande crisis is shaking the entire property sector, causing defaults and stress across the board.
ECONOMY・1 DAY AGO

These are five stocks for aggressive investors looking to get share count leverage on companies that have sizable upside potential. While not suited for all investors, they are not penny stocks with absolutely no track record or liquidity, and Wall Street firms do have research coverage.
STOCKS・1 DAY AGO
GOBankingRates

Scott Minerd, global chief investment officer for financial firm Guggenheim, predicts that the stock market could drop 15% by November, according to a report by Business Insider. He blames the...
STOCKS・1 DAY AGO
moneyweek.com

Can anything stop rising inflation? asks Daniel Moss on Bloomberg. How about a Chinese slowdown? The world’s second-biggest economy grew at a record 18.3% year-on-year in the first quarter of the year but has slowed sharply. GDP rose by an annual 4.9% in the third quarter, the slowest pace in a year and down from the 7.9% rate recorded between April and June, says Katie Silver for the BBC. Soaring commodity prices have seen many provinces impose electricity rationing, which is weighing on industries such as cement, steel and aluminium smelting.
BUSINESS・2 DAYS AGO
CoinTelegraph

During an appearance at the Milken Institute conference, Wood also revealed what she thinks will be the "big, new frontier" in investing.
STOCKS・1 DAY AGO
GOBankingRates

It’s important to know what you’re getting into before you buy into cryptocurrency. Find out how these top picks compare and what to consider before investing.
STOCKS・1 DAY AGO
MarketWatch

Don’t dismiss what ultra-low dividend yields are telling us: We’re in for puny returns in the stock market

"We are not anywhere near done until the number one coin is a stablecoin," Emin Gün Sirer, CEO of Ava Labs, told Insider.
MARKETS・1 DAY AGO
GOBankingRates

There are plenty of alternatives to Bitcoin and other big-name cryptocurrencies. If you’re ready to invest in some crypto, consider these affordable options.
MARKETS・1 DAY AGO
Reuters

Oct 21 (Reuters) - A merger with former U.S. President Donald Trump's new social media venture has delivered a potential windfall of $420 million for a former finance executive who has been trying for a decade to reinvent himself as a serial dealmaker. Benessere Capital CEO Patrick Orlando's stake in...
POTUS・2 DAYS AGO
MarketWatch

Mark Cuban compares the crypto boom to the dot-com bubble, defends Robinhood, and calls for stablecoin regulation in a new interview. Here are the 10 best quotes.

The "Shark Tank" star and billionaire owner of the Dallas Mavericks celebrated how crypto has encouraged millions of young people to invest.
STOCKS・2 DAYS AGO