By Naomi Lim
WashingtonExaminer
26 days ago 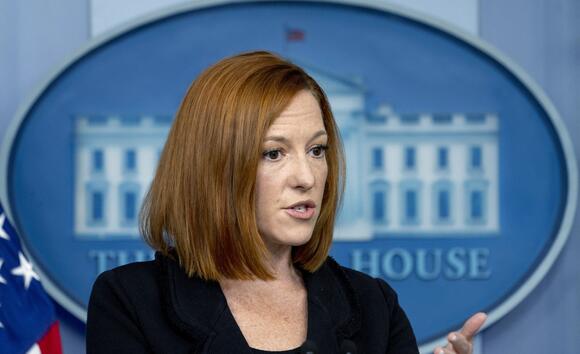 President Joe Biden still has not rescheduled a call with French President Emmanuel Macron as relations between the two countries deteriorate over a new national security alliance with the United Kingdom and Australia that cost France a billion-dollar submarine contract.

White House press secretary Jen Psaki confirmed the pair's aides are trying to connect the two leaders in "the coming days" amid the United Nations's 76th General Assembly meeting in New York. But she said she was "not aware" of administration attempts to compensate France after Australia reneged on its promise to buy 12 new diesel-electric submarines, opting to build nuclear-powered ones with the U.S. and U.K.

"Certainly, that is a factor for them domestically. We understand that, but I think you can expect the president's call to be more about reaffirming our commitment, the United States's commitment, to our alliance, to our partnership, and to working together on a range of issues, including security in the Indo-Pacific," Psaki told reporters Monday. "We're in active conversation about a call."

The incident has been embarrassing for Biden, who campaigned on his foreign policy experience before the 2020 election, assuring he would be a steady hand to voters and the world after the unpredictability of former President Donald Trump.

Biden will address the United Nations on Tuesday and is expected to underscore the importance of alliances after the Trump years, according to Psaki.

Biden will also implore the international community to start preparing for the next pandemic, counter climate change, and mitigate cybersecurity and terrorist risks together while emphasizing the need to protect democracy, Psaki said of Biden's New York remarks. But she dismissed that Biden's comments were ill-timed amid criticism over his lack of diplomacy during the withdrawal of U.S. service members from Afghanistan and the U.S-U.K.-Australia alliance announcement.

"The United States is not turning inward, including as we look to the decision the United States made, the president made, to bring our troops home from Afghanistan. Anyone who reads that in that way is not reading it accurately," she said. "You always have to work on your relationships."

Biden in talks with a foreign leader, 😆🤣😆🤣😆🤣😆😆🤣🤣🤣😆😆🤣 , will he have his teleprompter with him or are they going to whisper in his ear before he says anything , a 12 hour nap before the discussion

Has Fubar said one word about blowing up those children? Checked his watch at least? 😡

Putin told the CNBC reporter Hadley Gamble that she didn't seem to understand him when she asked him about a Russia-Europe standoff over gas supply.
GAS PRICE・2 DAYS AGO
The Independent

The leaders of Japan and South Korea spoke by phone on Friday, saying they would look to deepen ties in the face of regional security threats, despite badly strained bilateral relations.Although they share a key ally in the U.S. and common concerns over facing China, ties between Tokyo and Seoul have suffered over the legacy of Japan's World War II atrocities and disagreements over compensation for wartime Korean laborers during the Japanese occupation. Japan's new prime minister, Fumio Kishida, only spoke with Korean President Moon Jae-in after he'd spoken with a number of other world leaders, underlining chilly relations...
POLITICS・1 DAY AGO
AFP

A bitter transatlantic rift is over, the European Union's top diplomat declared Friday, a month after France was infuriated with the United States over losing a massive submarine contract in Australia. France last month recalled its ambassadors, accusing the United States of deceit and Australia of backstabbing, after Canberra scrapped a multi-billion-dollar contract for French conventional submarines.
MILITARY・1 DAY AGO
AFP

The European Union's diplomatic chief Josep Borrell said Friday he was "ready" to meet Iranian leaders in Brussels as part of efforts to revive the faltering 2015 nuclear deal, but warned Tehran it was time to fully return to the negotiating table. Wrapping up a trip to Washington, Borrell also brushed aside the notion of a "Plan B," or a possible military option as suggested this week by the United States and Israel, should Tehran fail to rejoin the accord aimed at keeping it from developing nuclear weapons. "I know that the Iranians want to have some kind of previous talks with me as coordinator and with some members of the board of the JCPOA," Borrell told reporters, referring to the Joint Comprehensive Plan of Action, as the deal is formally known. "I'm ready, I'm ready to do that," said Borrell. "But time is pressing."
U.S. POLITICS・1 DAY AGO

Greece, US expand defense pact in face of Turkey tensions

The United States and Greece signed a deal Thursday expanding their defense cooperation agreement to grant U.S. forces broader use of Greek bases, as that nation deals with tensions between it and neighboring Turkey The deal, signed in Washington by Secretary of State Antony Blinken and Greek Foreign Minister Nikos Dendias, will allow U.S. forces to train and operate "in an expanded capacity" at four additional bases in Greece, Dendias said.“This is not an agreement…against anybody else,” Dendias said in an interview with The Associated Press after the signing ceremony, although he noted the new agreement put a U.S....
U.S. POLITICS・2 DAYS AGO
The Conversation U.S.

France’s recent recall of its ambassador to the United States was an exceptional move in the long history of France-U.S. relations, which began with the 1778 treaties that created a military and commercial alliance between the two countries. In France, President Joe Biden’s Sept. 15, 2021 announcement of a new...
MILITARY・2 DAYS AGO
houstonianonline.com

France withdraws ambassadors from the United States and Australia

On Thursday, France withdrew its ambassadors from the United States and Australia in response to a military alliance between the two countries with the United Kingdom. This was stated by the French Foreign Minister Jean-Yves Le Drian, according to international news agencies. To balance China’s progress, the three Anglophone countries...
WORLD・3 DAYS AGO
Fox News

'Hannity' on Biden failing the US, Americans abandoned in Afghanistan

This is a rush transcript from "Hannity" October 12, 2021. This copy may not be in its final form and may be updated. SEAN HANNITY, FOX NEWS HOST: All right. And Tucker as always, thank you. Welcome to HANNITY. And tonight, Bezo, Boto, Bozo O'Rourke is back and not doing...
U.S. POLITICS・3 DAYS AGO

There is growing pressure on the new Aukus partners to scrap plans to use weapons-grade uranium on submarines. A group of former US officials and experts has written to the US president, Joe Biden, warning the deal could threaten US national security by encouraging hostile nations to obtain highly enriched uranium (HEU).
MILITARY・9 DAYS AGO
Telegraph

France on Saturday accused Britain of not paying the agreed money to prevent migrants and asylum-seekers from crossing the Channel. On a visit to Calais to inspect the situation at the border, Gerald Darmanin, the French interior minister, said the British government must honour the more than £50 million pounds it promised to pay French authorities to strengthen controls along the coastline.
POLITICS・7 DAYS AGO
realcleardefense.com

A Nuclear Submarine Deal That China Would Actually Respect

Why is it that we as a nation repeatedly sabotage our own plans at the starting block? We never learned from Iraq and Afghanistan that announcing troop surges, withdrawals or artificial deadlines undercuts our objectives by effectively signaling to our enemies that they can just wait us out. The Biden administration seems to be replaying this same game plan with the recent announcement of the AUKUS nuclear submarine deal with Australia and the United Kingdom.
MILITARY・8 DAYS AGO
newschain

France’s ambassador to Australia says officials in that country lied to his face and raised the risk of confrontation in Asia by crafting a secret submarine deal with the US and UK that undermined trust in democratic alliances. Jean-Pierre Thebault said France is determined to protect its interests in the...
MILITARY・8 DAYS AGO

NATO Secretary General Jens Stoltenberg said he was "absolutely confident" the allies involved would find a way to move on from the dispute.
MILITARY・9 DAYS AGO
The Guardian

The head of the French defence contractor Naval Group has reiterated the company’s “astonishment and stupefaction” at being told a multi-billion dollar submarine contract with Australia was being torn up hours after it was reassured the deal was on track. Pierre Eric Pommellet said the firm had been kept completely...
ECONOMY・9 DAYS AGO
mediaite.com

Special Presidential Envoy for Climate John Kerry said on Monday that President Joe Biden “literally had not been aware of what had transpired” in upsetting France over last month’s nuclear-powered submarine deal the United States and the United Kingdom struck with Australia. “President Biden asked me about it, and I...
WORLD・11 DAYS AGO
WashingtonExaminer

White House Press Secretary Jen Psaki attempted to walk back a statement by presidential climate envoy John Kerry which claimed President Joe Biden "had not been aware of what had transpired" following a submarine deal with Australia that upset the French. "Of course he was aware of the French being...
POTUS・10 DAYS AGO
whbl.com

France says row with Washington over submarines still not resolved

PARIS (Reuters) – A dispute between Paris and Washington over Australia’s decision to ditch a submarine procurement contract remains serious and unresolved, French Foreign Minister Jean-Yves Le Drian said on Wednesday, despite what he said were substantive talks in Paris with the top U.S. diplomat. The transatlantic row was triggered...
WASHINGTON STATE・10 DAYS AGO
wtaq.com

France sending envoy back to Australia to redefine relationship

PARIS (Reuters) -France will send its ambassador back to Australia to help redefine relations after withdrawing the envoy when Canberra ditched a defence accord with Paris in favour of a tie-up with Britain and the United States, its foreign minister said. France has accused its allies of stabbing it in...
AUSTRALIA・10 DAYS AGO
NebraskaTV

WASHINGTON (TND) — U.S. Special Presidential Envoy for Climate John Kerry said in a French television interview that President Joe Biden “had not been aware” of the French's anger over its exclusion from a security partnership, known as AUKUS, between the U.S., U.K. and Australia. The AUKUS deal, discussed and...
WORLD・11 DAYS AGO