Another weak U.S. jobs report may be ahead, JPM data suggests

By Dan Burns
Reuters
25 days ago 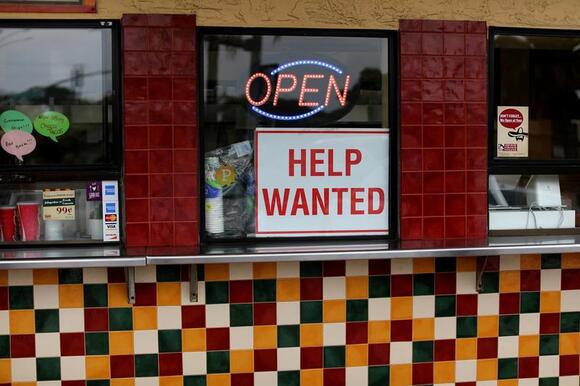 (Reuters) - A JPMorgan model that came closer than virtually all other forecasts in predicting last month’s big U.S. employment report shortfall is pointing to another weak jobs number for September as consumers appear to have dialed back their travel and leisure spending since Labor Day.

The jobs tracker created by the bank's quantitative research team, fed by a range of alternative data including Chase credit card usage and airport security check volumes, suggests that September job growth will come in at 333,000. That would be far from the kind of rebound from August's disappointing job growth of just 235,000 here - the lowest total since January - that policymakers at the Federal Reserve and elsewhere are hoping for.

Ahead of the August non-farm payrolls report from the Labor Department released Sept. 3, the JPMorgan research team’s model had estimated 353,000 new jobs would be added that month. That was lower than all 80 forecasts in a Reuters poll of economists that sported a median expectation of 728,000, as well as about half the 625,000 payrolls gain forecast by other economists at JPMorgan Chase.

The latest estimate from the quant team’s model is down by nearly a quarter million from two weeks ago, and tracks a drop-off in consumer outlays on things like airline travel and restaurants, based on Chase credit card usage data.

That dovetails with recent weakness that has surfaced in other data suggesting the spread of the Delta variant of the coronavirus is damping a range of economic activity that had surged through the spring and early summer on the back of COVID-19 vaccinations and what was then a substantial fall in infections. The United States averaged nearly 150,000 new tmsnrt.rs/3AtxnBh infections a day in the last week, according to a Reuters tracker, roughly 10 times the volume from early July.

Payroll tracking firm Homebase, for instance, showed the number of people working at small businesses fell for the eighth consecutive week for the period ending Sept. 12, based on a sample of around 50,000 establishments.

Figures from the Transportation Security Administration, meanwhile, showed that travelers clearing airport checkpoints in the past weekend fell to 72% of the 2019 level on a seven-day average basis, the lowest since mid-June.

The apparent lull comes as Fed officials convene their next monetary policy meeting on Tuesday and are expected to rejoin their ongoing debate over when and how to reduce the emergency support measures they put in place roughly 18 months ago, starting with a likely reduction in their asset purchases here later this year.

At their July meeting, officials said in their post-meeting statement that the economy had “made progress toward” their goals of maximum employment and inflation that averages 2% over time. A key question confronting them over the next two days will be whether they can agree on amending that statement to indicate they believe more progress has been made in the face of the latest surge in cases and data disappointments.

As the U.S. confronts rising inflation, slower job gains and a crippled supply chain, a new study finds that the Americans most in need of a stimulus check at the beginning of the pandemic continue to suffer most.
BUSINESS・1 DAY AGO
Imperial Valley Press Online

Employment reports for the MBA Class of 2021 are trickling in, carrying mostly good news for graduates of the top programs. The latest to reinforce the image of the MBA as strong and strengthening is New York University’s Stern School of Business, ranked 15th by Poets&Quants, which reports record numbers in key areas in its 2021 employment report released today (October 15).
EDUCATION・9 HOURS AGO
Forbes

The U.S. Economy May Be Facing Another Recession, New Research Suggests

The U.S. economy may be heading for another downturn within the next six months if sagging consumer expectations are any guide, according to new research from ex-Bank of England member David Blanchflower. It’s a counterintuitive prediction given all the talk of recovery and inflation fears permeating the economic debate at...
BUSINESS・1 DAY AGO

Richmond Fed President Tom Barkin said Friday his "instinct" was to start to slowing down asset purchases in November, but said he would listen to the debate at the central bank's next policy meeting on Nov. 2-3.
POLITICS・12 HOURS AGO
MarketWatch

The cost of imported goods rose again in September largely because of higher oil prices, adding to a surge in U.S. inflation that's the biggest in decades.
NEW YORK CITY, NY・11 HOURS AGO
MarketWatch

US unemployment claims fall to lowest level since pandemic

WASHINGTON (AP) — The number of Americans applying for unemployment benefits fell to its lowest level since the pandemic began, a sign the job market is still improving even as hiring has slowed in the past two months. Unemployment claims dropped 36,000 to 293,000 last week, the second straight drop, the Labor Department said Thursday. […]
PUBLIC HEALTH・1 DAY AGO

Inflation at the wholesale level rose 8.6% in September compared to a year ago, the largest advance since the 12-month change was first calculated in 2010. The Labor Department reported Thursday that the monthly increase in its producer price index, which measures inflationary pressures before they reach consumers, was 0.5% for September compared to a […]
LOS ANGELES, CA・1 DAY AGO
ABC Big 2 News

One reason America's employers are having trouble filling jobs was starkly illustrated in a report Tuesday: Americans are quitting in droves.
ECONOMY・1 DAY AGO
AFP

Fed officials lean towards stimulus pullback as soon as November

Unless the US economic situation changes dramatically, Federal Reserve officials are leaning towards cutting back on monetary stimulus as soon as November, according to a central bank document released Wednesday. The date when the Fed will pull back on its monthly bond purchases has been a closely watched topic for months, and the policy-setting Federal Open Market Committee (FOMC) last month indicated the time could come "soon." The minutes of the FOMC meeting released Wednesday showed officials speaking positively of plans to begin cutting back on the bond purchases as soon as after their next meeting scheduled for November and end it by mid-2022. Officials indicated that "provided that the economic recovery remained broadly on track, a gradual tapering process that concluded around the middle of next year would likely be appropriate," according to the minutes.
BUSINESS・2 DAYS AGO
NBC Philadelphia

New applications for US unemployment benefits dipped below 300,000 for the first time since the pandemic began, a milestone in the labor market's recovery from the devastation wrought by the virus last year. - Delta's toll - Applications from workers seeking jobless benefits remained elevated for much of 2020 before vaccines brought a decisive decline this year, though the fast-spreading Delta variant's wave of infections arrested that progress in recent weeks.
U.S. POLITICS・1 DAY AGO
MarketWatch

Longer dated Treasury yields from 7 years and out were moving lower on Wednesday, while the spread between 2- and 10-year rates narrowed following the U.S. September's CPI report.
SAN FRANCISCO, CA・2 DAYS AGO
MarketWatch

The Merck pill, so far, hasn't made a big dent on financial markets.
MARKETS・2 DAYS AGO
Reuters

Oct 13 (Reuters) - The Federal Reserve signaled on Wednesday it could start reducing its crisis-era support for the U.S. economy by the middle of next month, with a growing number of its policymakers worried that high inflation could persist longer than previously thought. Though no decision on a "taper"...
BUSINESS・2 DAYS AGO
FOX40

WASHINGTON (AP) — Another surge in consumer prices in September pushed inflation up 5.4% from where it was a year ago, matching the highest shift higher since 2008 as tangled global supply lines continue to create havoc. U.S. consumer prices rose 0.4% in September from August as the costs of new cars, food, gas, and […]
BUSINESS・2 DAYS AGO
MarketWatch

Social Security benefits to jump 5.9% in 2022 in biggest increase in 40 years

Retired Americans who collect Social Security are about to get the biggest "raise" in 40 years: A 5.9% increase in their monthly payments starting in January.
BUSINESS・2 DAYS AGO
marketpulse.com

Aussie flat ahead of job reports

The Australian dollar is in a holding pattern in Wednesday trading. Currently, AUD/USD is trading at 0.7356, down 0.10% on the day. The Australian dollar is treading in calm waters, but that could change later in the day, with the release of key numbers out of Australia and the US. First, the US releases inflation for September. Inflation fears are getting stronger, as CPI has hit a 30-year high. In August, headline CPI came in at 5.3% and core CPI at 4.0 (YoY).
BUSINESS・2 DAYS AGO