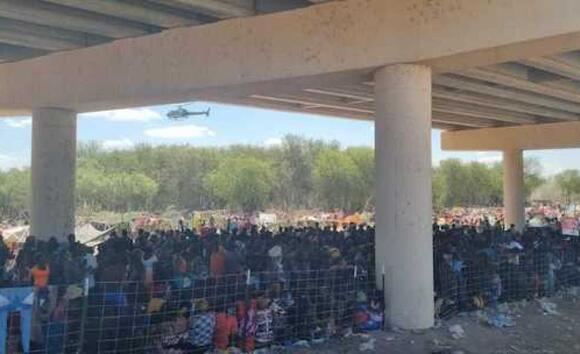 The White House defended its policy on dealing with undocumented migrants and COVID-19 hours after announcing that international travel restrictions would be loosened for the fully vaccinated, saying illegal immigration is “not the same.”

President Joe Biden’s team had announced earlier on Monday that fully vaccinated travelers would soon be permitted to fly into the United States. Press secretary Jen Psaki was asked why similar protocols do not apply to the migrant surge at the southern border .

Fox News’s Peter Doocy pressed Psaki on whether the migrants arriving at 20-year highs are being asked to provide proof of vaccination status or a negative test.

"That's the policy for people who fly into the country," Doocy said. "So why if somebody walks into the country right across the river, does somebody ask them to see their vaccination card?"

"Let me explain to you again, Peter, how our process works," Psaki replied. "As individuals come across the border, they are both assessed for whether they have any symptoms. If they have symptoms, the intention is for them to be quarantined. That is our process."

Challenged on whether this is inconsistent with requiring lawful international travelers to provide proof of vaccination, Psaki denied that the two situations are analogous. “They're not intending to stay here for a lengthy period of time,” she said of the migrants. “It's not the same thing."

The Biden administration had faced pressure to revisit the travel restrictions, especially from the European Union and United Kingdom, after deciding to leave them in place in July. It was widely speculated that the decision was timed to ease tensions over a series of diplomatic rows with European allies.

White House coronavirus coordinator Jeff Zients suggested to reporters on Monday that the change was timed to coincide with improved vaccination rates abroad. Psaki attributed the shift to the conclusions reached by Biden administration working groups studying the issue.

Psaki was also questioned about images showing Border Patrol agents rounding up Haitian migrants who have entered Del Rio, Texas, in large numbers and asked whether it was safe to deport them to their home country, which has been plagued by earthquakes and political turmoil.

The White House press secretary declined to defend the border patrol pictures, in which horseback-riding agents appear to wield lassos or whips, but also said the law would be enforced and she would need more information.

“I don't have the full context,” Psaki said, adding, “I can't imagine what context would make that appropriate.”

The Biden administration announced through the Department of Homeland Security on Saturday that it would move to expel a number of the Haitian migrants, many of whom had arrived from third countries.

"The Biden Administration has reiterated that our borders are not open, and people should not make the dangerous journey. Individuals and families are subject to border restrictions, including expulsion," DHS said in a statement. "Irregular migration poses a significant threat to the health and welfare of border communities and to the lives of migrants themselves, and should not be attempted."

Immigration has consistently been one of the issues for which Biden has received his lowest marks in the polls, as his administration has failed to grapple with the crisis at the border.

Biden’s numbers on COVID-19 had been the high point, anchoring overall job approval ratings above 50%. But now, even Biden's support there is down and his approval as a whole is underwater.

"White House: Migrants don't need travelers' vaccine proof because 'they're not intending to stay'"...Well...if that's the case then international vacationers here shouldn't need it either...It's impossible to keep up with Joe's contradictions, is it?

Don't intend to stay???? 30 or 40 years isn't intending to stay. Make no mistake none of the Non-Mexican Centrals ever plan on going home. They will drain our resources the whole time. 2+ million and another 500,000 unaccompanied minors. Does Biden know Central America is not part of the U.S. and all we owe them is NOTHING.

So the invading aliens are not planning to stay? Well now I feel so much better, in their is longer a need to feed, clothe them or bus them around. Now we can just have armed troops with machine guns persuade them nicely to leave or else. Maybe Al Capone was right in that we can get more done with a kind word and a gun than with just a kind word

The White House defended President Joe Biden's knowledge of the situation at the southwestern border during Friday's press briefing, which followed a town hall meeting in which he appeared to acknowledge he was due for another visit.
PRESIDENTIAL ELECTION・4 DAYS AGO
WashingtonExaminer

President Joe Biden’s open borders policy is expected to lure some 2.1 million illegal immigrants across the US.-Mexico line — 500,000 more than the previous record and a sure bet to kill his goal of amnesty for the 11 million already in the country.
POTUS・15 HOURS AGO
WashingtonExaminer

The president is scheduled to attend a United Nations conference on climate change on Monday and Tuesday of next week.
WHITE HOUSE, TN・5 HOURS AGO

WASHINGTON (Reuters) - U.S. President Joe Biden is issuing an order on Monday imposing new vaccine requirements for most foreign nationals traveling to the United States by air effective Nov. 8, the White House said. Biden is also lifting restrictions in place since early 2020 that have barred most non-U.S....
TRAVEL・1 DAY AGO
Birmingham Star

Washington [US], October 15 (ANI): Foreign travellers, who are fully vaccinated against COVID-19, will be able to enter the US from November 8, the White House said on Friday. Kevin Munoz, White House Press Secretary, said that this announcement applies to both international air travel and land travel. "This policy...
11 DAYS AGO
The Independent

US travel rules: Under 18s won’t need to be vaccinated to visit the States

The US has confirmed that under 18s won’t need to be vaccinated in order to travel there when the country reopens to Brits and other nationalities next month.From 8 November, the blanket travel ban that has been in place for those in the UK, Europe and various other destinations since March 2020 is set to be lifted for the fully vaccinated.However, President Joe Biden has now given more information on the rules that will be in place for international arrivals – and minors are exempt from the vaccination requirement.Under 18s need not be vaccinated, though children between the ages of...
TRAVEL・20 HOURS AGO
MassLive.com

Since December of 2020, more than three-quarters of the United States’ 12-and-up population has received a vaccination for COVID, whether at a mass-vaccination site, a pop-up clinic or a local pharmacy. But for kids between ages 5 and 11, who soon could be approved for the shots by the Food...
PUBLIC HEALTH・6 DAYS AGO

Why does White House stay silent on migrant flights?: Devine

If President Biden thought illegal migrants were Republican voters, you know the southern border would be slammed shut tomorrow. Instead, his administration is not even trying to stem the flood of border crossings. It has only become more efficient at dispersing the migrants covertly throughout the country to avoid the optics of overcrowded detention facilities.
6 DAYS AGO
Newsweek

US citizens will need vaccine or negative test to enter America

US citizens returning from abroad will still need to provide proof of having received a Covid-19 vaccine if they want to avoid more stringent testing requirements, White House officials said.On Monday, President Joe Biden is set to sign a presidential proclamation implementing new vaccination and testing requirements for entry into the United States. The new requirements, which will be in force as of 8 November, will require all non-citizen, non-immigrant travelers to the US to be vaccinated against Covid-19 unless they are under 18 or a country that the Centers for Disease Control determines to have low vaccine availability.But while...
U.S. POLITICS・1 DAY AGO
News 8 WROC

There is one bright spot for Biden. He is eclipsing other presidents when it comes to confirming judicial nominees. The Senate has confirmed 16 district and circuit court judges as of Oct, 13, matching the combined total for Bush, Obama and Trump by that date.
PRESIDENTIAL ELECTION・1 DAY AGO

As parents await the decision of federal regulators to authorize the Pfizer-BioNTech COVID-19 vaccine for children ages 5 to 11, the Biden administration says it’s ready to mobilize doses as soon as it gets the green light. In a media briefing Wednesday, officials revealed a comprehensive plan to supply enough...
6 DAYS AGO
Daily Mail

Jen Psaki says Gov. Greg Abbott banned vaccine mandates because of 'politics', says White House will STILL force rules on businesses and says it has nothing to do with worker shortages or the Southwest strike

Good morning. Thanks to all the readers who sent in suggestions for what Theo should do with his fridge full of apples (and there were a lot of you). He'll report back on what he ends up making this weekend. In the meantime: Keep those tips coming: earlytips@washpost.com. 🚨: “Immigration...
POTUS・19 HOURS AGO
The Independent

Arizona Democratic Senator Kyrsten Sinema apologised to her GOP colleague, South Carolina Senator Tim Scott, as one of her constituents attempted to ask her questions at an airport. It was the second time that Ms Sinema has been confronted at an airport this month. “I’m from Tucson, Arizona, and I’m wondering, I know you’ve met with dozens of lobbyists—” the woman said during the interaction that was captured on video before being cut off by Ms Sinema. “Please don’t touch me,” the senator told the woman. “I did not touch you,” she responded, adding: “I know you’re meeting with...
CONGRESS & COURTS・13 HOURS AGO
CNBC

Two stocks linked to Donald Trump dropped in trading shortly after the ex-president detailed plans for one of the companies, and the other firm said it would sell additional shares to raise capital. The big pullbacks for the SPAC Digital World Acquisition Corp., and Phunware came after both companies saw...
STOCKS・14 HOURS AGO
Daily Beast

The Harshest Punishment Paul Gosar Could Get for Jan. 6

Paul Gosar has been basically caught red-handed. According to bombshell reporting from Hunter Walker for Rolling Stone, the far-right Arizona congressman promised Jan. 6 rioters blanket “pardons.” Not only that, but according to Walker, he was so confident about those pardons he called them a “done deal.”. Walker tells The...
U.S. POLITICS・21 HOURS AGO