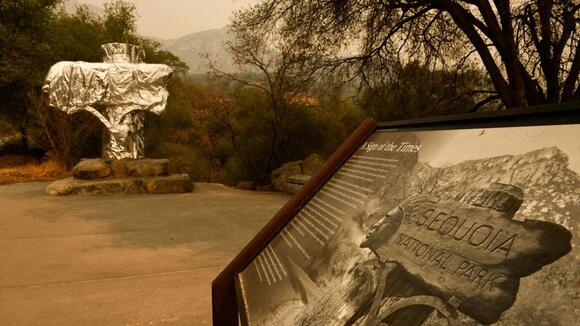 VENTURA (CBSLA) — Smell that? The all-too-familiar, dreaded odor of brush fire smoke is in the air, but the source is coming wildfires burning in Northern California, hundreds of miles away.

The Ventura County Fire Department sent out a tweet Monday morning to let people know that a northwest breeze is pushing smoke from fires in Northern California.

“Noticing smoke in the sky? Do not be alarmed. This is drift smoke caused by the shifting winds,” the fire department tweeted.

The National Weather Service confirmed that winds were carrying smoke from Northern California to the south.

“Widespread haze and smoke was encompassing most of SW California due to large wildfires in the southern Sierra Nevada Mtns,” the NWS tweeted. “Air quality is a moderate concern.” 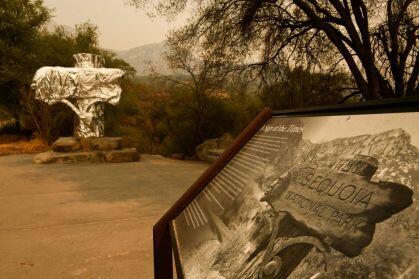 The Sequoia National Park historic park entrance sign wrapped in fire resistant foil stands along Generals Highway during a media tour of the KNP Complex fire in the Sequoia National Park near Three Rivers, California on September 18, 2021. – Firefighters battling to protect the world’s biggest tree from wildfires ravaging the parched United States said September 17 that they are optimistic it can be saved. Crews are battling the KNP Complex fire, comprised of the spreading Paradise and Colony fires, which have so far consumed 4,600 hectares (11,400 acres) of forest since they were sparked by lightning a week ago. (Photo by Patrick T. FALLON / AFP) (Photo by PATRICK T. FALLON/AFP via Getty Images)

A number of wildfires are burning in Northern California at the moment, but the most concerning at the moment is the lightning-sparked KNP Complex fire that’s threatening one of the state’s most iconic features – giant Sequoia trees. Sequoia and Kings Canyon National Park have been closed to visitors and a large swath of Northern California was under a red flag warning for extreme fire danger Monday.

The red flag warning has not been extended into Southern California, but weak Santa Ana winds and rising temperatures could elevate the risk of wildfires.

LOS ANGELES (CBSLA) — Rain is coming to California, and there could be a lot of it. Widespread rain appears to be shaping up for Sunday into Monday, particularly for San Luis Obispo and Santa Barbara County. NOAA forecasters are predicting “high probabilities of precipitation” for much of the northwest, California and Nevada. Next week’s outlook by @NOAA’s @NWSCPC shows high probabilities of precipitation hitting parts of the drought-stricken Northwest and CA/NV. SoCal looks relatively cool too. It looks relatively warm and dry for almost all of the rest of the Lower 48.https://t.co/PSK6cCJBRU pic.twitter.com/FnfCKHgpmw — NIDIS Drought.gov (@DroughtGov) October 14, 2021 A precipitation outlook map...
CALIFORNIA STATE・16 HOURS AGO
CBS LA

LOS ANGELES (CBSLA) — Southern California woke up Monday to its version of fall weather – drizzly, light rain, overcast skies, and cool temperatures. Light rain and drizzle fell across several areas of Southern California Monday morning, a welcome respite after a much warmer weekend accompanied by dry Santa Ana winds. The precipitation may have led to slick roads, contributing to at least one 4-car pileup on the northbound 101 Freeway at Barham in Hollywood. According to the National Weather Forecast, the clouds will clear out by late morning on Monday, which is also expected to be the coolest day of the...
LOS ANGELES, CA・2 DAYS AGO
CBS LA

HIGHLAND PARK (CBSLA) – The largest tiny home village in the country and in California, which will serve as interim housing for people experiencing homeless, was set to open Thursday in Highland Park. This latest tiny home community is one of about a half dozen around the city that are accommodating about 1,000 people struggling with homelessness. City leaders said that the tiny home villages are a step in the right direction toward fighting the homeless crisis. In the Highland Park, each of the tiny homes have the option for one or two beds. There’s air-conditioning, heating and quilts made by local...
CALIFORNIA STATE・6 HOURS AGO
CBS LA

SACRAMENTO (CBSLA) – Gov. Gavin Newsom has extended his drought emergency declaration statewide, now wrapping in the counties of Los Angeles, Orange, Riverside, San Diego, San Bernardino, Ventura, Imperial and San Francisco. Those eight counties had been excluded from the original emergency declaration, but with water conservation efforts falling short statewide, Newsom says “it’s critical that Californians across the state redouble our efforts to save water in every way possible.” California has recorded its driest year in nearly a century, according to a report from the California Department of Water Resources. The most recent water year, a 12-month period that runs from October 1 to September 30 that’s used to measure surface water, saw 11.87 inches of rain and snow.
LOS ANGELES, CA・1 DAY AGO
CBS LA

652 People Sickened With Salmonella Traced Back To Whole Onions Imported From Chihuahua, Mexico

LOS ANGELES (CBSLA) — A multistate outbreak of salmonella has been linked to whole onions from Chihuahua, Mexico. The CDC says they have identified whole onions as a source of salmonella infections that have sickened 652 people in 37 states, including nine from California. No deaths have been reported, but 129 people have been hospitalized. (credit: CDC) One source of the infections in this outbreak have been traced back to whole red, white, and yellow onions imported from Chihuahua, Mexico and distributed in the U.S. by ProSource Inc. ProSource was determined to have supplied whole onions to many of the restaurants where people...
PUBLIC HEALTH・12 HOURS AGO
CBS LA

WILMINGTON (CBSLA) — With the ports of Los Angeles and Long Beach now running 24/7 operations, a new problem has occurred. Many of the shipping containers that spent weeks onboard ships waiting to be unloaded are now being dumped in nearby neighborhoods once they’re emptied. Sonia Cervantes lives along Anaheim Street, where UCTI Trucking Company is located. The company’s lot only has a capacity for 65 containers so the additional containers now line up along Anaheim Street in front of some people’s homes. “It’s a bunch of neighbors that are very upset because it’s a non-stop situation,” said Cervantes. “I would have to go...
LOS ANGELES, CA・2 DAYS AGO

Overturned Big Rig Spills About 3,000 Gallons Of Antifreeze Onto Freeway

LOS ANGELES (CBSLA) — An overturned tanker truck spilled about 3,000 gallons of antifreeze onto the Golden State (5) Freeway near Dodger Stadium Monday, prompting a closure of the area as authorities cleaned the spillage. The collision was reported at about 4:40 p.m. on the southbound Golden State Freeway transition road to the southbound Arroyo Seco (110) Parkway, according to Brian Humphrey of the Los Angeles Fire Department. A report from the California Highway Patrol later said the driver of a 2009 freightliner making its way south from the southbound 5 Freeway to the 110 south made an unsafe turning movement...
LOS ANGELES, CA・1 DAY AGO
CBS LA

LOS ANGELES (CBSLA) – Firefighters have been working to get ahead of the first red flag warning of the fall for Los Angeles and Ventura Counties. Strong Santa Ana winds, hot temperatures and low humidity were expected to arrive Friday. The National Weather Service issued a red flag warning for most of the region which took effect at 6 a.m. Friday, and will remain in place through at least 8 p.m. Saturday. Alisal Fire 9credit: CBS) While fire crews have made good progress on the Alisal fire burning for a fifth day in Santa Barbara County, this latest warning could cause additional problems. “We...
LOS ANGELES, CA・5 DAYS AGO
CBS LA

LOS ANGELES (CBSLA) — Ticketholders to a Filipino festival that was supposed to happen over the weekend are calling it the newest “Fyre Festival” after it was canceled without any notice to people who paid for tickets. “It was really frustrating,” said Kemaya Nguyen, a ticket holder. “To find out, not to receive any notice that it was canceled, was pretty disappointing. I felt scammed a little bit.” FAHMFest was advertised on Facebook and Instagram throughout the spring and summer, promising to be a “one-of-a-kind” festival celebrating Filipino food, music and fashion. According to the event page on feverup.com, general admission tickets...
CELEBRATIONS・1 DAY AGO
CBS LA

LOS ANGELES (CBSLA) – Three days after county crews started spraying deodorizer over rotting growth in the Dominguez Channel, Carson residents said they haven’t noticed any improvements. Residents now put the stench somewhere between “meat that is just decaying” and “the most disgusting sewer waste,” they told CBSLA Monday. In other words, the odor neutralizer hasn’t worked yet and locals aren’t holding their breath that it will. They say what’s making them equally sick to their stomachs is the city and county’s response, including taking almost a week to get air purifiers and filters for residents and taking nearly two weeks to...
CARSON, CA・2 DAYS AGO

Fire Risk High As Winds Whip Up In Fontana

FONTANA (CBSLA) — There are plenty of swaying trees and blowing dust as the wind continues to pick up speed and strength in parts of Southern California. Strong gusts have made everyday tasks more difficult for a lot of people. “We find our furniture on the other side of the street. Our trashcans are all over the place. Everything is flying around, it’s horrible…” said Fontana resident Nora Anderson. The strong winds mark the beginning of a dangerous rise in fire weather across the Southland. “We’ve seen fires in this region already burn several hundred acres without wind,” said Eric Sherwin of the San...
FONTANA, CA・5 DAYS AGO
CBS LA

SANTA BARBARA (CBSLA) – Hundreds of firefighters were making significant progress in their battle against a large wildfire which has been burning west of Santa Barbara all week. Damage from the Alisal Fire burning in Santa Barbara County. Oct. 15, 2021. (Mike Eliason/Santa Barbara County Fire Department/Twitter) The Alisal Fire, which has scorched 16,901 acres, was 41% contained Friday morning, according to the U.S. Forest Service, up from just 5% containment Thursday. The fire has destroyed three homes and two outbuildings, according to Santa Barbara County Fire Department spokesperson Mike Eliason. At the height of the fire, 439 structures were threatened. Highway 101, which...
SANTA BARBARA COUNTY, CA・5 DAYS AGO
CBS LA

LOS ANGELES (CBSLA) – A company in California’s Central Valley is transforming its almond shells into plant food. KCRA-TV reports that Merced-based ag-tech company Corigin Solutions is using a process known as pyrolosis which involves superheating almond shells. Doing so produces two byproducts. One is known as biochar. The other is a distilled liquid which can be used by farmers to help crops grow faster. Combined, it’s a recipe to help fight climate change and help the Central Valley agricultural economy. “That’s a win for us as consumers, a win for the farmer’s budget, and certainly a win for society,” Corigin CEO Mike Woelk told KCRA-TV. Pyrolosis may also help drive down agricultural costs because farmers would rely less on synthetic fertilizer.
CALIFORNIA STATE・5 DAYS AGO
CBS LA

DEL REY (CBSLA) – Crews repaired a water main that ruptured Saturday in Del Rey affecting services in the area and at least one fire hydrant, authorities said. The water main break in the 11600 block of Culver Boulevard occurred at 1:13 a.m. forcing eastbound and westbound closures of Culver Boulevard, between Dawes and Berryman avenues, according to the Department of Water and Power spokesman Albert Rodriguez. Water in the affected area was shut down at 5:25 a.m., Rodriguez said, and the estimated time of the water main repair is eight hours. DWP was able to divert water from the broken main to other pipes, while the repairs were underway.
DEL REY, CA・4 DAYS AGO