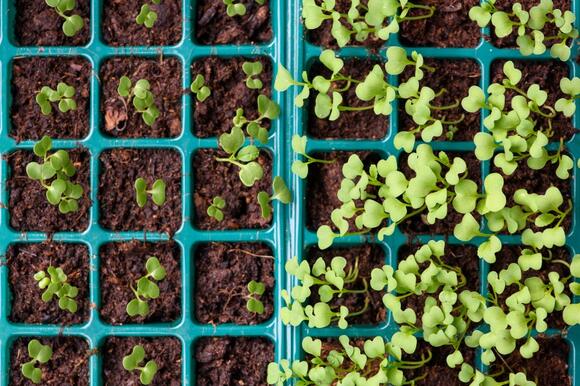 (StudyFinds.org) – Vaccinations can be a controversial subject for many people, especially when it comes to injections. So what if you could replace your next shot with a salad instead? Researchers at the University of California-Riverside are working on a way to grow edible plants that carry the same medication as an mRNA vaccine.

The COVID-19 vaccine is one of the many inoculations which use messenger RNA (mRNA) technology to defeat viruses. They work by teaching cells from the immune system to recognize and attack a certain infectious disease. Unfortunately, mRNA vaccines have to stay in cold storage until use or they lose stability. The UC-Riverside team says if they’re successful, the public could eat plant-based mRNA vaccines — which could also survive at room temperature.

Thanks to a $500,000 grant from the National Science Foundation, researchers are now looking to accomplish three goals. First, the team will try to successfully deliver DNA containing mRNA vaccines into plant cells, where they can replicate. Next, the study authors want to show that plants can actually produce enough mRNA to replace a traditional injection. Finally, the team will need to determine the right dosage people will need to eat to properly replace vaccinations.

“Ideally, a single plant would produce enough mRNA to vaccinate a single person,” says Juan Pablo Giraldo, an associate professor in UCR’s Department of Botany and Plant Sciences, in a university release.

“We are testing this approach with spinach and lettuce and have long-term goals of people growing it in their own gardens,” Giraldo adds. “Farmers could also eventually grow entire fields of it.”

Giraldo and a team of scientists from UC-San Diego and Carnegie Mellon University say the key to making edible vaccines are chloroplasts. These are small organs inside plant cells which help convert sunlight into energy.

Previous studies have shown that it’s possible for chloroplasts to express genes that are not a natural part of that plant. Giraldo’s team accomplished this by sending genetic material inside of a protective casing into plant cells.

Flu and COVID-19: Can you combine the vaccines this year?

In the new study, Giraldo teamed with UC-San Diego’s Professor Nicole Steinmetz to use nanotechnology to deliver more genetic material into chloroplasts.

“Our idea is to repurpose naturally occurring nanoparticles, namely plant viruses, for gene delivery to plants ,” Steinmetz says. “Some engineering goes into this to make the nanoparticles go to the chloroplasts and also to render them non-infectious toward the plants.”

“One of the reasons I started working in nanotechnology was so I could apply it to plants and create new technology solutions. Not just for food, but for high-value products as well, like pharmaceuticals,” Giraldo adds.

Will new variants of the coronavirus keep appearing?

Experts are watching to see whether emerging variants could be better at evading the protection people develop from vaccination and infection
DEL CITY, OK・23 HOURS AGO
KFOR

The kidney for this experiment came from a gene-edited animal
OKLAHOMA COUNTY, OK・1 DAY AGO
KFOR

Health officials say dozens of Oklahomans have been infected with salmonella as part of a fast-growing outbreak.
OKLAHOMA STATE・19 HOURS AGO
KFOR

A salmonella outbreak that has been traced to 37 states across the country is being caused by fresh whole onions, the Centers for Disease Control and Prevention (CDC) said in an update Wednesday.
OKLAHOMA CITY, OK・1 DAY AGO

The additional assistance is available to all 42 million SNAP beneficiaries.
BUSINESS・14 HOURS AGO
KFOR

What are side effects of the flu shot?

If you're planning on getting a flu vaccine, there's a chance you could experience side effects.
OKLAHOMA CITY, OK・1 DAY AGO
KFOR

The Cherokee Nation unveiled plans to spend over $10 million on a wellness facility in Stilwell, the first major project under the tribe's new Public Health and Wellness Fund Act.
STILWELL, OK・1 DAY AGO
KFOR

Millions more Americans are closer to getting a COVID-19 booster as influential government advisers on Thursday endorsed extra doses of all three of the nation’s vaccines.
HEALTH・12 HOURS AGO

What the Alzheimer’s Walk will look like this year

Saturday morning the stage area of Scissortail Park, with its spectacular background of downtown Oklahoma City, will be filled with your friends and neighbors walking in a show of support to end the cruel disease of Alzheimer’s and dementia.
OKLAHOMA CITY, OK・2 DAYS AGO
KFOR

Last week, the US Food and Drug Administration authorized the sale of e-cigarette products for the first time ever. The American Lung Association expressed displeasure, saying they are "dismayed" by the authorization.
PUBLIC HEALTH・1 DAY AGO
KFOR

The Chickasaw Nation unveiled plans for $300 million resort-style development along the Oklahoma River and right next to the First Americans Museum.
OKLAHOMA STATE・14 HOURS AGO

What Americans fear most, according to their Google searches

From clowns to public speaking, people have a wide range of phobias that keep them up at night.
HEALTH・20 HOURS AGO
KFOR

U.S. regulators on Wednesday signed off on extending COVID-19 boosters to Americans who got the Moderna or Johnson & Johnson vaccine and said anyone eligible for an extra dose can get a brand different from the one they received initially.
PUBLIC HEALTH・1 DAY AGO
KFOR

Since the First Americans Museum opened to the public last month, it has been a huge success and now the Chickasaw Nation says it is preparing for a new project.
OKLAHOMA CITY, OK・22 HOURS AGO
KFOR

The nationwide campaign will not look like the start of the country's vaccine rollout 10 months ago.
POTUS・1 DAY AGO
KFOR

Climate experts at the National Oceanic and Atmospheric Administration have put together what they believe is the most likely weather pattern we'll see when it comes to temperatures, rain, snow and La Niña this winter.
ENVIRONMENT・18 HOURS AGO
KFOR

New COVID-19 subvariant is spreading in UK: What we know

A new offshoot of the COVID-19 delta variant was responsible for approximately 6% of cases in the U.K. as of late September, according to officials with the U.K. Health Security Agency.
OKLAHOMA CITY, OK・1 DAY AGO
KFOR

CNN's John King revealed on Tuesday he has multiple sclerosis and is immunocompromised during a conversation about how vaccines help protect vulnerable people like himself.
OKLAHOMA CITY, OK・1 DAY AGO