PSG Confirms Messi Knee Injury After Star Was Substituted Off vs. Lyon 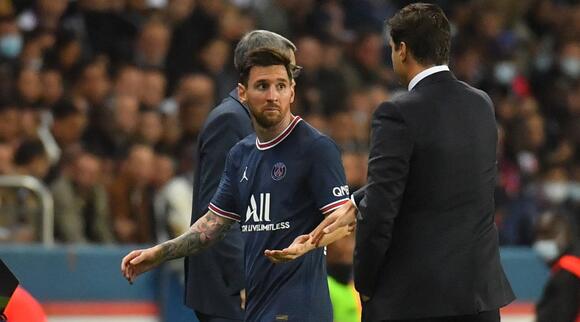 Despite struggling with a knee issue, Lionel Messi was visibly upset toward PSG manager Mauricio Pochettino for subbing him off vs Lyon on Sunday.

PSG star Lionel Messi is being treated for a knock to his knee that he sustained in the club's 2-1 win over Lyon on Sunday, according to L’Équipe , something that PSG confirmed on Tuesday.

Messi was visibly unhappy with PSG manager Mauricio Pochettino for subbing him off in the 76th minute, snubbing his handshake as he walked off the field. After rubbing his knee and working out his leg on the field, Messi signaled to the bench that he was fine to continue, but Pochettino opted not to take the risk given PSG's busy schedule.

"Everyone knows we have great players in the squad, but we have 35 players," Pochettino said in a post-match press conference . "But we must make decisions for the good of the team.

"Sometimes the players agree and sometimes they don't. We spoke about it and I asked him how he was, and he said he was fine."

Messi reportedly spent Monday's training session receiving treatment, and PSG announced that he'll miss Wednesday's trip to Metz that is part of a busy stretch of matches. PSG also has a weekend match against Montpellier, before next Tuesday's Champions League showdown with Manchester City at the Parc des Princes.

"Lionel Messi, who took a knock to his left knee against Lyon, underwent an MRI on Tuesday morning which confirmed signs of bruising of the bone. A follow-up examination will be carried out in 48 hours," PSG said.

Messi is still seeking his first goal since joining PSG on a free transfer from Barcelona this summer. Messi came closest in the 37th minute when his free kick from 30 yards out swerved across goal and hit the crossbar, much to the dismay of PSG fans watching the Argentine star make his home debut.

From Melbourne injury misery to Messi and Man City: Scotland's Jack Hendry is shining for Club Bruges in the Champions League and helped keep PSG's daunting frontline quiet... next up it's Pep Guardiola's star-studded side

He kept Lionel Messi quiet on his Champions League debut, has pushed Scotland to within a whisker of the World Cup play-offs, and hopes to spring an upset against Manchester City. Yet just over a year ago, Bruges defender Jack Hendry could have been forgiven for thinking he would never...
WORLD・8 DAYS AGO
NJ.com

PSG, led by forwards Lionel Messi, Neymar and Kylian Mbappe, faces Angers in a Ligue 1 match at the Parc des Princes in Paris, France, on Friday, October 15, 2021 (10/15/21). Fans without cable can watch the match for free via a trial of fuboTV. Here’s what you need to...
UEFA・11 DAYS AGO
CBS Sports

Paris Saint-Germain will be without Neymar for at least Tuesday's UEFA Champions League clash with RB Leipzig in Group A after the Brazilian superstar returned from international duty with a groin issue. Neymar, 29, has trained since returning to the French capital but pain forced him to cut short training...
UEFA・8 DAYS AGO
The Independent

Paris Saint-Germain welcome RB Leipzig to the Parc des Princes in the Champions League tonight as the French side look to build momentum following the arrival of Lionel Messi. The Argentine scored a spectacular first goal for the club as PSG beat Manchester City 2-0 last time out in the Champions League but Mauricio Pochettino’s side then suffered their first defeat of the Ligue 1 season to Rennes in their last match before the international break. Messi was unavailable as PSG beat Angers 2-1 on Friday night as he had yet to return from international duty but is set to...
UEFA・7 DAYS AGO

RB Leipzig went 2-1 up but Lionel Messi replied in the second half with two quick goals, including a Panenka penalty, and PSG won 3-2
UEFA・7 DAYS AGO
Sporting News

Kylian Mbappe missed an injury-time penalty and denied Lionel Messi a shot at a hat-trick as Paris Saint-Germain scrapped their way to a 3-2 win over RB Leipzig in the Champions League. The Frenchman took over spot-kick duties from his team-mate late on at Parc des Princes, looking to add...
SOCCER・7 DAYS AGO
firstsportz.com

Parc des Princes witnessed a mind-boggling encounter between the home side, PSG and RB Leipzig. The match went down to the wire with both teams giving their all in to ensure a win for their side. However, the competition was intense. The match began on a high note with PSG...
UEFA・7 DAYS AGO
World Soccer Talk

Messi and Mbappe lead PSG to victory against Leipzig

Paris (AFP) – Lionel Messi scored twice and Kylian Mbappe played a starring role but later missed a penalty as Paris Saint-Germain came from behind to beat RB Leipzig 3-2 in the Champions League on Tuesday. Mbappe had given PSG the lead at the Parc des Princes but a Leipzig...
SOCCER・7 DAYS AGO

Give the ball to Kylian Mbappe and Lionel Messi and let them do the rest. PSG's used that strategy to success in a home Champions League match against RB Leipzig, coming from behind to win 3-2. Messi scored twice and Mbappe had a hand in all three goals with one goal, one assist and one drawn penalty.
UEFA・7 DAYS AGO
theedgemarkets.com

Messi finding his feet at PSG thanks to Mbappe

PARIS (Oct 20): Lionel Messi has scored three goals for Paris St Germain, all of them in the Champions League, and he has Kylian Mbappe to thank for the lot. Mbappe, who scored one and created two more for Messi in a 3-2 win over RB Leipzig on Tuesday, had told PSG he wanted to leave the Ligue 1 club during the close season for Real Madrid, a year before his contract expires.
SOCCER・7 DAYS AGO
MassLive.com

Paris Saint-Germain takes on RB Leipzig Tuesday in a pivotal Champions League matchup. PSG comes into the match tops in the group, but sits in a points tie with Club Brugge, winning out thanks to just a single goal in differential. The Ligue 1 juggernauts come in with a star-studded lineup that features Lionel Messi and Kylian Mbappe. However, the French League front runners will be without Brazilian star Neymar in Tuesday’s match. RB Leipzig, meanwhile, will try to bounce back from a brutal start to group play. The Bundesliga club is still looking for its first points in Champions League play this season.
UEFA・6 DAYS AGO
Tribal Football

Ronaldinho says Lionel Messi's move to PSG was a pleasant surprise. Ronaldinho played for Barca with Messi, having originally been signed by PSG. He said, "I'm very happy to see him at the club where I started in Europe. "It's not something I thought I would see! I was sure...
SOCCER・4 DAYS AGO

Paris (AFP) – Lionel Messi will get his first taste of French football’s biggest rivalry when Marseille host Paris Saint-Germain later on Sunday, with the Ligue 1 leaders kicking off six points clear at the top from Lens in second. Lens beat struggling Metz 4-1 earlier to close the gap...
UEFA・2 DAYS AGO
ESPN

Ligue 1 leaders Paris Saint-Germain dropped two points as they were held to a 0-0 stalemate at bitter rivals Marseille after playing more than half an hour with 10 men amid minor crowd trouble on Sunday. The game was briefly paused twice because of incidents involving OM fans after both...
MLS・2 DAYS AGO
Yardbarker

Former France and Barcelona star Thierry Henry believes Lionel Messi has a problem at PSG. Messi is now playing regularly for the French side having missed the early stages of the campaign through injury following his free transfer from Barcelona. But while he has scored three times in his first...
SOCCER・18 HOURS AGO
chatsports.com

Rio Ferdinand admits he 'wouldn't be happy' with Paul Pogba and his recent public outburst had he been his team-mate. The Frenchman spoke candidly in a post-match interview after Manchester United's 4-2 defeat at Leicester City. Speaking to the BBC after their loss at the King Power Stadium - their...
PREMIER LEAGUE・7 DAYS AGO
Daily Mail

Anthony Martial misses out on Leicester trip after Manchester United star picks up injury while away with France, Ole Gunnar Solskjaer confirms

Ole Gunnar Solskjaer has explained that an injury picked up by Anthony Martial while away on international duty has ruled him out of Man United's trip to Leicester. Solskjaer has made five changes from the side that were held 1-1 by Everton before the break, with Cristiano Ronaldo brought back into the line-up having controversially been named on the bench against the Toffees.
PREMIER LEAGUE・10 DAYS AGO
chatsports.com

Rio Ferdinand has blasted Manchester United's lack of 'unity' and pressing ability after a hugely disappointing 4-2 defeat against Leicester on Saturday. The Red Devils were outclassed, outfought and outplayed as Brendan Rodgers' side took a fully deserved three points at the King Power. And iconic former defender Ferdinand declared...
PREMIER LEAGUE・8 DAYS AGO
SkySports

Richarlison: Everton forward returns to training after month out with knee injury

Everton forward Richarlison has returned to full training ahead of their Premier League match against Watford. He had missed over a month of action after picking up a knee injury against Burnley on September 13. Manager Rafa Benitez has been missing both Richarlison and striker Dominic Calvert-Lewin - who has...
PREMIER LEAGUE・5 DAYS AGO