By Luke Gentile
WashingtonExaminer
28 days ago 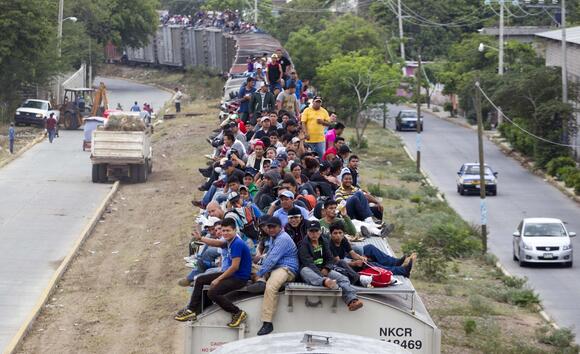 "The months-long surge in illegal crossings has instigated an international humanitarian crisis , spurred a spike in international criminal activity, and opened the floodgates to human traffickers and drug smugglers endangering public health and safety in our states," the letter read.

The crisis has affected every state in the union and can no longer be ignored, the coalition of governors said, demanding a meeting with Biden within 15 days.

THESE MIGRANTS DON'T QUALIFY FOR ASYLUM, BUT BIDEN IS LETTING THEM IN ANYWAY

"Cartels and traffickers are making $14 million a day moving people illegally across the border. More fentanyl has been seized this fiscal year than the last three years combined — almost 10,500 pounds of fentanyl when only 2 milligrams prove fatal," the governors wrote. "This is enough to kill seven times the U.S. population."

The federal government's effort to relieve the disaster has been ineffective, and many individual states have had to step up and pledge their own resources to address the crisis, the letter added.

Only Biden has the ability to "restore security," the governors said, and he must meet his responsibility to enforce the immigration laws passed by Congress , according to the letter.

"We must end the current crisis and return to border operations that respect the laws of our land and the lives of all people, including those in our states looking to the federal government to enforce and protect our nation's borders," it read.

The Republican leaders said they recognized the president's many responsibilities, but argued that protecting the border is chief among them.

"While we know your responsibilities as Commander in Chief are substantial, ending the national crisis and securing our states must be a priority," the letter concluded.

President Joe Biden, eager to revive stalled negotiations on his economic agenda, will meet with warring House Democrats this week in a bid to reach a deal.
WASHINGTON, DC・13 HOURS AGO
WashingtonExaminer

A Republican senator described former President Donald Trump as an election loser who is not guaranteed to win the GOP's presidential nomination in 2024 if he decides to run.
PRESIDENTIAL ELECTION・1 DAY AGO
WashingtonExaminer

Still acclimating to the post-White House political spotlight, former President Barack Obama is back ginning up enthusiasm for President Joe Biden and other Democrats as the incumbent struggles to unite his party and the country behind his sprawling liberal agenda.
PRESIDENTIAL ELECTION・1 DAY AGO
The Guardian

What’s actually in Biden’s Build Back Better bill? And how would it affect you?

In much of the press coverage of the fight over Joe Biden’s Build Back Better bill, politicians, pundits and media talking heads often focus on its $3.5tn price tag. But all the attention to the top-line figure ignores the huge implications of what is actually in the legislation – and how it could transform millions of Americans’ lives.
U.S. POLITICS・23 HOURS AGO

WASHINGTON (AP) — President Joe Biden is entering a crucial two weeks for his ambitious agenda, racing to conclude contentious congressional negotiations ahead of both domestic deadlines and a chance to showcase his administration’s accomplishments on a global stage. Biden and his fellow Democrats are struggling to bridge intraparty divides by month’s end to pass a […]
PRESIDENTIAL ELECTION・21 HOURS AGO
The Independent

It's Washington s enduring question: What does Joe Manchin want?But increasingly the answer is crystal clear. The conservative West Virginia Democrat wants to dismantle President Joe Biden s proposed climate change strategies and social services expansion in ways that are simply unacceptable for most in his party.So the question becomes less about what Manchin wants and more about whether Biden can bring him, the party's other centrist senators and its progressives to middle ground and salvage his once-sweeping $3.5 trillion proposal from collapse. As the White House pushes its Democratic allies on Capitol Hill to wrap...
PRESIDENTIAL ELECTION・10 HOURS AGO
Newsweek

In response, Pima County's administrator noted the results were already "publicly audited via hand count by the County's Republican and Democratic parties."
ARIZONA STATE・2 DAYS AGO

Unable to unite his own party behind the $3.5 trillion "human infrastructure" plan, President Joe Biden is making that pitch directly to Americans.
PRESIDENTIAL ELECTION・17 HOURS AGO
WashingtonExaminer

Federal Communications Commission acting Chairwoman Jessica Rosenworcel is not expected to be nominated by President Joe Biden to serve in the role on a permanent basis, people familiar with the matter said, because she is not liberal enough for the administration.
PRESIDENTIAL ELECTION・1 DAY AGO
The Guardian

President Joe Biden is likely to abandon a clean energy programme that was the centrepiece of his efforts to tackle greenhouse gas emissions at home, US media reported, because of opposition from a swing-vote Democratic senator from a state with a historically large coal industry. Funding to replace coal- and...
ENERGY INDUSTRY・2 DAYS AGO
WKBN

Joe Biden paid tribute Saturday to fallen law enforcement officers and honored those who fought off the Jan. 6 insurrection.
U.S. POLITICS・2 DAYS AGO

The Renew America Movement is urging moderate Republicans to support Democrats as part of a bid to defeat the pro-Trump GOP.
U.S. POLITICS・3 DAYS AGO
FOX59

President Joe Biden says he would prefer to slash the length of the new and expanded programs in his $3.5 trillion social safety net and climate change legislation, rather than eliminate programs entirely. Biden is trying to reassure progressives who are worried their priorities may get cut in the negotiations. Democrats on Capitol Hill are working to reduce the sweeping package down to about $2 trillion in spending, which would be paid for with higher taxes on corporations and the wealthy. The proposal includes everything from free child care and community college to significant provisions meant to combat climate change.
U.S. POLITICS・2 DAYS AGO
POLITICO

'I am offended': DeSantis vows to sue Biden over vaccine mandates

“Let's not have Biden come in and effectively take away ... the jobs of people who have been working hard,” DeSantis said.
HEALTH・4 DAYS AGO
Newsweek

DES MOINES, Iowa – Gov. Kim Reynolds traveled to Mission, Texas on Wednesday to visit the southern border and join eleven other Republican governors urging the Biden Administration to act. The Republican governors, including Reynolds, led by Governors Doug Ducey of Arizona and Greg Abbott of Texas, had sent a...
DES MOINES, IA・11 DAYS AGO
1240 KLYQ

Montana Governor Greg Gianforte appeared on Fox News this week during his visit to the southern border. He was interviewed by Fox News anchor Ainsley Earhardt, who asked him about the conditions that he and other western states governors have witnessed. “This is an unmitigated disaster of Joe Biden’s own...
POLITICS・11 DAYS AGO
Victoria Advocate

Guest column: The crisis on the border demands decisive action

For many Americans, border security is just another policy issue they follow on the news. For Texans like me who live in border towns, it’s a personal issue that affects the communities we call home. As a result, border residents notice when politicians step up to the plate during times of crisis and even more so when they don’t.
IMMIGRATION・11 DAYS AGO