By Alan Dawson
Insider
26 days ago 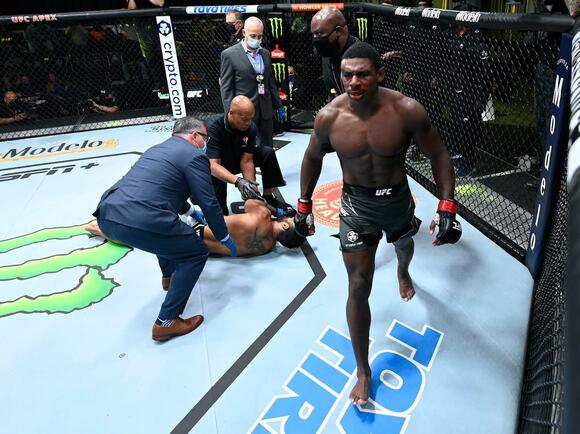 An American fighter renowned for his highlight-reel knockouts came from behind to deliver an uppercut finish at the UFC 's latest show Saturday in the Apex, Las Vegas.

Joaquin Buckley is used to scooping performance of the night bonus checks, and even claimed one of the "most unbelievable" knockouts in UFC history when he flattened Impa Kasanganay with a spinning back kick last year.

Though he entered the Octagon last weekend on a loss - a head kick KO to Alessio di Chirico in Abu Dhabi earlier this year - there remains a burden of expectation to deliver stunning finishes as he has frequently done before .

At the weekend, he did not disappoint.

Buckley needed something big to guarantee a win in his middleweight match against Antonio Arroyo, and midway through the third and final round, he clattered his opponent until he secured that W.

The final blow in Buckley's striking sequence, an uppercut, left Arroyo on the floor for several minutes.

It was a finish which earned the winner yet another performance-related bonus, as the UFC rewarded him with a $50,000 check in addition to his show and win pay.

"That was a beautiful fight between me and Antonio," Buckley said, according to MMA Fighting .

"I was just swinging, I was just throwing. Coach told me to keep bobbing and weaving and we got it done."

If Buckley's ability to score a much-needed stoppage wasn't impressive enough, he managed to produce the knockout despite a grotesque swelling on his head.

See the abnormal injury below:

Over the past year and a half, WWE has elevated the character of Roman Reigns to the maximum. The wrestler, who returned to SummerSlam 2020, became the authentic ruler of the Stanford company and since that time no one has been able to pin him or stop his rise. The...
WWE・14 DAYS AGO
The Spun

Former UFC champion Ronda Rousey can officially add “mother” to her incredible résumé. On Monday night, she announced the birth of her daughter on Instagram. Rousey posted a picture of her daughter’s hand on her social media account. Her post also included her daughter’s name, La’akea Makalapuaokalanipō. Travis Browne, Rousey’s...
COMBAT SPORTS・18 DAYS AGO
firstsportz.com

“Everyone saw you cheat”, “You are a champ” – Miesha Tate hits out at Aspen Ladd; Ladd responds

Aspen Ladd had her fight against Macy Chiasson at UFC Vegas 38 cancelled after failing to make weight. The fight was set to take place in the main card of the event headlined by Thiago Santos vs Johnny Walker. Initially, weighing-in Ladd came in at almost 142 lbs, more than 6 lbs above the limit. She couldn’t make weight with the use of a towel as well.
UFC・13 DAYS AGO
Insider

An unbeaten Cage Warriors champion failed to make weight, but UFC boss Dana White signed him anyway when he lit up Contender Series.
UFC・2 DAYS AGO

Roman Reigns is set to defend his Universal Championship title against Finn Bálor at WWE’s Extreme Rules pay-per-view, and the fight is shaping up to be the champ’s greatest challenge in a while. Bálor has brought back his famous Demon persona, but will that be enough to topple Reigns’ tremendous run? It seems unlikely, and we say that due to a startling statistic that's been making the rounds as of late.
WWE・20 DAYS AGO
MMAmania.com

Former Ultimate Fighting Championship (UFC) light heavyweight champion Jon Jones was arrested and charged with domestic violence back on Sept. 24 in Las Vegas, Nevada, while “Bones” was on location to accept his place in the fight wing portion of the promotion’s Hall of Fame. But what started as a...
LAS VEGAS, NV・18 DAYS AGO
CBS Sports

Deontay Wilder releases statement following TKO loss to Tyson Fury: 'I did my best, but it wasn't good enough'

Deontay Wilder is once again heading back to the drawing board. The former heavyweight champion lost for a second time to Tyson Fury on Saturday night in Las Vegas when the "Gypsy King" stopped him via 11th-round knockout. Wilder (42-2-1, 41 KOs) won the opportunity to challenge Fury for a...
COMBAT SPORTS・6 DAYS AGO
MMAmania.com

Former heavyweight boxing champion Evander Holyfield is making his return to the “sweet science” at some point in 2022, despite a poor showing against ex-UFC slugger Vitor Belfort under the Triller banner earlier this month in Hollywood, Florida. Holyfield, who turns 59 in less than a month, was floored by...
HOLLYWOOD, FL・25 DAYS AGO

The moment that Deontay Wilder refused to show Tyson Fury any respect, after the Gypsy King's knockout victory, has been revealed after new video footage emerged. Wilder and Fury were involved in an absolute slobber knocker on Saturday night, as the pair ended their trilogy with yet another instant classic.
COMBAT SPORTS・2 DAYS AGO
bjpenndotcom

Former UFC light heavyweight champion Jon Jones issued a statement after being kicked out of his gym, Jackson-Wink MMA. On Wednesday, Jones’ longtime striking coach Mike Winkeljohn spoke to The MMA Hour’s Ariel Helwani and revealed that “Bones” had been booted from Team Jackson-Wink after his latest arrest. According to Winkeljohn, it was a difficult decision for him to make, but one that he had to do as he is a father of three and a husband himself. After learning of Jones’ arrest in Las Vegas last month for domestic battery, Winkeljohn had no choice but to tell Jones to stop drinking and to stay away from the gym until he turns his life around.
UFC・3 DAYS AGO
Fox News

Deontay Wilder has been given a six-month medical suspension after being knocked out by heavyweight champion Tyson Fury in their trilogy fight in Las Vegas on Saturday night. Fury defeated Wilder with an 11th-round knockout, coming back from two knockdowns in one of the most entertaining of heavyweight fights. Wilder...
LAS VEGAS, NV・3 DAYS AGO
USA TODAY Sports Media Group

Dana White to Jake Paul: 'Go fight somebody your own size,' stop asking for Jorge Masvidal

UFC president Dana White is not interested in Jake Paul’s recent proposal to fight Jorge Masvidal. With White continuously mocking Paul’s choice of opposition, the YouTube star offered to fight Masvidal, so he can exploit prime UFC fighters’ “lack of boxing ability.” But White thinks Paul should pivot to the likes of former UFC middleweight champion Anderson Silva, who’s competed at light heavyweight, instead of tactically picking on smaller fighters.
UFC・29 DAYS AGO

Eddie Hearn insists Deontay Wilder was “not normal” during his knockout defeat to Tyson Fury.The American was dropped four times on the way to suffering an 11th round stoppage to end the trilogy.And the Matchroom promoter was alarmed by the Alabaman’s exhausted look after just three rounds. “Obviously, Fury caught him with a great shot and went down twice,” Hearn told iFL TV.“The second one was nothing knockdown, but Fury was still all over the place.“Wilder could not stand up, he was exhausted after three rounds, and that’s not normal. Some heavyweights have good tanks.“Fury’s tank is exceptional, but...
COMBAT SPORTS・3 DAYS AGO
USA TODAY Sports Media Group

Conor McGregor shared his thoughts on Nick Diaz’s unsuccessful return to the octagon on Saturday at UFC 266. McGregor (22-5 MMA, 10-4 UFC), like many fight fans, was a keen observer of Diaz’s (26-10 MMA, 7-7 UFC) long awaited comeback fight, which was a rematch against Robbie Lawler at the T-Mobile Arena in Las Vegas.
UFC・20 DAYS AGO
SPORTbible

Oscar De La Hoya has reignited his rivalry with Floyd Mayweather by calling out his fellow boxing legend for a lucrative rematch. The 48-year-old boxing legend was slated to make his sensational return to the squared circle against UFC legend Vitor Belfort in September. However, De La Hoya’s comeback at...
COMBAT SPORTS・22 DAYS AGO
firstsportz.com

Evander Holyfield returned to the boxing ring after more than 10 years. He faced the former UFC title contender Vitor Belfort in a boxing match and was beaten in the very first round of their contest. Holyfield looked slow and weirdly immobile in the contest, he just took punches from...
COMBAT SPORTS・11 DAYS AGO
worldboxingnews.net

Deontay Wilder would have beaten Tyson Fury via knockout in the fourth round of their heavyweight title fight if he’d gone to a neutral corner. That’s the view of British media newspapers who are attributing referee Russell Mora’s ‘long count’ to the official following the rules to the letter. DEONTAY...
COMBAT SPORTS・18 HOURS AGO
thesource.com

Tekashi 6ix9ine hit Las Vegas attempting to catch some UFC action and instead got a drink thrown at him. The rainbow-haired rapper was on hand at T-Mobile Arena for UFC 266 and engaged with another man in the crowd who called him a bitch. Tekashi attempted to move past, but the man threw an item at the rapper and hits him in the back.
UFC・19 DAYS AGO
The Independent

MMA fighter Justin Thornton has died aged 38, several months after he suffered a 19-second knockout in bare-knuckled boxing bout.The fighter was taken to hospital following a heavyweight fight with Dillon Cleckler in Mississippi, in which he was knocked unconscious.Announcing his death, Bare Knuckle Fighting Championship president David Feldman said: “This morning we were very saddened to be notified of the passing of one of our fighters, Justin Thornton, who competed at BKFC-20 on August 20, 2021. “We join the rest of the combat sports community in sending our deepest condolences to his family and loved ones.”No cause of...
COMBAT SPORTS・11 DAYS AGO
wrestlingrumors.net

On the mend. We are less than a week away from WWE Crown Jewel in Saudi Arabia, which is going to be a stacked show. The card is going to be the company’s major event for the month and one of the biggest of the year, as tends to be the case for the shows taking place in the country. The top matches have already been announced, but one wrestler might not be 100%.
WWE・1 DAY AGO