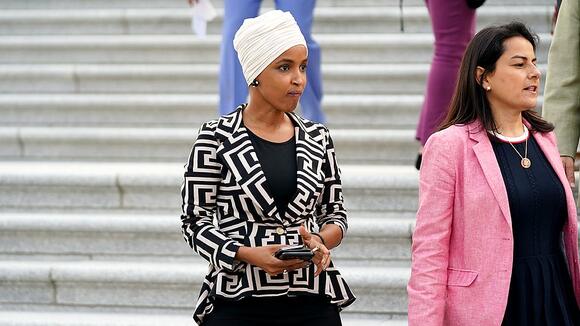 Rep. Ilhan Omar (D-Minn.) is calling on Democratic leaders to disregard a recent ruling by the Senate parliamentarian disallowing prominent immigration reforms — a key element of the Democrats' $3.5 trillion domestic agenda — to be included in the massive package.

Omar, a member of the informal liberal group known as the "squad," suggested Monday that the best way to respond to the ruling is simply to ignore it.

"This ruling by the parliamentarian, is only a recommendation. @SenSchumer and the @WhiteHouse can and should ignore it," Omar tweeted, referring to Senate Majority Leader Charles Schumer (D-N.Y.). "We can’t miss this once in a lifetime opportunity to do the right thing."

Biden, on the campaign trail, had made immigration reform a major priority after a string of previous administrations have promised — and failed — to overhaul an immigration system that all sides maintain is broken.

As part of the $3.5 trillion spending bill currently moving its way through Congress, Democrats are attempting to do just that. Their package includes provisions providing legal status, and the potential for eventual citizenship, for millions of undocumented immigrants brought to the country as children. The legislation would also provide green cards to other groups of immigrants, including farmworkers and those who have been granted Temporary Protected Status due to perilous conditions in their home countries.

Yet MacDonough found that those policy changes flout the Senate's reconciliation rules, which Democrats are using to move the $3.5 trillion package without Republican support.

"The policy changes of this proposal far outweigh the budgetary impact scored to it and it is not appropriate for inclusion in reconciliation," she wrote in the ruling.

Omar was not alone in criticizing the guidance. Schumer said he's "deeply disappointed" in the ruling and vowed to find other ways to get Biden's immigration agenda enacted.

"Senate Democrats have prepared alternate proposals and will be holding additional meetings with the Senate parliamentarian in the coming days," Schumer said in a statement.

It's hardly the first time MacDonough has frustrated Democrats with her rulemaking — nor the first time liberals have pushed back with recommendations to dismiss her.

In February, MacDonough issued guidance preventing Democrats from including a mandatory $15 federal minimum wage in an enormous package providing economic and health care relief from the coronavirus pandemic. The move brought howls from progressives, who wrote to Biden urging him to "refute" the ruling and press ahead with the wage hike.

I urge Omar to send herself back to Somalia before she's charged with committing Immigration fraud by marrying her brother so he could get citizenship. Remove her!

Omar is so emboldened as to think that the check-and-balance process to keep our government in check is just a suggestion that can be put aside when it doesn't fit her agenda.

U.S. Rep. Ilhan Omar told constituents Saturday at a town hall meeting that Minneapolis' rise in gun violence and carjackings can be blamed on police who "have chosen to not fulfill their oath of office and provide the public safety they owe to the citizens." The congresswoman spoke before a...
MINNEAPOLIS, MN・2 DAYS AGO
fox40jackson.com

Schumer, Manchin to meet with Biden in Delaware: report

Sen. Joe Manchin, D-W.Va., will be meeting with both President Biden and Senate Majority Leader Chuck Schumer, D-N.Y., on Sunday, as Democrats continue to have trouble agreeing to terms on a massive social spending bill to go alongside a bipartisan infrastructure bill. The meeting, originally reported by Politico as being...
DELAWARE STATE・2 DAYS AGO
News 12

Immigration advocates stepped up the pressure on Sen. Charles Schumer Friday to provide a pathway to citizenship to undocumented immigrants.
PEEKSKILL, NY・3 DAYS AGO

Republican Leader Kevin McCarthy held a roundtable discussion Thursday as a means to "expose" one of the underreported provisions in the Democrats' multitrillion-dollar reconciliation package: An attempt to grant amnesty to up to 10 million illegal immigrants. About 1.3 million migrants have been taken into custody at the border since...
PRESIDENTIAL ELECTION・4 DAYS AGO
Nevada Current

Policy, politics and progressive commentary Whether millions of immigrants living in the U.S. get a path to citizenship is resting on the decision of one “un-elected official” — the Senate parliamentarian.  At least that’s the criticism shared in a letter signed to Senate Majority Leader Chuck Schumer by Nevada House Representatives Dina Titus and Steven Horsford. The letter urges Vice […] The post Horsford, Titus join calls for Senate to overrule parliamentarian on immigration appeared first on Nevada Current.
LAS VEGAS, NV・4 DAYS AGO
Roll Call Online

Dozens of progressive House Democrats are ramping up calls for immigration relief to be included in a sprawling budget reconciliation package — regardless of what a Senate arbiter says about it. Reps. Lou Correa, D-Calif., Adriano Espaillat, D-N.Y., Jesús “Chuy” García, D-Ill., Alexandria Ocasio-Cortez, D-N.Y., and 39 others called on...
CONGRESS & COURTS・4 DAYS AGO
Boston Globe

Give us a path to citizenship: Chuck Schumer, Nancy Pelosi and President Biden must help immigrants in the reconciliation bill

For more than 20 years, my husband and I have been part of the essential workforce in the United States. I’ve worked as a domestic cleaner and my husband has labored as a construction worker. Together, we have worked to provide for our family and contribute to our community. But we also happen to be undocumented, which means in many respects, we live in the shadows. For decades, we have looked forward to the day when Congress passes an immigration reform bill and puts us on a path to citizenship.
PRESIDENTIAL ELECTION・13 DAYS AGO
spectrumnews1.com

Hundreds of protesters call for Biden to keep immigration promises

MILWAUKEE — Hundreds marched three miles Monday from Milwaukee’s south side to the downtown federal courthouse, chanting messages aimed at President Joe Biden’s lack of action on immigration reform. The protest was part of a statewide strike in Wisconsin, a “Day Without Latinx and Immigrants,” organized by Voces de la...
MILWAUKEE, WI・14 DAYS AGO
NBC News

Sen. Joe Manchin, D-W.Va., is reportedly pushing back on parts of President Biden’s infrastructure bill that would tackle climate change as well as the child tax credit. NBC News’ Cal Perry is in Charleston, West Virginia, to explain how the senator’s constituents are reacting as the infrastructure bill remains in limbo. Oct. 22, 2021.
CHARLESTON, WV・4 DAYS AGO

Here’s something you already know: America has a crisis on its southern border. We can attribute much of it to the giant “help wanted” sign facing Mexico. Decades of hiring undocumented immigrants — even in some cases, recruiting them — to do jobs that Americans wouldn’t do has blown up in our faces. Suddenly, we have too many applicants at our job fair.
IMMIGRATION・3 DAYS AGO
Washington Post

Democrats are scrambling intensely behind-the-scenes to address immigration in the framework they are crafting to expand the nation’s social safety net, according to people with knowledge of the situation, even as President Biden and other party leaders have said little publicly about their strategy in recent weeks. The most pressing...
IMMIGRATION・9 HOURS AGO
Fortune

Senate Majority Leader Chuck Schumer (D-N.Y.) at a press conference in October 2021. There have been incremental moves to cancel student debt since President Joe Biden took office, and his administration has already forgiven about $11 billion in loans for hundreds of thousands of borrowers ranging from defrauded students, Americans with disabilities, and public service workers. That amount is barely a blip on the student loan radar, though. More than 43 million student loan borrowers still owe a mounting $1.7 trillion in debt.
EDUCATION・5 DAYS AGO
POLITICO

Axing either of the two provisions would infuriate progressives and alienate valuable voting blocs. Yet the party might just have to.
CONGRESS & COURTS・21 HOURS AGO
Business Insider

"Why would I tell you that now?" Pelosi told CNN's Jake Tapper while laughing. She went on to say she would discuss it with her family first.
CONGRESS & COURTS・1 DAY AGO
CBS Minnesota

MINNEAPOLIS (WCCO) – President Joe Biden’s big domestic agenda includes proposals for child care programs, universal pre-kindergarten, and an extension of the child tax credit. But it’s still not clear if Democrats have the votes to pass it. On the campaign trail, Joe Biden made a lot of promises. One of the biggest was free community college for all and free pre-kindergarten for every 3 and 4-year-old. But the president has had to scale back his proposals recently. Community college is now out, a casualty of drawn-out negotiations with his own party. Two senators, Joe Manchin of West Virginia and Kyrsten Sinema of Arizona, have...
MINNEAPOLIS, MN・1 DAY AGO
Fox News

House Speaker Nancy Pelosi, D-Calif., on Sunday defended progressives amid party infighting over the bipartisan infrastructure bill and budget reconciliation bill after blowing past several deadlines and quickly approaching another. During an appearance on CNN’s "State of the Union," Pelosi disagreed with host Jake Tapper after he said "moderates are...
CONGRESS & COURTS・1 DAY AGO
TheAtlantaVoice

House Speaker Nancy Pelosi on Sunday suggested that the budget reconciliation process could be one way toward raising the debt ceiling in December. “That’s one path. But we’re still hoping to have bipartisanship,” Pelosi told CNN’s Jake Tapper on “State of the Union.” In September, Pelosi previously said raising the debt ceiling would not be done through reconciliation as part […]
CONGRESS & COURTS・1 DAY AGO