By Emily Brooks
WashingtonExaminer
29 days ago 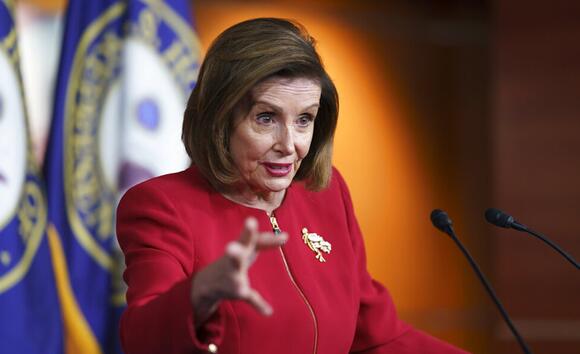 H ouse Speaker Nancy Pelosi pressured her caucus to keep insisting on a bipartisan vote to increase the debt ceiling as some high-ranking Democrats in the House start to entertain raising the limit without Republican support.

Asked on CNN Sunday if he would be fine with Democrats passing a debt ceiling increase with only Democratic support, House Majority Whip Jim Clyburn of South Carolina said: “No, I'm not fine with that.”

"When we take up the debt limit this month, we expect it to be bipartisan once more," Pelosi said. "The debt limit is a shared responsibility, and I urge Congress to come together, in that spirit, on a bipartisan basis as it has in the past to protect the full faith and credit of the United States."

Senate Minority Leader Mitch McConnell has put his foot down on the debt ceiling, saying that if Democrats pursue their go-it-alone $3.5 trillion social programs reconciliation bill, Senate Republicans will not vote to raise the debt limit as part of a continuing resolution or any other bill that requires support from at least 10 Republicans to clear the Senate filibuster.

“If they want to do all of this on a partisan basis, they have the ability and the responsibility to ensure that the federal government not default,” McConnell said.

His stance has peeved Democrats, who note that they voted in favor of raising the debt ceiling while former President Donald Trump was in office despite Republicans passing measures that added to the debt limit that they did not support.

Treasury Secretary Janet Yellen sent a letter to congressional leaders earlier this month saying that the Treasury is set to run out of borrowing authority during the month of October and warning of catastrophic consequences if it does.

“We have learned from past debt limit impasses that waiting until the last minute to suspend or increase the debt limit can cause serious harm to business and consumer confidence, raise short-term borrowing costs for taxpayers, and negatively impact the credit rating of the United States,” Yellen said. “A delay that calls into question the federal government’s ability to meet all its obligations would likely cause irreparable damage to the U.S. economy and global financial markets.”

The federal fiscal year ends on Sept. 30, and the House Rules Committee will soon take up a continuing resolution to continue funding government agencies at current levels until Congress finalizes fiscal year 2023 levels. Democrats could add a debt ceiling increase to that legislation, and if Republicans are united in voting against it, it could trigger a government shutdown if Democrats do not act alone.

Democrats also have the option of bringing the debt ceiling increase as a stand-alone measure or attaching it to another bill.

Republicans, though, could vote in favor of the debt ceiling increase if Democrats abandon their $3.5 trillion reconciliation plan over an inability to get support from all Senate Democrats. Opposition from centrist Democrats such as West Virginia Sen. Joe Manchin, who has floated delaying a vote on the measure until 2022, makes the future of the sweeping proposal unclear.

piglosi wants her park by her house she doesn't care about our country or the people, she should be in prison for her part with milley, she's a nazi, the most hated person

America it is time to remove the democratic party. Their corruption and un-American ways are destroying our country and our freedoms. Stop vote for democrats.

Senate Minority Leader Mitch McConnell said he is hoping Republicans will steer clear of relitigating the bitter 2020 election and will instead focus on the flawed Biden administration in a bid to win in the 2022 midterm elections.
PRESIDENTIAL ELECTION・12 HOURS AGO
WashingtonExaminer

Democrats had hoped it could be an alternative way of curbing emissions in their reconciliation bill. What they're saying: Key moderate senators are resisting efforts to impose a carbon tax as part of their climate action plan, sending progressives back to the drawing board. Sen. Joe Manchin plainly told reporters...
CONGRESS & COURTS・16 HOURS AGO

As Sen. Joe Manchin III seeks to shrink one of our most promising anti-poverty policies — the expanded child tax credit — it’s widely accepted that he just has to do these things to ensure his political survival. After all, in his deep red state of West Virginia, Democrats like him must achieve distance from Washington liberals in any way possible, right?
CONGRESS & COURTS・10 HOURS AGO
Vox

Democrats are terrified of what the future holds for them in the United States Senate. The party currently controls half the seats in the chamber, giving them, with Vice President Harris’s tie-breaking vote, the narrowest possible majority. But some in the party — like pollster David Shor, recently profiled by Ezra Klein in the New York Times — believe demographic trends put Democrats at grave risk of falling into a deep hole over the next two election cycles.
CONGRESS & COURTS・1 DAY AGO
Fox News

New York Times editorial board member Michelle Cottle last week called for Sen. Kyrsten Sinema, D-Ariz., to leave the Democratic Party and become an independent. In a Friday op-ed, Cottle cited the moderate Democrat's split with others in her party on major issues related to President Biden's Build Back Better agenda as a reason she should consider leaving and suggested her departure could wind up "being positive for all involved."
CONGRESS & COURTS・1 DAY AGO
MarketWatch

As the party tries to reach agreement, here are key proposed categories for the spending.
WASHINGTON, DC・18 HOURS AGO

Democrats have found their “anti-Rubio warrior” in Florida’s Senate race, according to Politico. But in Rep. Val Demings, what they have actually found is yet another money furnace that will deliver a disappointing loss when the votes are counted. Politico’s piece details that Demings, the Democratic challenger to Sen. Marco...
FLORIDA STATE・1 DAY AGO
POLITICO

Saule Omarova's nomination has been the target of attacks over her views that the government should play a greater role in the financial system.
CONGRESS & COURTS・14 HOURS AGO
Daily Mail

Two longtime Democratic congressmen announced Monday they will not seek re-election next year, putting the pressure on Speaker Nancy Pelosi to keep control of the House in her party's hands. Pennsylvania Rep. Mike Doyle and North Carolina Congressman David Price will retire. The two men each have more than 20...
CONGRESS & COURTS・1 DAY AGO
WashingtonExaminer

‘Fish or cut bait’: Democrats vie for spending accord by week’s end

The long-stalled Democratic spending package is suddenly on a fast track.
CONGRESS & COURTS・11 HOURS AGO

Washington in recent weeks failed to enact a bipartisan infrastructure bill, and it came up with only short-term fixes to avoid a U.S. default and prevent a partial government shutdown. So Congress and the White House will have to tackle all of those topics again in the weeks ahead, along with other issues.
WASHINGTON STATE・16 HOURS AGO
TheAtlantaVoice

President Joe Biden and Vice President Kamala Harris have been working the phones to try and bolster support for voting legislation teed up for Senate consideration this week, even as the bill is set to run into a Republican blockade. Biden spoke with Democratic Sens. Raphael Warnock of Georgia and Alex Padilla of California on what a White House official […]
PRESIDENTIAL ELECTION・12 HOURS AGO
WashingtonExaminer

Jayapal hails Biden as 'mediator in chief' after spending talks

Rep. Pramila Jayapal voiced high praise of President Joe Biden after she and other progressive Democrats met with him at the White House on Tuesday to discuss the infrastructure bill and reconciliation package.
WASHINGTON, DC・9 HOURS AGO
New York Post

Democratic members of Congress trooped to the White House Tuesday in the latest effort to hammer out an agreement on a multitrillion-dollar social spending bill they are trying to enact without Republican support. Nine members of the far-left House Progressive Caucus emerged from a nearly two-hour meeting with President Biden,...
PRESIDENTIAL ELECTION・7 HOURS AGO

A top House Democrat said Tuesday the party plans to meet a Halloween deadline to advance a massive spending package but hedged on whether they would be successful, telling reporters “it’s very tough” to cut the price tag to meet the demands of centrists.
CONGRESS & COURTS・13 HOURS AGO
WashingtonExaminer

Subscribe today to the Washington Examiner magazine and get Washington Briefing: politics and policy stories that will keep you up to date with what's going on in Washington. SUBSCRIBE NOW: Just $1.00 an issue!
ENERGY INDUSTRY・15 HOURS AGO
AFP

President Joe Biden has pledged to enact the toughest environmental policies in US history but his plans look dead on arrival thanks to one senator who has pocketed a fortune from fossil fuels. The $150 billion Clean Electricity Performance Program (CEPP) -- a cornerstone of Biden's sweeping domestic agenda -- would reward utilities that switch to renewable energy and penalize those that do not. Experts say the program would cut most greenhouse gas pollution tied to electricity generation, which accounts for roughly a quarter of US emissions. But Joe Manchin, a conservative Democrat from coal-rich West Virginia who heads the Senate's energy committee, argues that throwing cash at companies already moving away from fossil fuels is wasteful.
CONGRESS & COURTS・10 HOURS AGO
AFP

President Joe Biden was "more confident" about saving his multi-trillion-dollar agenda in Congress from internal party wrangling, the White House press secretary said late Tuesday, after a day of intensive negotiations with Democrats. Democrats do agree broadly on making use of their rare, if vulnerable, control of both houses of Congress and the presidency to pass major legislation while they can.
U.S. POLITICS・7 HOURS AGO