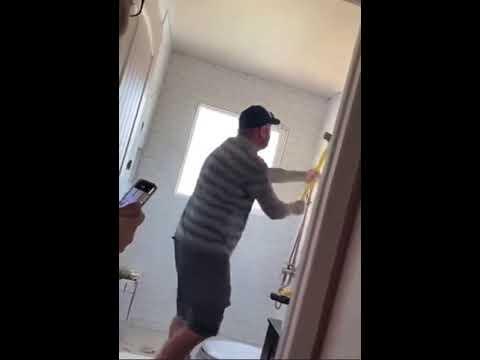 Being a contractor is a tough job.

When you’re in the process of remodeling a house, you’re spending a ton of time and money to get the job done, usually doing everything you can to make the homeowner happy.

And when you’re finished, you just want to get paid for your work, and move on to the next.

However, if a customer is dissatisfied with the job that was done, you might just have to respect that and fix what needs to be fixed.

A Colorado woman ran into a similar situation with a contractor who remodeled her bathroom.

And needless to say, the contractor took it to the next level.

According to KKTV 11 News , Amber Trucke, a resident of Colorado Springs (I feel like we’ve gone here a lot lately), hired Dream Home Remodels to work on her bathroom, as well as replace an exterior door, 2 ceiling fans and some other minor work.

Trucke stated that she had invoices saying that she had paid over $3,000 of the $7,500 bill. Only problem, she didn’t want to pay the rest of it until she could “make sure she was happy with the work.”

When the bill wasn’t paid in full when the job was done, the contractor decided to take matters in his own hands and “repossess” the work they put into it…

By barging his way into the house with a sledgehammer, and destroying all of the work he and his crew had done.

In the video, you hear the contractor say:

“We put weeks into this, thousands of dollars into this.

Let me tell you something. No contractor in the state of Colorado will fix that when they found out that I took it back because she refused to pay me. No one.”

The man absolutely wrecked the bathroom, leaving it worse than when he began the job.

“I haven’t actually cried about this yet. I think it just hit me… I don’t have the words for what happened in this room. For the $3,300 I’ve already paid, I now have nothing.

I was not going to pay them until I saw the actual finished product, and the showerheads had just been put on and the adhesive had to cure for 24 hours. So I wanted to make sure the plumbing worked.

They moved my plumbing around. They move the drain. So I wanted to make sure that worked.”

The company released this statement:

“After several weeks of Communication broke down and resulted in our company repossessing a tile shower. It has never happened before and is not something that is made regular practice.”

Police are investigating if what the contractor did was a criminal or civil matter.

Ok, let’s try and figure this out…

So my only question… how long does it take to make sure you’re “happy with the work”?

Can’t you just walk in the bathroom, take a look around, and write a check? She says it was the drain and plumbing… turn on the water?

If this is the first time this company has ever done this, I’m going to assume they asked her more than once for payment before resorting to actions like this. So how long did she hold out… a few days? A few weeks? She never says she was unhappy with the work…

Granted, that doesn’t give him license to go into her house and bust up the bathroom, but something seems off here. Seems like they were getting stiffed, she didn’t have the money, she stopped responding to phone calls… contractors rely heavily on reputation to keep business booming so in my mind, something fishy is going on here.

You be the judge…

EVERGREEN, Colo. — A Colorado man discovered a curious visitor on his doorstep when he viewed his doorbell camera footage on Oct. 3. Todd Mitchem said a bear was nosing around the front porch of his Evergreen home at about 3:16 a.m. MDT, KDVR reported. “So. … errr ... I...
COLORADO STATE・8 DAYS AGO
Newsweek

The Colorado homeowner had her newly remodeled bathroom destroyed by contractors over a pay dispute and the video was seen around the world.
HOME & GARDEN・9 DAYS AGO
101 WIXX

Does your cat have any weird hiding spots? A woman on TikTok had been renovating her house, and removed all the drywall and tile in her bathroom. So her cat decided to go exploring inside the walls. But then she forgot to tell the guys who installed her new tile the other day. So after they finished up, she started hearing a faint MEOW . . . and realized the cat was inside her walls with no way out. She ended up cutting out a square of drywall next to her tub. But because cats are jerks, it still refused to come out. LOL Eventually it did.
ANIMALS・13 DAYS AGO
KRDO News Channel 13

COLORADO SPRINGS, Colo. (KRDO)-- After a Colorado Springs contractor destroyed his work because of a payment dispute, the homeowner can now expect a happy ending. In September, Amber Trucke shared a now-viral video of contractors from Dream Home Remodels of Colorado taking a sledgehammer to her bathroom. Trucke told her contractors from Dream Home Remodel of The post Group of men rebuild bathroom for Colorado Springs homeowner after viral video appeared first on KRDO.
COLORADO STATE・11 DAYS AGO

A Colorado woman who was attacked in her home by a hammer-wielding man in 1984 has found a sense of closure after the man believed to have been responsible was sentenced to three life terms for a separate attack around the same time.
COLORADO STATE・14 DAYS AGO
99.9 KEKB

One of the worst things that could happen to any pet owner is losing your pet. For one Colorado pet owner, the unimaginable circumstance became her reality; Kenyetta Tyler's dog, Coco went missing 7 months ago after getting lost on a walk during a snowstorm. Tyler, who had been living...
GRAND JUNCTION, CO・12 DAYS AGO
ABC 15 News

What You Need To Consider For Sacramento Bathroom Remodeling

Originally Posted On: https://www.gvdrenovationsinc.com/blog/what-you-need-to-consider-for-sacramento-bathroom-remodeling/. Did you know that a bathroom remodel can give resale returns of up to 67 percent to your home? Your bathroom should reflect your style and tastes. A remodeling project can help you achieve the comfort and tranquility you need in a bathroom. A poorly designed...
INTERIOR DESIGN・12 DAYS AGO

About a year after she was hired to work inside Juneau’s Costco in 2016, Terry Baker was told she could not use the bathroom except during her regular shift’s two scheduled breaks. That’s despite producing evidence she had a medical condition that could require a trip to the bathroom more...
11 DAYS AGO
KRDO News Channel 13

Colorado woman, teen die after two vehicles collide on I-70

A teen girl and a woman from Colorado died after their vehicles collided on Interstate 70 in western Kansas early Saturday and several other people were hurt.
COLORADO STATE・16 HOURS AGO
Insider

The viral video was uploaded to TikTok, where it gained more than 9 million views and sparked conversations in the comments.
PETS・6 DAYS AGO

One dead after plane crashes into rugged Colorado terrain

The pilot of a plane that crashed in rugged terrain outside of Grand Junction, Colorado is deceased, according to a report from the Mesa County Sheriff's Office. On Monday, October 11, a plane lost communication and radar contact with Denver Aircraft Traffic Control after taking off from Blake Field in Delta, Colorado, headed toward Rock Springs, Wyoming. This prompted a search for the potentially downed plane.
COLORADO STATE・6 DAYS AGO
KKTV

COLORADO SPRINGS, Colo. (KKTV) - A suspected drunk driver caused an eight-vehicle pileup after slamming their pickup into a vehicle at a stoplight Saturday evening. Police say the driver hit the car at the intersection of South Academy and Airport Road, triggering a domino-effect crash as one vehicle after another collided. Despite the number of people involved, only two suffered injuries severe enough to require treatment at a hospital. Police say both are expected to recover.
COLORADO SPRINGS, CO・1 DAY AGO
KKTV

‘It’s all repulsive’: Colorado woman’s sense of smell distorted after having COVID-19

COLORADO SPRINGS, Colo. (KKTV) - Imagine flavors in foods you love get replaced with an unbearable taste and smell. It’s a lesser-known side effect from COVID-19 that doctors are seeing in some patients. And it’s the reality for one Colorado Springs woman. In July of 2020, Savanah Hunter was diagnosed...
COLORADO STATE・6 HOURS AGO
probuilder.com

Members of the Colorado Contractors Association (CCA) are pro-vaccine, but Executive Director Tony Milo contends that Denver’s mandate is too restrictive compared with President Joe Biden’s executive order that companies with 100 or more employees have their workers get vaccinated or submit to regular testing. The CCA and six other...
COLORADO STATE・13 DAYS AGO
outtherecolorado.com

The Birdseye fire burning just north of Peyton is 90 percent contained, the El Paso County Sheriff's Office said Saturday afternoon. "If not for the fast response we received from our partners & 200+ people, this fire would have been much more massive, much more destructive," a sheriff's office official tweeted. "The collaboration of all was invaluable in fighting this fire."
COLORADO STATE・8 DAYS AGO
Narcity

A public washroom in Burlington was destroyed, and Mayor Marianne Meed Ward thinks TikTok may have something to do with it. A recent TikTok trend where students destroy bathrooms and school property and cause general mischief, dubbed "devious licks," has gained popularity on the social media platform with many videos showcasing children performing their "devious licks."
BEHIND VIRAL VIDEOS・11 DAYS AGO
People

Authorities said "the ground was moving when they finally got into the house," one neighbor recalled. One Arizona neighborhood has been besieged by rats after a woman was found dead in her home earlier this month. On Sept. 23, Megam Lorts said she called the police after noticing a strong...
ARIZONA STATE・19 DAYS AGO
blavity.com

Woman Identifies Herself As Brittany Renee Williams, 7-Year-Old Who Went Missing 20 Years Ago

A woman identifying herself as Brittany Renee Williams, the 7-year-old girl who went missing in Virginia 21 years ago, has come forward saying she has the DNA proof to confirm her identity. Now located in Fort Wayne, Indiana, she goes by the name Kaylynn Stevenson, NBC 12 reports. Prior to...
PUBLIC SAFETY・11 DAYS AGO