Putin thanks Russians for their 'trust' after United Russia election win

By Reuters
Reuters
29 days ago 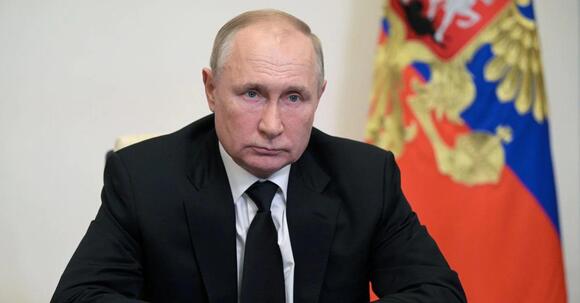 MOSCOW, Sept 20 (Reuters) - Russian President Vladimir Putin on Monday thanked Russians for their trust after the ruling United Russia party that supports him won an emphatic parliamentary majority in an election that opponents said was marred by large-scale fraud. read more

"Special words of thanks, of course, I want to address to the citizens of Russia, to thank you for your trust, dear friends," Putin said on state television.

Has Russia overtaken the United States in high-tech weapons systems? Putin thinks so.

At a plenary session of Russian Energy Week, President Vladimir Putin said that Russia had overtaken the United States in high-tech weapons systems. "The United States is only developing hypersonic missiles with a speed of slightly more than Mach 3. And our systems are flying at speeds in excess of Mach 20. It's not just a hypersonic missile; it's an intercontinental missile. And they are on combat duty already in Russia," Interfax quoted Putin as saying.
20 HOURS AGO
Business Insider

Tensions between Russia and NATO have been escalating for years, particularly since Putin's unilateral annexation of Crimea.
MILITARY・21 HOURS AGO
Newsweek

President Alexander Lukashenko claimed victory for a sixth presidential term, but the election was marred by claims of widespread voter fraud.
POLITICS・21 HOURS AGO
UPI News

Oct. 18 (UPI) -- The Russian government said Monday that it's closing its military liaison mission to NATO and recalled staffers to Moscow, in retaliation to the alliance expelling several Russians last week and accusing them of espionage. Russian foreign minister Sergey Lavrov made the announcement during a news conference...
MILITARY・21 HOURS AGO

Top officials from the Baltic states told Newsweek that Moscow and Minsk are weaponizing vulnerable migrants.
IMMIGRATION・2 HOURS AGO
realcleardefense.com

NATO Has a Problem: Belarus Is Being Reabsorbed Into Russia

On October 7, Polish border troops reported being fired upon by their counterparts from Belarus. Though no one was hurt and the Belarusian soldiers were most likely firing blank ammunition, the incident is illustrative of the tension that has been building in that area since Moscow effectively assumed control over the government in Minsk to prop up Belarus’ authoritarian president, Aleksandr Lukashenko.
MILITARY・1 DAY AGO
Reuters

WASHINGTON (Reuters) -The United States will not join international talks on Afghanistan organized by Russia this week due to logistical reasons, but is open to participating in the future, the State Department said on Monday. Moscow is hosting talks on Wednesday with officials from the Taliban, China and Pakistan, Russian...
FOREIGN POLICY・18 HOURS AGO
Newsweek

NATO accused the Russian officials of secretly working as intelligence officers, and denied them access to the alliance's headquarters in Brussels, Belgium.
POLITICS・22 HOURS AGO

Team Spirit became the first CIS Dota 2 team to win The International since Natus Vincere at the original TI in 2011, completing a Cinderella run at TI10 with a win against tournament favorites PSG.LGD yesterday. When Spirit lifted the Aegis of Champions, it ended a decade-long drought for Eastern...
WORLD・16 HOURS AGO
Reuters

DUSHANBE, Oct 18 (Reuters) - A Russia-led post-Soviet security bloc started its largest military drills near the Tajik-Afghan border in years on Monday amid cross-border tensions ahead of talks between Afghanistan's new Taliban leaders and major regional powers. Unlike Afghanistan's other northern neighbours who have de facto acknowledged the Taliban...
MILITARY・1 DAY AGO
IBTimes

Russia announced on Monday that it will suspend its permanent mission to NATO and its Moscow liaison office in response to last week’s expulsion of eight Russian diplomats. Russia’s Foreign Minister Sergei Lavrov said NATO’s delegation in Moscow will have their accreditation revoked as of Nov. 1 and from that point on, they should interact with the Russian embassy in Brussels if needed.
POLITICS・21 HOURS AGO
PC Gamer

Moscow-based Team Spirit claimed the crown at The International 2021 this weekend, earning a prize payout of more than $18 million in the process—the biggest in esports history. The team also got an official letter of congratulations from Russian president Vladimir Putin. "Congratulations on your well-deserved victory at The International-2021—the...
VIDEO GAMES・18 HOURS AGO

MOSCOW (Reuters) -Russia said on Monday it would halt the activities of its diplomatic mission to NATO after the Western military alliance expelled eight Russians saying they were spies. Foreign Minister Sergei Lavrov also said staff at NATO’s military mission in Moscow would be stripped of their accreditation from Nov....
MILITARY・1 DAY AGO
Reuters

MOSCOW, Oct 19 (Reuters) - Russian President Vladimir Putin will not attend the G20 summit in Rome in person this month due to concernsabout the COVID-19 pandemic, but will take part in it via video link, the Kremlin said on Tuesday. The Kremlin said Putin informed Italian Prime Minister Mario...
POLITICS・2 HOURS AGO
Reuters

KYIV (Reuters) -Ukraine’s parliament on Tuesday passed legislation to strengthen the independence of the Western-backed national anti-corruption bureau (NABU), a requirement for Kyiv to secure more loans from the International Monetary Fund under a $5 billion loan deal. The bill, which sets up a new mechanism for how NABU’s leadership...
POLITICS・1 HOUR AGO
Reuters

MOSCOW, Oct 19 (Reuters) - Russia’s representative to the European Union urged the German authorities on Tuesday to certify the Nord Stream 2 gas pipeline ahead of the Feb. 8 deadline, the RIA news agency reported on Tuesday. RIA quoted representative Vladimir Chizhov as saying that such a move would...
ECONOMY・26 MINUTES AGO
The Independent

Russia’s foreign minister said Monday that the country is suspending its mission to NATO.Foreign Minister Sergey Lavrov said that the move is in response to last week’s expulsion by NATO of eight members of Russia’s mission to the military alliance. NATO said that they were secretly working as intelligence officers and halved the size of Moscow’s team able to work at its headquarters. Lavrov also announced that NATO’s military liaison and information offices in Moscow would be closed.
MILITARY・1 DAY AGO
AFP

US Defense Secretary Lloyd Austin headed to the Black Sea region Sunday aiming to shore up alliances with countries pressured by Russia and show gratitude for their contributions to the two-decade war in Afghanistan. Austin will visit Georgia, Romania and Ukraine before taking part in the in-person defense ministers summit at NATO in Brussels on October 21-22. "We are reassuring and reinforcing the sovereignty of countries that are on the front lines of Russian aggression," a senior US defense official told reporters ahead of the trip. All three countries are in the NATO orbit -- Romania a full member and Georgia and Ukraine partner states.
U.S. POLITICS・2 DAYS AGO
The Independent

Russia accused the US Navy of attempting to enter its territorial waters during joint military drills with China in the Sea of Japan before it was “turned back”.The Russian Defence Ministry released video footage it says showed the USS Chafee up close with anti-submarine vessel Admiral Tributs, which radioed a warning to the US destroyer that it was “in an area closed to navigation due to exercises with artillery fire,” according to the Interfax news agency, reported by Reuters.The Russian defence ministry summoned the US military attache over the “unprofessional actions” of the USS Chafee, the RIA news agency...
MILITARY・3 DAYS AGO
hngn.com

Vladimir Putin tells an attractive US interviewer that she's not listening enough to vital points during an onstage interview in Moscow. The pretty female anchor asked many questions like whether gas supplies were weaponized, but she did not pay close attention to his answers. Putin explains gas and the EU...
POLITICS・4 DAYS AGO