By Paul Bedard
WashingtonExaminer
27 days ago 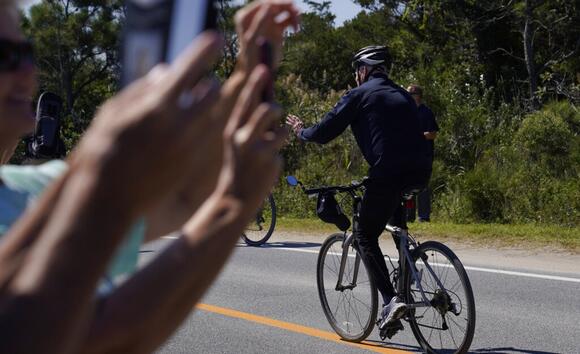 There was a chance that President Joe Biden would end a streak dating back to Bill Clinton of new presidents losing control of Congress in their first two years.

But his crummy polling after a long honeymoon now suggests that he will lose as many House seats as former President Donald Trump in 2018 and for the same reason: Voters don’t like what he’s doing on key issues.

It’s well known that Biden’s approval ratings have been tanking, especially since the bungled withdrawal of troops and diplomats from Afghanistan. But what Bolger has found is that the GOP has made “significant inroads” with all groups except younger voters, but these voters have a poor record of turning out on Election Day.

Notably, he said the generic congressional ballot is tied for the first time since 2015.

“Joe Biden’s overall disapproval rating and, more challenging for him, his strong disapproval ratings are right where Donald Trump’s were just prior to the November 2018 midterm elections, when the party in power lost the House and numerous gubernatorial seats,” he said. “I would hate to be in charge of candidate recruitment for Democrats because no Democrat in their right mind and a competitive seat would want to run in this political environment.”

GOP pollsters John McLaughlin and Jim McLaughlin said, “In terms of what to expect for the 2022 midterms, our polling of likely voters suggests that Republicans lead the Democrats in the generic vote for Congress 47%-46% with 7% undecided. This means likely voters are more willing to support a generic group of Republicans rather than a generic group of Democratic candidates for Congress.”

Meanwhile, as Democrats become deflated over Biden, Republicans are psyching up for a battle that is in part led by Trump. Pollster Scott Rasmussen said his numbers show that Trump voters are especially enthusiastic. He said 75% is “very motivated.”

Democrats still hold out hope of a turnaround in Biden’s support, and Jonathan Zogby, of Zogby Analytics, said voters might change their tune if the president’s big-spending social welfare and infrastructure bills deliver projects back home.

“The big problem Republicans face is can Biden and the Democrats get their monstrous infrastructure bill passed, which for them can buy enough time to provide more stimulus and pork to keep the economic balloon inflated. That would give Democrats the edge to retain majorities,” Zogby said.

“If for some reason they cannot pass a big infrastructure bill, Republicans can focus on a not-so-great economy and Biden's vaccine mandates, which threaten freedoms and hurt small businesses,” he added.

Then, of course, there is the 50-50 Senate, and if Biden’s polling trend continues, it should also turn Republican, creating a unified GOP hurdle to the president’s agenda.

“Overall, it's close, and I see Republicans with more of an advantage right now to win both chambers — but not by huge amounts,” Zogby said.

Biden is way worse then Trump ever was, they were just tweets, you know what they say, sticks and drones may break your bones but words will never hurt you, Biden just left our people in Afghanistan and just blew up a bunch of kids and service workers worse than any tweet Trump could’ve ever did

fantastiy land,13 american soldiers dead because of biden administration,go talk to the parents, joe biden was awful to the parents,but again unintelligent, facts higher taxes,food,gas abandoned Americans which Trump would have never done, southern border out of control, fentanyl triples at the border, and also Biden can't talk without a list,and not one american soldiers die 18 months went Trump was President,the country is in total mess,and some Democrats would not vote for him again,they said they didn't know how bad biden was, they would vote for President Donald J Trump in 2024, so check your facts!!!

President Joe Biden’s crashing polling numbers appear to have no end as he fumbles with the border crisis, a 13-year high in inflation, and the threat of empty toy shelves on Christmas Eve.
PRESIDENTIAL ELECTION・3 DAYS AGO
Fox News

Judge Jeanine Pirro questioned who was really in charge of the White House Saturday on "Justice with Judge Jeanine." JUDGE JEANINE: In case you didn’t know it, Joe Biden is the president of the United States in name only. Someone else is running the White House. Barack Obama, maybe? Come along with me and see if what I say makes sense. Now, from the beginning of his campaign, we knew he wasn’t right. We kept asking ourselves what was wrong with him. He was clearly confused, saying crazy things.
U.S. POLITICS・16 HOURS AGO
Newsweek

Nearly Quarter of Republicans Still Think Trump 'Likely' to Be Reinstated in 2021: Poll

Even though the U.S. Constitution doesn't provide a mechanism for the "reinstatement" of a president, 22 percent of Republican voters still think Trump's likely to be reinstated before the year ends.
PRESIDENTIAL ELECTION・22 HOURS AGO
WashingtonExaminer

"That's not necessarily something we want to do up front…but if he has pieces of information we need, we certainly will," said the Illinois lawmaker.
CONGRESS & COURTS・4 HOURS AGO
Lootpress

America is losing its patience with the Biden Administration

In his speech on September 9, 2021, President Joe Biden chastised unvaccinated Americans, contemptuously labeled them a “distinct minority” and stated that “We’ve been patient, but our patience is wearing thin.” However, the President’s plummeting poll numbers seem to reflect that it is actually the American people who are losing patience with his incompetent and untrustworthy administration.
PRESIDENTIAL ELECTION・7 HOURS AGO
WashingtonExaminer

Biden in 2020: 'We don't have a food shortage problem, we have a leadership problem’

Another day, another Biden lie exposed from when he was campaigning for president.
PRESIDENTIAL ELECTION・1 DAY AGO
The Independent

Donald Trump has become the favourite to win the election in 2024, as Joe Biden falls behind the former US president and faces challenges with his domestic agenda. Mr Trump, according to betting odds, had been ahead in the race for the Republican nomination in 2024 but had not been on odds for a win in the election.However, recent odds byBetfair Exchange found Mr Trump is now 4.8 to win in 2024. Mr Biden, meanwhile, was at 5.1 after falling behind his own vice president, Kamala Harris, in the presidential tie-up. Although neither Mr Trump nor Mr Biden have...
PRESIDENTIAL ELECTION・2 DAYS AGO

Still acclimating to the post-White House political spotlight, former President Barack Obama is back ginning up enthusiasm for President Joe Biden and other Democrats as the incumbent struggles to unite his party and the country behind his sprawling liberal agenda.
PRESIDENTIAL ELECTION・9 HOURS AGO
Newsweek

The California congressman has called the former president a "clear and present danger" to democracy.
POTUS・1 DAY AGO
WITF

(Washington) — If the Republicans take the House back in the 2022 midterm elections, they get to pick a speaker, and there’s no requirement that the speaker has to be an elected representative. “Can you just imagine Nancy Pelosi having to hand that gavel to Donald J. Trump?” mused Rep....
U.S. POLITICS・1 DAY AGO
Newsweek

The former president has now lost the popular vote in two consecutive elections and could struggle to win in 2024.
PRESIDENTIAL ELECTION・1 DAY AGO

Federal Communications Commission acting Chairwoman Jessica Rosenworcel is not expected to be nominated by President Joe Biden to serve in the role on a permanent basis, people familiar with the matter said, because she is not liberal enough for the administration.
PRESIDENTIAL ELECTION・9 HOURS AGO
Newsweek

Donald Trump Jokes Hunter Biden Inspired Him to Paint, Could Get Over $2M Per Canvas

The former president had a dig at Biden's artwork which will be on display in New York.
NEW YORK CITY, NY・1 DAY AGO
The Free Press - TFP

Poll: Biden’s Presidency “Sinking Like The Titanic”, Trump May Be Beneficiary

One snafu after another has driven President Joe Biden’s job-approval rating into the cellar. And Donald Trump may be the primary beneficiary. Zogby Analytics released a survey on Thursday that found just 36 percent of respondents approve of Biden’s work during the first nine months of his term. On the...
PRESIDENTIAL ELECTION・7 HOURS AGO
New York Post

“I like kids better than people,” President Biden said Friday after getting a hug from a toddler in Connecticut while nearby protesters bellowed, “F–k Joe Biden.”. “When I talked to all your folks out on the playground, I joked that everybody knows I like kids better than people. Fortunately they like me. That’s why maybe I like them,” Biden said during a speech in Hartford.
PRESIDENTIAL ELECTION・2 DAYS AGO
Washington Post

It’s the 1970s all over again, and Joe Biden is the new Jimmy Carter

Want proof that the Biden administration is really the second incarnation of the Carter administration? We have runaway inflation, Americans trapped overseas, a member of the first family who tried to do business with Libya and a president begging the Organization of the Petroleum Exporting Countries and allies (OPEC Plus) to increase oil production. It’s like the 1970s all over again.
PRESIDENTIAL ELECTION・3 DAYS AGO
Fox News

White House chiefs of staff should never use emojis. Using two of them, President Joe Biden’s Chief of Staff, Ron Klain, stepped on a landmine when he endorsed a Harvard economist’s tweet which suggested the rising cost of goods across the country is a "high class problem." An incredibly tone-deaf...
PRESIDENTIAL ELECTION・2 DAYS AGO
uticaphoenix.net

George Clooney attributed President Joe Biden’s falling poll numbers to how former President Donald Trump left the country after his time in office. Clooney supported Biden’s campaign in the 2020 presidential election and said the nation needs to recover from a Trump presidency. “It’s like taking a battered child and...
PRESIDENTIAL ELECTION・2 DAYS AGO