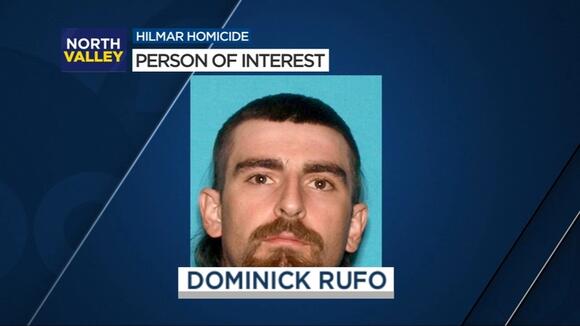 MERCED COUNTY, Calif. (KFSN) -- A popular bar in the small close-knit community of Hilmar is now the focus of a homicide investigation.

"Everybody knows everybody in Hilmar and so for this to happen, I think it's a big shock to Hilmar itself," says Merced County Sheriff Deputy Daryl Allen.

Merced County Sheriff's deputies responded to the Diner after getting reports of a shooting around 7 pm.

Authorities say there was an argument between Gray and the person of interest -- 29-year-old Dominick Jeffery Rufo.

Deputy Allen says this was an isolated incident.

Authorities have talked to several witnesses and are still looking for more information.

The workers at Hot Rod Diner are all okay, but still reeling from the shooting.

"The bartender that was on duty, she's well aware of precautions and other things that have happened," says Lauren Seward. "Nothing that serious, but she knew exactly what to do and she made sure all the customers were safe."

Seward sends her condolences to the victim's family.

She says she wants to reassure the community that they are open for business and there's no need to be afraid.

"It's been very slow today (Monday)," she said. "We had a lot of phone calls and people concerned. It's a small community. We have tons of people that come in daily and the regulars have not come in today. I just want everyone to know it's safe here. We are open, we have taken all precautions, there is nothing to be concerned about and we look forward to seeing everyone in the future."

A Fresno police officer is accused of choking a 14-year-old Black girl, re-igniting conversations about race and use of force.
FRESNO, CA・6 HOURS AGO
ABC30 Central Valley

Sabas Ruiz Galviz, one of the two people hospitalized after a man allegedly drove his van into a taco truck in east central Fresno, has died.
FRESNO, CA・2 HOURS AGO
ABC30 Central Valley

An investigation is underway after officers say a man died in a crash in Fresno County Tuesday night.
FRESNO COUNTY, CA・2 HOURS AGO
ABC30 Central Valley

Tulare County deputies have arrested a 13-year-old who was reportedly threatening to shoot up a school.
TULARE COUNTY, CA・6 HOURS AGO

Yosemite Lakes Park arsonist Kenneth Jackson out on parole, prohibited from being in Madera County

Tulare Walmart given all-clear after evacuation due to 'suspicious call'

A Walmart location in the South Valley has been given the all clear after being forced to evacuate due to a "suspicious call."
TULARE, CA・1 DAY AGO
ABC30 Central Valley

It's been a year since the morning when 82-year-old Merced Sanchez was killed outside his Raisin City home. His family members are still waiting for answers.
FRESNO COUNTY, CA・6 HOURS AGO

A driver was killed in a two-vehicle crash in Merced County on Saturday night.
MERCED COUNTY, CA・2 DAYS AGO
ABC30 Central Valley

Witnesses told police the motorcyclist was speeding westbound on Shaw Avenue, ran a red light on Cedar Avenue, and hit the back of a trailer being pulled by a van traveling northbound on Cedar turning west onto Shaw.
FRESNO, CA・2 DAYS AGO
ABC30 Central Valley

Bicyclist killed after being hit by truck in Merced County

Parts of Highway 140 are closed in Merced County after a truck hit and killed a bicylist on Sunday morning.
MERCED COUNTY, CA・2 DAYS AGO

A late-night fire tore through an under-construction apartment building in Visalia, turning the structure into ash and debris.
VISALIA, CA・2 DAYS AGO
ABC30 Central Valley

A manhunt is underway after Merced police made a major weapons bust on Saturday afternoon.
MERCED, CA・3 DAYS AGO
ABC30 Central Valley

After receiving several tips, investigators ask for the public's help to identify the owner or anyone associated with two vehicles.
VISALIA, CA・4 DAYS AGO
ABC30 Central Valley

An argument at a southwest Fresno recycling center becomes deadly. Police are looking for the suspects who assaulted a 65-year-old man who later died.
FRESNO, CA・4 DAYS AGO
ABC30 Central Valley

2 accused of kidnapping, shooting at suspect's ex-girlfriend in Merced County

The woman was able to escape from the couple, but as she ran away, they chased her. At one point, someone started firing shots at her.
MERCED COUNTY, CA・4 DAYS AGO
ABC30 Central Valley

New details have been released about the armed man who showed up at a school campus in downtown Fresno on Friday.
FRESNO, CA・4 DAYS AGO
ABC30 Central Valley

An investigation is underway after Tulare County deputies say they found a man dead in an orchard Friday afternoon.
TULARE COUNTY, CA・4 DAYS AGO