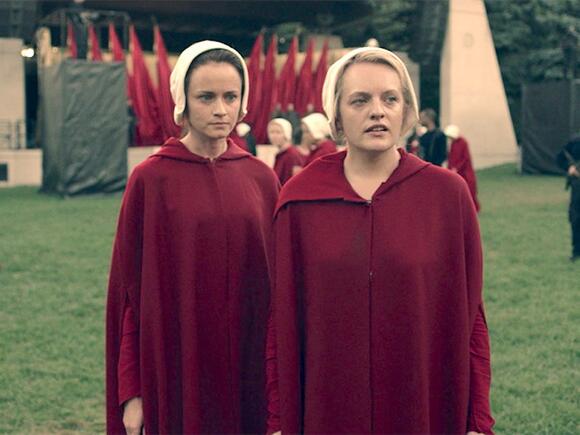 "The Handmaid's Tale" set a new record on Sunday for most Emmy losses in a single year.

The series, based on the best-selling novel by Margaret Atwood about a totalitarian society where women are property of the state, was nominated for 21 Emmys this year. Since the series started in 2017, "The Handmaid's Tale" has won an Emmy award each year, receiving a total of 15 Primetime Emmys.

However, with "The Crown" dominating most of the awards, the Hulu series' streak was broken and the series received no wins. It beat the previous record held by "Mad Men," which was nominated for 17 awards in 2021 but won none of them. "Northern Exposure" and "The Larry Sanders Show" also previously held the record, coming up with zero awards after being nominated for 16 in 1993 and 1997 respectfully.

"The Handmaid's Tale" has been renewed for a fifth season.

With so many new dramatic series, Hulu’s “The Handmaid’s Tale: Season 4” somehow got put on a back-burner, begging to be binge-watched. That’s perhaps understandable since Bruce Miller’s loose cinematic adaptation of Margaret Atwood’s 1985 dystopian novel made its debut in April 2017 — perfect timing as the misogynistic religiosity of (fictional) Gilead matched the authoritarian conservatism of Donald Trump’s all-too-real assumption of the U.S. presidency.
TV & VIDEOS・8 DAYS AGO
Newsweek

If you do not recognize Yvonne Strahovski from her two-time Emmy nominated role as Serena Waterford in The Handmaid’s Tale cast, you might recognize her from the Dexter cast as Hannah McKay. Or, you might know her from her more sci-fi/action-oriented roles, like in the Tomorrow War cast or as Miranda Lawson in the popular Mass Effect video game series. In case you do not recognize the Australian-born actress at all, allow us to help you become more properly acquainted by recommending the following Yvonne Strahovski movies and TV shows, starting with her American television debut.
TV SHOWS・11 DAYS AGO
Variety

The fifth and final season of Netflix historical drama “The Last Kingdom,” due in 2022, will be followed by a two-hour feature film titled “Seven Kings Must Die.” The film will stream on Netflix. The news was announced by Alexander Dreymon, who plays the lead role of Uhtred, at the London Comic Con on Sunday. Based on the novels of Bernard Cornwell, filming on “Seven Kings Must Die” will begin in Budapest in early 2022, with Dreymon reprising his role. Many of the series’ characters will return, alongside several new faces. The film will be written by Martha Hillier, produced by Nigel Marchant,...
TV & VIDEOS・2 DAYS AGO

Squid Game has been watched by more than 100 million fans all over the world setting the record for the most-watched show of all time on Netflix. In a tweet, Netflix has officially confirmed this record revealing that more than 111 million fans have tuned in to watch the South Korean thriller that pits a group of humans in a game of death for a pool of prize money.
TV SERIES・14 DAYS AGO
TheDailyBeast

Margaret Atwood, the celebrated author of feminist dystopian novel The Handmaid’s Tale, angered some of her fans this week when she tweeted out an op-ed by another writer titled, “Why can’t we say ‘woman’ anymore?” While Atwood did not post a comment about the Toronto Star column, her followers saw her tweet as an endorsement of the message, which argued against gender-neutral language. Replies ranged from “Welp, that’s an unfollow,” to claims that she was being transphobic to mocking comments like, “Oh no you’re right I just tried to say it and a bunch of non-binary people stormed into my apartment and made me throw out my dresses.” Atwood did not back down, later tweeting that the op-ed author, Rosie DiManno, is “not a terf,” the acronym for trans-exclusionary radical feminist.
BOOKS & LITERATURE・7 DAYS AGO
Variety

Austin Stowell has been cast in the upcoming Showtime drama series “Three Women,” Variety has learned exclusively. The series is based on the book of the same name by Lisa Taddeo. It is described as a portrayal of American female desire, in which three women are on a crash course to radically overturn their lives. There is Sloane (DeWanda Wise), a glamorous entrepreneur in a committed open marriage until two sexy new strangers threaten their aspirational love story, and Maggie, a North Dakota student who weathers an intense storm after accusing her married English teacher of an inappropriate relationship. There is Lina...
TV SERIES・8 DAYS AGO
The Hollywood Reporter

Anna Kendrick, William Jackson Harper and more hit the red carpet at New York City’s DGA Theater for the world premiere of Love Life season two on Sunday. The second season of HBO Max’s anthology series switches its focus from Kendrick’s Darby Carter — who led season one — to Harper’s Marcus Watkins, who is forced to rebuild his life after his marriage unexpectedly implodes and leaves him hoping to find a love that will last. “We really put our character through the wringer this year,” co-showrunner and executive producer Bridget Bedard told The Hollywood Reporter during the Tribeca Fall Preview event....
TV SERIES・2 DAYS AGO

HBO Max and Hulu are retelling one of D-FW’s most gruesome tales. Here’s who’s set to star

It’s been 41 years since Candy Montgomery killed her friend with an ax on Friday the 13th in the victim’s home on a suburban Wylie street. The eight-day trial, held at the old courthouse in McKinney, drew capacity crowds. Montgomery was acquitted after pleading self-defense, prompting outrage. As she walked to her car, some yelled, “Murderer!”
DALLAS, TX・10 HOURS AGO
enstarz.com

Angelina Jolie and The Weeknd made headlines over the past few days after being spotted together again having a romantic dinner date in Giorgio Baldi, Santa Monica. Recently, a source finally revealed the valid reason why the two kept seeing each other over the past months. According to an insider...
CELEBRITIES・28 DAYS AGO
nickiswift.com

Before becoming the Duchess of Sussex, Meghan Markle initially rose to prominence through her time in Tinseltown. Starring as Rachel Zane in USA Network's "Suits," the former actor appeared in the show's first seven seasons before uprooting her life for royalty. She has also made appearances in prominent programs such as "90210," "CSI: NY," and "CSI: Miami," along with film appearances in "Get Him to the Greek" and "Horrible Bosses."
CELEBRITIES・15 DAYS AGO
NYLON

Here's Everything Coming To Netflix In November 2021

As temperatures drop and outdoor activities begin to wane in their appeal, many of us will find ourselves spending more and more time inside, glued to our television, desperate for something interesting to watch. Thankfully, Netflix has prepared for this very moment — in November, the streaming service plans to keep us occupied with an extensive array of new titles to choose from.
MOVIES・9 DAYS AGO

NCIS fans have been left disappointed as the latest episodes of NCIS and NCIS: Hawai'i were pulled from schedule on Monday evening - and replaced with reruns instead. New episodes of the long-running naval drama and its new spinoff have been airing on CBS at the new timeslot of 9pm and 10pm EST since mid-September, but unfortunately, fans of both series will have to wait another week for the next instalment.
TV SERIES・1 DAY AGO
Distractify

Many on social media agree that Bow Wow, born Shad Moss, gets a lot of deserved hate online. From the infamous scandal that birthed the Bow Wow Challenge to his rather corny antics on social media, it’s easy to see why he’s always on the receiving end of jokes. Despite how most people may feel about the rapper, no one can deny that he’s an icon.
MUSIC・1 DAY AGO
ComicBook

There are few stars in Hollywood as popular as Ryan Reynolds. Fans love the witty and charming actor, who has taken his superstardom to a whole new level after the release of Deadpool just five years ago. His new movies generate plenty of buzz, as do his various social media pages, and movie fans everywhere are consistently wondering when there will be new Ryan Reynolds titles to enjoy. The actor's next movie (Red Notice) may not be arriving until later this year, but one of his films from nearly a decade ago has recently added to Netflix, and fans have been flocking to watch one of the Reynolds projects they may have missed when it was first in theaters.
TV & VIDEOS・9 DAYS AGO
Hello Magazine

Ginger Zee left her fans and colleagues feeling absolutely elated as she shared on social media that there had been a big development in her career. The journalist revealed with an Instagram post that she now had a new title to add to her job description as of this week.
CELEBRITIES・11 HOURS AGO
Deadline

Freeform Orders Kristin Newman Comedy Pilot ‘What I Was Doing While You Were Breeding’; Chelsea Frei Leads Cast

EXCLUSIVE: Freeform has given a formal pilot order to What I Was Doing While You Were Breeding, a one-hour comedy based on Kristin Newman‘s (Only Murders in the Building) memoir, with Chelsea Frei (Dollface) set as the lead. Catherine Cohen (What We Do in the Shadows), Alice Hunter (Another Period) and Kosha Patel (Girlboss) also star in the pilot, written by Newman and to be directed by Becca Gleason (Summer ’03). Newman executive produces with Susanna Fogel (The Flight Attendant) and Blair Breard (Scenes from a Marriage). Freeform is the studio. What I Was Doing While You Were Breeding follows Kacey (Frei),...
TV SERIES・2 DAYS AGO
iHeartRadio

Angelina Jolie had a coy answer about her potential romance with The Weeknd.
CELEBRITIES・12 HOURS AGO
Washington Post

Dave Chappelle told his audience he has been canceled. A transgender activist says he continues ‘mocking us.’

After weeks of silence amid criticism that his latest Netflix special is harmful to the transgender community, Dave Chappelle said in a video posted to Instagram on Monday that he is “not bending to anybody’s demands.”. The five-minute clip shows Chappelle performing in Nashville this past weekend. “To the transgender...
CELEBRITIES・1 DAY AGO
Deadline

EXCLUSIVE: Emma Roberts (American Horror Story, Nerve), John Gallagher Jr. (Peppermint, The Newsroom) and two-time Oscar nominee Michael Shannon (Nine Perfect Strangers, Knives Out) will topline Spencer Squire’s first feature, Abandoned, which is also the first to be fully financed through the partnership between Vertical Entertainment and Three Point Capital. The recently wrapped thriller written by Squire, Jessica Scott, and Erik Patterson follows a mother, father, and infant son as they move into a remote farmhouse, which harbors a dark, tragic history. As their home’s past is revealed, the mother’s fragility escalates to a state of psychosis that jeopardizes her own...
MOVIES・1 DAY AGO