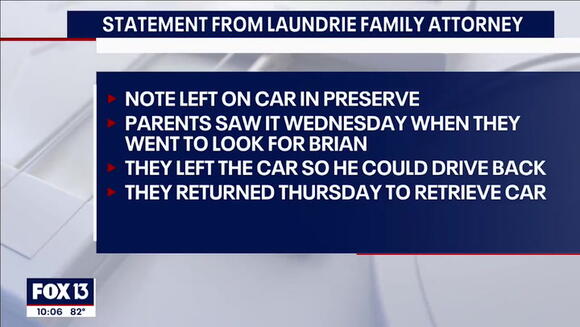 The family of Brian Laundrie , who has allegedly been missing for a number of days amid the search for his girlfriend Gabby Petito , have said they found a note on his vehicle from police asking it to be removed.

The 23-year-old, who police in North Port, Florida, last week named as person of interest in the disappearance of Ms Petito, 22, was said to have gone missing last Tuesday or Wednesday.

An attorney for the Laundrie family reportedly told ABC7 that he told them he was going on a hike in the nearby Carlton Reserve, and failed to return to his parents’ home, which he and Ms Petito had shared together.

When they went looking for him on Wednesday, his family found only his vehicle parked by the reserve, which spans more than 24,000 acres and is located just north of his parents’ home.

Steven Bertolino, the Laundrie attorney, said police had put a note on the vehicle asking for it to be removed, and the family were said to have left it until Thursday, in case he returned to it.

It comes after investigators found a body “consistent” with that of Ms Petito – eight days after she was reported missing on 11 September, and a long police search.

Her fiancé, Mr Laundrie, returned alone from an almost two-months long road trip with Ms Petito at the end of August. He has been accused of refusing to work with police and investigators, before going missing himself.

Authorities said on Sunday that the location where the body was found was not far from where a van belonging to Ms Petito and Mr Laundrie was filmed by two passers-by, along a dirt road near Spread Creek, Wyoming, on 27 August.

Ms Petito last posted on social media two days before, on 25 August, when she is also believed to have last contacted her family.

Police in Moab, Utah, last week released body camera footage from 12 August showing officers talking to Ms Petito and Mr Laundrie after they were called to reports of a domestic incident between the two.

In the video, Ms Petito told officers she had increasingly argued with her fiancé and that she sometimes became physical with him. No charges were filed and the two spent the following night apart, before continuing on to Wyoming.

Gabby's behavior on the body am is very consistent of an abused woman. she blamed herself for everything. that's battered woman syndrome.

if his parents took their time reporting him missing and if they indeed were the ones to retain the lawyer, they are complicit and may be held accountable in this crime.

Maybe his parents are deliberately misleading police to Carlton Reserve in order to give him more time to get out of the country. Seems odd with the area authorities have covered that they haven't found him or something to show he is there. I am sure if he was going to commit suicide they would have found his body by now. I don't believe he was ever at the Reserve. There 's so many questions surrounding Gabby's death.....the autopsy will tell how she died but not who did it! That part will have to be proven in a court of law when he is caught. I said in an earlier comment we don't know for sure if her death was intentional or accidental......only he knows, but he certainly isn't behaving like it was an accidental death!

Gabby Petito's stepfather has described the devastating moment he knew his stepdaughter was dead. Tragically, Gabby's body was discovered last month after she went missing following a road trip with her fiancé Brian Laundrie, who returned from their trip alone. Gabby's stepdad Jim Schmidt says as soon as police described...
CELEBRITIES・17 DAYS AGO
The Independent

How were Brian Laundrie’s remains missed for 33 days but then found by his parents in a few hours?

Wednesday, 20 October, began like every other in the 33 days since Brian Laundrie was reported missing.Then, around midday, came a flurry of news. Chris and Roberta Laundrie were at the Myakkahatchee Creek Environmental Park and had contacted law enforcement the night before to ask them to accompany them to the site.Within minutes, a “dry bag” containing personal items belonging to Mr Laundrie had been recovered.Brian Laundrie - update: FBI identifies remains as fugitive’s family ‘not doing interviews’, says attorneyAlmost as soon as the discovery hit the internet, attorney Steve Bertolino released a statement that changed everything.“After a brief...
PUBLIC SAFETY・13 HOURS AGO
foxwilmington.com

A shredded wetsuit tells the tale of a close encounter with an alligator. Jeffrey Heim took Inside Edition to the spot where it happened. The 25-year-old was scuba diving in the Carlton Reserve, the same alligator-infested swamp land that is the focus of national attention in the search for Brian Laundrie, the wanted fiancé of Gabby Petito. Heim says he was hunting for giant prehistoric megalodon shark teeth that he sells through his company.
ANIMALS・28 DAYS AGO
The Spokesman-Review

A Lummi Nation woman who had been missing since Sept. 3 has been found alive, according to her aunt and one of her friends. Relatives of Reatha May Finkbonner, 30, said she was reported missing by her family after she was separated from friends in Las Vegas. She was not heard from for 20 days, relatives said.
LAS VEGAS, NV・27 DAYS AGO

Gabby Petito Case: Coroner Resigns from Hospital After Petito’s Cause of Death Revealed

The coroner from the Gabby Petito case resigned from his hospital on Thursday but will stay in his medical examiner county role. The Jackson Hole News and Guide reported on Oct. 15 that Dr. Brent Blue would not continue his contracted physician job at St. John’s Health, Family Health, and Urgent Care. The next day, Blue said he would talk with the hospital with his lawyer after he returned from vacation.
POLITICS・2 DAYS AGO
deseret.com

Brian Laundrie’s attorney says he has “no idea” on the location of the storage unit Brian Laundrie visited in August amid his cross-country road trip with girlfriend Gabby Petito. Earlier this week, Steven P. Bertolino, the attorney for the Laundrie family, confirmed to Fox 5 News in New York that...
POLITICS・16 DAYS AGO
CrimeOnline

As the hunt for Brian Laundrie continues, questions multiply concerning the fugitive’s parents. What did they know regarding the death of 22-year-old Gabby Petito and when did they know it? The big question right now: Did Brian Laundrie’s mom know that Gabby would never come home?. Plus, a Montana tourist...
ENTERTAINMENT・22 DAYS AGO
CrimeOnline

Wisconsin authorities are searching for a man and his baby after they vanished following a car crash. According to investigators, 24-year-old Jordan and his 4-month-old child Serenity were in a minor car accident in Lamartine on Thursday night, at around 10:30 p.m. After the vehicle crashed and landed into a ditch off of Brown Street, Jordan took the baby and walked toward some nearby woods.
ACCIDENTS・7 DAYS AGO

While questions about the type of relationship Brian Laundrie and Gabby Petito had continue to raise concerns, witnesses who encountered the pair shortly before she was killed say something was definitely off between the couple. In fact, two people are now alleging that they believe Brian forced Gabby to either...
RELATIONSHIPS・8 DAYS AGO
CrimeOnline

Gabby Petito’s stepfather was the first person to receive the news that her body was found in a national park, thousands of miles away from home. Stepdad Jim Schmidt was in Wyoming on September 19, searching for 22-year-old Gabby when he got a call from the police, who told him that a body had been found at the Bridger-Teton National Forest in Wyoming.
PUBLIC SAFETY・16 DAYS AGO
hotnewhiphop.com

It’s been nearly two weeks since the remains of 22-year-old Gabby Petito were discovered in Grand Teton National Park, but her fiancé, and the main person of interest in her death, Brian Laundrie, is still missing. As the investigation into the YouTuber’s untimely death continues, more and more information is...
CELEBRITIES・21 DAYS AGO
Outsider.com

The Gabby Petito case drew in spectators far and wide from the very start– especially with so many strange details surrounding her disappearance. With so many invested, criticisms and opinions abounded every step thereafter. The Moab “incident” between Gabby, Brian Laundrie, and local police especially drew in heat for its handling. Upon seeing the bodycam footage, the public immediately launched their harsh words. They couldn’t understand how the police “missed” something so “obvious.” They namely cited signs of domestic abuse here.
PUBLIC SAFETY・10 DAYS AGO

A Kansas man is finally reunited with his wallet after losing it almost 50 years ago. Great Bend Police say the wallet had been turned into them with several items inside, including a Social Security card and an expired 1974 driver’s license. Authorities were able to get into contact with the wallet’s owner, who was reportedly very happy to have it back because he made the wallet himself many years ago.
PUBLIC SAFETY・11 DAYS AGO
News 8 WROC

The attorney for the Laundrie family, says a phone was purchased on September 4th and Brian Laundrie opened an account with AT&T for that phone.
NORTH PORT, FL・22 DAYS AGO
Insider

A Florida woman is suing Brian Laundrie's dad for $40. She says it's an effort to 'break their silence' around Gabby Petito's death.

The Laundries' lawyer says the family is being "harassed with lawsuits for a $40 sign that was more than likely on their property and should be considered litter."
FLORIDA STATE・3 DAYS AGO
wfla.com

NORTH PORT, Fla. (WFLA/NBC) — The parents of Brian Laundrie, the fiancé of homicide victim Gabby Petito, were seen leaving their home Thursday morning followed by police officers. According to NBC News, the Laundries left their home alone in a pickup truck at around 8:15 a.m. and returned shortly after...
NORTH PORT, FL・29 DAYS AGO
cbs17

BLOWING ROCK, NC (FOX 46 CHARLOTTE) – Preliminary information gathered by authorities suggests the body found along the Blue Ridge Parkway over the weekend is not related to any other ongoing investigations following speculation the body found may have been that of Brian Laundrie, the National Parks Service said Monday.
BLOWING ROCK, NC・11 DAYS AGO
WOWK

Brian Laundrie’s parents leave for shopping trip, are confronted by woman with bullhorn when they return

TAMPA, Fla. (WFLA) — Brian Laundrie’s parents returned home from a shopping trip on Tuesday and faced a woman shouting through a bullhorn. For days, protesters have gathered at Christopher and Roberta Laundrie’s North Port home, where their son, Brian Laundrie lived with Gabby Petito before her disappearance and death.
TAMPA, FL・24 DAYS AGO
Radar Online.com

Brian Laundrie's parents left their home "four to five hours" in the short gap from when the park connecting to the Carlton Reserve was opened to the public and human remains were found. Article continues below advertisement. According to NewsNation Now reporter Brian Entin, Christopher and Roberta Laundrie went on...
PUBLIC SAFETY・1 DAY AGO
Fox News

The North Port, Florida, Police Department on Thursday reported 16-year-old Desirae Malava-Ortiz missing. The 16-year-old left her residence on Roxbury Circle earlier this week by "unknown means of travel," wearing ripped jeans, a sweatshirt and white shoes. Police did not find Malava-Ortiz at her boyfriend's house nor her place of...
FLORIDA STATE・14 DAYS AGO