MLB power rankings: Yankees and Padres are on the outside looking in 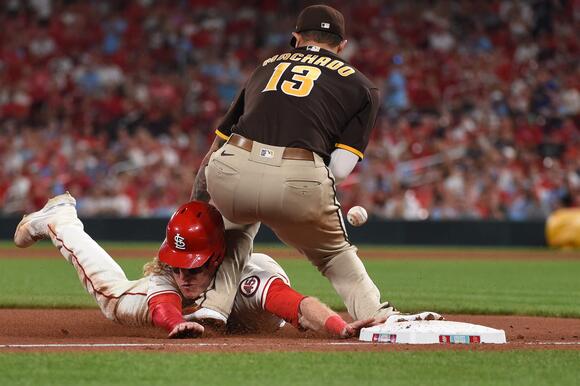 Most of Major League Baseball's division races are settled heading into the final fortnight of the regular season, but the NL East and NL West are separated by two games or less and wild-card spots are still up for grabs.

Through Sunday, the Boston Red Sox are a game ahead of the Toronto Blue Jays for the top AL wild-card spot, while the New York Yankees (1½ GB), Oakland Athletics (2 GB) and Seattle Mariners (4 GB) remain in the race.

In the NL, the St. Louis Cardinals' eight-game winning streak has them holding the second wild-card spot with the Cincinnati Reds (3 GB), Philadelphia Phillies (3½ GB) and San Diego Padres (3½ GB) in pursuit.

This article originally appeared on USA TODAY: MLB power rankings: Yankees and Padres are on the outside looking in

The MLB Daily Dish is a daily feature we’re running here at MLBDD that rounds up roster-impacting news, rumors, and analysis. Have feedback or have something that should be shared? Hit us up at @mlbdailydish on Twitter or @MLBDailyDish on Instagram. The Cardinals have parted ways with manager Mike Schildt....
MLB・11 DAYS AGO
NJ.com

The Ryan LaMarre era has come and gone. Read our comprehensive how to bet on baseball guide. MLB Trade Rumors report the New York Yankees outfielder has opted for free agency. LaMarre had a pair of call-ups from Triple-A Scranton/Wilkes-Barre this season. His final stats were less than impressive: .190 batting average, 21 at-bats, 3 runs, 4 hits, 2 home runs, 4 RBI, 1 stolen base, 2 walks, 6 strikeouts and a .768 OPS in nine games. The highlight came on July 21 with his walk-off hit in a 6-5 extra-innings win over the Philadelphia Phillies.
MLB・12 DAYS AGO
The Spun

If the Boston Red Sox are going to take down the New York Yankees in the American League Wild Card Game tonight, they’ll need to do it without star slugger J.D. Martinez. Martinez was not included on Boston’s roster for the AL Wild Card Game due to a sprained left ankle. He suffered the injury in the fifth inning of Boston’s regular-season finale on Sunday.
MLB・21 DAYS AGO
The Spun

It’s safe to say Pete Rose was not a fan of the lineup the New York Yankees used for the American League Wild Card Game . During a recent discussion with USA Today’s Bob Nightengale, the former MVP bashed the team’s “all-or-nothing” approach. “That was the worst (expletive) lineup they...
MLB・12 DAYS AGO

The internet never forgets. Former New York Yankees slugger Alex Rodriguez has been covering the 2021 MLB playoffs by resuming his role as a studio analyst for FOX Sports. Last week, Rodriguez was analyzing the American League Division Series between the Boston Red Sox and Tampa Bay Rays with David Ortiz, Frank Thomas and Kevin Burkhardt. The gang was discussing a video clip from Game 1, when the Rays were seen eating popcorn in the dugout during the seventh inning of their 5-0 win.
MLB・14 DAYS AGO
Empire Sports Media

It’s still early in the offseason for the New York Yankees. The World Series will begin on Tuesday, between the Houston Astros and the Atlanta Braves, and the Bombers, once again, have to see it on TV. But that doesn’t mean they can’t start to make some preliminary plans with the 2022 campaign in mind.
MLB・1 DAY AGO
NJ.com

MLB scout says what Yankees should do with Gary Sanchez

The New York Yankees have a big one to make when it comes to their starting catcher, thanks to Gary Sanchez. The two-time All-Star has struggled at and behind the plate during the last three seasons, eventually losing his status as full-time starter and landing in a platoon situation with Kyle Higashioka.
MLB・8 DAYS AGO
FanSided

Joey Gallo’s girlfriend is happy to have his undivided attention after his season ended on Tuesday night. Following the wild-card game — which ended in a 6-2 Yankees loss to the Red Sox — Claire Danko shared a PDA snap from the past of her with the Yankees outfielder. “I...
MLB・20 DAYS AGO
ClutchPoints

The New York Yankees flamed out of the 2021 MLB postseason after getting wrecked by the Boston Red Sox in a 6-2 American League wild-card game loss at Fenway Park on Tuesday. The Yankees crashing and burning against their fiercest rival and despite a luxurious payroll only add fuel to an offseason that’s going to have them answering plenty of questions, including whether the team’s future would still include veteran outfielder Brett Gardner — at least until the end of the 2022 MLB season.
MLB・20 DAYS AGO
Larry Brown Sports

Jose Altuve was targeted by Boston Red Sox fans with a profane chant during Game 3 of the ALCS at Fenway Park on Monday night. Red Sox fans could be heard chanting, “f— Altuve” during Game 3. The chants began early in the game, according to reporters in attendance. The chants continued even in the third inning after Altuve was unable to pick a throw that bounced into second while covering the bag.
MLB・8 DAYS AGO
chatsports.com

The New York Yankees face an interesting off-season as general manager Brian Cashman tries to navigate his future team. With a number of players on long-term contracts, is unlikely he’s able to find any trade partners that would give them a bit of financial relief. However, the Bombers added more high-priced players last season at the trade deadline than sent away, which has presented an interesting conversation, especially regarding lefty slugger Joey Gallo.
MLB・10 DAYS AGO

Carlos Correa is going to get paid. It’s just a matter of how much the two-time All-Star will be offered. Correa headlines a bumper crop of free-agent shortstops, which also includes the Los Angeles Dodgers’ Corey Seager, Colorado Rockies’ Trevor Story and New York Mets’ Javier Baez. So what will...
MLB・13 DAYS AGO
NESN

What happens when a longtime franchise stalwart and a high-priced superstar collide inside a Major League Baseball clubhouse? Just ask the New York Yankees. That reportedly was a situation the Bronx Bombers dealt with this season, as NJ Advance Media’s Bob Klapisch on Sunday detailed an argument involving veteran outfielder Brett Gardner and ace Gerrit Cole.
MLB・2 DAYS AGO
WCVB

HOUSTON — The Houston Astros will likely be playing without an ace pitcher for the upcoming American League Championship Series against the Boston Red Sox. Right-hander Lance McCullers recently underwent an MRI and is "under further evaluation" because of an arm injury, Astros manager Dusty Baker told reporters Thursday. The Houston Chronicle reported that McCullers reported experiencing tightness in his forearm.
MLB・12 DAYS AGO
BBC

The Houston Astros have reached their third World Series in five years after beating the Boston Red Sox 4-2 in the American League Championship Series. Having trailed 2-1 in the best-of-seven ALCS, the Astros bounced back by winning the next three games, and blanked the Red Sox 5-0 in Friday's game six at Minute Maid Park, Houston.
MLB・4 DAYS AGO
NJ.com

Joe Espada is destined to become a big-league manager. But it won’t be with the San Diego Padres. That’s according to the Boston Globe’s Pete Abraham:. Astros bench coach Joe Espada is a future manager, but it may not be next season. The Padres are expected to bring in somebody with previous experience.
MLB・9 DAYS AGO
InsideThePinstripes

The Yankees have plenty of options to choose from at shortstop on the free agent market this offseason. According to one MLB insider, however, there's one superstar available that would be the perfect fit. ESPN's Buster Olney recently broke down each of the five top-tier shortstops entering free agency this...
MLB・1 DAY AGO
NJ.com