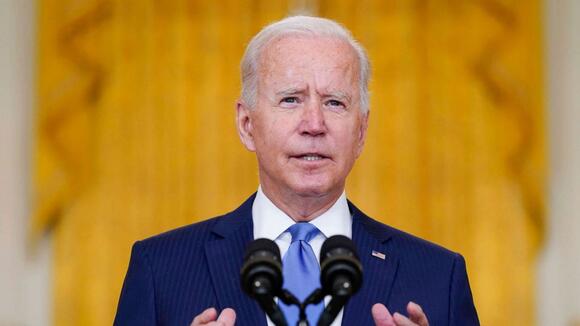 A new book details scenes from the early days of Joe Biden's presidency, including that Russian President Vladimir Putin reportedly complained to Biden about calling him a "killer" in an ABC News interview.

"I'm upset you called me a killer," Putin said to Biden on an April 13 phone call, Washington Post journalists Bob Woodward and Robert Costa wrote in their new book, "Peril."

Biden told Putin his comment, made in a March 16 interview with ABC News' George Stephanopoulos, was "not something premeditated," according to the book.

"I was asked a question. I gave an answer. It was an interview on a totally different topic," Biden said, before he invited Putin to meet with him in person.

Stephanopoulos interviewed Woodward and Costa Monday on "Good Morning America," in their first interview about the book's contents.

The book, obtained by ABC News ahead of its Sept. 21 release, recounts the 2020 presidential election and the chaos of the final months of the Trump administration -- before and after the Jan. 6 Capitol riot -- based on more than 200 interviews with firsthand witnesses and participants.

"Peril" also chronicles the first several months of Biden's presidency, detailing his administration's efforts to respond to the coronavirus pandemic, early efforts to work with Congress and internal deliberations over the American withdrawal from Afghanistan.

This includes how Biden has apparently adjusted to life in the White House, which he reportedly called "the tomb" and likened to the Waldorf Astoria hotel.

"It was lonely. Cold. The virus made social events impossible, at least at the start," Woodward and Costa wrote, adding that Biden preferred "relaxing with the grandkids back in Delaware."

"Being upstairs at the White House feels like you're staying at someone else's house," White House Chief of Staff Ron Klain is quoted as telling others, according to the book.

The book also describes how Biden and his aides reportedly refer to Trump in private: The president and his advisers "hated to utter Trump's name," and aides avoided using "the 'T' word," the authors claim.

"Trump's existence permeated the White House, even the residence. One night, Biden wandered into a room where a huge video screen covered the wall. To relax, Trump used to upload programs to virtually play the world's most famous golf courses," they wrote. "'What a f------ a------,' Biden once said as he surveyed the former president's toys."

Biden's aides "noticed he could be prickly and tough at times and would walk into the Oval Office unhappy some mornings about another round of Trump talk on MSNBC's pundit roundtable, 'Morning Joe'," Woodward and Costa wrote in the book.

Woodward and Costa claimed Biden's aides worked to keep him away from "unscripted events or long interviews" to avoid gaffes, a "cocooning of the president" known as "the wall," they wrote.

On Afghanistan, Biden eventually overruled Secretary of State Antony Blinken and Defense Secretary Lloyd Austin in his decision to withdraw U.S. troops, after both secretaries suggested a phased pullout to try to encourage a political settlement with the Taliban, according to "Peril."

"Our mission is to stop Afghanistan from being a base for attacking the homeland and US allies by al Qaeda or other terrorist groups, not to deliver a death blow to the Taliban," Biden said in a National Security Council meeting, according to the book.

Biden "said he did not know what would come next. The outcome was unclear, he acknowledged," they claimed in the book.

if he is so uncomfortable in the white house why don't he just give it back to trump? at least there was only orchestrated chaos then. Biden has brought the worst out. he needs to be impeached and tried for treason. there's so much evidence of his corruption. you demonrats just don't care tho. you know he's a shyte show!

the joke is on Dems because the mental decline is in the man they put in , he says our country is back and thinks that. By making it utter confusion and division just like in his mind.So who has the mental decline? It was not president trump.

Russia and China's deepening ties have worried US officials, but some say Moscow should be worried about its increasingly powerful partner.
POLITICS・2 HOURS AGO
CNN

(CNN) — President Joe Biden has once again refused to assert executive privilege over more documents that former President Donald Trump has sought to keep out of the hands of the committee investigating the January 6 attack on the US Capitol. According to letter obtained by CNN, White House counsel...
POTUS・1 HOUR AGO
Fox News

President Joe Biden jokingly told a group of elementary school students on Monday that one of his jobs as president is to "avoid" answering reporters' questions. As he finished remarks in a classroom in New Jersey's East End Elementary, Biden stopped to point at the press in the back of the room and say, "As president, see all these people here, they're with you all the time."
PRESIDENTIAL ELECTION・5 HOURS AGO
Newsweek

"When you've got a candidate who spoke at a 'Stop the Steal' rally, you can bet he's not going to be a champion of democracy," Obama said.
NEWARK, NJ・1 DAY AGO

The White House has branded itself as the 'Biden-Harris' administration, but the two, once inseparable, are now spending more time apart.
LOS ANGELES, CA・11 HOURS AGO
Newsweek

WASHINGTON (AP) — The Senate’s willingness to confirm a president's nominees took a downward turn during Donald Trump’s first year in office. And it has only gotten worse for President Joe Biden. About 36% of Biden's nominees have been confirmed so far in the evenly divided Senate, a deterioration from...
PRESIDENTIAL ELECTION・19 HOURS AGO
The Independent

Relatives of more than two dozen American hostages and wrongful detainees held overseas told President Joe Biden in a letter on Monday that they questioned his administration's commitment to bringing their loved ones' home.In the letter, obtained by The Associated Press, the family members complained that the administration seemed to be getting “bogged down in burdensome processes or policy debates that keep our loved ones from coming home and keep us uninformed of what you can and cannot do to help us.”“We need to be shown that the promises of your administration to prioritize the return of our family...
FAMILY RELATIONSHIPS・7 HOURS AGO

‘The way I said it was not appropriate’: Biden backs DOJ independence in Jan. 6 investigation

The president last week had stated his support for prosecuting those who fail to appear under subpoena before the House select committee probing the insurrection.
BALTIMORE, MD・1 DAY AGO
Fox News

Youngkin on Biden: This is 'what a failed presidency looks like'

Virginia Republican gubernatorial candidate Glenn Youngkin told Fox News that President Biden has a "failed presidency" and that the "sun is setting" on the political career of his Democratic opponent, former Virginia Governor Terry McAuliffe. Fox News Washington correspondent Mark Meredith asked Youngkin if he was worried that Biden will...
PRESIDENTIAL ELECTION・1 DAY AGO
AFP

Republican voters show strong support for Trump as a potential presidential candidate in the 2024 election.
PRESIDENTIAL ELECTION・2 DAYS AGO

We heard extensively from Sen. JOE MANCHIN (D-W.Va.) yet again this morning. During a gaggle with reporters, he (1) reiterated he has still not budged beyond $1.5 trillion as a top-line number for the reconciliation bill, (2) once again expressed doubts about climate policies that he believes “penalize” carbon-intensive industries, (3) had reservations about expanding Medicaid coverage and adding benefits to Medicare, (4) seemed open to a wealth tax, and (5) thought a framework deal — though not full legislative language ready for a vote — could come this week. More from Marianne LeVine and Burgess Everett.
U.S. POLITICS・6 HOURS AGO
TIME

With his approval levels sagging and negotiations dragging on his signature infrastructure and social spending bills, President Joe Biden is bringing his pitch directly to the American public in an effort to press Democrats in Congress to come to a deal.
PRESIDENTIAL ELECTION・3 DAYS AGO
WJTV 12

WASHINGTON (AP) — A deal within reach, President Joe Biden and Congress’ top Democrats edged close to sealing their giant domestic legislation, though the informal deadline appeared to slip as they worked to scale back the measure and determine how to pay for it. Negotiations were expected to continue into the weekend, all sides indicating […]
PRESIDENTIAL ELECTION・1 DAY AGO
Washington Examiner

Senate Democrats confirmed someone who is arguably President Joe Biden’s worst nominee. You can thank former President Donald Trump for it. Catherine Lhamon, Biden’s nominee for the Department of Education’s Office for Civil Rights, was confirmed by a 51-50 vote, with every Democratic senator voting to confirm her and Vice President Kamala Harris breaking the tie.
PRESIDENTIAL ELECTION・3 DAYS AGO

Chris Wallace, Host of Fox News Sunday joined the Guy Benson Show to talk about President Biden’s reluctances to give sit-down one on one interviews with members of the press. Wallace reacted to Biden’s CNN townhall performance, saying. “Well, I don’t think it’s a big event, but I do have...
POTUS・3 DAYS AGO
WashingtonExaminer

President Joe Biden made a number of false or misleading claims at a town hall event in Baltimore on Thursday as he attempted to sell his party's spending legislation.
BALTIMORE, MD・3 DAYS AGO
The Guardian

‘We need him to deliver’: Biden faces wrath of disappointed supporters

When Joe Biden huddled with a group of historians in March, the conversation revolved around thinking big like one of his predecessors, Franklin Roosevelt, architect of the New Deal. Biden, it seemed, wanted to join him in the first rank of transformational US presidents. Six months later, a very different...
PRESIDENTIAL ELECTION・2 DAYS AGO
mediaite.com

Sen. Kennedy Tells Biden: ‘I Say This With Respect… You Just Got to Try Harder Not to Suck’

Sen. John Kennedy (R-LA) addressed President Joe Biden on Hannity Wednesday night and told him he needs to try harder at not sucking. After host Sean Hannity and House Minority Leader Kevin McCarthy (R-CA) expressed concern that vaccine mandates across the country would prompt an exodus of workers from various professions, the Fox News host turned to Kennedy.
CONGRESS & COURTS・4 DAYS AGO