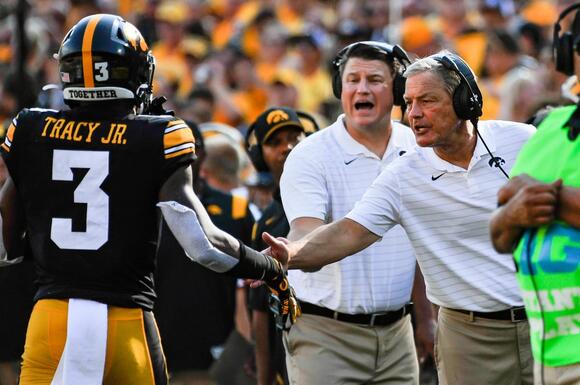 Check out odds, insights and more in our betting preview for the Iowa Hawkeyes vs. Colorado State Rams college football matchup on September 25, 2021.

Odds for Iowa vs. Colorado State

Former Oklahoma football coach Bob Stoops reveals who he thinks is the biggest threat to the Sooners for the Big 12 title. The Oklahoma Sooners haven’t always played like one of the best teams in the nation in the first month of the season, but they are still undefeated entering October.
OKLAHOMA STATE・13 DAYS AGO
Whiskey Riff

Arguably the most electric, while also the most hated, high school quarterback of all time. The man went to Ohio State and couldn’t win the starting job there, then went to Miami and was third string on the depth chart, and now he’s riding the bench at Utah. And now,...
OKLAHOMA STATE・1 DAY AGO
Eleven Warriors

After Gameday Visit to Ohio State, Father of Five-star Cornerback AJ Harris Feels His Son Would “Be Taken Care Of” in Columbus

There’s no higher priority at cornerback for Ohio State’s recruiting class of 2023 than landing AJ Harris. The five-star defensive back and Alabama resident visited Columbus with his mother and father this past weekend, taking in Ohio State's 66-17 victory against Maryland. AJ's father, Daniel Harris, spent a few minutes...
OHIO STATE・2 DAYS AGO
USA TODAY

'Is that good for college football?" James Franklin asked after several Penn State players were booed after they went down with injuries against Iowa.
COLLEGE SPORTS・2 DAYS AGO

Syracuse Has Renewed My Faith in Hate

The off week is exactly what I needed to overcome the shock of Clemson’s early-season abomination and recalibrate my hate. I admit it, after losing to NC State, the hate that I normally aim at the heart of the opponent has been aimed inward (not that the Tigers didn’t deserve hate after losing to that scummy, second rate outfit from Raleigh...no Drew...focus...focus the hate on Syracuse, don’t think about NC State). After another near humbling, and this time from a team hailing from almost Boston, if Clemson isn’t aware of its own mortality yet, I don’t think anything I say will help.
CLEMSON, SC・23 HOURS AGO
Corn Nation

ICYMI - The annual fundraiser for the broken chair is underway. Husker fans’ donations go to the Team Jack Foundation. If you can, make a donation and cheer on the Huskers to win back the best trophy NU plays for in the Big Ten!. The matchup with Minnesota wraps up...
NEBRASKA STATE・1 DAY AGO
Sportsnaut

Coming off first loss, No. 5 Alabama heads to Mississippi State

Some analysts believe Alabama’s loss to Texas A&M last weekend will prevent the Crimson Tide from reaching the College Football Playoff. Tim Tebow, however, thinks that loss could be a blessing in disguise. During this Friday’s edition of First Take, Tebow discussed Alabama’s chances of making the postseason. He made...
ALABAMA STATE・14 HOURS AGO

Who knew there was such thing as embarrassing behavior at football games? The Virginia Tech student body has raised enough concern during Hokie games that the school issued a statement promising to restrict attendance. Bad news for “Enter Sandman” at Lane Stadium and music to the ears of visiting teams.
VIRGINIA STATE・21 HOURS AGO
Sportsnaut

It’s time for the Week 7 edition of college football picks against the spread. As we continue our weekly series
NFL・18 HOURS AGO
Sports Illustrated

Florida State got its second win in a row this past Saturday against ACC foe North Carolina. It was the first time since weeks 4 and 5 of the 2019 season that FSU has had back to back conference wins. In this week’s ‘Five Plays that Changed the Game’, we look at the moments that led to the Seminoles 35-25 win.
FLORIDA STATE・1 DAY AGO

WATCH: No. 1 prospect discusses commitment to Florida State on ESPN

The commitment status of No. 1 prospect and five-star defensive back Travis Hunter has been a hot topic over the past couple of weeks. He unofficially visited Georgia in October which has some Florida State fans starting to panic. Hunter took to social media on Thursday afternoon to shoot down...
FLORIDA STATE・1 DAY AGO
Sports Illustrated

This is the time of the year when recruits start to emerge onto the recruiting scene. Eddie Kelly, a former tight end, made the move to defense for his senior season at Winter Garden (FL) - West Orange. That move is paying major dividends for Kelly as he earned an offer from Florida State on Thursday.
NFL・1 DAY AGO
Sports Illustrated

Five-star class of 2021 from Washington, D.C. Freshman. By now I'm sure you have heard that Oklahoma benched Heisman hopeful quarterback Spencer Rattler during the Texas game last week, and true freshman Caleb Williams came in to lead the Sooners to the largest comeback in Red River Rivalry history. TCU head coach Gary Patterson says he is preparing as if Williams is starting this weekend, however, Oklahoma coach Lincoln Riley has refused to name a starter before the game and shutdown practices to the public and media for the rest of the week. Either way, Patterson stated that he expects the OU game plan to remain similar no matter which 5-star QB takes the field Saturday night. That is to say Riley will find and exploit mismatches and both QB's are physical duel threats. With not much tape of Williams at the college level for opposing coaches to breakdown, expect Patterson to key in on containing the quarterback run and blitzing the fresh new quarterback often for the Frogs to have any chance Saturday night.
OKLAHOMA STATE・1 DAY AGO
Sports Illustrated

Florida State just keeps on rolling through the schedule, and ACC opponents have done little to slow it down this season. How to Watch Florida State at Virginia Tech in Women's College Soccer:. Match Date: Oct. 15, 2021. Match Time: 5:00 p.m. ET. TV: NESN Plus. Live stream the Florida...
FLORIDA STATE・17 HOURS AGO

The Oregon offense has been under a lot of scrutiny since the Ohio State game for slow starts and inconsistencies. The Ducks have another team coming into Autzen Stadium that they will be heavily favored against in the California Golden Bears, who sit at the bottom of the Pac-12 North.
CALIFORNIA STATE・1 DAY AGO
Sports Illustrated

The No. 9 Oregon Ducks (4-1, 0-0 Pac-12) meet a familiar opponent when they host the California Golden Bears (1-4, 0-0 Pac-12) on Friday, October 15, 2021 at Autzen Stadium in a Pac-12 clash. Check out the story below for all the info you need to know, including how to watch this matchup on FuboTV.
CALIFORNIA STATE・12 HOURS AGO
Sportsnaut

One of the top-ranked quarterback prospects in the Palmetto State, and in the country for the 2024 class, is Jayden Bradford of Chapin (S.C.) High School. The Clemson Insider recently caught up with Bradford to (...)
FOOTBALL・2 DAYS AGO