‘I Laid On The Floor And Just Bawled’: Minnesota TikTok Sensation, 79, Overwhelmed By Support After Scooter Breaks

MINNEAPOLIS (WCCO) — A Minnesota veteran who’s become a social media sensation is using his newfound fame to help other veterans.

Kenny Jary, a Navy veteran from Willernie in Washington County, has amassed more than 650,000 followers on TikTok, who know him as “Patriotic Kenny.”

“I’m happy and I’m happy with everybody,” Jary said. “I try to be that way and I love to be more than happy with other people that I can talk to and maybe make their day.”

Amanda Kline, Jary’s neighbor, helped create the account. The videos don’t have fancy edits or effects; as Jary likes to say, it’s just him being a common guy.

Jary wears his heart on his sleeve, too, as his followers learned this week in a video that’s since been viewed more than 10 million times. He broke down when he found out a GoFundMe had raised $5,000 to replace his beloved, but broken, mobile scooter. 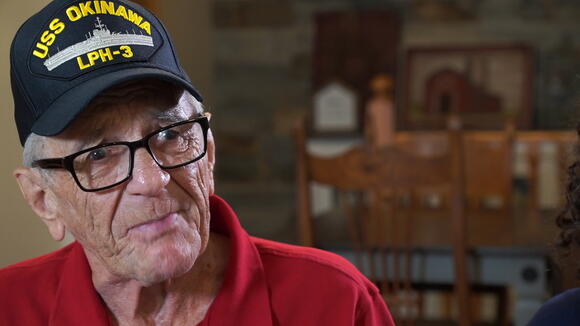 “I could not believe it,” Jary said. “I laid on the floor and just bawled because I’m an emotional person, so I’m so happy.”

After the new scooter, Jary plans to get some dental work, pay off debt, and help others, too.

“We have plans to give back to some veterans, but we haven’t announced it yet what the details are,” Kline said. “But it’ll be good.”

Kline teaches middle school at Metro Deaf School in St. Paul. Many of Jary’s videos feature a friend of his who is Deaf.

This is the kind of thing that reminds us there is still good in this world❣️ This is Karma at it's best. Thank you for your service, Kenny Jary. So happy for you! 💕

ST. PAUL, Minn. (WCCO) — It’s been a month since four victims were found shot to death in a SUV in a Wisconsin cornfield. Their families here in Minnesota are left to try to wrap their heads around the unimaginable. Police believe siblings Matthew Pettus and Jasmine Sturm, her boyfriend Loyace Foreman III, and her best friend Nitosha Flug-Presley were killed in St. Paul. WCCO’s Jennifer Mayerle spoke with loved ones left behind about the lives cut tragically short. “Jasmine, she had this big heart for giving. She just loved people, she was so kind,” her mom, Angela Sturm, said. Angela Sturm is...
SAINT PAUL, MN・1 DAY AGO
Toby Hazlewood

Patriotic Kenny with his new scooterGoodwordnews.com. A 79-year-old Navy Veteran from Willernie, Minnesota - Kenny Jary found himself stuck at home after his mobility scooter failed recently. The veteran who'd served aboard the USS Okinawa was rendered immobile by the breakdown - meaning he could no longer get to church or meet his friends for coffee.
MINNESOTA STATE・14 DAYS AGO
CBS Minnesota

MINNEAPOLIS (WCCO) — Rome wasn’t built in a day, the old saying goes. How about Minneapolis? For high schooler Matthew Ye, it took 770 hours. That’s how much time he’s spent over the last year recreating Minnesota’s largest city in the video game Cities: Skylines. Think of it like a modern day SimCity. Players create the infrastructure of a city — imagined or, in Ye’s case, real. Everything from the buildings to the roads to the stoplights. Matthew Ye’s virtual Minneapolis (credit: Matthew Ye) Ye said before this project, he mostly made fictional cities in the game, which he’s been playing for about...
MINNEAPOLIS, MN・3 DAYS AGO
CBS Minnesota

MINNEAPOLIS (WCCO) — Pediatric ICU nurse Grace Brooks says the past few months have been very challenging. “It’s been rough,” Brooks said. “But we’re hanging in there.” Her colleagues at Children’s Minnesota have weathered the pandemic, staffing shortages happening nationally, and a recent alarming rise in other viruses among children. “I definitely hit my 10,000 steps a day running around a bit more,” she said. “You can tell it’s starting to wear on folks but we’re doing our best.” After another tough weekend at work, Brooks had an idea. She put out a call Sunday on her Nextdoor App asking neighbors and strangers if they...
MINNEAPOLIS, MN・2 DAYS AGO

‘My Heart Just Sunk’: Youth Club Reeling After Another Child Shot In Minneapolis

MINNEAPOLIS (WCCO) — Community members are once again grasping for solutions after someone shot another young person in Minneapolis. A 15-year-old boy was listed in critical condition Tuesday evening after being shot near a south Minneapolis park, where his sibling was playing in a youth football game. Minneapolis police say officers were called at about 6:45 p.m. to the intersection of 40th Street East and Columbus Avenue South, near Phelps Field Park. There, the victim was found suffering from a gunshot wound to the abdomen. He was soon rushed to HCMC for surgery. A Twin Cities North Football League youth game was...
MINNEAPOLIS, MN・1 DAY AGO
CBS Minnesota

MINNEAPOLIS (WCCO) — We all love to complain about how other people drive. Now, a new report looks at the best and worst drivers by state. The survey found that Wisconsin’s drivers are ranked as the 10th worst in the nation, whereas Minnesota’s drivers are pretty close to the middle of the pack, ranking 20th best in the nation. Meanwhile, Iowa drivers were ranked the absolute worst in America. Drivers in each state were ranked on four key statistics: accidents, speeding tickets, DUIs, and the number of citations. “Iowa became the worst by ranking high in nearly every statistical category in 2021. The...
IOWA STATE・1 DAY AGO
ABC News

As any parent knows, trying to care for one baby is a lot, then multiply that by two for twins, and it's a lot to handle, as seen in a now-viral video. The video, which went viral on TikTok, shows Alexis LaRue, 22, trying to hold her twin 7-month-old daughters, Camila and Elena, who weigh around 21 pounds each.
BEHIND VIRAL VIDEOS・1 DAY AGO
CBS Minnesota

MINNEAPOLIS (WCCO) — With the state health department opening more free rapid test sites this week, Minnesota health officials on Tuesday reported an additional 2,361 virus cases and 26 more deaths due to COVID-19, including one teenager in Hennepin County. According to the Minnesota Department of Health’s daily update, the state’s total positive cases have risen to 768,112 since the pandemic began, with 8,515 deaths attributed to the virus. Minnesota’s latest rolling seven-day average positivity rate appears to be on the waning side of a crest, now at 8.1% from 8.5% last week. The line for high risk is drawn at 10%. There...
MINNESOTA STATE・1 DAY AGO

MINNEAPOLIS (WCCO) — One of the children shot in Minneapolis this summer will be heading home from the hospital soon, his family says. Ladavionne Garrett Jr.’s grandmother posted on social media that her grandson will be coming home in less than a couple of weeks. Ladavionne Garrett Jr. (credit: GoFundMe/Lisa Clemons) The 10-year-old has been in the hospital recovering for months, as the search for answers continues in his shooting. Both of the boy’s parents posted the news on their Facebook pages Tuesday, saying Garrett will be released Nov. 1. “I love u [sic] son,” the boy’s dad wrote. “Ladavionne Jr. coming home God is...
MINNEAPOLIS, MN・2 DAYS AGO
CBS Minnesota

‘No Brainer’: Football League Opts To Move Games Out Of Minneapolis After Shooting Left Spectator In Critical Condition

MINNEAPOLIS (WCCO) — A Twin Cities football league will no longer play in Minneapolis this season after a teenager was shot Tuesday night while watching a youth game. John Swanson, the commissioner of the Twin Cities North Football League, said the decision not to play in Minneapolis after Tuesday night was a “no brainer.” He described playing in the city as a liability for safety and scheduling reasons. He added that referees and “a lot of teams” also don’t want to play in the city due to safety concerns. The shooting Tuesday left a 15-year-old boy in critical condition....
MINNEAPOLIS, MN・21 HOURS AGO
CBS Minnesota

MINNEAPOLIS (WCCO) — The Centers for Disease Control and Prevention says American Indians and Alaska Natives are dying from COVID-19 at a rate nearly two-and-a-half-times higher than white Americans. It’s an alarming statistic. One that’s bringing attention to the effort by one Minnesota man to keep Native traditions alive. Indian Mounds Park in St. Paul is a place for picturesque viewing, but it’s what you can’t see that’s most special. Rob Gill’s Dakota ancestors were some of the many whose remains were buried at the park. There were 36 mounds, but only six remain today due to city development in...
SAINT PAUL, MN・2 DAYS AGO
CBS Minnesota

MINNEAPOLIS (WCCO) — Many parts of Minnesota will see rainfall Wednesday, and the precipitation will precede a plunge in temperatures. Parts of southern and western Minnesota were seeing showers in the morning hours, and by noon thunderstorms were hitting the metro and lifting northward. (credit: CBS) The metro should get a break in the afternoon hours before more rain moves in after dinner. Hail was falling in Lakeville at midday, and St. Paul and the east metro will likely see some as well. (credit: Kurt Schaeffer) In the evening and into the overnight hours, showers will sprinkle areas north of the Twin Cities and in western...
MINNESOTA STATE・2 DAYS AGO

Internet sleuths have come out of the woodwork in the Gabby Petito case. Blogger Shaynah Dodge is one of them. Minnesota blogger Shaynah Dodge has been closely documenting Gabby Petito’s on her blog page with a little over 77,000 followers. Recently, she dissected Brian Laundrie’s Pinterest page and uncovered a few things that she deems as suspicious. However, there’s an account linked to his mother, Roberta Laundrie, and Gabby Petito linked to his.
PETS・3 DAYS AGO
Black Enterprise

A 61-year-old Florida man is under fire after news of his wedding went viral for all of the wrong reasons. Michael Haugabook is being labeled as a predator after he was accused of marrying Deja Haugabook as soon as she turned 18. Deja is also Michael’s goddaughter and the two shared family history prior to their controversial nuptials.
FLORIDA STATE・1 DAY AGO
99.9 KTDY

What if I told you that finding a six-foot alligator in your backyard wasn't the alligator that you needed to worry about?
ANIMALS・14 DAYS AGO
Popculture

Duane "Dog" Chapman spent almost a month searching for Brian Laundrie, the person of interest in Gabby Petito's death, but Laundrie's remains were found at the Carlton Reserve on Wednesday. In an interview with InTouch Weekly on Thursday, Chapman claimed Laundrie might be alive today if his parents cooperated sooner. However, the circumstances of the 23-year-old Laundrie's death remain unknown.
ANIMALS・17 HOURS AGO
Fox News

NORTH PORT, Fla. – The Gabby Petito autopsy finding that she died of homicide by strangulation indicates a likelihood of domestic violence and deadly intent at the Wyoming campsite where an FBI-led investigation uncovered her remains last month, experts tell Fox News. Her fiancé, Brian Laundrie, who shared the campsite...
NORTH PORT, FL・8 DAYS AGO
GMA

Couple adopts 2 pairs of twins: 'They all needed somebody to love them'

Karen and Tobias Thompson adopted two sets of twins to keep the family together.
FAMILY RELATIONSHIPS・27 DAYS AGO
Black Enterprise

Comedian, Actor, Ricarlo Flanagan Dies From Covid-19 After Implying Kyrie Irving Should Get The Vaccine

Stand-up comedian and actor Ricarlo Flanagan died from COVID-19 complications last week at 40, his reps confirmed. “Sadly this pandemic has taken the life of an extremely talented performer and even nicer human being,” a representative told Variety. “Ricarlo will be greatly missed.”. Flanagan’s passing came a few weeks after...
BROOKLYN, NY・2 DAYS AGO