Kate Winslet, Accepting ‘Mare Of Easttown’ Emmy, Shouts Out Nominees “In This Decade That Has To Be About Women Having Each Other’s Backs” 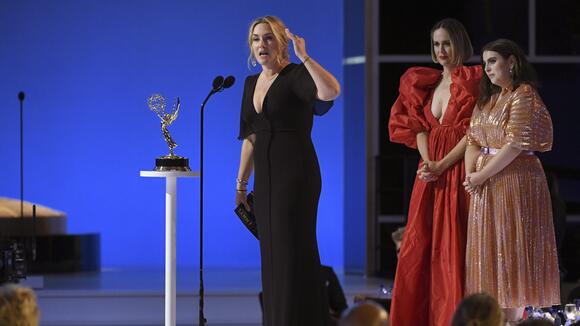 Kate Winslet added a second Emmy to her trophy shelf with Sunday’s Outstanding Actress in a Limited Series win for HBO ’s Mare of Easttown .

The Oscar winner, by all arguable accounts, disappeared into the role of the wise, patient, vaping, local Delco County small-town Detective Mare Sheehan, funky accent and all — a woman who was connected all too well, family wise et al, to the murder suspects in her town. The slow burn drama series mushroomed in its weekly viewership on HBO and HBO Max; the series finale notching a linear and digital record with 4 million viewers over Memorial Day weekend.

Winslet won in a fierce battle in the category against Cynthia Erivo who played Aretha Franklin in NatGeo’s Genius: Aretha, Michaela Coel as Arabella in HBO’s I May Destroy You, Anya Taylor-Joy as Beth Harmon in Netflix’s The Queen’s Gambit, and Elizabeth Olsen as Wanda Maximoff in Disney+/Marvel’s WandaVision.

Winslet showed prompt adoration for her competition: “I want to acknowledge my fellow nominees in this decade that has to be about women having each other’s backs. I support you, I salute, I’m proud of all of you.”

“Mare of Easttown felt like it was this scorcherable moment, and it brought people together and gave them something to talk about other than a global pandemic,” said Winslet.

“Brad Ingelsby, this is all you: You created a middle-aged, imperfect, flawed mother and made us all feel validated,” added Winslet.

“All your actors have won stuff,” beamed Winslet to the miniseries director Craig Zobel.

“Not only are you good at acting, turns out you’re great at caring for a whole production,” Nicholson praised Winslet.

Winslet previously won an Emmy for in the Best Actress Miniseries category for HBO’s Mildred Pierce.

Richard “Dick” Evans, who was a staple of 1960s and ’70s television, died on October 2 of cancer, his family announced today. He was 86. In his 40-year career, Evans played opposite Mia Farrow as a series regular on Peyton Place, acted opposite George C. Scott in Islands in the Stream and starred in Jack L. Warner’s final movie, Dirty Little Billy. Showbiz & Media Figures We’ve Lost In 2021 – Photo Gallery And he was ubiquitous on dozens of classic shows such as Star Trek, Gunsmoke, S.W.A.T., Bonanza, The Mod Squad, Quincy ME, The A-Team, Hart to Hart, Gunsmoke and Lou Grant. Acting...
TV SHOWS・1 DAY AGO
Deadline

EXCLUSIVE: Limelight and eOne have set an all-star cast for its upcoming drama Wildflower including Jean Smart, marking her the first film project she has signed on to since winning her Best Actress Emmy. Starring alongside Smart are Kiernan Shipka, Alexandra Daddario, Dash Mihok, Charlie Plummer and Samantha Hyde. Limelight...
MOVIES・15 DAYS AGO
DELCO.Today

A Second Season for Mare? They’re Still Talking About It

Kate Winslet has now won an Emmy Award for Best Actress for her portrayal of Mare Sheehan in ‘Mare of Easttown,’ but she’s not done with the limited HBO series yet, writes Hasan Sheikh for codelist.biz. She’s mentioned a possible second season several times. “It has been talked about, of...
MOVIES・12 DAYS AGO

Marion Cotillard, Jude Law, Josh O’Connor, and Andrea Riseborough have joined Kate Winslet’s upcoming biopic, Lee. Ellen Kuras will be the director for the picture. The script was written by Liz Hannah (The Post, Mindhunter), which has been adapted from the book The Lives of Lee Miller by Antony Penrose. Winslet will produce and star in the biopic based around World War II correspondent Lee Miller. Rocket Science, CAA Media Finance, and UTA Independent Film Group will broker deals at the market. Finola Dwyer, Troy Lum, and Andrew Mason of Hopscotch Features are producing Lee along with Kate Winslet.
MOVIES・6 DAYS AGO
swiowanewssource.com

Kate Winslet has had "conversations" about a potential second season of ‘Mare of Easttown’. The 46-year-old actress - who played detective Mare Sheehan and executive produced the HBO miniseries, which was written by Brad Inglesby - gave an insight into the future of the show, and admitted she doesn't have a "clear answer" about series two just yet.
CELEBRITIES・5 DAYS AGO
Collider

Ellen Kuras has found the core cast to join Kate Winslet in her upcoming film about the life of artist and war photographer Lee Miller. Deadline reports that Jude Law, Marion Cotillard, Josh O’Connor, and Andrea Riseborough have joined the cast of Lee, the story of Man Ray muse Miller who would go on to become a war correspondent for Vogue during World War II, one of a number of women documenting the atrocities of war in the mid-1940s.
MOVIES・6 DAYS AGO
Yardbarker

LEE is taking shape, according to an exclusive reported from Deadline on Thursday:. "In a development that makes for as hot a package as you’ll find at the Virtual American Film Market, Marion Cotillard, Jude Law, Andrea Riseborough and Josh O’Connor will join Kate Winslet in LEE, the Ellen Kuras-directed film about the wartime experiences of Lee Miller. Miller traded a glamorous career as a Vogue cover model and muse to artists like Man Ray for a dangerous career as a WWII photographer who chronicled the fighting on the allied front lines and exposed the atrocities that Hitler’s Nazi Germany perpetrated on Jews in concentration camps."
MOVIES・6 DAYS AGO

Oscar-winner Kate Winslet (“ “) was previously attached to film project based on the life of Vogue cover model turned wartime photojournalist Lee Miller, who helped spotlight the Holocaust atrocities against Jews committed by the Nazis during WWIII that had been hidden away from the front lines in evil concentration camps from the rest of the world.
MOVIES・6 DAYS AGO
AceShowbiz

Strap in, Stephen King fans: more stars are joining the adaptation game. Deadline reports that Mare of Easttown star Joe Tippett has joined the cast of Mr. Harrigan’s Phone, an adaptation of King’s short story of the same name from 2020’s If It Bleeds. Tippett is set to play the father of Craig, the young protagonist played by It’s Jaeden Martell, alongside Donald Sutherland as the film’s titular reclusive billionaire.
MOVIES・2 DAYS AGO
asapland.com

“Avatar 2” is one of the most awaited movies that fans and viewers have been eagerly waiting for with bated breath. The production of the movie has been going on for several long years now. But the filming and production had to come to a halt due to the Coronavirus pandemic that the entire world suffers from.
MOVIES・1 DAY AGO

Before becoming the Duchess of Sussex, Meghan Markle initially rose to prominence through her time in Tinseltown. Starring as Rachel Zane in USA Network's "Suits," the former actor appeared in the show's first seven seasons before uprooting her life for royalty. She has also made appearances in prominent programs such as "90210," "CSI: NY," and "CSI: Miami," along with film appearances in "Get Him to the Greek" and "Horrible Bosses."
CELEBRITIES・15 DAYS AGO
Best Life

Katie Couric's new book, Going There, doesn't hit shelves for three more weeks, but it's already ruffling some feathers and bringing backlash on the longtime news presenter. In excerpts already released from the memoir, Couric comments on some fellow news anchors she's worked with—as well as other celebrities like Prince Harry and Martha Stewart—and a couple of them have already expressed that they're shocked by her words. Asked by the New York Post to respond to what Couric writes about her, former Today host Deborah Norville kept her comment succinct and to the point. Read on to see what Norville had to say and to find out why so many are shocked by the upcoming memoir.
NEW YORK CITY, NY・23 DAYS AGO
Us Weekly

Sitting this one out. Prince Harry and Meghan Markle will not be traveling overseas for an event set to honor Princess Diana later this month, Us Weekly can confirm. The party, hosted by Prince William, was originally set for July when both brothers attended a statue unveiling that paid tribute to their mother. A source tells Us that the Duke and Duchess of Sussex “will not be in attendance” at the private get-together, celebrating donors who helped fund the statue and close friends and family of Diana, including Elton John.
CELEBRITIES・16 DAYS AGO
DoYouRemember?

Ron Howard and his brother Clint have been doing a lot of interviews to promote their new memoir. In the book, they talk about growing up in Hollywood with famous parents and working as child actors themselves. Now, even Ron’s daughter Bryce Dallas Howard is a famous actress. Even though...
CELEBRITIES・19 HOURS AGO