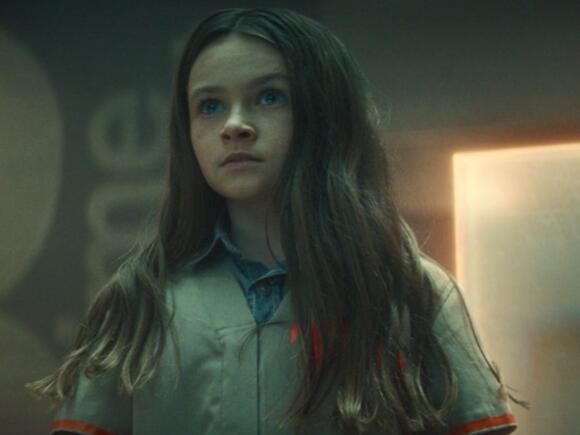 Cailey Fleming's ready to return to the Marvel Cinematic Universe (MCU) as Young Sylvie or in another role.

"I would love to do something with dance in it or obviously something else in the MCU, maybe a new character or keep playing Young Sylvie [in 'Loki']," Fleming told Insider recently when asked what future projects she'd like to work on after "TWD" ends in 2022 .

Fleming appeared as a Loki variant, a young version of Sylvie, on the show's fourth episode.

While in Asgard, she gets swooped up by Gugu Mbatha-Raw's Ravonna Renslayer of the Time Variance Authority.

She's about to face trial for her supposed crimes against the sacred MCU timeline, but, instead, she bites Ravonna, grabs her Tempad (used to travel through time), and escapes into the vast multiverse.

"When I first got the role, I was very, very excited because me and my brother are the biggest Marvel fans. I'm obsessed with the Marvel universe," Fleming said of joining the MCU.

"I was just very, very excited, especially getting to play Young Sylvie," she added. "She's such a fierce and powerful character. I'm really glad that I got to do that and I would definitely love to do something else in the Marvel Cinematic Universe in the future."

Now that the multiverse is a thing, who's to say we can't see Young Sylvie again?

It seems like the possibilities may be endless now that we're seeing multiple variants of Loki, including the much beloved Alligator Loki .

After fighting the undead in the zombie apocalypse, it would be really easy to see Fleming as a member of the Young Avengers, a young superhero group that appears in the Marvel comics.

Members of the superhero group are slowly being introduced to the MCU through various shows and films and even Disneyland's new Spider-Man attraction . Sylvie, as the Enchantress, eventually does wind up a member of the group in the comics.

We'll have to wait and see if Fleming returns to the MCU.

For now, you can catch her on episodes of "TWD," which airs on Sundays on AMC. You can read our longer "TWD" interview with Fleming here and follow our show coverage all season long here .

Following the midseason finale, do you want a good sense of what’s coming on The Walking Dead season 11 episode 9? There’s a lot to be excited about now!. Alas, we are going to be waiting for a while to see the second part of this three-part final season. The show will be back on AMC come Sunday, February 20. There is a lot that you can expect in this particular round of stories, whether it be a deeper dive into the Commonwealth or a chance to see in particular The Boys and The Blacklist actress Laila Robins.
TV SERIES・14 DAYS AGO
insider.com

Marvel's next big superhero movie, "Eternals," is in theaters only on November 5. Ten new character portraits showcase Salma Hayek, Angelina Jolie, Kumail Nanjiani, and more cast. Get to know them before the film's release next month.
MOVIES・14 DAYS AGO
FanSided

The Walking Dead: World Beyond Episode 2 “Foothold” might slow the plot down a bit, but overall, things are just getting started as our heroes begin making plans to end the CRM. It all begins with a minor setback on Iris’s end but little does she know Hope is on the inside and already setting things into motion.
TV SERIES・14 DAYS AGO
/Film

If Kumail Nanjiani getting into the superhero game with Marvel's "Eternals" was a development that nobody saw coming, then the actor quickly turning around and joining the "Star Wars" universe was on a whole other level of surprise — especially considering that it will be for the long-gestating "Obi-Wan" series. Not a bad career trajectory for a Pakistani man in Hollywood, particularly one who first got started doing stand-up comedy work and has now ascended to two of the biggest franchises on Earth right now.
TV & VIDEOS・13 DAYS AGO

If you have AMC+, you can view Fear the Walking Dead’s season seven premiere now. If not, you have to wait until October 17. It has been a minute since that last episode aired, so you might need a bit of a refresher to remind yourself about what happened. The...
TV SERIES・14 DAYS AGO
IGN

This post contains spoilers for The Walking Dead. When it comes to The Walking Dead’s most morally complicated characters, Negan (Jeffrey Dean Morgan) just about takes the cake. Viewers were introduced to him in the season six finale after already dealing with his lackeys for several episodes. In a brutal display of power, Negan bludgeoned members of Rick Grimes’ crew, Abraham and Glenn, to death with a baseball bat, the latter right in front of his wife, Maggie (Lauren Cohan).
TV SERIES・8 DAYS AGO
Popculture

5 Marvel Characters Aubrey Plaza Would Be Perfect To Play

Her tenure with the Parks and Recreation cast and roles in movies like Mike and Dave Need Wedding Dates or Happiest Season might cause someone to assume that Aubrey Plaza is primarily a comedic actress when, in reality, she has done it all. To name a few examples, the 37-year-old is also a Scream Queen (with Life After Beth in 2014 and the 2019 Child’s Play remake), played a villain on Criminal Minds, lent her voice to The Legend of Korra, and starred in a few comic book adaptations - namely 2010’s Scott Pilgrim vs. the World and one fo the most unique Marvel TV shows, FX’s Legion. However, Plaza has not yet broken into the Marvel movies, but if and when she does, we have a few characters in mind for her to play, including one who has a similar cultural background.
MOVIES・9 DAYS AGO

The Walking Dead’s part one mid-season finale was fairly uneventful as far as a mid-season finale goes. It did leave us with some cliffhangers but the promo for part two of season 11 ruined those. One moment that stood out was very brief, and it deserved more time was between Carol and Connie.
TV SERIES・14 DAYS AGO
digitalspy.com

Legacies spoilers follow. Legacies season 4 is premiering today (October 14) in the US, and a big part of the marketing is letting fans know that Hope Mikaelson is going to die. Of course, that isn't the end of her journey by any means. Her life may be ending, but...
TV SERIES・12 DAYS AGO
MovieWeb

Huge SPOILER alert. Do not read any further if you want to be surprised by the first act of Marvel's next big epic. Salma Hayek's Ajak has been suspiciously absent from promotional materials in the lead up to Marvel's Eternals even despite a lengthy delay in release due to the pandemic. With Ajak believed to be the leader of the Eternals, fans assumed the marketing team have simply attempted to draw more focus to the larger star power in the film, most notably Angelina Jolie. This might not be the case though, with rumors of a shock revelation that involves Ajak's unfortunate destiny.
MOVIES・13 DAYS AGO
Inverse

Data is still dead. For those who think that Brent Spiner’s return to Star Trek: Picard Season 2 means that the beloved android will be brought back to life — think again. While in conversation with Inverse about his hilarious new book Fan Fiction, Spiner teased one amazing new detail about who he’s playing this time around. It’s not a spoiler, but this detail does rule out several possibilities, and also, will certainly leave Trek fans with even more questions.
MOVIES・13 DAYS AGO

Stargirl season 2 spoilers follow. Stargirl star Meg DeLacy has confirmed the fate of her character Cindy Burman following the recent season two twist. As viewers will remember, in episode six last month, Cindy gets absorbed into a vortex by Eclipso, leaving her fate uncertain. However, fans will be pleased...
TV SERIES・7 DAYS AGO
Syracuse.com

‘Fear of the Walking Dead’ premieres new season on AMC: How to watch, trailer

“Fear the Walking Dead” Season 7 premieres on AMC on Sunday, Oct. 17, at 9 p.m. ET (6 p.m. PT). You can also watch the show on Philo, Sling and FuboTV. This “Walking Dead” spinoff series is a post-apocalyptic horror series created by Robert Kirkman and Dave Erickson for AMC. “Fear of the Walking Dead” explores the new world brought on post-zombie attacks and how the survivors continue to try to escape the undead.
TV SERIES・8 DAYS AGO
flickeringmyth.com

Hot Toys and Sideshow have unveiled the 1:6 scale Television Masterpiece Series Loki and Sylvie figures which are based on the appearance of Tom Hiddleston and Sophia Di Martino as the characters in the hit Disney+ MCU series Loki; check out the promotional images here and head on over to Sideshow if you’d like to pre-order…
SHOPPING・8 DAYS AGO
ComicBook

The future of the Marvel Cinematic Universe is bright, with a number of different projects in various stages of development. While fans wait to hear news on the official introduction of the X-Men and Deadpool to the MCU, one upcoming film that has found a director is Fantastic Four, with the Spider-Man trilogy director Jon Watts bringing Marvel's First Family to big screens. If it were up to Eternals star Angelina Jolie, she would be the next person to take the reins of an MCU film.
MOVIES・7 DAYS AGO
tvseriesfinale.com