By Kaitlin Thomas
GoldDerby
27 days ago 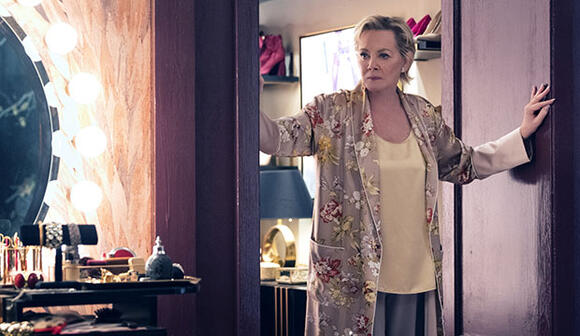 As expected , “Hacks” star Jean Smart took home the Emmy for Best Comedy Actress during Sunday’s 73rd Primetime Emmy Awards. In doing so, the 11-time nominee became just the second person in history to win an Emmy in the comedy lead, supporting and guest categories — and all for different shows. The only other person to complete the trifecta is the legendary Betty White .

On the HBO Max comedy, Smart portrays Deborah Vance, a comedy pioneer with a long-running Vegas show who reluctantly takes a young writer (newcomer and Emmy nominee Hannah Einbinder ) under her wing. It’s an unforgettable and quite possibly career-best performance from Smart, who was also nominated this year for her supporting role as the mother of Kate Winslet ’s titular character on the HBO limited series “Mare of Easttown.”

Previously, Smart — who now has four Emmys to her name — scored back-to-back Best Comedy Guest Actress Emmys in 2000 and 2001 for her work on the long-running sitcom “Frasier.” In 2008, she also took home the award for Best Comedy Supporting Actress for her performance as Regina, the mother of Christina Applegate ’s character, on ABC’s “Samantha Who?”

Meanwhile, White, who has received a total of 21 Primetime Emmy nominations throughout her career, has taken home five. She won her first in 1975 for her supporting role as Sue Ann Nivens on the classic comedy series “The Mary Tyler Moore Show.” She took home the same award the following year. Then, a decade later, she won the Emmy for Best Comedy Actress for her performance as the affable Rose Nylund on “The Golden Girls.” In 1996, she triumphed in the comedy guest actress category for playing herself on “The John Larroquette Show.” Finally, in 2010, White took home another Emmy in the same category for hosting “Saturday Night Live” at the ripe old age of 88.

With her triumph over fellow nominees Kaley Cuoco (“The Flight Attendant”), Tracee Ellis Ross (“Black-ish”), Allison Janney (“Mom”) and Aidy Bryant (“Shill”), Smart has joined White in the history books. Not even Cloris Leachman and Julia Louis-Dreyfus , who are tied as the most decorated performers with eight Emmys apiece, have the full comedy collection (the former never won in lead and the latter is missing a guest trophy).

Hopefully this win will take some of the sting out of the fact Smart went home empty-handed the last two times she was nominated and predicted to win . Both losses occurred in the Best Limited/TV Movie Supporting Actress race, where she was nominated for “Fargo” in 2016 and “Watchmen” in 2020.

PREDICT the 2022 Oscar nominees and other awards shows

“Golden Girls” star Betty White is a television legend. And she is a comedy icon. Her decades of excellent work in front of the camera might make you assume that the now 99-year-old spent years studying acting and comedy. Well, according to an early 2021 report by Insider, that assumption...
CELEBRITIES・11 DAYS AGO
Page Six

Betty White is three months away from turning 100, and fans will do anything to keep America’s sweetheart safe — including demanding security. The 99-year-old actress’ birthday is fast approaching in January, and after last year’s scare when she trended on Twitter and everyone thought she had passed, they’re desperate to ensure her safety.
CELEBRITIES・3 DAYS AGO
The Hollywood Reporter

Hacks costars Jean Smart and Hannah Einbinder's matching tuxedo moment was most definitely intentional. When Smart, 70, and Einbinder, 26, hit the 2021 Women in Film Honors red carpet at the Academy Museum of Motion Pictures in Los Angeles on Wednesday, the actresses posed side by side modeling identical Max Mara pantsuits perfectly tailored to each of their figures. Both women accessorized with drop earrings, but they differed when it came to the rest of their accessories.
LOS ANGELES, CA・10 DAYS AGO

Alexandra Daddario Is Returning To The Movies Opposite Jean Smart, And Sign Me Up

Baywatch and Percy Jackson and the Olympians actress Alexandra Daddario was part of one of the most entertaining summer binges when she starred alongside Jennifer Coolidge and Connie Britton in HBO’s The White Lotus. Now that the limited series has concluded, what’s the 35-year-old up to next? Well, she’s set to star in a coming-of-age movie with Jean Smart that's named after another blooming plant.
MOVIES・4 DAYS AGO
GoldDerby

S to the AG: The ‘Succession’ cast looks good to finally get their first nominations (and wins?) from their fellow actors

The Roys are coming for the Screen Actors Guild. “Succession,” the popular HBO drama about the inner workings of a wealthy, dysfunctional family that owns and operates a major media conglomerate, is the current favorite to win the TV drama ensemble honor at the 28th Annual Screen Actors Guild Awards, which will be held in February. The show sits in first place in Gold Derby’s combined odds, which is surprising only because the guild has yet to acknowledge the show even exists. Created by Jesse Armstrong, “Succession” was lauded by critics in its first season but really started to break out...
MOVIES・2 DAYS AGO
My Clallam County

Betty White is arguably one of Hollywood’s most beloved stars, and now, with her 100th birthday fast approaching, one fan’s plea to make sure Betty gets there has gone viral. The Twitter user known as Heyoka’s heartfelt plea reads, “Betty White is…3 months away from 100; please provide her with...
CELEBRITIES・3 DAYS AGO
Herald Times

Fresh off an Emmy Award nomination, Hannah Einbinder plans to make her Bloomington debut in a series of shows at The Comedy Attic this weekend. The comedian now stars in HBO Max's "Hacks," but before she's set to film Season 2, Einbinder wanted to return to her first love in comedy: stand-up.
BLOOMINGTON, IN・5 DAYS AGO

All products featured on Glamour are independently selected by our editors. However, when you buy something through our retail links, we may earn an affiliate commission. Tracee Ellis Ross is the latest celebrity to participate in the fall's latest style trend: oversized jackets and [checks notes] no pants. Despite the traditionally cooler weather, the look has been making the rounds this season to great effect. Hailey Bieber and Beyoncé have both leaned into the trend in the past few weeks, from Bieber's signature street style to Beyoncé's elegant evening wear.
NEW YORK CITY, NY・2 DAYS AGO
digitalspy.com

Veep and Marvel star Julie Louis-Dreyfus has joined the cast of Eddie Murphy's new Netflix movie, it has been reported. As stated in The Hollywood Reporter, the actress has been cast in the current untitled comedy project as the mother of Jonah Hill, who was previously announced. The movie, directed...
MOVIES・14 DAYS AGO
womenandhollywood.com

Book Excerpt: “How to Be Golden: Lessons We Can Learn from Betty White”

The following is adapted from Paula Bernstein’s “How to Be Golden: Lessons We Can Learn from Betty White,” which will be available October 5. Reprinted by permission of Running Press, part of the Perseus division of Hachette Book Group. Copyright 2021 Paula Bernstein. As a child growing up in the...
BOOKS & LITERATURE・13 DAYS AGO

The Best Supporting Actress awards were first handed out at the 9th Academy Awards ceremony held in 1937, and in the nearly 85 years since, 83 women have received this honor. Only two have won multiple Oscars in this category: Dianne Wiest (“Hannah and Her Sisters,” 1987 and “Bullets Over Broadway,” 1995) and Shelley Winters (“The Diary of Anne Frank,” 1959 and “A Patch of Blue,” 1966). The great character actress Thelma Ritter holds the record number of nominations in this category with six, sadly without a win, while Amy Adams has had five bids in supporting (one in lead),...
CELEBRITIES・1 DAY AGO
HollywoodLife

Will the real Angelyne stand up? Emmy Rossum looks unrecognizable as the Hollywood billboard icon while on set of her limited series. Emmy Rossum’s transformation into Los Angeles icon Angelyne is the stuff of Hollywood magic. The former Shameless star, 35, will assume the role of the legendary media personality, 71, in the upcoming Peacock limited series Angelyne. While filming at a Denny’s in Hollywood on October 6, Emmy could be seen in a blonde wig and a velvet pink mini dress, covered up with a feather jacket.
LOS ANGELES, CA・11 DAYS AGO
atchisonglobenow.com

Jake Gyllenhaal fancied Jennifer Aniston so much it was "torture" doing love scenes with the actress. The pair starred together in 2002 film 'The Good Girl' and the 40-year-old star says it wasn't easy because of his real life crush on the 52-year-old 'Friends' actress. Speaking during an interview with...
CELEBRITIES・12 DAYS AGO
People

Angelina Jolie and her daughter Zahara had a mother-daughter night out at an event celebrating female change-makers. The Eternals actress, 46, wore a billowing brown gown as she stood by 16-year-old Zahara, who went with an all-white look in a sweater, pants, oversized belt and sneakers at Variety's Power of Women event in Beverly Hills Thursday night.
CELEBRITIES・16 DAYS AGO
HollywoodLife

The ‘No Time To Die’ premiere was a family outing for Jason Momoa, who brought along his son, Nakoa-Wolf, and his daughter, Lola, to the star-studded event. Jason Momoa, 42, was accompanied by two very special guests at the No Time to Die premiere in London on Tuesday, September 28. Their names? Lola and Nakoa-Wolf, Jason’s adorable two children that he proudly posed for photos with on the red carpet to celebrate the latest installment of the James Bond film franchise at the Royal Albert House. The Aquaman star looked dapper in a black and white suit and bowtie as he wrapped both his arms around 14-year-old Lola and 12-year-old Nakoa-Wolf, who also both dressed to impress for the event.
CELEBRITIES・18 DAYS AGO
nickiswift.com

Before becoming the Duchess of Sussex, Meghan Markle initially rose to prominence through her time in Tinseltown. Starring as Rachel Zane in USA Network's "Suits," the former actor appeared in the show's first seven seasons before uprooting her life for royalty. She has also made appearances in prominent programs such as "90210," "CSI: NY," and "CSI: Miami," along with film appearances in "Get Him to the Greek" and "Horrible Bosses."
CELEBRITIES・5 DAYS AGO
CinemaBlend

Another day, another Grey’s Anatomy rumor. Thanks to the new tell-all book, How to Save a Life: The Inside Story of Grey’s Anatomy, tea is getting spilled every which way regarding the long-running ABC medical drama. Following reports about Patrick Dempsey and Katherine Heigl, fans can now chew on what is supposedly the "real" reason why Jerrika Hinton departed from Grey’s Anatomy as Dr. Stephanie Edwards after just five years. And would it surprise anyone to know it allegedly had something to do with Ellen Pompeo?
TV SERIES・20 DAYS AGO