By Shannon Dawson
MadameNoire
26 days ago 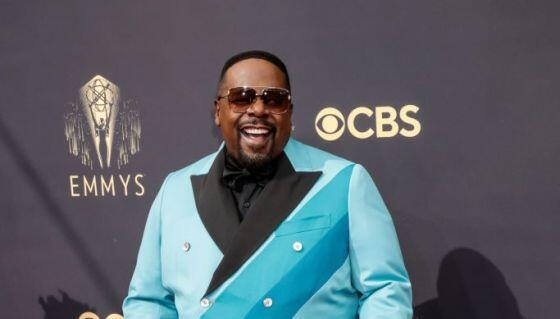 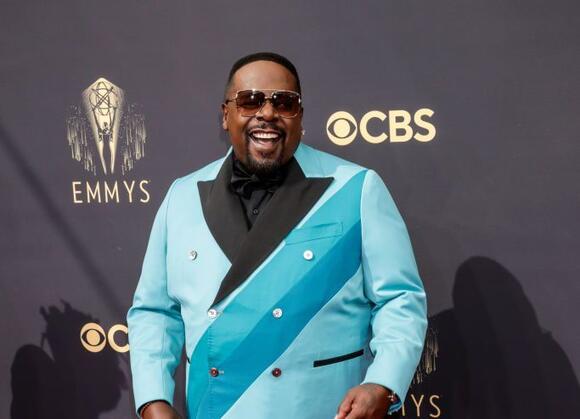 Cedric the Entertainer opened up this year’s Emmy Awards in an unexpected way. The 57-year-old took to the stage at the Microsoft Theater in Los Angeles and performed a musical tribute in honor of the late Biz Markie who passed away in July.

The three entertainers put a twist on the original song’s lyrics singing, “TV, you got what I need!” as the star-studded audience joined them in unison.

Before the start of the show, Cedric, who dazzled on the red carpet in a stylish two-tone blue suit jacket and matching pants, spoke about his excitement for hosting the annual awards show.

“Since I was a little boy huddled up next to my grandmother, television has always been my reliable friend, so it is an enormous honor for me to host this year’s Emmy Awards,” he shared with E-News .

“Throughout the rollercoaster of a year that we have all lived through, television has helped us stay connected as a society like never before. It not only entertained us, but as it always has, it helped to open our eyes, educate us, and hopefully brought about a better understanding of who we are as a people. I can’t wait to take the stage to celebrate all of the great shows and performances that made us laugh, cry, dance and sing over the past year.”

While the comedian is known for his infamously funny no holds bar comedy style, Cedric told the Hollywood Report er last week that he wanted to be careful about not “crossing the line” with some of his material .

“It’s not bad if you’re the news for a couple of days, but you don’t want to be the guy that ruins the night or someone’s moment,” he explained.

“At the same time, you’ve got to be yourself. As comedians, we’re up on a tightrope trying to make sure people are entertained,” he continued. “But, again, we’re living in a hypersensitive society. You don’t know where that line is sometimes. It moves from day to day.”

Are Steve Harvey And Cedric The Entertainer Friends?

Urban television was booming back in the day. From the 1990s onward, viewers had absolute bangers of shows featuring Black talent dominating the airwaves. With shows like "The Wayans Bros.," "The Parkers," and "Martin," network television boasted a plethora of iconic and culture-defining programming way back when. Another landmark television program (and one that unfortunately gets left out of the conversation more often than not) was The WB's (remember that channel?!) "The Steve Harvey Show."
CELEBRITIES・11 DAYS AGO
Atlanta Daily World

The 2021 BET Hip Hop Awards took place on Tuesday night, honoring some of the genre’s greatest artists, both past and present. Hip Hop’s big show celebrated the life and influential career of Biz Markie, who passed away on July 16 2021 at 57-years old. Biz is known as the eclectic artist behind the cultural hit “Just a Friend” and one of the original voices of the New York City rap scene.
HIP HOP・10 DAYS AGO
NME

Beyoncé and Jay-Z made a rare public appearance together at the premiere of The Harder They Fall at BFI’s London Film Festival. The singer posted pictures with her rapper husband in the back of a car on Instagram, along with shots from the red carpet at the event. The pair...
MOVIES・9 DAYS AGO
Deadline

EXCLUSIVE: Paradigm has signed Filipino American actor Kian Talan. Talan currently appears in the CBS series NCIS: Hawai’i which follows the life of Special Agent in Charge of NCIS Pearl Harbor, Jane Tennant (Vanessa Lachey). He portrays Jane’s eldest son Alex, a moody and exasperating teen who is struggling to cope with his parents’ split and father’s new family. He previously appeared in the educational series produced by Pharrell Williams titled Brainchild, and the critically acclaimed short film from HBO Max, Shadows. Talan is an advocate for Asian American representation in Hollywood and supports various initiatives including Search to Involve Filipino Americans’ (SIPA) Los Angeles Chapter and Filipino American Charity Trust (FACT) out of New Hampshire, the latter of which played a role in his understanding of the misrepresentation around him as a child. As his career continues to grow, he hopes to represent stories he never saw growing up and pushing the story forward for Asian Americans. He will continue to be represented by Corner Booth Entertainment alongside Paradigm.
MOVIES・1 DAY AGO

Sarah Jessica Parker has paid a heartfelt tribute to her late friend and colleague following his devastating death. The Sex and the City star said she was "utterly devastated" as she revealed the passing of George Malkemus, the co-founder of SJP Shoes. The actress wrote: "George D.Malkemus lll. February 23rd,...
CELEBRITIES・27 DAYS AGO
People

So many stars look forward to the day when they land their first Met Gala invite. But Lourdes Leon admits that the star-studded bash wasn't as fun as she expected. Madonna's 24-year-old daughter Leon made her Met Gala debut (with her unshaven armpit visible!) last month but in a new Interview Magazine cover story, she said the party itself just wasn't her "vibe."
CELEBRITIES・1 DAY AGO
HOT 97

Chloe Bailey delivered a show-stopping performance during the MTV VMAs. This performance was Chloe’s first solo without her sister, Halle, and it’s safe to say she killed it. Chloe’s performance of her new single “Have Mercy” was a fan favorite of the night, as she was trending on Twitter following the show.
CELEBRITIES・26 DAYS AGO
MadameNoire

Cardi and Meg also snagged two more awards for "WAP" including one for "Song of the Year" and another for "Best Collaboration."
HIP HOP・9 DAYS AGO

Labelle lost its co-founder, Sarah Dash, after the legendary singer died at the age of 76. Dash's friend and Labelle's co-founder, Patti Labelle, confirmed the tragic news in a statement. According to the 77-year-old singer, she was still able to spend one last performance with Dash on Saturday prior to...
CELEBRITIES・25 DAYS AGO
SheKnows

Paris is without question the ideal city for memorable fashion looks and trying new trends. The Fashion Capital of the World is home to designer shops, boutiques galore, and of course several fashion shows and celebrations throughout the year. At the recent 100 years of Vogue Paris Celebration, Michael Jackson’s eldest child, daughter Paris Jackson, was spotted looking like total pop star royalty in her gorgeous garb, and we loved every bit of it.
BEAUTY & FASHION・14 DAYS AGO
thefocus.news

Pink Floyd co-founder Roger Waters has announced his marriage to fifth wife Kamilah Chavis on Instagram – what do we know about his new leading lady?. It’s never too late to find the love of your life, and Roger Waters has proved it. The 78-year-old former Pink Floyd singer and...
BEAUTY & FASHION・2 DAYS AGO
Page Six

Alana Thomspon, also known as “Honey Boo Boo,” has finally gone Instagram-official with her boyfriend, Dralin Carswell, after six months of dating. “🎃🎃 spooky season 🎃🎃,” the reality star, 16, captioned a photo of herself and her 20-year-old beau at a pumpkin patch on Monday. The “Mama June: From Not...
CELEBRITIES・17 DAYS AGO

R&B Singer Emani 22 Dead at 22: She 'Brightened up Any Room She Was in,' Producer J Maine Says

Emani 22, an R&B singer known for songs including "Feelings" and "Close," has died. She was 22. Emani died on Monday following a "tragic accident," her manager tells PEOPLE. "It is with heavy hearts that the family of Emani has confirmed her passing," a statement provided to PEOPLE reads. "They would like to share that although she fought courageously and the medical team went above and beyond doing everything in their power to aid in her recovery, on Monday, October 11th, Emani succumbed to the injuries she sustained after a tragic accident. At this time, Emani's family is asking for privacy to mourn and honor her life and memories."
MUSIC・1 DAY AGO
Insider

Cannon shared the story in an exclusive clip of his new daytime show, "Nick Cannon," which airs for the first time on Monday.
CELEBRITIES・8 DAYS AGO
E! News

Watch: Tom Cruise & Nicole Kidman's Son Connor's Rare IG Post. Over the weekend, Tom Cruise inadvertently found himself on the big screen. Not the big screen that's usually in theaters—but rather the Jumbotron at Oracle Park. On Saturday, October 9, the Top Gun star, 59, and his son, Connor Cruise, 26, were in attendance to watch the San Francisco Giants go up against the Los Angeles Dodgers in Game 2 of the National League Division Series.
BASEBALL・5 DAYS AGO
HelloBeautiful

Jay Z and Kelly Rowland reconnected like old friends at "The Harder They Fall" premiere and Twitter is in their feelings over how pure the moment was!
CELEBRITIES・1 DAY AGO
Black Enterprise

Damn, Gina Not Playing! Tisha Campbell Slams T-Shirt Company For Unauthorized Use of Her Likeness

Veteran actress Tisha Campbell is calling a company to task for selling Martin and House Party branded merchandise featuring her face without her or the permission of the movie and long-running sitcom. If you’re one of Campbell’s two million Instagram followers, you know she often shares candid moments captured on...
BEAUTY & FASHION・2 DAYS AGO
extratv

Rob Kardashian just made a rare appearance on Instagram!. On Monday, his sister Kim Kardashian shared a few photos from a family dinner that included Rob, who looked happy and healthy. The first pic featured Kourtney Kardashian with her beau Travis Barker, and the second showed siblings Khloé Kardashian and...
CELEBRITIES・10 DAYS AGO
HollywoodLife

Britney Spears’ boys are all grown up! The pop stars’ teen sons were all smiles as they made a rare social media appearance. Check out the photos here!. Britney Spears‘ sons, Sean Preston Federline, 16, and Jayden James Federline, 15, who mostly stay out of the public eye, made an appearance on social media on Tuesday, October 5, wearing the biggest grins as they posed for some photos. The boys, who Britney shares with ex-husband Kevin Federline, 43, appeared all grown up as they smiled for the camera with Kevin’s friend, CEO of Movision Entertainment, Eddie Morales.
CALABASAS, CA・9 DAYS AGO
E! News

Watch: Nicki Minaj Is in "Twitter Jail" After Controversial Tweets. Forget about "Barbie Dreams." Nicki Minaj is all about Kung Fu Panda, at least when it comes to throwing her son the cutest party for his first birthday. The 38-year-old rapper, who welcomed her little one with husband Kenneth Petty last September, went above and beyond to celebrate her baby boy's milestone.
CELEBRITIES・10 DAYS AGO