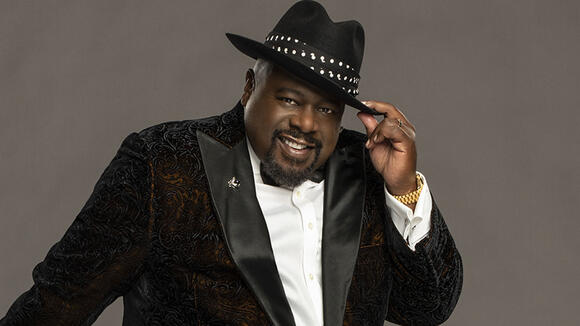 As host of the 2021 Emmy Awards , actor and stand-up comedian Cedric the Entertainer kicked off Sunday’s event by leading the audience in a cover of Biz Markie’s “Just a Friend” with the chorus, “TV, you’ve got what I need.”

Markie, who was dubbed the “Clown prince of hip hop,” died in July this year, at the age of 57. The performance was a lively tribute to the legendary rapper. “RIP Biz Markie,” Cedric the Entertainer said at the end of the number, which included participation from LL Cool J, Rita Wilson and many others.

The lyrics included phrases like, “Sick of the quarantining,” as audience members were shown dancing and singing along.

The 57-year-old comic, whose real name is Cedric Kyles, shared that he wanted to host the show for a personal reason. “It gives me a chance to thank TV for all it has meant to me.” He said that his favorite TV memory is sitting with his grandmother, watching shows together.

“It’s the Emmys people!” he later said, before introducing Reggie Watts who served as DJ for the evening.

In his host monologue, which occurred after a few awards had been announced, Cedric the Entertainer declared “It feels good, we’re all vaxxed.” Speaking about having to be vaccinated for the show, he said, “I did not have a reaction like Nicki Minaj’s cousin’s friend, okay. I got Pfizer, you know what I’m saying? Because I’m bougie.”

Noting how everyone was looking their best and with so many well-known faces in the auditorium, he said: “Lock the doors, we’re not leaving till we find a new host for Jeopardy! ”

“It’s a celebration here tonight,” he continued. “What I like about this awards show is everyone is dressed like regular rich folks.” He later quipped, “Billy Porter, y’all know he’s gonna come with it.”

Striking a serious note, Cedric the Entertainer said: “This is a big job, it comes with a lot of pressure, being Black, hosting a job like this.” He noted that a lot of Black people are nominated, going on to shout out Anthony Anderson, in particular.

He mentioned The Crown , which is nominated multiple times. “As great as The Crown is, it pales in comparison to the real monarchy,” he joked. On Meghan Markle’s “hold” on Prince Harry, Cedric quipped: “He renounced his throne quicker than Eddie Murphy did in Coming to America .”

Cedric the Entertainer is known to many for co-starring in The Steve Harvey Show and has appeared in numerous films from Barbershop to Johnson Family Vacation and Lemony Snicket’s A Series of Unfortunate Events . He is currently starring in CBS sitcom The Neighborhood .

The Emmy opener continued into the main program, in which Netflix’s The Crown and Disney+’s The Mandalorian lead the night’s nominees with 24 nods each.

The event was broadcast live on CBS and Paramount+, and included for the first time an ADA-compliant ramp designed for disabled members of the entertainment industry to access the Emmys stage.

“It is great to be back here at Saturday Night Live, and it is even greater to be hosting the show for my first and very last time,” joked Jason Sudeikis at the beginning of his monologue. “Now for those of you who don’t know, I worked at SNL for 10 years, an ‘actors dozen,’ we say. And its so neat to be a small part of this show’s amazing history: a history that was fueled for its first 25 years by cocaine and adrenaline, the next 15 years by Starbucks and unhealthy comparisons. And the last six years by…Adderall and...
TV & VIDEOS・11 HOURS AGO
The Hollywood Reporter

George Lopez is making his way back to broadcast television. The comedian and actor will star in and executive produce a comedy called Lopez vs. Lopez, which has received a formal pilot order at NBC. The network gave the project from Universal Television a put pilot commitment in June; it’s likely to be a contender for NBC’s 2022-23 schedule. The potential series will be a family affair: Lopez’s daughter, Mayan Lopez, will also star and serve as a producer. Debby Wolfe (The Conners, One Day at a Time) is writing the pilot, with The Conners showrunner Bruce Helford supervising. Helford co-created Lopez’s eponymous...
CELEBRITIES・1 DAY AGO
The Hollywood Reporter

Peter Scolari, who starred opposite lifelong friend Tom Hanks in the early 1980s sitcom Bosom Buddies, died Friday. He was 66. Scolari, an Emmy winner whose credits also included Newhart and HBO’s Girls, had been living with cancer for the past two years. A native of New Rochelle, New York, Scolari landed his first major acting role in the short-lived 1980 ABC comedy Goodtime Girls. Later that year, he and a then-unknown Hanks starred in Bosom Buddies, playing two guys who disguise themselves as women to live in an affordable, all-female apartment building. The show, also on ABC, lasted just two seasons, but...
CELEBRITIES・1 DAY AGO
The Ringer

Cedric the Entertainer on His Comedy Career, ‘The Neighborhood,’ and Dave Chappelle

Bakari is joined by comedian Cedric the Entertainer to talk about his career and working on Kings of Comedy (1:00), his work on the sitcom The Neighborhood (10:37), and his thoughts on the controversy around Dave Chappelle’s latest special (21:37). Host: Bakari Sellers. Guest: Cedric the Entertainer. Executive Producer: Jarrod...
CELEBRITIES・3 DAYS AGO

Leni Klum accompanied her dad, Seal, on the red carpet in a rare family outing. The 17-year-old aspiring model walked the red carpet with the musician, 58, for the premiere of the film "The Harder They Fall." The film was written and directed by Seal's (real name Henry Olusegun Adeola Samuel) brother, Jeymes Samuel.
CELEBRITIES・9 DAYS AGO
WWD

Click here to read the full article. If anyone is having a big year for style, it’s Megan Fox. From her naked Mugler dress at the MTV VMAs to her scorching red cutout Peter Dundas gown at the Met Gala to her bright pink, Barbie-inspired Mach & Mach jumpsuit at the iHeartRadio Music Awards, the actress has elevated her red carpet and street style again and again.More from WWDHalloween 2021 Pop Culture-inspired CostumesPhotos of the Best Men's Fashion at the 2021 EmmysBackstage at David Koma Spring 2022 In the last few months, Fox’s outfits have caused constant frenzies on the internet, with...
CELEBRITIES・9 DAYS AGO
nickiswift.com

Before becoming the Duchess of Sussex, Meghan Markle initially rose to prominence through her time in Tinseltown. Starring as Rachel Zane in USA Network's "Suits," the former actor appeared in the show's first seven seasons before uprooting her life for royalty. She has also made appearances in prominent programs such as "90210," "CSI: NY," and "CSI: Miami," along with film appearances in "Get Him to the Greek" and "Horrible Bosses."
CELEBRITIES・12 DAYS AGO
HollywoodLife

The ‘No Time To Die’ premiere was a family outing for Jason Momoa, who brought along his son, Nakoa-Wolf, and his daughter, Lola, to the star-studded event. Jason Momoa, 42, was accompanied by two very special guests at the No Time to Die premiere in London on Tuesday, September 28. Their names? Lola and Nakoa-Wolf, Jason’s adorable two children that he proudly posed for photos with on the red carpet to celebrate the latest installment of the James Bond film franchise at the Royal Albert House. The Aquaman star looked dapper in a black and white suit and bowtie as he wrapped both his arms around 14-year-old Lola and 12-year-old Nakoa-Wolf, who also both dressed to impress for the event.
CELEBRITIES・25 DAYS AGO

Their longstanding friendship has often caused Bow Wow and Angela Simmons to face romance rumors, but the pair have insisted that there is nothing more than a platonic relationship between them. However, back when they were young teenagers, Bow and Angela were an item, but like many in their youth, their love did not last.
CELEBRITIES・5 DAYS AGO
Popculture

Nia Long was a star on the rise when she appeared in the hit NBC series The Fresh Prince of Bel-Air and now she has something to say to the star of the show, Will Smith. PopCulture.com recently caught up with Long who was asked about her time on the show and watching the reunion special, which aired on HBO Max in November 2020.
CELEBRITIES・1 DAY AGO
The Hollywood Gossip

You know the saying about how the best things come to those who wait?. Well, Meri Brown is here with an important variation. She believes nothing good ever comes to those who sit around and wait to find out what might come next, as opposed to appreciating all they already possess.
CELEBRITIES・3 DAYS AGO
Hello Magazine

Celine Dion left fans heartbroken as she announced a devastating health update that ultimately led to some very sad news. The singer shared a statement on her Instagram where she revealed that due to unfortunate developments in her health, the opening of her new Las Vegas residency would be delayed.
CELEBRITIES・5 DAYS AGO

We are quite sure that Serena's husband, Alexis Ohanian, could not keep his eyes off his fabulous wife in this body-hugging dress.
TENNIS・2 DAYS AGO
HelloBeautiful

Megan, kindly remove your foot from our necks.
APPAREL・18 DAYS AGO
Bossip

After a messy back-and-forth over a child’s paternity, the courts have declared that Bow Wow is indeed the father. Bow Wow wasn’t always opposed to having another child. In September 2020, it was the rapper himself who suggested that he was a father for the second time, and it was later revealed that the mother of the child was a model named Olivia Sky.
CELEBRITIES・1 DAY AGO
wmleader.com

Blake Lively is a famous actress, someone who’s chosen to live her life in public, but her kids have not. And the Gossip Girl actress makes a point to maintain the privacy of her three children, who she shares with Deadpool star Ryan Reynolds. Lively reiterated that stance when she...
CELEBRITIES・2 DAYS AGO
kiss951.com

Kelly Clarkson caused a stir when she posted a picture of herself via Instagram on the set of The Voice in a short black dress with a big silver zipper. Fans immediately started to comment on her look. Most fans said she looked “beautiful” and called her “gorgeous,” but one...
CELEBRITIES・3 DAYS AGO
thezoereport.com

Lizzo creates the most playful and bright ensembles. You can always find a fabulous new quirky bag in her outfits, whether it be a crystal-encrusted chocolate bar clutch or an artsy-designed shoulder bag. She also adores an eye-catching dress, like the sheer purple number she wore to Cardi B’s birthday. However, for a recent dinner outing, the singer left behind her usual statement bags and flashy dresses for a more flirty and delicate look. The two-toned number felt more subdued and showed a completely different side to Lizzo’s style choices.
BEVERLY HILLS, CA・8 DAYS AGO
HollywoodLife

Idris Elba’s wife, Sabrina, stole the show in a sheer dress at the ‘No Time To Die’ premiere after-party on Sept. 28. Idris Elba, 49, and his wife Sabrina, 32, looked amazing when they attended the after-party for the premiere of the new Bond film, No Time To Die, in London on September 28. The after-party was held at Annabel’s and Sabrina looked absolutely stunning when she rocked a skintight sheer black midi dress.
CELEBRITIES・24 DAYS AGO
iHeartRadio

Adele Reveals The Reason Behind Her Divorce From Simon Konecki

The pop titan kicked off her comeback with duel cover stories for 'Vogue' U.S. and U.K.
CELEBRITIES・16 DAYS AGO