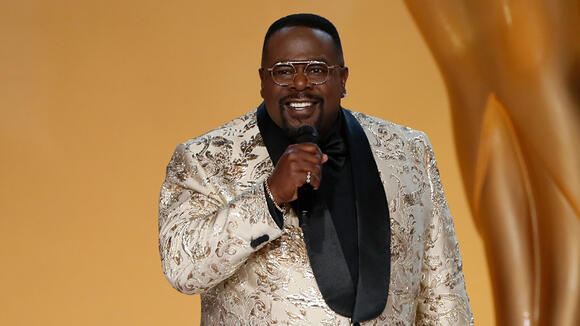 Cedric the Entertainer kicked off the 73rd Emmy Awards on CBS Sunday night with a musical number that parodied the Biz Markie hit “Just a Friend.”

Cedric started off the song, which changed the lyrics of the beloved rap song to more TV-themed content. He was quickly joined by a number of other stars, including rapper and “NCIS: LA” star LL Cool J, rapper and “Dave” co-creator and star Dave “Lil Dicky” Burd, and Rita Wilson.

Multiple audience members got in on the fun as well, including Anthony Anderson and Tracee Ellis-Ross, Billy Porter, and Mj Rodriguez.

The tribute to Markie came after the rapper died in July at age 57 . It was reported at the time that Markie had been suffering complications from diabetes at the time of his death.

Cedric then rejoined the crowd a little while later in the broadcast to do his monologue, joking about the COVID vaccination requirements for attendees.

“We had to get vaxed to come here,” he said. “I did not have a reaction like Nicki Minaj’s cousin…I got Pfizer, that’s the Neiman Marcus of vaccines. Moderna is Macy’s. And Johnson & Johnson is TJ Maxx.”

Cedric later joked that there is a lot of pressure on him as a Black man hosting such a major awards show. He said that Black people “think I can give an award to anyone.”

“‘You gotta give an award to Martin Lawrence, man,'” he said. “‘And you gotta give one to Shanaynay.'” Cedric was quick to clarify that Lawrence and Shanaynay were in fact the same person.

All products and services featured by Variety are independently selected by Variety editors. However, Variety may receive a commission on orders placed through its retail links, and the retailer may receive certain auditable data for accounting purposes. Some people’s lives are so extraordinary it would feel remiss not to memorialize their stories on the page. When it has a real-life Hollywood ending, even better. Some of the most captivating celebrity memoirs have been published in the last couple of years, with many making their way to the top of dozens of best-seller lists. The latest to join the ranks is Billy Porter’s...
BOOKS & LITERATURE・2 DAYS AGO
Variety

Colleen Fitzpatrick has a knack for knowing what you need to hear at any particular point in time, and she knows how to put it in front of you. As the Netflix executive responsible for music creative production, spectacle and events, much of the music on the streamer’s series passed through her hands — or ears. In fact, in all likelihood, you’ve crossed paths with Fitzpatrick — under her stage name Vitamin C, who saw multiple hits in the 1990s, including end-of-high-school staple “Graduation (Friends Forever),” and her reggae-tinged Top 20 smash, “Smile.”  She’s also a former actor, whose appearance as...
MUSIC・2 DAYS AGO
Variety

Variety's Awards Circuit is home to the official predictions for the upcoming Oscars and Emmys ceremonies from film awards editor Clayton Davis. Following history, buzz, news, reviews and sources, the Oscar and Emmy predictions are updated regularly with the current year's list of contenders in all categories. Variety's Awards Circuit Prediction schedule consists of four phases, running all year long: Draft, Pre-Season, Regular Season and Post Season. The eligibility calendar and dates of awards will determine how long each phase lasts and is subject to change. To see all the latest predictions, of all the categories, in one place, visit THE...
CELEBRITIES・1 DAY AGO
BET

4 Facts About The Biz Markie And Big Daddy Kane Friendship

Hip hop and the world of music lost a titan when Biz Markie passed earlier this year. The New York rapper transcended through the ranks of the underground as a member of the Juice Crew and established himself as one of the most innovative and unique talents in hip hop history. His beat-boxing, annimated persona and off-key-singing brought an element to the genre that opened the doors for many after.
MUSIC・13 DAYS AGO

My apologies to Cara Delevigne. She may be losing her title of “best brows” to Melissa Collazo. I don’t think I’ve seen a more spectacular pair. (The shape! The fluffiness!) So of course, I make my admiration known to the actress mere seconds into introductions by blurting out, “You have amazing brows!” She laughs and graciously credits her mother for never letting her touch them. Collazo is serving major beauty inspo on our call, and I’m not just captivated by her defining facial feature and effortless no-makeup makeup look. The way she pulls off a severe bob with curtain bangs is certainly worth noting, too. It’s one of the season’s biggest hair trends, I should add. While her brows are all genetics, the cut, she tells me, is all thanks to her current project, the addicting new show One of Us Is Lying.
LOS ANGELES, CA・10 DAYS AGO
Variety

Beyonce has been keeping a low musical profile over the past few months, but she’s breaking cover with a new song, “Be Alive,” featured in the new trailer for “King Richard,” the Will Smith-starring biopic on the rise of tennis superstars Venus and Serena Williams from the perspective of their father, Richard (played by Smith). The song, which plays throughout the second half of the trailer, is an orchestra-laden anthem, with a powerful vocal by Beyonce. “It feels so good to be alive, that’s why I live my life with pride,” backing singers intone while Beyonce soars over the music —...
MUSIC・21 HOURS AGO
Variety

Rapper-entrepreneur A$AP Ferg has joined the management roster at Jay-Z’s Roc Nation. The Harlem-born member of the hip-hop collective A$AP Mob — who will go by just Ferg for his non-A$AP efforts — has been in the studio over the past couple of months, and fans can expect a new song from him produced by the Neptunes (Pharrell Williams and Chad Hugo) on October 29th. Ferg remains signed to A$AP Worldwide/ Polo Grounds Music/ RCA Records. “It has always been a dream to work with Jay-Z,” Ferg says. “For decades I have looked up to the moves he’s made with his...
MUSIC・1 DAY AGO
Variety

Newcomer Jamila C. Gray to Star in ‘On the Come Up,’ Directed by Sanaa Lathan (EXCLUSIVE)

Paramount Players has hired newcomer Jamila C. Gray to star in “On the Come Up,” the upcoming film adaptation of Angie Thomas’ New York Times bestselling follow-up book to “The Hate U Give.” Leading an all-Black cast, Gray stars in the Paramount Players movie as Bri, a 16-year-old who wants to become one of the greatest rappers of all time — or, as the film’s longline says, “at least win her first rap battle.” The coming-of-age story follows Bri’s fight to rise to the top, despite the cards being stacked against her. “It’s hard to get your come up when you’re mislabeled...
MOVIES・20 HOURS AGO

Grammy-nominated singer-songwriter Jhené Aiko has signed an exclusive co-publishing deal with Warner Chappell Music publishing, the company announced today. Her six Grammy nods include a 2021 one for her most recent album, the platinum-selling “Chilombo”; over the years she has collaborated with Drake, Childish Gambino, John Legend, Summer Walker, Big Sean, Saweetie and others. Aiko — pictured above with Warner Chappell president of A&R Ryan Press — said: “I’ve known Ryan Press for a long time now and have so much love and respect for the work they’re doing at Warner Chappell. They treat their songwriters like family, and it’s great to...
MUSIC・18 HOURS AGO
Variety

As popular songs increasingly rely on name producers, the field for producer of the year, non-classical, has gotten increasingly crowded. Will Finneas become only the third producer to win in consecutive years? (Greg Kurstin triumphed in 2017 and 2018, while Babyface took home the award three times in a row between 1996 and 1998.) Is the so-called new guard of producers going to be acknowledged? Potential contenders in this ever-unpredictable category may include some Grammy first-timers. Omer Fedi Born in Tel Aviv and based in Los Angeles, Omer Fedi is arguably the breakout hip-hop producer of 2021. The 21-year-old has landed three...
MUSIC・14 HOURS AGO
iHeartRadio

iHeartRadio spoke with Lehman about his work on the acclaimed HBO series, which will conclude this year.
TV & VIDEOS・1 HOUR AGO
Billboard

Kelly Rowland Reacts to Viral Video of Her Run-In With Jay-Z: 'I See My Big Bro All The Time!'

Last Wednesday, the two were both at the Los Angeles premiere of Netflix's "The Harder They Fall," and a short clip of the two seeing one another made waves on the Internet and had fans smiling ear to ear, mainly due to Jay's pure reaction of shock and joy at seeing Rowland.
LOS ANGELES, CA・2 DAYS AGO

Dave Chappelle is courting controversy with his new Netflix special, while Hollywood is entering a major crisis of its own: the impending IATSE strike, which can shutdown showbiz. Meanwhile, award season is heating up with some buzzy contenders, as the box office is ready to take a stab with “Halloween Kills.”
MOVIES・6 DAYS AGO
Hello Magazine

Celine Dion left fans heartbroken as she announced a devastating health update that ultimately led to some very sad news. The singer shared a statement on her Instagram where she revealed that due to unfortunate developments in her health, the opening of her new Las Vegas residency would be delayed.
CELEBRITIES・2 DAYS AGO
kiss951.com

Kelly Clarkson caused a stir when she posted a picture of herself via Instagram on the set of The Voice in a short black dress with a big silver zipper. Fans immediately started to comment on her look. Most fans said she looked “beautiful” and called her “gorgeous,” but one...
CELEBRITIES・1 DAY AGO
Bossip

‘Queens’ Confession: Naturi Naughton Says She Faked An Episode Of MTV ‘Cribs’ During Time With 3LW—‘We Had To Pretend!’

Ahead of the Queens series premiere, Eve, Brandy, Naturi and Nadine sat down with the Breakfast Club to chat about filming the highly-anticipated show and their real-life careers in the music industry.
QUEENS, NY・2 DAYS AGO
iHeartRadio

Issa Rae Opens Up About Marriage During The Pandemic, Oversharing & More

'Insecure' fans around the world are gearing up for the show's bittersweet final season that is set to air on HBO come Oct.24.
CELEBRITIES・17 HOURS AGO