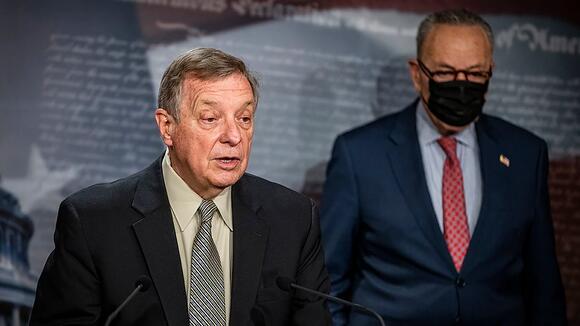 MacDonough's guidance, a copy of which was obtained by The Hill, all but closes the door to Democrats using the spending bill to provide a pathway to citizenship for millions of immigrants.

MacDonough, in her guidance, warned that the Democratic plan doesn't meet the strict rules on what can be in the spending bill, calling the plan "by any standard a broad, new immigration policy."

"The policy changes of this proposal far outweigh the budgetary impact scored to it and it is not appropriate for inclusion in reconciliation," she wrote in the ruling obtained by The Hill, referring to the budget process Democrats are using to avoid the Senate filibuster.

Democrats pitched MacDonough earlier this month on their plan to use the $3.5 trillion spending bill to provide 8 million green cards for four groups of immigrants: "Dreamers," temporary protected status (TPS) holders, agricultural workers and essential workers. Getting legal permanent resident status allows an individual to eventually apply for citizenship if they can meet other qualifications.

But because Democrats are using reconciliation to pass the spending bill without GOP support, there are strict requirements for what can be included. One of the requirements is that any provision in the bill has to impact the federal government's spending or revenues and that the impact can't be "merely incidental" to nonbudgetary intentions.

But MacDonough, in her written guidance to senators, wrote that granting LPR status has “no federal fiscal equivalent.”

“Changing the law to clear the way to LPR status is tremendous and enduring policy change that dwarfs its budgetary impact,” she added.

Democratic leaders had pledged that if the Senate referee initially rejected their efforts, they could keep trying to sway her until the $3.5 trillion spending bill was on the Senate floor. Senate Majority Leader Charles Schumer (D-N.Y.) on Sunday night said Democrats would take an alternative proposal to MacDonough.

"We are deeply disappointed in this decision but the fight to provide lawful status for immigrants in budget reconciliation continues. Senate Democrats have prepared alternate proposals and will be holding additional meetings with the Senate parliamentarian in the coming days," Schumer said.

Aides didn't immediately respond to questions about the alternative plan.

The spending bill is Democrats' best shot at getting immigration reform to President Biden 's desk. Though the House previously passed two smaller bills, Senate Democrats have been unable to come up with a plan that could get the 10 GOP votes needed to break a filibuster in the Senate. Durbin has been leading bipartisan talks, but they have been slow going, and Democrats don't have the total unity they need to nix the filibuster.

Democrats were optimistic that MacDonough would greenlight including their immigration plan in the spending bill because it would increase budget deficits by $139 billion over a 10-year period, according to initial estimates they’ve received from the Congressional Budget Office.

But Republicans also argued to MacDonough that immigration reform was outside the lines of what could be passed under reconciliation, which allows Democrats to avoid a GOP filibuster in the Senate.

“Immigration is way outside the bounds of what ought to be included,” Sen. John Thune (S.D.), the No. 2 Senate Republican, told The Hill.

“The Parliamentarian’s guidance reinforces long held traditions of the Senate that major policy changes should be done collaboratively and not through the reconciliation process. This decision reinforces the fact that the Senate is truly different than the House," he said in a statement on Sunday.

Outside groups supportive of using the spending bill to pass immigration reform argued that this was the first step in the process and not a nail in the coffin for getting some changes into the spending bill.

“We anticipated this would be a multistep, iterative process with multiple bites at the apple,” said FWD.us President Todd Schulte. “We continue to be confident that the ability for people to adjust status will be passed through the reconciliation process given the clear and substantial budgetary and economic impact.”

If Democrats can't sway MacDonough, they'll need to either leave the immigration language out of the spending bill or muster the 60 votes needed to keep it in. With Republicans opposed to using the spending package to pass immigration reform, that's unlikely.

Democrats are also likely to face fresh calls to nix the legislative filibuster, which would let them pass immigration reform and other priorities with a simple majority outside reconciliation, as well as either fire MacDonough or formally overrule her on the floor a move that would take total unity from Democrats and Vice President Harris presiding.

Greisa Martinez Rosas, the executive director of United We Dream Action, said that the "Senate parliamentarian is an unelected advisor to the Senate" and that Democrats and Biden "hold all the power to do the right thing."

"Democrats in Congress must deliver on their promises to the people," she said.

MacDonough previously ruled against Democrats' plan to include a $15 minimum wage in a coronavirus bill earlier this year as well as a 2017 ObamaCare repeal plan.

During a meeting with Democratic staffers last week, MacDonough asked for more information on the legal theory behind their proposal. Sen. Dick Durbin (Ill.), the No. 2 Senate Democrat and Judiciary Committee chairman, indicated last week that Democrats were still optimistic.

"We feel very strong about that position, and we hope it is persuasive," he said of the Democrats' legal justification. "But ultimately it is her decision."

Fight disinformation. Get a daily recap of the facts that matter. Sign up for the free Mother Jones newsletter. In recent days, Sen. Joe Manchin (D-W.Va.) has told associates that he is considering leaving the Democratic Party if President Joe Biden and Democrats on Capitol Hill do not agree to his demand to cut the size of the social infrastructure bill from $3.5 trillion to $1.75 trillion, according to people who have heard Manchin discuss this. Manchin has said that if this were to happen, he would declare himself an “American Independent.” And he has devised a detailed exit strategy for his departure.
CONGRESS & COURTS・1 DAY AGO
NewsRadio 740 KTRH

UPDATE: Mitch McConnell and Senate Republicans on Wednesday blocked the Freedom to Vote Act from advancing, as expected. The vote fell along party lines, with all 50 Republicans upholding a filibuster to stop the measure, which is aimed at safeguarding the right to vote. Original story below. *** WASHINGTON — It’s not often the leader of the United States Senate holds a vote knowing it will fail. It’s even less often that the Senate leader calls a doomed vote for one of the most important bills in his party’s legislative agenda. Majority Leader Chuck Schumer (D-N.Y.) is about to do just that. The Senate will...
CONGRESS & COURTS・1 DAY AGO
MSNBC

Senator Gillibrand (D-NY) speaks with Nicolle Wallace about how Senate Democrats and the Biden Administration are working to “find common ground” in order to pass infrastructure reform and explains why she is supportive of abandoning the filibuster to move ahead with voting rights legislationOct. 21, 2021.
CONGRESS & COURTS・6 HOURS AGO

Capitol Hill -- Senate Republicans are expected to defeat -- for the second time this year -- a Democratic measure aimed at enacting sweeping federal election law changes, a move that is certain to increase pressure on the majority to change the chamber's filibuster rule. "This bill is a compromise,...
CONGRESS & COURTS・1 DAY AGO
Business Insider

All GOP Senators moved to block debate on a major voting rights bill that Democrats framed as the last chance to save American democracy.
CONGRESS & COURTS・1 DAY AGO
Fox News

Just 10 days after President Joe Biden's inauguration, NBC News reported that the new White House team and Senate Democrats were "embarking on a mission to shape the courts after Republicans overhauled them in the last four years." Updating our earlier coverage, it looks like that mission is off to...
PRESIDENTIAL ELECTION・1 DAY AGO

Factbox: Biden, Democrats $2 trillion spending plan: What is in, what is cut?

WASHINGTON, Oct 20 (Reuters) - U.S. President Joe Biden and Democrats in Congress rolled out an ambitious $3.5 trillion spending plan in August to support his economic policies. The measure is being whittled down to reach a compromise that all Democratic legislators will support. After a flurry of White House...
U.S. POLITICS・1 DAY AGO
POLITICO

Democrats weigh slashing $200B in housing aid from spending bill

Democrats are negotiating the cuts as they try to reconcile demands from centrists to slash the size of the bill with resistance from progressives.
CONGRESS & COURTS・1 DAY AGO

Senate Republicans blocked debate on sweeping federal voting rights legislation backed by President Biden on Wednesday, in a move likely to renew calls among some Democratic leaders to alter filibuster rules. The Senate voted 49-51 on whether to take up the "Freedom to Vote Act," falling far short of the...
PRESIDENTIAL ELECTION・1 DAY AGO
The Independent

For the third time this year, Senate Democrats will force a test vote Wednesday on sweeping elections legislation that they tout as a powerful counterweight to new voting restrictions in the states.Once again, Republicans are certain to block it.But amid the stalemate, there are signs that Democrats are making headway in their effort to create consensus around changing Senate procedural rules, a key step that could allow them to muscle transformative legislation through the narrowly divided chamber.Sen. Angus King, a Maine independent who caucuses with Democrats, recently eased his longstanding opposition to changing the filibuster rules, which create a...
CONGRESS & COURTS・1 DAY AGO
CBS News

Washington — A revamped bill aimed at strengthen voting rights and overhauling the nation's election systems failed to advance in the Senate on Wednesday, as Democrats couldn't overcome unanimous opposition from Republicans who criticized the bill as federal overreach. The procedural vote to begin debate on the Freedom to Vote...
CONGRESS & COURTS・1 DAY AGO
Washington Post

Biden tells Democrats that package of up to $1.9 trillion should be new target of talks

President Biden told Democrats during a private meeting Tuesday that he believed they could secure a deal on a new tax-and-spending proposal between $1.75 trillion and $1.9 trillion, far less than some in the party initially sought, even as some lawmakers later maintained it still would allow them to accomplish broad swaths of their vast economic agenda.
PRESIDENTIAL ELECTION・2 DAYS AGO
POLITICO

Democrats had hoped it could be an alternative way of curbing emissions in their reconciliation bill. What they're saying: Key moderate senators are resisting efforts to impose a carbon tax as part of their climate action plan, sending progressives back to the drawing board. Sen. Joe Manchin plainly told reporters...
CONGRESS & COURTS・2 DAYS AGO
Washington Times

Tired of having Texas bear the brunt of the border crisis, Sen. Ted Cruz is proposing a different idea: ship newly arrived illegal immigrants to deep blue territories like New England or California, and see how they handle it. He even proposed putting one of the new ports of entry...
REHOBOTH BEACH, DE・2 DAYS AGO
Myhighplains.com

Further, the activists warn that Latino voting rates have nearly doubled in the past decade and will remember broken promises of immigration reform in the next election should the Biden administration and the Democratic majority in the House and Senate not deliver this year. “Saying our frontline workers are heroes...
PRESIDENTIAL ELECTION・1 DAY AGO
KOLD-TV