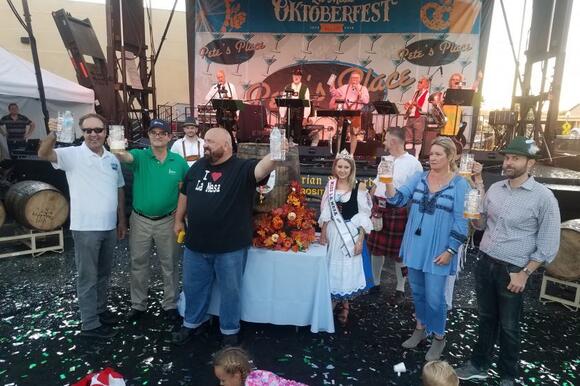 Oktoberfest in La Mesa is just around the corner, back in person after last year's virtual festival because of COVID-19 concerns.

The La Mesa City Council last week agreed to fund the event — and some others — through the city's Village Enhancement Fund, which relies on parking meter revenues to support activities in the downtown area.

Officials allocated $99,440 to support Oktoberfest, Holiday in the Village, weekly summer car shows and an advertising campaign for the village.

The Village Enhancement Fund started in September 2019 as a pilot program. It is funded from 50 percent of annual net parking revenues from meters around the downtown area. Its sole purpose is to encourage ongoing investment in the downtown village and create more entertainment opportunities for residents and families.

The program allows nonprofits and private businesses to apply for funds to finance events, promotions, programs, and advertising to benefit downtown businesses.

There will also be a sausage tossing contest and a Chicken Dance dance-off. There are also plans for an inflatable pretzel relay race and a "Mr. and Mrs. Oktoberfest" contest.

A "bier hall" on Palm Avenue will have televisions set up to watch college and NFL games as well as food service, including bratwurst, schnitzel, potato pancakes, giant pretzels and apple strudel.

Nearly 50 vendors selling food and more than 60 other vendors — from crafts to Tupperware — will be selling items along a six-block stretch including parts of La Mesa Boulevard and several side streets which will be closed off to vehicle traffic.

For the younger crowd, there will be a "German Karneval" on Palm Avenue between La Mesa Boulevard and Lemon Avenue with carnival games, temporary tattoos, bounce houses, balloon art, a bungee trampoline, caricatures, inflatable slides and a Ferris wheel. Event organizers are also planning on holding scavenger hunts.

On-leash dogs are allowed on site, with the exception of inside the beer gardens. There will be a Dackeldorf Dachshund Village with a variety of activities like dog races, a fashion show, contests and prizes for dogs of all types.

Why is North County falling behind in vaccinating Latinos?

While vaccination rates among Latino communities in South San Diego County have risen well above the region's average, some question why the same isn't true for Latino populations in North County neighborhoods.
SAN DIEGO COUNTY, CA・17 HOURS AGO

The organization held an annual meeting at Coastal Roots Farm in Encinitas to celebrate its 10-year plan for food sustainability
SAN DIEGO, CA・17 HOURS AGO

San Diegans are running out of ways to cut water use

Re "Newsom declares statewide drought emergency, urges California to conserve water" (Oct. 19): What are we who have been cutting for years to do?
SAN DIEGO, CA・15 HOURS AGO
San Diego Union-Tribune

The shelter would have 170 beds for men, women and children
NATIONAL CITY, CA・2 DAYS AGO

Rescued horses get a checkup in Guatay

Staging can unlock a home's star power for hopeful sellers

Experts share basics on what helps sell houses fast — and at a price that satisfies
SAN DIEGO, CA・1 DAY AGO
San Diego Union-Tribune

Marathon ready to make a return to streets of San Diego