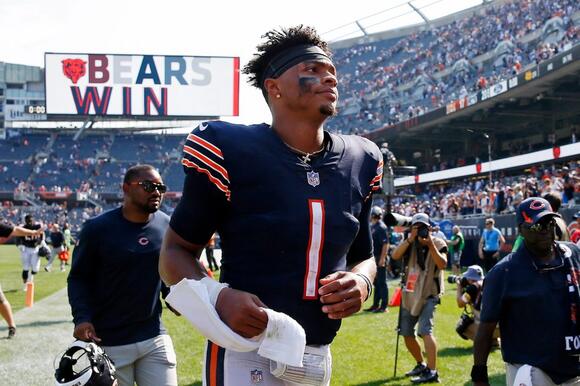 After a strong start to the game , starting quarterback Andy Dalton had to exit with a knee injury. Once up 20-3 against Cincinnati, the Bears had to hold on for a 20-17 victory despite their defense picking off Joe Burrow on three consecutive pass attempts.

Following the game, Justin Fields had a pretty realistic opinion of his own performance in the Bears’ first win of the season.

“I don’t think I’m pleased with how I played at all. I think there’s a lot more in me that I have to show. That’s going to come with time. I know it’s not going to happen overnight, so I’m just going to keep grinding, and no matter what happens, I know I’m meant for this. I’m meant to be here,” Fields said, via Jeff Dickerson of ESPN . “My path here has been crazy. When I was younger, I never thought I would be here in this position. I’m here for a reason. And I definitely think I can play better. I just think that this is the beginning. I’m definitely excited for the future and excited to get back to practice on Monday, Tuesday.” 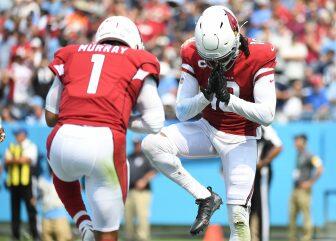 The first-round pick from Ohio State completed a mere 6-of-13 passes for 60 yards with an interception. Fields added another 31 yards on 10 rush attempts. It wasn’t the best performance from the young signal caller.

If Fields is forced to start moving forward, Chicago’s brass seems to be perfectly fine with throwing him into the fire.

“He’s (Justin Fields) farther along than we thought he’d be at this point. We feel good with him,” head coach Matt Nagy told reporters after the game.

It’s not yet known whether Fields will have to be under center when Chicago takes on the Cleveland Browns next Sunday .

Nagy noted that he doesn’t believe Dalton suffered a torn ACL during Sunday’s game. However, the veteran will undergo an MRI on Monday.

All of this comes on the heels of reports suggesting that Chicago wanted to see more of Justin Fields on the field as the season progresses. Whether it’s out of necessity or something else, that might happen sooner rather than later.

In an attempt to bolster their anemic offense, the Chicago Bears got Justin Fields and the team’s attack some help by trading for Miami Dolphins wide receiver Jakeem Grant. This, according to Tom Pelissero of The NFL Network. The move comes shortly after the Bears scored a 24-14 win over...
NFL・16 DAYS AGO
FanSided

Chris Simms admits he was wrong about Justin Fields

Before the start of the season, NFL analyst Chris Simms was criticized for his evaluation of Bears rookie quarterback Justin Fields, ranking him the 39th quarterback in the NFL. Fields ranked far below other quarterbacks taken in the 2021 NFL draft, including Trevor Lawrence (28th), Zach Wilson (27th) and Mac...
NFL・1 DAY AGO
Chicago Tribune

Chicago Bears Q&A: Was Matt Nagy trying to send a message to George McCaskey about ‘progress’? Is Justin Fields getting a better feel for NFL speed?

Chicago Bears coach Matt Nagy talked about “progress” after the team’s defeat to the Green Bay Packers in Week 6 — but how much have the Bears made with rookie quarterback Justin Fields? Brad Biggs addresses that and much more in his weekly Bears mailbag. Matt Nagy spoke a lot about “progress” in his Monday news conference. Were his words directed toward George McCaskey? — @mmesq11 That is an ...
NFL・1 DAY AGO

A new era is underway in Chicago, and an old one is dominating in Tampa. The Bears and Buccaneers couldn't be in much more different places as we approach the midway point of the 2021 NFL season. Windy City is still learning to love rookie quarterback Justin Fields, whose athleticism has yet to overcome the flaws of Matt Nagy's offense. The Bucs, meanwhile, are cruising right along with 44-year-old Tom Brady under center, boasting one of the game's most productive offenses as a true threat to repeat.
NFL・1 DAY AGO
bleachernation.com

Justin Fields has all the qualities you want to see from a potential franchise quarterback. He combines arm strength, accuracy, swagger, fearlessness, mobility, and a willingness to work to be better in a way that makes it easy to gravitate toward him. Those qualities also makes it pretty dang easy to dream on a bright future ahead … even if his first brush with the Packers didn’t go all too well.
NFL・2 DAYS AGO
chicitysports.com

NFL analyst Chris Simms was under fire ahead of the 2021 NFL Draft for his criticism on rookie quarterback Justin Fields. He ranked Fields as the fifth-best quarterback in this draft behind Trevor Lawrence, Zach Wilson, Mac Jones and Trey Lance, mocking him to go Tampa Bay at No. 32 overall. Then ahead of the start of the season, Simms had Fields as his 39th-ranked QB in all of football.
NFL・1 DAY AGO
firstsportz.com

Chicago Bears dropped an explosive statement sending its fans into an inexplicable burst of frenzy as they announced that Justin Fields will be the starting quarterback for the rest of the season. It came through their head coach, Matt Nagy after he was keenly observant of the developments in the last two weeks. In their preceding game, The Bears managed a comfortable victory over the Detroit Lions which came on the back of a mortifying shellacking at the hands of the Cleveland Browns.
NFL・14 DAYS AGO

Chicago Bears head coach Matt Nagy said Wednesday that rookie quarterback Justin Fields will be the team’s starter moving forward. Fields, the No. 11 pick last year’s NFL draft, opened the season as the team’s backup but had started each of Chicago’s past two games with Andy Dalton out with an injury.
NFL・14 DAYS AGO
CBS Sports

Justin Fields moved to 2-1 as a starter on Sunday, as he and his Chicago Bears defeated the Las Vegas Raiders in Sin City, 20-9. It wasn't pretty by any means, but the Bears were able to establish some consistency on offense while the Raiders were unable to do so.
NFL・11 DAYS AGO
247Sports

With Justin Fields, Bears Offense Can Finally Be Explosive

LAKE FOREST, Ill. — In a better late than never move, Matt Nagy officially named rookie Justin Fields the team's starting quarterback over Andy Dalton on Wednesday. The announcement came just a day after Nagy had doubled down on Dalton -- again -- but why look a gift horse in the mouth? Moving forward with Fields was the only move for the Bears to make if they didn't want to be mired in offensive mediocrity with Dalton the remainder of the season. Now, with the talented rookie QB under center, the Bears' offense will surely be flawed, as mistakes will happen, but it's also about to get a whole lot more dynamic.
NFL・13 DAYS AGO
247Sports

LAKE FOREST, Ill. — Wednesday morning signaled a turning point for the Chicago Bears franchise. Head coach Matt Nagy, after weeks and months of back and forth regarding the starting quarterback finally gave a desperate fanbase the news everyone has been waiting for. The Bears will move forward with rookie Justin Fields as the starting quarterback. Fields has started the last two games for the Bears, giving Chicago enough of a sample size to feel confident that the 11th overall pick can lead the Bears and develop into a true franchise quarterback.
NFL・14 DAYS AGO

(670 The Score) The Bears missed a golden scoring opportunity while trailing 10-7 against the Packers with a little more than three minutes remaining in the second quarter Sunday. On a second-and-7 situation from his own 35-yard line, Bears rookie quarterback Justin Fields rolled out to the left after a...
NFL・3 DAYS AGO
Chicago Sun-Times

On third-and-13 in the Jan. 1 national semifinal, quarterback Justin Fields sprinted toward the first-down marker and tried to put a spin move on Clemson’s James Skalski, who speared him in the back and drew an ejection for targeting. Fields’ ribs ached throughout Ohio State’s national title game 10 days later.
NFL・10 DAYS AGO
Chicago Tribune

‘This is Justin’s time. Let him grow.’ What Justin Fields’ QB promotion and Matt Nagy’s sudden 180 mean for the Chicago Bears in 2021 — and beyond.

Matt Nagy made the landmark decision at some point Tuesday. Justin Fields would remain the Chicago Bears starting quarterback. Not only for their game Sunday against the Las Vegas Raiders and not just until veteran Andy Dalton was fully healthy again. Fields will be the top dog full time. For the rest of the season and beyond. No turning back. Nagy shared that news with his quarterbacks ...
NFL・14 DAYS AGO
Chicago Sun-Times

Bears rookie quarterback Justin Fields hyperextended his left knee in the win over the Raiders and is still dealing with soreness, but said flatly he will play against the Packers this weekend. “Yeah, I’ll be good by Sunday,” he said Wednesday. When pressed on whether that meant he was not...
NFL・8 DAYS AGO
Herald & Review

The discomfort was instant. As Chicago Bears quarterback Justin Fields sprinted to his right Sunday, Las Vegas Raiders defensive end Yannick Ngakoue caught him from behind, tangling Fields’ feet and causing his stride to become discombobulated. Fields’ left leg planted awkwardly in his attempt to break free, and he went down hard.
NFL・9 DAYS AGO
670 The Score

Justin Fields passed for 111 yards and a touchdown to lead the visiting Chicago Bears to a 20-9 victory over the Las Vegas Raiders on Sunday afternoon. Fields completed 12-of-20 passes in his first start since being named the permanent starter for the Bears (3-2), who got plenty of help from a ground game that rolled up 143 yards. Khalil Herbert, a rookie from Virginia Tech, led the way with 75 yards on 18 carries, while Damien Williams rushed for 64 yards and a touchdown.
NFL・11 DAYS AGO
Sportsnaut