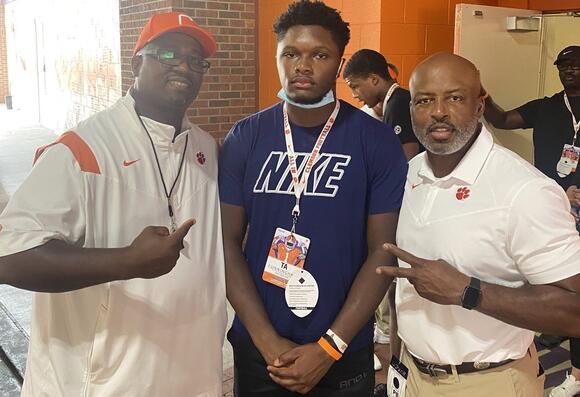 One of the best prospects in the Class of 2024 was on campus for Clemson’s 14-8 win over Georgia Tech Saturday.

“I loved my experience in Death Valley! The most impactful part of my trip was listening to Coach Swinney speak to the team and pray at the end of the night,” Cunningham told TCI. “It showed that he really is who he says he is off camera too.”

It just so happens that the big-time defensive lineman was in attendance to witness some history. Saturday marked the third consecutive game that Clemson’s defense didn’t allow an offensive touchdown.

“It’s something I have to take a mental note of,” he said. “It’s a good feeling knowing that I’m being recruited by a school that I know could develop me into a defensive star.”

Cunningham continues to build a relationship with both defensive ends coach Lemanski Hall and defensive tackles coach/recruiting coordinator Todd Bates. He was shown around by both of them back when he took an unofficial visit on June 16. Nearly three months later, he had the pleasure of being in their presence again.

“When I spoke to them they told me how happy they were that I could make it and we even talked about my sack celebration that I do,” Cunningham said.

While nothing is set in stone quite yet, Cunningham told TCI that he’s looking to come back when Clemson hosts UConn on Nov. 13.

His experience in Clemson on Saturday has definitely left a lasting impression already.

“Clemson is super heavy on family and it’s evident when you get there,” he added.

Time to get the latest Clemson apparel to show your Tiger pride. Order your officially licensed Clemson gear right here! 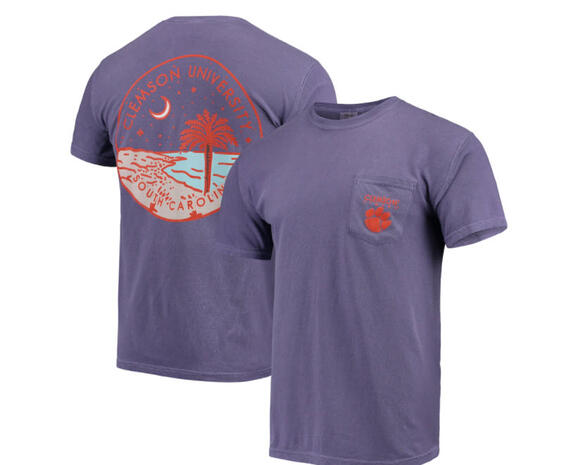 Hall of Fame coach Barry Switzer knows who his top candidate would be if he were in charge of choosing the next Oklahoma head man. Mike Leach is a name both Sooners fans and former coach Lincoln Riley is familiar with, and Switzer believes he’d be the perfect fit. “I...
OKLAHOMA STATE・2 DAYS AGO
On3.com

After putting together a 92-39 record in 12 seasons at Notre Dame, Brian Kelly has left to become the next head coach of the LSU Tigers. Kelly signed a 10-year, $95 million contract with LSU. The news was shocking and has sent waves throughout the college football landscape. According to Paul Finebaum, Brian Kelly bolting Notre Dame for LSU can be attributed to one simple reason: to win a national championship.
NOTRE DAME, IN・2 DAYS AGO

On Thursday night, Alabama head coach Nick Saban addressed his team’s running back situation while making his weekly radio appearance. During that discussion, Saban mentioned one of his former players. Since the Crimson Tide are shorthanded at running back, Saban mentioned how Keilan Robinson would be “playing a lot” if...
ALABAMA STATE・13 DAYS AGO
FanBuzz

Who is Lincoln Riley’s Wife?

Lincoln Riley may be young, but he’s already one of college football‘s premier coaches. He proved his pedigree on the field by leading the Oklahoma Sooners to four-straight Big 12 championships and three-straight College Football Playoff semifinal appearances. Despite falling short in the Rose Bowl, Orange Bowl and Peach Bowl...
NFL・3 DAYS AGO
92.9 WTUG

Let's go back to 2019. LSU came to town holding the number 1 ranking in the nation. Alabama looked ready to knock the Tigers off the pedestal. Unfortunately for us, the game ended in the Tigers victorious 46-41. We all felt bad after that loss, but one person certainly was reveling in Tide fans' sorrows.
ALABAMA STATE・29 DAYS AGO
On3.com

Nick Saban reveals why he took the LSU job, Miss Terry's role in it

Alabama head coach Nick Saban gained most of his fame from his time in Tuscaloosa, but the 70-year-old coach had several stops before arriving at Alabama, perhaps none more important than the LSU head coaching job. During Thursday night’s Hey Coach & the Nick Saban Show, Saban revealed the steps...
NFL・27 DAYS AGO

Multiple landing spots have emerged as potential options for Spencer Rattler, but one West Coast program is starting to gain serious momentum. On Monday, SMU and South Carolina were mentioned by NFL analyst Matt Miller as potential landing spots. The only issue is neither is very close to Rattler’s home state of Arizona.
NFL・2 DAYS AGO
On3.com

LSU alum and ESPN analyst Marcus Spears couldn’t hold back his excitement over the Tigers hiring Notre Dame head coach Brian Kelly. “I like the Brian Kelly hire. Dude can coach and I want LSU football to win consistently,” Spears wrote on Twitter. After sharing his take, the former Tigers...
COLLEGE SPORTS・2 DAYS AGO
ClutchPoints

It appears former USC star Reggie Bush is a big fan of the Trojans hiring Lincoln Riley as their new head coach. After a long search for the next tactician to catapult them back to contention, USC landed one of the most sought-after coaches in the college football ranks in Riley. The 38-year-old coach left the Oklahoma Sooners to join the proud school known for fielding competitive teams across all sports.
NFL・3 DAYS AGO
FanSided

The Notre Dame football team must tread lightly in the coming weeks, as they hope to hand on to some elite players in the next two recruiting classes. On Monday, news came down that Notre Dame football would be losing head coach Brian Kelly to the LSU Tigers. At first, it was just a rumor, then it became a reality, with Kelly telling his team to meet him for a meeting to discuss his departure at 7 AM ET on Tuesday.
NOTRE DAME, IN・2 DAYS AGO

An Ohio State quarterback is on his way out of Columbus. On Sunday, Buckeyes‘ backup QB Jack Miller III entered the transfer portal. The news comes courtesy The Athletic’s Max Olson. Miller, a redshirt freshman, was suspended by the school earlier this month after an impaired-driving arrest. He was Ohio...
OHIO STATE・4 DAYS AGO
USA TODAY Sports Media Group

In the tidal wave that Brian Kelly leaves at Notre Dame upon him taking the LSU job we’ve heard from the first member of the Fighting Irish coaching staff in regards to the move. Notre Dame special teams coordinator Brian Polian took to Twitter to share the following in the...
NOTRE DAME, IN・2 DAYS AGO
The Big Lead

Notre Dame is looking for a new head football coach after Brian Kelly shocked the sports world by bolting to take the LSU job. Coaching the Fighting Irish is a marquee job and Notre Dame should have no trouble finding an excellent replacement. What follows are five candidates to replace Kelly as the school's head coach.
COLLEGE SPORTS・3 DAYS AGO
Sports Illustrated

Kelly has been coaching at Notre Dame since 2010 and has compiled a 112-40 record while there. USC will likely have to find their man somewhere else. For more Notre Dame news, head over to Irish Breakdown.
COLLEGE SPORTS・10 DAYS AGO
Los Angeles Times

Here's who is joining Lincoln Riley's coaching staff at USC

As Lincoln Riley assembles his USC coaching staff, he's starting by pulling from his former staff at Oklahoma.
LOS ANGELES, CA・3 DAYS AGO
The Spun

Not even Ohio State fans can hate on Michigan head coach Jim Harbaugh’s latest gesture. On Monday, Harbaugh and his wife, Sarah, announced that they’re giving whatever incentive bonus money earned this season back to the athletic department. That money will then be distributed to those in the department who had to take a pay cut last year because of the COVID-19 pandemic.
COLLEGE SPORTS・2 DAYS AGO
The Clemson Insider

Clemson stops by school of 5-star, nation's No. 1 RB

Members of Clemson's coaching staff stopped by the high school of a top running back target in the class of 2023 on Wednesday. Running backs coach C.J. Spiller and quarterbacks coach Brandon Streeter were (...)
CLEMSON, SC・1 DAY AGO
The Clemson Insider

It didn't take long after Lincoln Riley, who spent five seasons at the helm of Oklahoma's football program, accepted the head coaching job at Southern California for talk of Brent Venables being a strong (...)
OKLAHOMA STATE・2 DAYS AGO