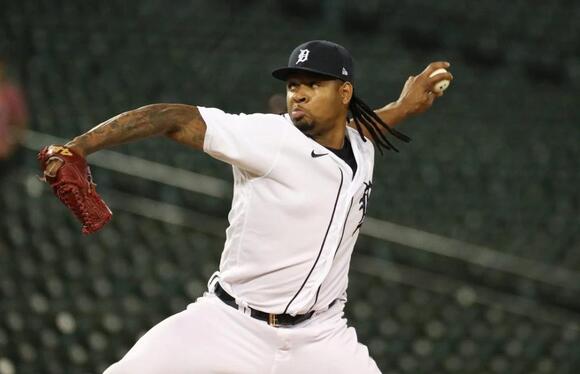 Soto has a fractured ring finger on his left (pitching) hand and Hill has a sprained left knee. Both are expected to miss the rest of the season, which ends on Oct. 3. 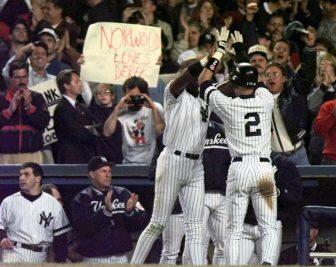 Hill, 25, collided with Rays first baseman Ji-Man Choi at first base in the fifth inning of Saturday’s 4-3 victory and he left the field in a wheelchair. He batted .259 with three homers and 14 RBIs in 49 games this season.

Detroit Tigers prospect Riley Greene has been scratched from the Arizona Fall League roster. The 21-year-old center fielder sustained a concussion during his final game for Triple-A Toledo, an Oct. 2 matchup against the St. Paul Saints at Fifth Third Field in Toledo, a source with knowledge of the situation told the Free Press on Monday. The source wished to remain anonymous because the Tigers have not disclosed the injury.
MLB・13 DAYS AGO
Detroit Sports Nation

Detroit Tigers prospect Riley Greene has suffered a concussion and will not be participating in the Arizona Fall League:. I’m told Riley Greene isn’t going to the Arizona Fall League because he suffered a concussion in an outfield collision near the end of the season. Still recovering and has to clear protocol. https://t.co/PQAw4kTGCc.
MLB・14 DAYS AGO
FanSided

The Detroit Tigers have starting pitching high on their list of priorities to address this winter. It is no secret that the Detroit Tigers founded their rebuild upon pitching. Double-A Erie’s rotation once featured Casey Mize, Tarik Skubal, Matt Manning, and Alex Faedo all at the same time. Two have established themselves as legitimate, big-league starting pitchers. One still developing. One injured.
MLB・11 DAYS AGO
FanSided

Detroit Tigers: With one swing, Ordonez created a generation of fans

On October 14th, 2006, Detroit Tigers outfielder Magglio Ordonez not only sent the Tigers to the World Series but created a generation of new Tigers fans. For whatever age label you fall into since the definition constantly changes, (Gen X, Boomers, etc) you remember when you became a fan of your favorite team. For me, I was five years old when I got into baseball and into the Detroit Tigers.
MLB・10 DAYS AGO
Detroit Sports Nation

On October 14, 2006, the Detroit Tigers faced off against the Oakland Athletics in game four of the American League Championship Series with a chance to advance to their first World Series in over 20 years. Three years earlier, the Tigers lost a record 119 games en route to their place in history. On this night, Magglio Ordonez made his own history with the game tied at three in the bottom of the ninth. With one swing of the bat, Ordonez launched a home run into the left-field seats and launched the Tigers into the World Series. Coincidentally, this magical moment fell on the same day as the Tigers’ last World Series win.
MLB・10 DAYS AGO
1049 The Edge

What's the most famous corner in Detroit? It just happens to be Michigan @ Trumbull, the home of one of the most famous baseball stadiums in the history of baseball: Tiger Stadium. The stadium is sadly (and unnecessarily) no longer there. From 1912 to 1999 – 87 years – Detroiters, Michiganders, and people from all over the country came here to enjoy baseball.
DETROIT, MI・14 DAYS AGO
1240 WJIM

How many times in the past have you heard from one of your friends, “hey, how about those Tigers, eh?” Well, now try to imagine saying “how ‘bout them Wolverines?”. Before the Detroit Tigers, there was another baseball team: the Detroit Wolverines. The team was the brainchild of Detroit mayor William G. Thompson, who decided to name the team after Michigan’s mascot, the 'mighty' wolverine. Enough local buzz about this new ball club brought 1,286 spectators to Detroit's very first Major League baseball game on May 2, 1881. The game was played at their very own field, called Recreation Park, between Brady Street and Willis Avenue.
DETROIT, MI・10 DAYS AGO

The New York Yankees will need a shortstop. So do the Detroit Tigers. How much of this will affect the potential bidding war?. As Carlos Correa continues to have a mega post-season for the Houston Astros, it is safe to say that Detroit Tigers fans are counting down the days until the playoffs are over and free agency season begins.
MLB・3 DAYS AGO
FanSided

The Detroit Tigers did something in 2021 they didn’t do in years’ past: move on from non-contributors. We have all heard the “addition by subtraction” cliche by now; but for the Detroit Tigers, moving on from players who were not contributing to the club’s success may have been the difference between their infamous 9-24 start and their strong finish and echoing optimism.
MLB・13 DAYS AGO
FanSided

Wily Peralta was an afterthought signing this offseason but quickly became a reliable arm in the Detroit Tigers rotation. There were boundless concerns for pitchers heading into the 2021 season league-wide; particularly with starters. Due to a shortened 2020 season, many teams had to get creative about their approach to their rotation this year. For the Detroit Tigers, there were starters like Matthew Boyd and Spencer Turnbull that had significantly reduced innings, but there were also pitchers who didn’t pitch at all in 2020 aside from possibly some alternate site scrimmage work (think Matt Manning).
MLB・9 DAYS AGO
FanSided

Detroit Tigers: Shortstop Corey Seager is worth a look this offseason

The Detroit Tigers are projected to sign a big-name free agent this offseason. There is plenty to consider bringing in and plenty the organization should avoid. One of the names that has the Tigers as one of the frontrunners is Carlos Correa. However, bypassing the Astros, long-time shortstop might not...
MLB・9 DAYS AGO

The Detroit Tigers have hired a new Director of Latin Player Development in Euclides Rojas. Per Francys Romero, who does a great job in covering all things Cuban baseball, he announced that the Detroit Tigers have hired former pitching and bullpen coach Euclides Rojas to be the new Director of Latin Player Development. The team has not made a formal announcement.
MLB・8 DAYS AGO
detroitsportsnation.com

The Detroit Tigers have been around for a very long time which means they have a very long list of great hitters. Today we will be taking a look at the top 10 greatest Tigers hitters of all time. No. 1 on this list should not come as a surprise, but there is sure to be some disagreement when it comes to the other nine who made this list. Who do you think are the greatest hitters ever to wear the Old English ‘D’? Are we in lockstep?
MLB・6 DAYS AGO
FanSided

A decision remains on whether Niko Goodrum will maintain the super-utility stable for the Detroit Tigers in 2022. Detroit Tigers utilityman Niko Goodrum might be looking for a new organization as early as this offseason after a 2021 season in which he graded out right around replacement level. Goodrum has...
MLB・5 DAYS AGO
Detroit Sports Nation

10) SS – ALAN TRAMMELL. Alan Trammell is without question the greatest Detroit Tigers shortstop of all-time. In 20 seasons with the Tigers, Trammell accomplished some great things, including winning a World Series in 1984 and being selected to six All-Star teams. Tigers fans will always remember Trammell as being...
MLB・5 DAYS AGO
FanSided

The Detroit Tigers may have only finished third in the American League Central this season, but they showed massive improvements across the board. The Detroit Tigers are ready to attack the free-agent market in a way Tigers fans haven’t seen in quite some time. That being said, fringe players who may have had a spot on the roster during a rebuild may not be back on the roster next year.
MLB・2 DAYS AGO
FanSided

Detroit Tigers: A look at who is eligible for 2021 Rule 5 draft

The Detroit Tigers will have some decisions to make as we take a look at Rule 5 eligible players within the minor league system. As the MLB postseason continues, several teams are working on who they are going to keep on their 40-man roster. On the flip side, for some teams, there is not a lot of decisions to be made. For the Detroit Tigers, there are a few players within their minor league system that they must make a decision on or risk losing in the December Rule 5 draft.
MLB・4 DAYS AGO
Bless You Boys

One final telling detail illustrating A.J. Hinch’s mentality and mentorship of his players this season emerged in his post-game interview after the Tigers’ season-ending victory over the Chicago White Sox. Hinch had actually given his end-of-the-season speech the day after the Detroit Tigers were officially eliminated from the postseason back in mid-September. The point? To emphasize the moment the 2021 season officially failed according to his expectations, and to reinforce to each and every member of the team and the staff the high standards Hinch has, both for his players, but also for himself and his coaching staff.
MLB・6 DAYS AGO