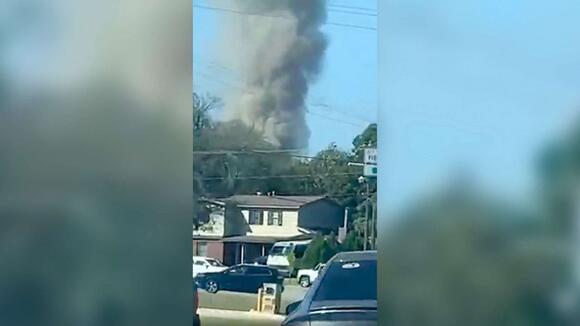 Three homes have been damaged after a military training aircraft crashed in Lake Worth, Texas, according to the Fort Worth Fire Department.

The Navy T-45C Goshawk jet trainer aircraft crashed in the backyard of one of the homes, and the debris damaged the nearby structures, Lake Worth Fire Chief Ryan Arthur told reporters at a press conference Sunday afternoon.

A military flight student and an instructor pilot were apparently conducting a drill training exercise at the time of the crash, Arthur said. The pilots were on a routine training flight out of Corpus Christi International Airport before the incident, according to a statement from the chief of Naval air training. The aircraft is assigned to the training wing of the Naval Air Station in Kingsville, Texas

One of the pilot's parachutes got caught in a power line after he was ejected from the plane, he said. The other was found in a neighborhood nearby, Arthur said.

Both pilots are being treated at the hospital, Arthur said. The instructor is in stable condition, but the condition of the student naval aviator is unknown, according to the military.

A small fire resulted from the crash, Arthur said. Three residents of the damaged homes sustained minor injuries and were treated on the scene, according to the Fort Worth Fire Department.

"We are incredibly fortunate that the plane crashed in the backyard of the homes and not the residences themselves," a statement from the Fort Worth Fire Department read.

More than 40 homes in the area surrounding the crash are experiencing power outages, according to officials.

Residents were advised to stay out of the area due to the hazardous material that needs to be cleared. Cleanup crews have been advised by the military that the ejection seats could contain unexploded ordnances.

Additional details were not immediately available.

WASHINGTON (AP) — The U.S. moved a step closer to expanding COVID-19 vaccinations for millions more children as government advisers on Tuesday endorsed kid-size doses of Pfizer’s shots for 5- to 11-year-olds. A Food and Drug Administration advisory panel voted unanimously, with one abstention, that the vaccine’s benefits in preventing...
PUBLIC HEALTH・14 HOURS AGO
The Associated Press

President Biden on Tuesday was mocked by critics on social media after briefly stumbling through a line during an Arlington, Virginia, campaign event for fellow Democrat Terry McAuliffe, who is in a tough gubernatorial race in the state. Biden was onstage with McAuliffe when his speech turned to the candidate’s...
PRESIDENTIAL ELECTION・8 HOURS AGO
CBS News

The suspect in the shooting that killed two people and injured four others in a Boise, Idaho, mall has died, city officials announced Tuesday. The four injured victims, including a city police officer, are all expected to survive. It is not yet clear how the suspect died, though police said...
BOISE, ID・2 HOURS AGO

HONG KONG — This royal wedding was an untypically understated affair. When Princess Mako of Japan, Emperor Naruhito’s niece and the daughter of his younger brother, Crown Prince Fumihito, wed in Tokyo on Tuesday, there was no lavish ceremony, and none of the rites traditionally associated with Japanese royal weddings. In another first, she is forgoing the lump-sum payment of about $1.3 million that female royals receive after they lose their imperial status by marrying a commoner.
RELATIONSHIPS・1 DAY AGO
The Associated Press

DUBAI, United Arab Emirates (AP) — Iran’s president said Wednesday that a cyberattack which paralyzed every gas station in the Islamic Republic was designed to get “people angry by creating disorder and disruption,” as long lines still snaked around the pumps a day after the incident began. Ebrahim Raisi’s remarks...
GAS PRICE・6 HOURS AGO
ABC News

Rosenworcel has been a fierce advocate of net neutrality.
CONGRESS & COURTS・17 HOURS AGO
NBC News

The three men Kyle Rittenhouse shot during a protest against police brutality in Wisconsin can be labeled rioters, looters or arsonists if the teenager's defense team has evidence to support the characterizations — but they shouldn't be called victims, the judge in his murder trial ruled this week. The decision...
KENOSHA COUNTY, WI・10 HOURS AGO

Three of President Joe Biden’s major nominees were confirmed to ambassadorships by the Senate on Tuesday.
CONGRESS & COURTS・14 HOURS AGO
CNN

Investigators in Florida confused Brian Laundrie's mother with her son while they were monitoring the family's home in the days after Laundrie's fiancée, Gabby Petito, was reported missing, a police spokesperson said.
NORTH PORT, FL・23 HOURS AGO