By Matt Fitzgerald
Sportsnaut
30 days ago 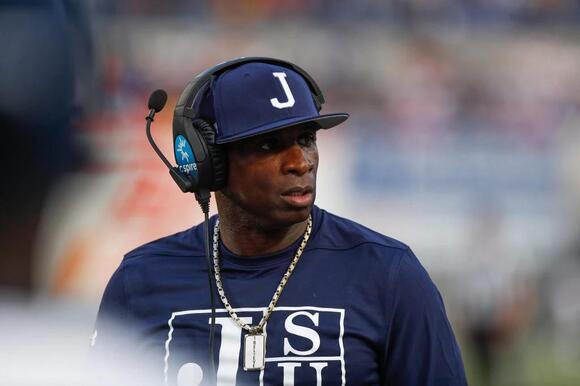 The Florida State Seminoles’ football program has gone through three straight losing seasons and are on course for a fourth following a 0-3 start to 2021, and rumors are swirling that Deion Sanders could eventually become the new head coach.

Pro Football Network’s Tony Pauline is reporting that Sanders has huge support in Tallahassee, and that in the spring, there was even talk of bringing “Prime Time” to Florida State to replace Mike Norvell :

“I asked, ‘What happens if Mike Norvell goes undefeated the rest of the season?’ My source told me, there’s still a very good chance they bring Sanders in. […] It’s been something that’s been talked about and I’ve heard about since we got into Spring Football earlier this year. Deion Sanders to Florida State is very real.

This is especially notable considering the fact that Norvell has four years remaining on a six-year contract. In order to bring in “Neon Deion” to replace him, the Seminoles would have to usher Norvell out with a high-cost buyout.

Sanders shined at Florida State as a defensive back and punt returner. His incredible athleticism and coverage skills led to a Hall of Fame NFL career, and since retiring from pro football, Sanders has remained around the game in various capacities.

After some time working in the media, it was clear Sanders wanted to go full-out into coaching. Now, he’s the head coach at Jackson State, seeking to build a unique legacy and boost the national profile of HBCU programs. His son, Shedeur Sanders, is a freshman and starts at quarterback for the Tigers. 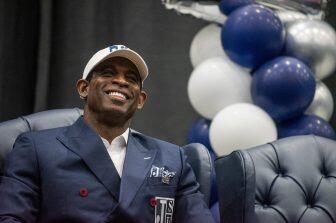 For Deion Sanders, the opportunity to restore his alma mater to prominence at the highest level of college football could be too tempting to pass up — even if his heart is pouring into everything he’s doing at Jackson State for now.

Florida State is in need of some juice, and there’s reason to believe Sanders can definitely recruit talent to Tallahassee. His resume speaks for itself, and it’s hard to envision a splashier move that’d have more merit behind it than hiring Sanders as the Seminoles’ new head coach.

Time will tell if this comes to pass, or if it’s a pipe dream being floated by Florida State sources desperate for a spark amid a down period for the program. Whatever the case may be, imagining Sanders strolling the Seminoles’ sidelines is fascinating.

Look I know him personally and I live in the hometown where he was born. Prime is certain very talented. So if wanted job at Florida State he could get it. He will be at JSU for the full term of his contract to coach his sons and turn the Historical Black College Sport program around.

No possible way he is hired. He has yes won 6 games as a head coach against the weakest teams in football and lost 4-5. Most of the complainers are not even boosters. Yes I am upset but the program can not afford another coach and I am a booster and season ticket holder of 41 years.

Former NFL legend and now-football coach Deion Sanders has long been in the spotlight for his athletic prowess. But it’s often his personal life that makes headlines. Jackson State’s football coach has made no secret of the breakdown of his first two marriages. While his last divorce was turned into public drama, his first marriage to Carolyne Chambers Sanders has intrigued football watchers for a while now. He’s now in a relationship with business mogul Tracey Edmonds, but it makes fans ask where his first ex-wife is. So we reveal all there is to know about Deion Sanders’ first wife in Carolyne Chambers Sanders’ wiki.
NFL・8 DAYS AGO
HBCU Gameday

Jackson State and Deion Sanders are back in the top 25 while two other HBCUs are receiving votes in the national poll. The post Deion Sanders and Jackson State crack top 25 appeared first on HBCU Gameday.
COLLEGE SPORTS・8 DAYS AGO
saturdaydownsouth.com

Deion Sanders must be having the time of his life, coaching his son Shedeur at Jackson State this season. On Saturday, against Alabama A&M, the Tigers are routing their opponents, leading 61-15 midway through the fourth quarter. Shedeur scored a touchdown in the game and then broke out a familiar...
NFL・10 DAYS AGO
Audacy

Dallas Cowboys CB Trevon Diggs is making an early case as this year’s NFL Defensive Player of the Year. He is currently leading the league in interceptions with six and is arguably the anchor for an improved Cowboys defense that has taken great leaps after being near the bottom of league in every statistic last season.
NFL・8 DAYS AGO

Deion Sanders and Jackson State took care of business on the field against Alabama A&M. But he left his opponent with a parting gift as well The post Deion Sanders gives opposing coach gift after win appeared first on HBCU Gameday.
COLLEGE SPORTS・10 DAYS AGO
theundefeated.com

JACKSON, Miss. — A couple of hours before Jackson State coach Deion Sanders leads his team on the field against Alabama A&M, he’ll place his pregame outfit on the floor in front of him and study it. He’ll scrutinize the shirt, the shorts, the shoes, the socks and the baseball...
NFL・12 DAYS AGO
The Spun

Prior to the 2021 college football season, the NCAA Division I Council voted to approve new rules allowing college athletes to transfer one time without having to sit out a year. Paired with an already-increasing usage of the transfer portal, this change is already beginning to alter the college football landscape.
NFL・12 DAYS AGO
Montgomery Advertiser

Alabama State coach Donald Hill-Eley had nothing but positive words for Jackson State coach Deion Sanders on Monday's Southwestern Athletic Conference conference call. "I think is a game changer as it relates to HBCU football," Hill-Eley said. "You have a man that has for 30 years built a platform of entertainment, and a persona that people like to see. Aflac commercials, all kind of stuff that's going on, that you can't, as a program compete with that part."
ALABAMA STATE・8 DAYS AGO

FRISCO - Trevon Diggs and Everson Walls and Deion Sanders have some things in common. That’s come in a hurry, to the point where Walls’ team record for interceptions in a single season is now in danger. Diggs intercepted his fourth and fifth passes of the season on Sunday as...
NFL・13 DAYS AGO
The Spun

Legendary NFL cornerback Deion Sanders dealt with some painful injuries over the course of his career. Few, if any, were more debilitating than turf toe. Sanders, who now coaches at Jackson State in Mississippi, famously dealt with a turf toe injury toward the end of his time with the Dallas Cowboys. The eight-time Pro Bowler opened up about his foot injuries while talking with Dan Patrick back in 2018.
NFL・6 DAYS AGO
saturdaydownsouth.com

While the transfer portal has benefitted a lot of football programs, some coaches, like Jackson State head coach Deion Sanders, are still not a fan of it and says it has had a negative effect on recruiting. Here is what Sanders said via Football Scoop. “Recruiting is different now,” Sanders...
HIGH SCHOOL・12 DAYS AGO
Montgomery Advertiser

Model and author Brittany Renner returned to Jackson State for homecoming this year. Renner played women's soccer at JSU. She was the MVP of 2010 SWAC Women's Soccer All-Tournament Team and led Jackson State to a 2-0 win against Mississippi Valley State for a berth in the 2010 NCAA Women's Soccer Tournament.
COLLEGE SPORTS・3 DAYS AGO

Jackson State, in its first full season under NFL Hall of Famer Deion Sanders as its coach, is off to a 3-1 start and, perhaps not surprisingly, playing suffocating defense. The Tigers, however, are still trying to find their footing on offense. After winning their opener against Florida A&M, 7-6,...
JACKSON, MS・11 DAYS AGO
dmagazine.com

I’m Tired of Fighting It: Trevon Diggs Is the Best Cowboys Cornerback Since Deion Sanders

I’ve had this thought for a couple of weeks. At first, I hesitated to say it out loud because though I knew what I was seeing, it somehow felt wrong. Surely, I couldn’t be right. Then, last week — after Trevon Diggs grabbed a pick-six that all but extinguished any hope the Eagles had of beating the Cowboys — I finally said it, even if with some caution. And now, after another win, I’m more confident: Diggs is the best cornerback the Cowboys have had since Deion Sanders.
NFL・14 DAYS AGO
The Spun

Deion Sanders and the Jackson State Tigers will head to Huntsville, Alabama this upcoming weekend to take on Alabama A&M in an intriguing SWAC match-up. The game is still a handful of days away, but the head coaches from both programs have already started to take shots at one another.
HUNTSVILLE, AL・14 DAYS AGO
WJTV 12

Coming off a much-needed bye week, Deion Sanders's Tigers return to the gridiron for their first October test on the road.
ALABAMA STATE・11 DAYS AGO
Sports Illustrated

A surprise scholarship and a record turnout for attendance, Coach Prime and the Tigers keep it rolling.
ALABAMA STATE・3 DAYS AGO
footballscoop.com

His 2021 class was considered the best recruiting haul in school history and one of the all-time best at the Football Championship Subdivision level. Then, he added nearly 20 additional players with Power 5 and/or major college experience, including transfers from Alabama, Auburn, Florida, Florida State, Georgia Tech, Illinois, Missouri, Tennessee and the University of Southern California, among others.
COLLEGE SPORTS・12 DAYS AGO
247Sports

The Jackson State Tigers coached by Deion Sanders are 3-1 entering this weekend’s matchup against Alabama A&M. Ahead of the game, Alabama A&M coach Connell Maynor poked fun at Sanders’ recent foot surgery, which required him to use a scooter to get around. “Hey, Coach Sanders, I hurt my ankle...
NFL・14 DAYS AGO