By Carla Antoine
SaintsNewsNetwork
28 days ago 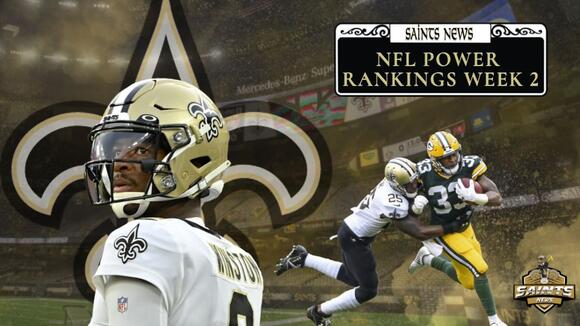 A new legacy is dawning. Jameis Winston could not have written a better opening to his inaugural season as Saints’ starting quarterback. The New Orleans Saints brought the hot sauce on offense and defense and kept the heat on Aaron Rodgers on Sunday’s opener. Rodgers’ offseason saga may have been too much of a distraction for Green Bay after all.

Green Bay did not score a touchdown while Rodgers and his team looked discombobulated.  Jameis Winston had a stellar performance with 5 touchdowns and rushed 6 times for 37 yards. Moving on from the Drew Brees era did not seem to be a problem for Winston, who played stellar in one of the best games on Sunday. Drew Brees weighed in as he commentated the game,

“I guess apparently this is what the Saints have been missing over those last couple of years...Let’s launch them, baby! Let’s go! Drew Brees

There is a big shakeup in the top 5 after week 1 as the top two remain on each other’s heels. The Black and Gold soared to the top of the NFC South and debuts in the top five this week.

Tom Brady continues to impress even in year 22 in the NFL and at age 44. In the final minute, the future Hall of Famer had a signature game-winning drive to set up a last-second field goal, giving the Tampa Bay Bucs a 31-29 win over the Dallas Cowboys. Brady wasn’t the only player who performed well.

Veterans Antonio Brown and Chris Godwin led the way on offense with 121 and 105 receiving yards, respectively, each with a touchdown. The Bucs remain at the top spot with another impressive win.

The Kansas City Chiefs are primed for another electric year on offense after defeating the Cleveland Browns 33-29. Patrick Mahomes has shown no signs of slowing down, throwing for 337 yards with 3 touchdowns and zero interceptions, and Tyreek Hill put up another unreal game with 197 receiving yards on 11 receptions with a touchdown.

This was an impressive comeback win against a Browns team that tried to make a statement early. The Chiefs’ defense is still the weak link, but there appear to be no other serious contenders for the AFC crown.

The Los Angeles Rams’ offseason move to sign quarterback Matthew Stafford seems to pay off as the former Detroit Lion led the team to an explosive 34-14 victory over the Chicago Bears. Stafford finished the game with 321 yards and 3 touchdowns while receiver Cooper Kupp racked up 108 yards to go along with a touchdown.

The star-studded defense also stepped up and provided 3 sacks and an interception. The Rams were one of the more dangerous teams in the NFC last year. Can they take the leap with an established quarterback?

Even in a loss, the Cleveland Browns showed the NFL that they are one of the best teams in the league. Cleveland came right out of the gate looking to make a statement against the dangerous Kansas City Chiefs and scored a touchdown with a 2-point conversion on their first drive.

The Browns led 22-10 going into halftime but ultimately fell late in the second half. What stood out the most was Cleveland’s confidence in taking a shot at Mahomes and the Chiefs. This confidence should be able to carry the Browns deep into the playoffs.

The New Orleans Saints proved the doubters wrong in a commanding 38-3 win over the Green Bay Packers. New Orleans proved they can still be one of the best teams in the NFL. The defense led the way by handing Aaron Rodgers the worst loss in his career and racking up 2 sacks and 2 interceptions.

The Saints caused Rodgers to sit out early in the 4th quarter as the Packers couldn’t get anything going on offense. Jameis Winston also looked calm and collected in his first start as a Saint, throwing for 5 touchdowns on only 20 passing attempts. The Saints look locked in and ready to win.

Winston’s breakout performance for the season opener shows he is poised to lead the Saints to another winning season and another legitimate run to secure another Lombardi Trophy. The Saints take on the Panthers at Carolina on Sunday at noon CST.

The return of Odell Beckham Jr. from his near year-long absence due to an ACL injury was slated to be a game-changing development for the Cleveland Browns offense. However, in the most recent two games of the 2021 NFL season, this hope has not yet come to fruition. In the...
NFL・9 DAYS AGO
Larry Brown Sports

Aaron Rodgers has drawn attention this year for his long hair and interesting style. Now we know the supposed reason for the Green Bay Packers quarterback’s long hair. Rodgers joined “The Pat McAfee Show” on Tuesday for his weekly guest appearance. During his appearance, he talked about his hair and revealed his reason for growing it out.
NFL・25 DAYS AGO
The Spun

Colin Kaepernick was a major topic of conversation following the 49ers’ loss to the Green Bay Packers on Sunday night. Kaepernick, of course, had plenty of success against Green Bay during his professional career. He shredded the Packers defense in the NFL’s 2012 Divisional Round. It might have been the best game of Kaepernick’s career.
NFL・20 DAYS AGO
Larry Brown Sports

In a somewhat surprising move earlier this week, the Dallas Cowboys released linebacker Jaylon Smith — a 2016 second-round pick out of Notre Dame and one-time Pro Bowler. The reason why Dallas cut Smith quickly became evident, however. Despite owing him $7.2 million, the Cowboys made the decision based on...
NFL・9 DAYS AGO

JR on Rodgers: 'I'm sick of the guy now, just shut up'

The Green Bay Packers have silenced their doubters. Well, at least for a week. A primetime game at Lambeau Field proved to be the remedy to the team's season-opening woes, as the Packers roughed-up the Detroit Lions, 35-17, on Monday night. Following the game, Aaron Rodgers -- who threw for four touchdowns -- told reporters that it was nice to "get the trolls off our backs."
NFL・26 DAYS AGO
The Spun

The Green Bay Packers will be without a notable starter on defense tonight. Green Bay announced on Sunday afternoon that veteran defensive back Kevin King has been added to the OUT list for Sunday night’s game. King, 26, is dealing with an illness, according to the team. “Kevin King (illness)...
NFL・21 DAYS AGO
Insider

CLEVELAND (WJW) — Emily Mayfield, who’s married to Browns QB Baker Mayfield, has a message for Cleveland fans after yesterday’s 47-42 loss to the Los Angeles Chargers. In her Instagram stories, she says Cleveland “fans” who are blaming Baker for the loss need to wake up. “You truly don’t know what you have. I have […]
NFL・6 DAYS AGO

Brett Favre hasn’t played in an NFL game since 2010, but the legendary quarterback continues to be a part of the football world. The former Green Bay Packers, Minnesota Vikings and New York Jets quarterback talks about the league on Sirius XM NFL Radio each week. Just this past week, Favre had a calming message for Packers fans following the blowout loss in Week 1.
NFL・28 DAYS AGO
The Big Lead

The Buffalo Bills beat the Kansas City Chiefs, 38-20, on Sunday night. Patrick Mahomes was sacked twice and threw two interceptions as the Chiefs fell to 2-3 on the season. The game was never really close and Mahomes' fiancée, Brittany Matthews, did everything she could to help KC by tweeting through it.
NFL・6 DAYS AGO
ClutchPoints

Justin Fields fires strong warning to Aaron Rodgers ahead of Bears vs. Packers

Chicago Bears quarterback Justin Fields is not worried about Green Bay Packers superstar Aaron Rodgers. Not that he’s confident he’s better, but he knows his focus should not be on individual battles. Ahead of their Week 6 showdown with the Packers, the Bears youngster was asked about his thoughts on...
NFL・4 DAYS AGO
The Spun

Cleveland Browns quarterback Baker Mayfield will always have his critics. But one ESPN analyst had an especially harsh message for the former No. 1 overall pick. On Friday’s edition of Get Up, NFL analyst Bart Scott didn’t hold back in criticizing the Browns quarterback. Scott called Mayfield “the most replaceable QB” in the NFL and believes that nobody does less with more than him.
NFL・9 DAYS AGO

With the Packers off to a 4-1 start this season, the Aaron Rodgers drama that dominated the offseason seems like a distant memory. However, as soon as the 2021 season ends, there's a good chance that last year's drama is going to pick up right where it left off and that's because Rodgers still doesn't necessarily seem interested in staying in Green Bay.
NFL・3 DAYS AGO
FanSided

The Cleveland Browns announced today that quarterback, Baker Mayfield, has a partially torn labrum in his non-throwing shoulder. Should there be a concern?. The questions have been mounting for the Cleveland Browns the last two weeks, was Baker Mayfield’s shoulder healthy? He suffered a big hit vs. the Houston Texans and hasn’t really looked right since.
NFL・10 DAYS AGO
CowboyMaven

After the surprising news that linebacker Jaylon Smith would be cut, questions began to swirl as to why the Dallas Cowboys would part ways with one of its once-promising future stars. We now have one answer: Early Thursday morning, Smith finalized his new deal - a one-year contract - with...
NFL・10 DAYS AGO
Bleacher Report

While coaches resist the urge to hit the panic button amid a slow start to the season, they'll make necessary changes to pull their teams out of a rut or replace a weak link on the roster. Every week, clubs have to tweak starting lineups because of injuries, but in...
NFL・11 DAYS AGO

Patrick Mahomes owns up to Justin Herbert remark after Chargers, Chiefs game: 'I guess I believe it'

Patrick Mahomes engaged in a bit of friendly trash-talking over the summer but was forced to own up to it when Justin Herbert and the Los Angeles Chargers handed the Kansas City Chiefs their second loss of the season on Sunday. While playing at the American Celebrity Golf Championship in...
NFL・20 DAYS AGO
The Spun

Baker Mayfield’s wife had a blunt message for Cleveland Browns fans – and the rest of the NFL – following last weekend’s crushing loss to the Los Angeles Chargers. The Browns lost a heartbreaker to the Chargers in Los Angeles, falling 47-42. While Mayfield played well in that game, he couldn’t get it done late, leading to a larger conversation about his ability to lead a team to a Super Bowl.
NFL・19 HOURS AGO
detroitsportsnation.com

Don’t be surprised if Sunday’s matchup between the Cleveland Browns and Arizona Cardinals is a preview of the Super Bowl as both teams have been very good so far in 2021. That being said, when the Browns take the field on Sunday, they will be without one of their top players, Nick Chubb.
NFL・2 DAYS AGO
Chicago Tribune

5 things to watch for when the Chicago Bears host the Green Bay Packers, including matching wits with Aaron Rodgers and the 1st taste of the rivalry for Justin Fields — plus our Week 6 predictions

Chicago Bears quarterback Justin Fields will get his first taste of the rivalry with the Green Bay Packers on Sunday at Soldier Field. The Packers (4-1) arrive having won four straight, putting them atop the NFC North. The Bear (3-2) have won two in a row, including a 20-9 upset of the Las Vegas Raiders in Week 5. As kickoff approaches, here’s our snapshot look at the game. Chicago Bears (3-2) ...
NFL・2 DAYS AGO