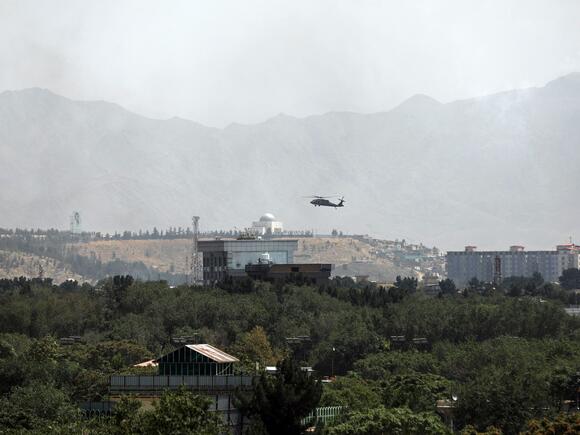 The CIA sent urgent warnings that civilians were present just seconds before the US launched an airstrike in Afghanistan in retaliation for the Kabul airport bombing, CNN reported .

The warning, however, came too late.

Initially, US officials said the airstrike had targeted a suicide car bomber linked to ISIS-K and thwarted a potential attack on the Kabul airport.

"We are confident we successfully hit the target. Significant secondary explosions from the vehicle indicated the presence of a substantial amount of explosive material," US Central Command spokesman US Navy Capt. Bill Urban said in a statement at the time.

"We are assessing the possibilities of civilian casualties, though we have no indications at this time. We remain vigilant for potential future threats," Urban continued.

The airstrike was meant to be a retaliatory attack on ISIS-K in response to the airport bombing, President Joe Biden indicated.

ISIS-K is the group believed to be responsible for a devastating Kabul airport attack a week prior to the US airstrike. At the airport, the ISIS-K attack left 13 US service members and an estimated 169 Afghans dead in the middle of tense evacuation efforts following the Taliban's takeover of the country.

Earlier this week, the US military revealed that an internal investigation found the US airstrike in retaliation for the Kabul airport bombing had actually killed innocent civilians .

"This strike was taken in the earnest belief that it would prevent an imminent threat to our forces and the evacuees at the airport, but it was a mistake and I offer my sincere apology," Gen. Kenneth McKenzie, the head of US Central Command, told reporters at the Pentagon.

"I am now convinced that as many as 10 civilians, including up to 7 children, were tragically killed in that strike," he said.

Chairman of the Joint Chiefs of Staff Gen. Mark Milley, who had previously characterized the drone strike as a "righteous strike," reversed course later. Following the results of the investigation, Milley said in a statement that the strike was a "horrible tragedy of war."

"It's heart wrenching and we are committed to being fully transparent about this incident," Milley added.

The death of Iranian Gen. Qassem Soleimani was part of a deliberately 'disproportional response' because he crossed a 'red line' in killing an American and ordering an attack on the U.S. embassy in Baghdad, according to a new insider account of the Trump White House. In his new book, Gen....
MILITARY・7 DAYS AGO
Newsweek

The Russian president told a forum in Sochi that the U.S. should still take responsibility for its military withdrawal.
POLITICS・4 DAYS AGO
MilitaryTimes

Combined Russian and Chinese military power will approach, but not exceed US: report

The Sino-Russian relationship will continue to strengthen due to the continuation of U.S. policies towards those two nations, and that “aggregate Chinese and Russian power” will “continue to approach, but not exceed” U.S power through 2022, according to a new Rand Corp. report. The report’s authors describe the growing relationship...
MILITARY・13 DAYS AGO

"As a superpower, the United States has a major responsibility and should be held accountable," Fawzia Koofi said.
U.S. POLITICS・4 DAYS AGO
Fox News

After President Biden said at a CNN town hall last night he would defend Taiwan from an attack by China, the Chinese Foreign Ministry said there is "no room for compromise" on its territorial claims on the island. The latest trading of barbs between the U.S. and China over Taiwan...
FOREIGN POLICY・4 DAYS AGO
globalvoices.org

As the Taliban removed ethnic Uyghur militants from the border zone between Afghanistan and China, observers said there could be a revived policy coordination between the new leadership in Kabul and the Communist Party in Beijing. According to a UN report, there are 500 Uyghur militants among the Taliban. If...
POLITICS・18 HOURS AGO
Fox News

Can the US defend against Chinese missile attack?

"If we can use stealthy ways, like underwater explosions, to destroy the ports, we can kill off the enemy's war potential," a Chinese officer said.
MILITARY・1 DAY AGO
editorials24.com

A top al-Qaida leader is dead after a US drone strike in Syria, the military announced Friday. Abdul Hamid al-Matar was killed by the airstrike in the northwest section of the country, according to Army Maj. John Rigsbee, a spokesman for U.S. Central Command. “The removal of this al Qaeda...
MILITARY・3 DAYS AGO
Daily Mail

Sen. Jim Inhofe called on Defense Secretary Lloyd Austin to suspend the Pentagon's vaccine mandate, which he said had been implemented 'at the expense of readiness and morale.'. 'At a time when our adversaries continue to increase their quantitative and qualitative advantage against our forces, we should seek to ensure...
CONGRESS & COURTS・7 DAYS AGO

The following is the Oct. 21, 2021 Congressional Research Service report, Emerging Military Technologies: Background and Issues for Congress. Members of Congress and Pentagon officials are increasingly focused on developing emerging military technologies to enhance U.S. national security and keep pace with U.S. competitors. The U.S. military has long relied upon technological superiority to ensure its dominance in conflict and to underwrite U.S. national security. In recent years, however, technology has both rapidly evolved and rapidly proliferated—largely as a result of advances in the commercial sector. As former Secretary of Defense Chuck Hagel observed, this development has threatened to erode the United States’ traditional sources of military advantage. The Department of Defense (DOD) has undertaken a number of initiatives to arrest this trend. For example, in 2014, DOD announced the Third Offset Strategy, an effort to exploit emerging technologies for military and security purposes as well as associated strategies, tactics, and concepts of operation. In support of this strategy, DOD established a number of organizations focused on defense innovation, including the Defense Innovation Unit and the Defense Wargaming Alignment Group.
CONGRESS & COURTS・4 DAYS AGO
Business Insider

To ensure US special operators can operate against a more capable enemy, SOCOM wants to give its biggest planes new weapons and capabilities.
AEROSPACE & DEFENSE・1 DAY AGO
The Jewish Press

The Israeli Air Force (IAF) reportedly dropped leaflets over southern Syria on Monday warning Syrian Army soldiers to refrain from cooperating with Iranian-backed Shia and Hezbollah forces operating against Israel in the area, several sources reported. According to a copy of the leaflets seen by TPS, the IDF warned the...
MILITARY・1 DAY AGO
americanmilitarynews.com

US troops secretly tipped off about Iran-backed attack, bomb fragments found where they sleep, says report

After receiving a tip about an imminent Iranian-backed drone and rocket attack on a base in Syria last week, U.S. forces housed there quietly evacuated the base, unnamed military officials told Fox News on Monday. Upon returning to the base, U.S. troops reportedly found fragments from exploded munitions in places where they slept and stood guard.
MILITARY・16 HOURS AGO
americanmilitarynews.com

This article was originally published by Radio Free Europe/Radio Liberty and is reprinted with permission. Afghan military pilots who fled to Tajikistan when the Taliban seized power in Kabul say the militant group is pressuring them to return to Afghanistan by threatening to kill their relatives. Trained by the United...
MILITARY・1 DAY AGO
Fox News

US military was tipped off about Iran-backed attack on troops in Syria, saving lives

EXCLUSIVE: The U.S. military was tipped off prior to an Iran-backed drone attack on a base in Syria housing American forces. Roughly 200 U.S. troops were evacuated by C-130 transport planes prior to the attack last week, while about two dozen remained at the small base, one military official told Fox News. While it was not clear what type of intelligence led to the tip, multiple officials say it saved lives.
MILITARY・1 DAY AGO
CNN

(CNN) — The Biden administration has told lawmakers that the US is nearing a formalized agreement with Pakistan for use of its airspace to conduct military and intelligence operations in Afghanistan, according to three sources familiar with the details of a classified briefing with members of Congress that took place on Friday morning.
FOREIGN POLICY・4 DAYS AGO
POLITICO

Iran behind drone attack on U.S. base in Syria, officials say

There were no reported injuries or deaths as a result of the attack.
MILITARY・1 DAY AGO