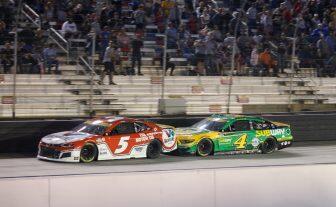 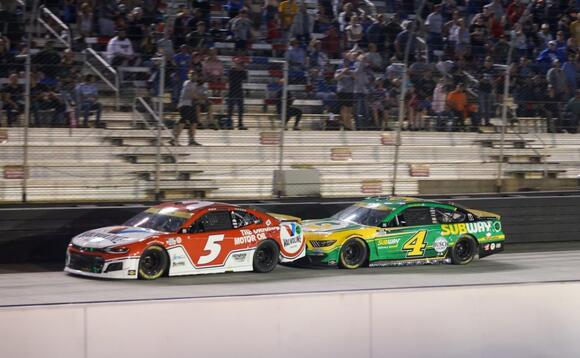 Kyle Larson added to his NASCAR Cup Series-leading win total on Saturday night when he passed Kevin Harvick for the lead with four laps to go to win the Bass Pro Shops Night Race at Bristol Motor Speedway in Tennessee.

Larson’s sixth win of the season came by fractions of a second over Harvick.

Harvick remains winless this season and finished second, .227 seconds behind Larson in the second race of the season at Bristol. 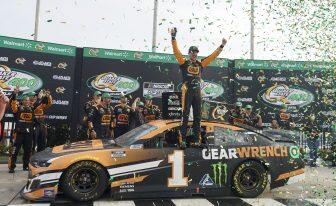 William Byron, Larson’s teammate at Hendrick Motorsports, finished third to squeeze his way into the Round of 12 of the Playoffs.

Two-time champion Kyle Busch appeared to be cruising into the next round. But with 45 laps to go, his Joe Gibbs Racing car had a tire go down. He had to pit and when he returned to the track, he was just two points above the cutline.

With 26 laps to go, Bell scraped the wall and had to pit. His seemingly comfortable position vis a vis advancing to the Round of 12 vanished as he was just 10 points above the cutline.

But the key battle for the final berth in the second round of the Playoffs saw Reddick, Byron and Almirola just a couple of points apart over the final laps.

Byron finished two points ahead of Reddick and Almirola.

NASCAR drivers Chase Elliott and Kevin Harvick have been feuding for a while, but some of the antics between the two have bordered on the outright dangerous – and NASCAR has had enough. According to Jenna Fryer of the Associated Press, NASCAR engaged the two drivers and issued a serious...
MOTORSPORTS・10 DAYS AGO
FanSided

The Kevin Harvick we saw in the round of 12 of the NASCAR Cup Series playoffs was nothing like the one we saw in the round of 16. Kevin Harvick infamously failed to qualify for the Championship 4 in the 2020 NASCAR Cup Series playoffs, despite leading the series with nine wins and leading the standings ahead of each of the first three rounds of the four-round, 10-race postseason.
MOTORSPORTS・13 DAYS AGO
Racing News

Kyle Busch: “The 4 was bout running over everybody.”. Several weeks ago, Chase Elliott and Kevin Harvick got into each other at Bristol Motor Speedway while racing for the lead. They engaged in a heating pushing match and many conversation after the race. However, for Harvick, things were left unfinished....
CHARLOTTE, NC・12 DAYS AGO
Racing News

Hear from the sanctioning body as the feud continued in the NASCAR Playoff race at the Charlotte Motor Speedway Road Course. Several weeks ago, Kevin Harvick got loose under Chase Elliott as they ran three wide through lap traffic while racing for the lead at the action track of Bristol Motor Speedway. Harvick took over the lead as Elliott suffered a flat tire after the contact.
CHARLOTTE, NC・12 DAYS AGO

NASCAR has gotten sick of the nonsense between Chase Elliott and Kevin Harvick. The bad blood between the veteran driver Harvick and Elliott, the defending NASCAR Cup Series champion, hasn’t shown any signs of dissipating, even if the fireworks haven’t been quite as bright as they were a couple weeks ago. But the sport’s governing body clearly has had enough.
MOTORSPORTS・10 DAYS AGO
accesswdun.com

CONCORD, N.C. - Sunday’s NASCAR Cup Series race featured a frequent winner, a couple of unlikely heroes and occasional villainy. Kyle Larson took the checkered flag after 109 laps at the Charlotte Motor Speedway infield road course to win for the seventh time this season and advance to the Round of 8 in the NASCAR Cup Series Playoffs.
CONCORD, NC・13 DAYS AGO
abc17news.com

CONCORD, N.C. (AP) — Kyle Larson rallied from early electrical issues Sunday to win for the seventh time this season and storm into the third round of NASCAR’s playoffs. Larson’s victory on The Roval at Charlotte Motor Speedway ended a topsy-turvy day for Hendrick Motorsports. Larson and reigning Cup champion Chase Elliott moved into the round of eight but Alex Bowman and William Byron were eliminated. Elliott was nearly sabotaged by as Kevin Harvick sought payback from their feud three weeks ago. Harvick wrecked Elliott, but it came back around when Harvick wrecked himself out of the playoffs as Elliott later closed in on his bumper.
CONCORD, NC・13 DAYS AGO
NBC Sports

Kyle Larson claimed his seventh win of the NASCAR Cup Series season in Sunday’s Round of 12 playoff elimination race at the Charlotte Motor Speedway Roval. Larson’s car suffered early electrical issues that forced his No. 5 Hendrick Motorsports team to change the battery and alternator belt. But the regular...
MOTORSPORTS・13 DAYS AGO

Kyle Larson took the win Sunday at the Charlotte “Roval” in the Nascar Cup Series. Four drivers were eliminated from championship contention with four races remaining in the season. Kevin Harvick, Christopher Bell and Hendrick Motorsports drivers William Byron and Alex Bowman were eliminated. Eight drivers are still in the championship run for the next three races beginning this Sunday in Texas.
MOTORSPORTS・13 DAYS AGO
Detroit News

Kevin Harvick out to stop earliest playoff elimination of career

Concord, N.C. — This is it for Kevin Harvick, a winner of nine races just last year and now on the verge of his earliest career playoff knockout. The steadiest guy in the garage is winless this season — he’s on a 38-race losing streak — and needs a big day at Charlotte Motor Speedway to avoid playoff elimination.
CONCORD, NC・14 DAYS AGO
outsider.com

Kyle Larson is your NASCAR Bank of America Roval 400 winner. He claimed victory on the Charlotte Motor Speedway Road Course. The Cup Playoff cutoff race ran 252.88 miles and saw its fair share of drama, including a Chase Elliot-Kevin Harvick collision. Kyle Larson came into the race with plenty...
MOTORSPORTS・13 DAYS AGO
CharlotteObserver.com

Kyle Larson celebrates his seventh win of the season and advancement to the Round of 8 with a burnout for the fans.
13 DAYS AGO
alabamanews.net

NASCAR has ordered a cease fire in the feud between Chase Elliott and Kevin Harvick, warning of severe consequences if the two drivers continue to tangle on the track. The demand to stop the shenanigans comes as Elliott moves on to the third round of the playoffs, still eligible to win a second consecutive Cup title. Harvick crashed himself out of title contention last week as he evaded Elliott on his rear bumper at Charlotte.
MOTORSPORTS・8 DAYS AGO
Albany Herald

The Autotrader EchoPark Automotive 500 at Texas Motor Speedway had dramatic ups-and-downs all Sunday afternoon with the victorious exception of Kyle Larson, who absolutely dominated the race — leading 256 of 334 laps and holding off the field on seven different re-starts in the final 125 laps alone. Larson’s win...
MOTORSPORTS・6 DAYS AGO
FOX Sports

CHARLOTTE, N.C. — Kyle Larson wasn't thinking about trying to record his seventh victory of the season when his alternator belt malfunctioned early in the NASCAR Cup Series elimination race Sunday. He was thinking more about potentially being eliminated from the playoffs. But his team fixed the issue, and he...
CHARLOTTE, NC・13 DAYS AGO

Sunday’s Bank of America ROVAL 400 featured a frequent winner, a couple of unlikely heroes and occasional villainy. Kyle Larson took the checkered flag after 109 laps at the Charlotte Motor Speedway Road Course to win for the seventh time this season and advance to the Round of 8 in the NASCAR Cup Series Playoffs.
CHARLOTTE, NC・13 DAYS AGO
mrn.com

The most dominant driver in the NASCAR Cup Series will be racing for the championship. Kyle Larson won Sunday’s Round of 8 opener at Texas Motor Speedway and became the first driver to clinch a spot in the Championship 4 finale on Nov. 7 at Phoenix Raceway. That gives Larson...
TEXAS STATE・6 DAYS AGO
Johnson City Press