Tottenham vs Chelsea live stream: How to watch Premier League fixture online and on TV today 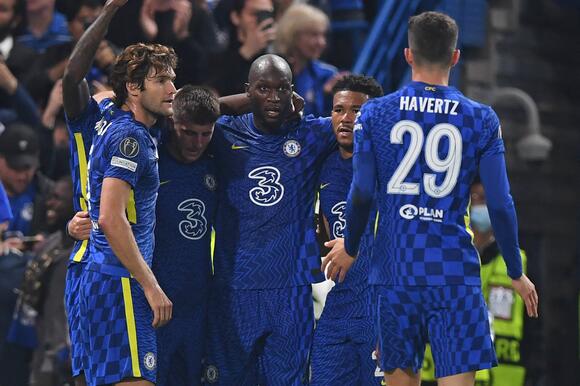 Chelsea will look to continue their unbeaten start to the Premier League season against a Tottenham Hotspur side aiming to bounce back from a heavy loss at Crystal Palace last weekend.

Romelu Lukaku scored with each of his two shots on target as a clinical Chelsea team dispatched Aston Villa 3-0 at Stamford Bridge last weekend to move to 10 points in the Premier League.

The Belgian striker was then on target again as the Blues won their opening match of the Champions League against Zenit St Petersburg on Tuesday, and the 28-year-old has now scored four times in as many games following his return to Stamford Bridge.

Tottenham’s perfect start to the Premier League season was brought to an abrupt end following the 3-0 defeat at Palace but Nuno Espirito Santo has won both of his opening home games in charge of the club, including a 1-0 win over Manchester City on the opening weekend of the season.

Here’s all the information you need ahead of the Premier League fixture.

The match will kick off at 4:30pm BST on Sunday 19 September.

It will be shown live on Sky Sports Main Event and Premier League, with coverage staring at 4pm. If you’re not a Sky customer you can grab a NOWTV Day Pass here to watch without a subscription.

Spurs are set to be without Son Heung-min and Eric Dier due to injury, while Japhet Tanganga is serving his one-match suspension after he was sent off at Palace last weekend.

Nuno was then dealt a further blow as Lucas Moura and Steven Bergwijn suffered injuries during the 2-2 draw against Stade Rennes on Thursday, with both players set to be ruled out of the meeting with Chelsea today. Bryan Gil could come in for his first Premier League start.

The Spurs manager is set to be boosted, however, by the return of Davinson Sanchez, Cristian Romero and Giovani Lo Celso following the end of their quarantine. Due to the absence of Dier and Tanganga, Nuno may be forced to put Sanchez and Romero straight into his starting team in the centre of defence.

Chelsea manager Tuchel could have N’Golo Kante available if the Frenchman recovers from an ankle injury suffered against Liverpool before the international break.

The form of Mateo Kovacic and Jorginho could see Tuchel be patient with Kante’s return, however, while Christian Pulisic remains sidelined with an ankle injury picked up on international duty with the USA.

It’s hard to imagine anything other than a Chelsea win given the form of Romelu Lukaku and the number of absences in the Spurs squad. Thomas Tuchel’s side haven’t played anywhere near their best over their last two matches but still picked up wins over Villa and Zenit - and it’s Lukaku who has been the difference. He could be set for another big performance against an untested centre-back partnership. Tottenham 0-2 Chelsea

Manchester United have crashed to an embarrassing 5-0 defeat to Liverpool to pile the pressure on manager Ole Gunnar Solskjaer.Mohamed Salah scored a hat-trick at a shellshocked Old Trafford, with some home fans having already left before a miserable afternoon was made worse by the dismissal of half-time substitute Paul Pogba for a foul on Naby Keita.Here, the PA news agency charts eight other heavy losses United have suffered in the Premier League.Newcastle 5 Manchester United 0, October 20, 1996Philippe Albert’s stunning lob over Peter Schmeichel capped a thumping win as Kevin Keegan’s men gained some revenge having lost the...
PREMIER LEAGUE・2 DAYS AGO
The Independent

Nuno Espirito Santo does not think his side have a creativity problem, despite Tottenham not having a shot on goal in the second half of the 1-0 loss at West Ham Spurs slipped to a fourth London derby defeat of the season, having already lost to Crystal Palace Chelsea and Arsenal, as they were undone by Michail Antonio’s 78th-minute goal at the London Stadium.Antonio continued his enjoyment of playing against Tottenham as he scored his sixth goal against them – more than any other club.Spurs, who rested their entire starting XI in their midweek Europa Conference League defeat at...
PREMIER LEAGUE・2 DAYS AGO
AFP

Ole Gunnar Solskjaer rued his "darkest day" as Manchester United manager after Mohamed Salah's hat-trick swept Liverpool to a stunning 5-0 win over their arch rivals at Old Trafford on Sunday. "It is not easy to say something apart from it is the darkest day I have had leading these players," Solskjaer said.
PREMIER LEAGUE・2 DAYS AGO

Paris Saint-Germain defender Marquinhos has suggested that Chelsea were interested in signing him this summer, but that the French club put an immediate end to any approach.Marquinhos has represented PSG since 2013, playing under Thomas Tuchel from 2018 until 2020.The German coach joined Chelsea at the start of this year and was seemingly keen on getting Marquinhos to join him at Stamford Bridge in the summer transfer window.When asked about Chelsea’s interest in him, Marquinhos told Le Parisien: “No! It wasn’t even an offer. In fact, [PSG] blocked talks straight away. “It shows the faith they have in me,...
PREMIER LEAGUE・14 HOURS AGO
The Independent

Chelsea vs Southampton prediction: How will Carabao Cup tie play out tonight?

Chelsea welcome Southampton to Stamford Bridge in the Carabao Cup round of 16 this evening. The Blues are coming off the back of an almighty victory against Norwich City at the weekend, with Mason Mount scoring a hat-trick in a 7-0 rout, which maintained their one-point lead at the top of the Premier League. Thomas Tuchel will be keen to claim more silverware after last season’s Champions League triumph but will almost certainly heavily rotate his side tonight ahead of next weekend’s visit to Newcastle. Southampton have endured a difficult start to their own campaign, with just one win...
PREMIER LEAGUE・5 HOURS AGO
The Guardian

Arsenal 2-0 Leeds United: Carabao Cup fourth round – as it happened

Minute-by-minute report: Calum Chambers scored immediately on arrival as a second-half substitute, as Arsenal made it through to the last eight. Scott Murray was watching.
PREMIER LEAGUE・2 HOURS AGO
The Independent

Jay Rodriguez believes Harry Kane is the best striker in the country at the moment as Burnley prepare to host Tottenham in the Carabao Cup on Tuesday.The Burnley forward has had limited opportunities this season, and has yet to score a Premier League goal with his last two appearances coming off the bench.Kane has eight goals for Tottenham already this season, and earned the praise of his countryman.“I feel he is (the best in the country),” said Rodriguez, who was once linked with the England squad.“I feel like he’s got everything as a striker. As a character, as a person...
PREMIER LEAGUE・1 HOUR AGO

Rio Ferdinand admits he 'wouldn't be happy' with Paul Pogba and his recent public outburst had he been his team-mate. The Frenchman spoke candidly in a post-match interview after Manchester United's 4-2 defeat at Leicester City. Speaking to the BBC after their loss at the King Power Stadium - their...
PREMIER LEAGUE・7 DAYS AGO
chatsports.com

Rio Ferdinand has blasted Manchester United's lack of 'unity' and pressing ability after a hugely disappointing 4-2 defeat against Leicester on Saturday. The Red Devils were outclassed, outfought and outplayed as Brendan Rodgers' side took a fully deserved three points at the King Power. And iconic former defender Ferdinand declared...
PREMIER LEAGUE・8 DAYS AGO
NJ.com

Manchester City, led by Belgian midfielder Kevin De Bruyne, faces Burnley in a Premier League match at Etihad Stadium in Manchester, England, on Saturday, October 16, 2021 (10/16/21). Fans can watch the match exclusively with Peacock. Here’s what you need to know:. What: English Premier League. Who: Manchester City vs....
MANCHESTER TOWNSHIP, NJ・10 DAYS AGO
NJ.com

Liverpool faces Watford in an English Premier League match at Vicarage Road in Watford, England, on Saturday, October 16, 2021 (10/16/21). Fans can watch the match exclusively with Peacock. Here’s what you need to know:. What: English Premier League. Who: Watford vs. Liverpool. When: Saturday, October 16, 2021. Time: 7:30...
PREMIER LEAGUE・10 DAYS AGO

Arsenal, led by forward Pierre-Emerick Aubameyang, faces Crystal Palace in an English Premier League match at Emirates Stadium in London, England, on Monday, October 18, 2021 (10/18/21). Fans can watch the match with a subscription to streaming service Peacock. Here’s what you need to know:. What: English Premier League. Who:...
PREMIER LEAGUE・8 DAYS AGO
The Independent

Youri Tielemans showed why Leicester are desperate to tie him to a new contract and James Maddison scored his first goal of the season as the Foxes sank Brentford 2-1.Belgium international Tielemans hit a stunning long-range strike to open the scoring for Brendan Rodgers’ side.Mathias Jorgensen hauled Brentford level but Tielemans then helped tee up Maddison’s first goal since February to secure three points for the visitors.Victory rounded off a satisfying week for Leicester boss Rodgers following thrilling wins over Manchester United and Spartak Moscow.In fact the only thing that could make it sweeter would be the news that Tielemans,...
PREMIER LEAGUE・2 DAYS AGO
CBS Sports

Champions League action returns on Wednesday on Paramount+. Juventus and Zenit will square off at 3 p.m. ET, Wednesday Oct. 20 at Saint-Petersburg Stadium as part of the ongoing Champions League group stage action. Juventus collected three points with a 1-0 win over Chelsea in their previous leg. Likewise, Zenit won 4-0 against Malmo three weeks ago. Right now, Juventus (six points) leads Group H, while Zenit (three points) is in third place in the group. Recall that only the top two teams in the group will advance to the knockout phase. We'll see if Zenit can prevent Juventus from accumulating any more points. Check back at CBSSports.com to keep track of this and all the UEFA Champions League events.
UEFA・6 DAYS AGO
NJ.com

Arsenal, led by forward Pierre-Emerick Aubameyang, faces Aston Villa in an English Premier League match at Emirates Stadium in London, England, on Friday, October 22, 2021 (10/22/21). Fans can watch the match for free via a trial of fuboTV. Here’s what you need to know:. What: English Premier League. Who:...
PREMIER LEAGUE・4 DAYS AGO
NJ.com

Tottenham, led by French goalkeeper Hugo Lloris, faces Vitesse in a UEFA Conference League match at the GelreDome in Arhem, the Netherlands, on Thursday, October 21, 2021 (10/21/21). Fans without cable can watch the match for free via a trial of fuboTV or Paramount+. Here’s what you need to know:
UEFA・5 DAYS AGO
Daily Mail

Liverpool are favourites to win the Premier League AND Champions League, claims Peter Crouch... while Joe Cole insists only injuries will hold Jurgen Klopp's men back from silverware after win at Atletico Madrid

Liverpool are favourites to complete an historic Premier League and Champions League double, according to former striker Peter Crouch. The Reds made it three Champions League Group B wins out of three after Mohamed Salah's double either side of Naby Keita's strike saw them beat Atletico Madrid - who had Antoine Griezmann sent off in the second half - in the Spanish capital.
PREMIER LEAGUE・7 DAYS AGO
The Independent

England host Northern Ireland in a historic fixture at Wembley Stadium this afternoon in World Cup qualifying. It’s the first time the Lionesses have played a competitive fixture at the national stadium since it was reopened in 2007, having previously played two friendly matches against Germany in 2009 and 2014. Sarina Wiegman’s side opened their 2023 World Cup qualifying campaign with comprehensive victories over North Macedonia and Luxembourg last time out, with England scoring 18 goals across the two matches without conceding. Northern Ireland have also made a perfect start to Group D and are fresh off their historic qualification...
SPORTS・3 DAYS AGO